Even though this package was developed for robot self-localization and mapping, it was implemented as a generic, configurable and extensible point cloud matching library, allowing its usage in related problems such as estimation of the 6 DoF pose of an object and 3D object scanning.

Examples of launch files and videos for each use case (more examples in docs/use_cases.md): 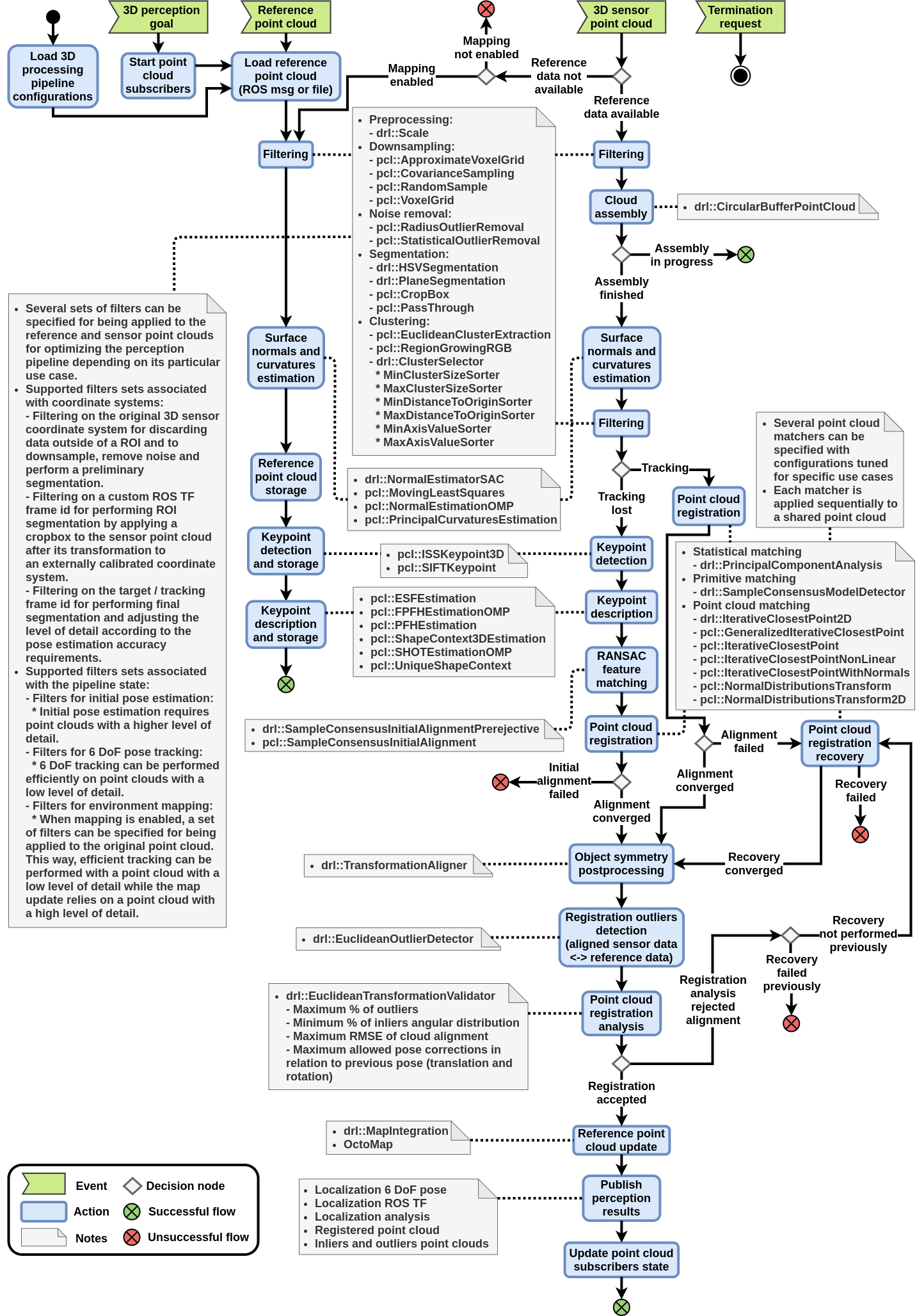 Figure 1: Overview of the data flows from the main processing stages 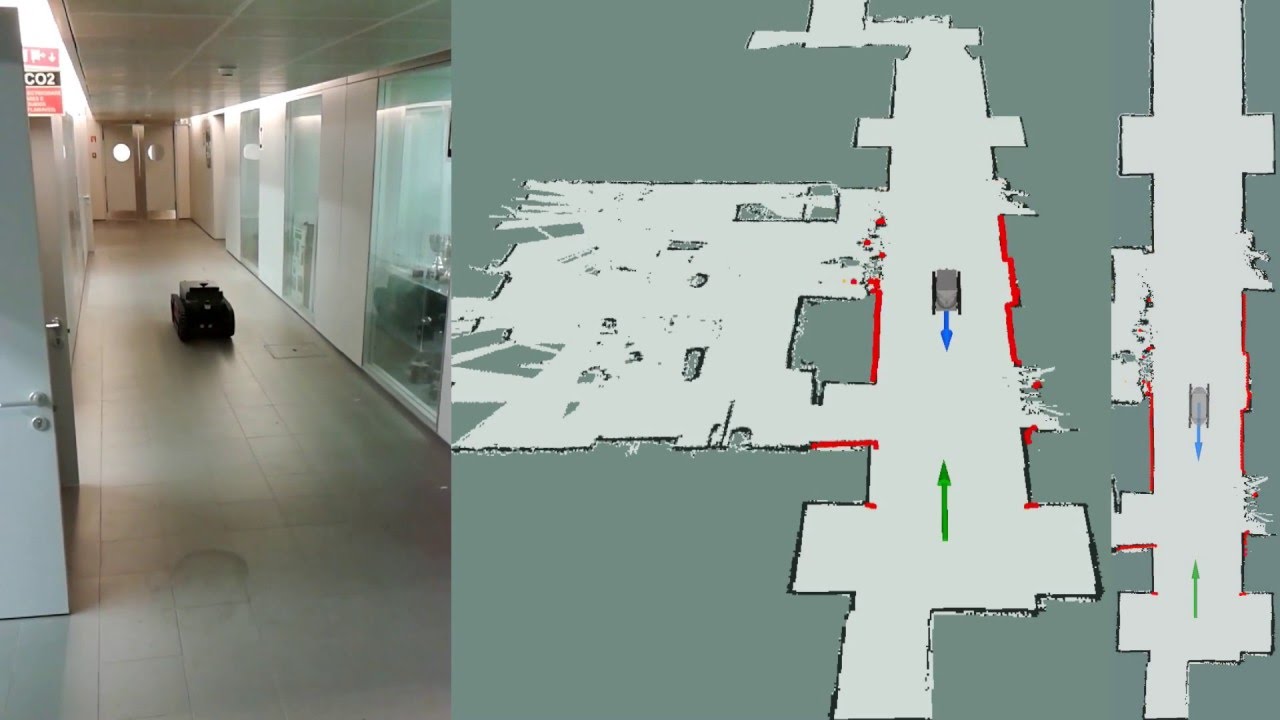 Video 1: 3 DoF localization and navigation tests with the Guardian platform in the CROB lab 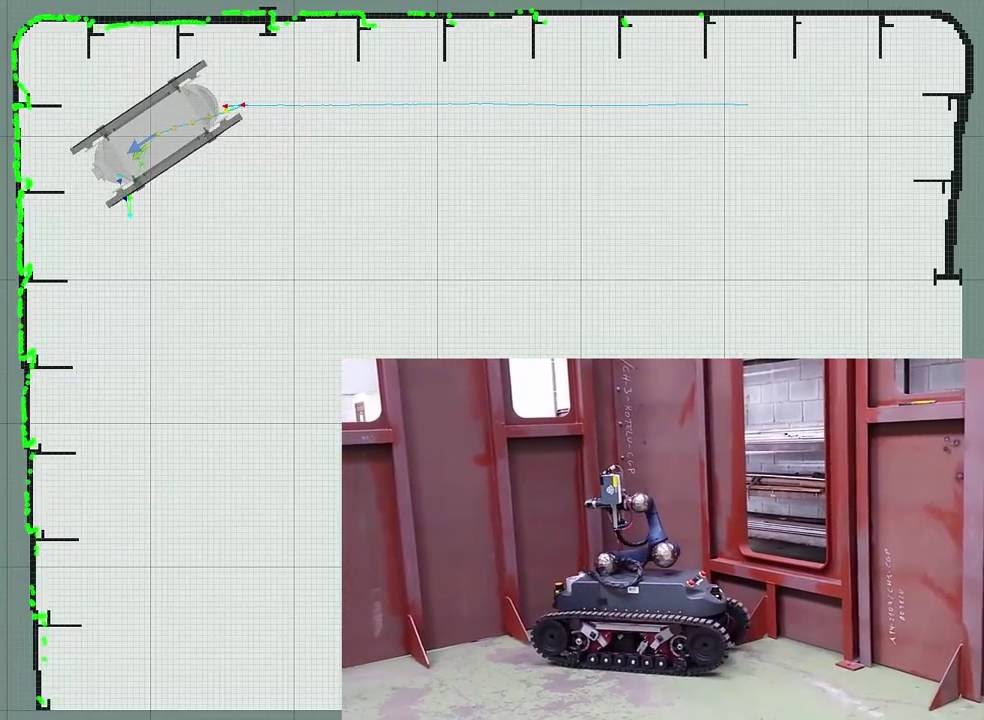 Video 2: 3 DoF localization and navigation tests with the Guardian platform in ship interior 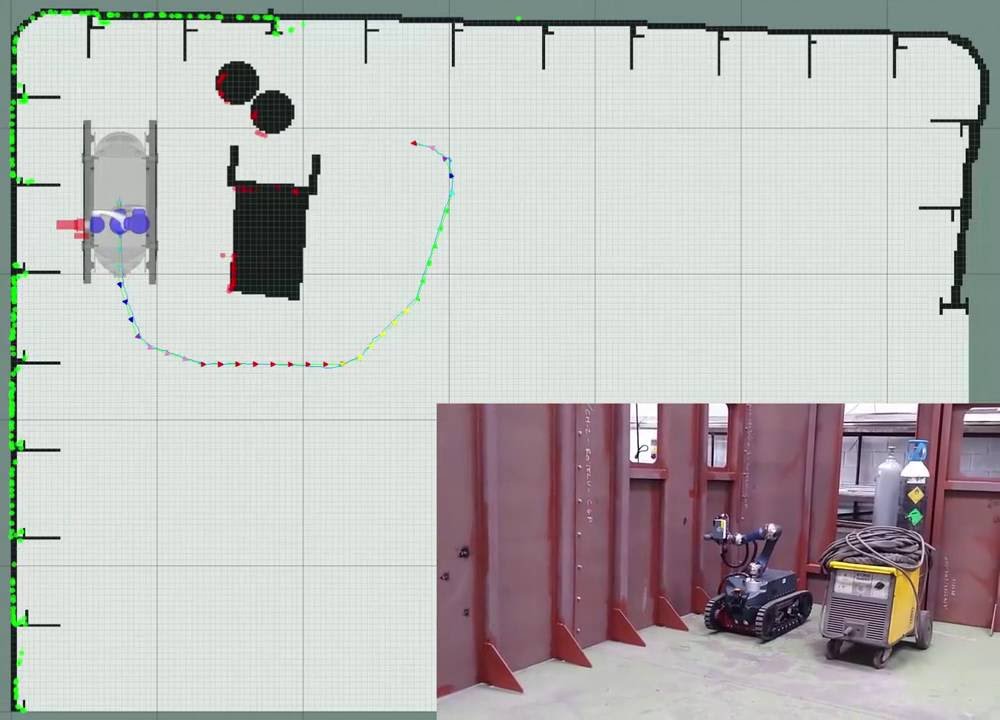 Video 4: 3 DoF localization system tests with the Jarvis platform in the CROB lab 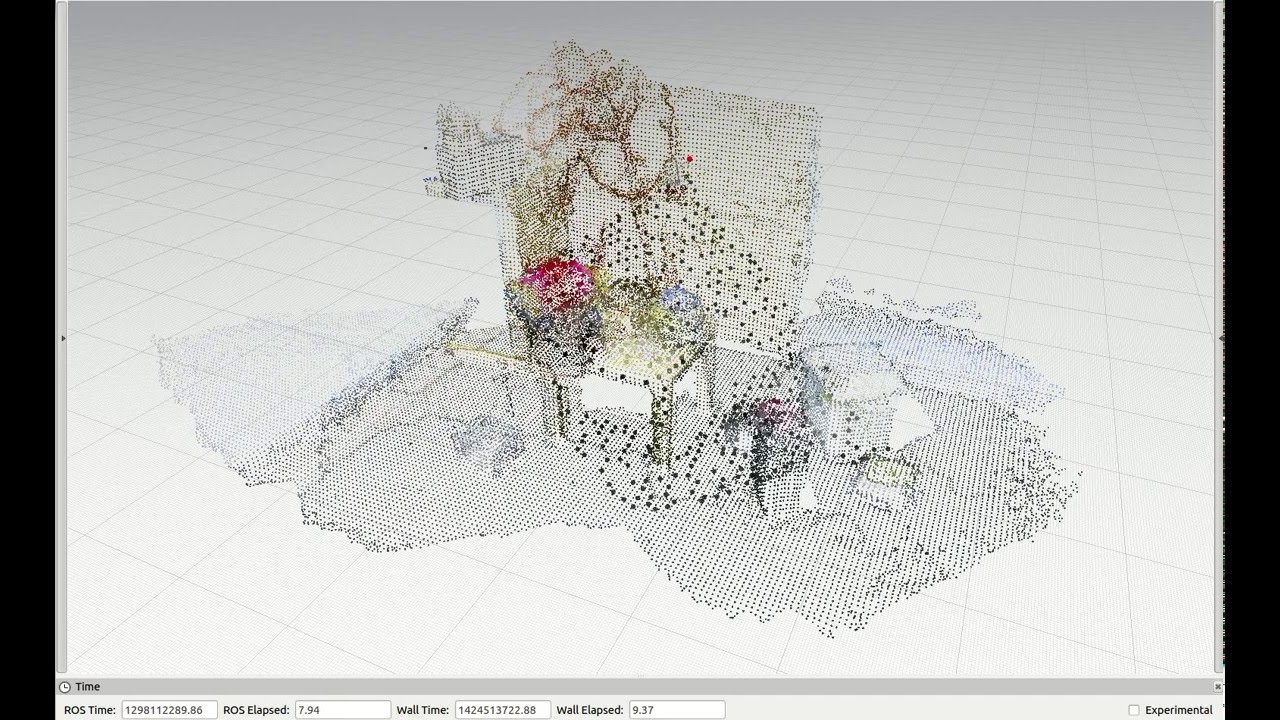 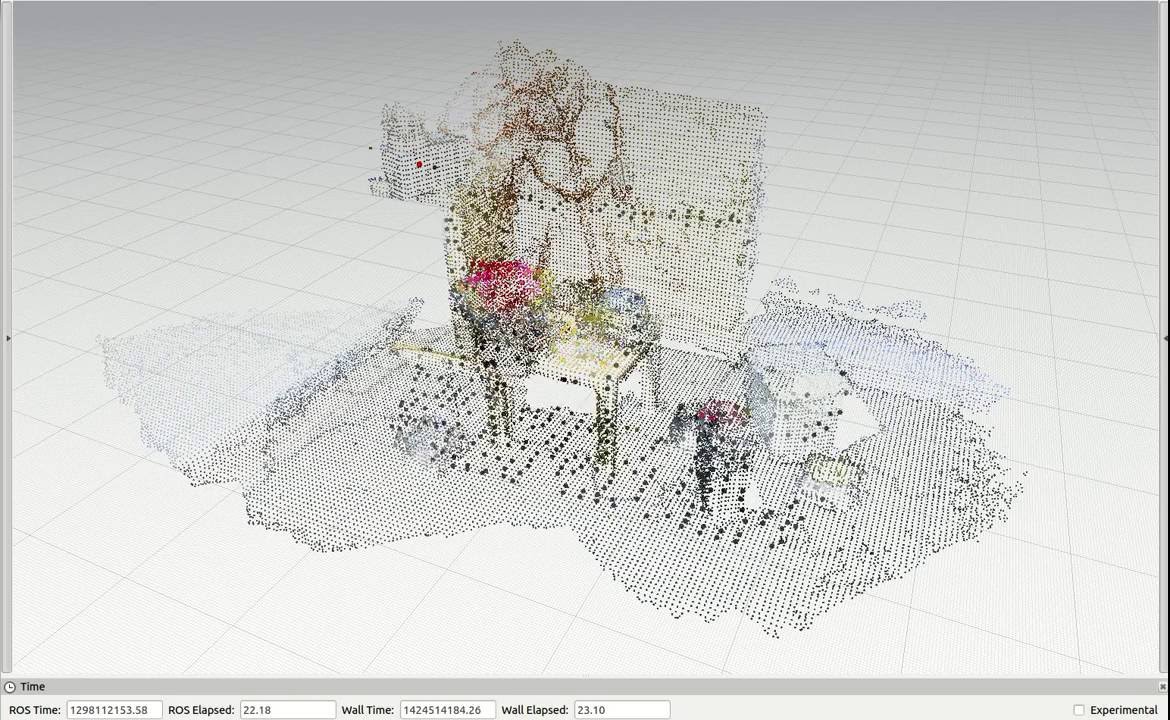 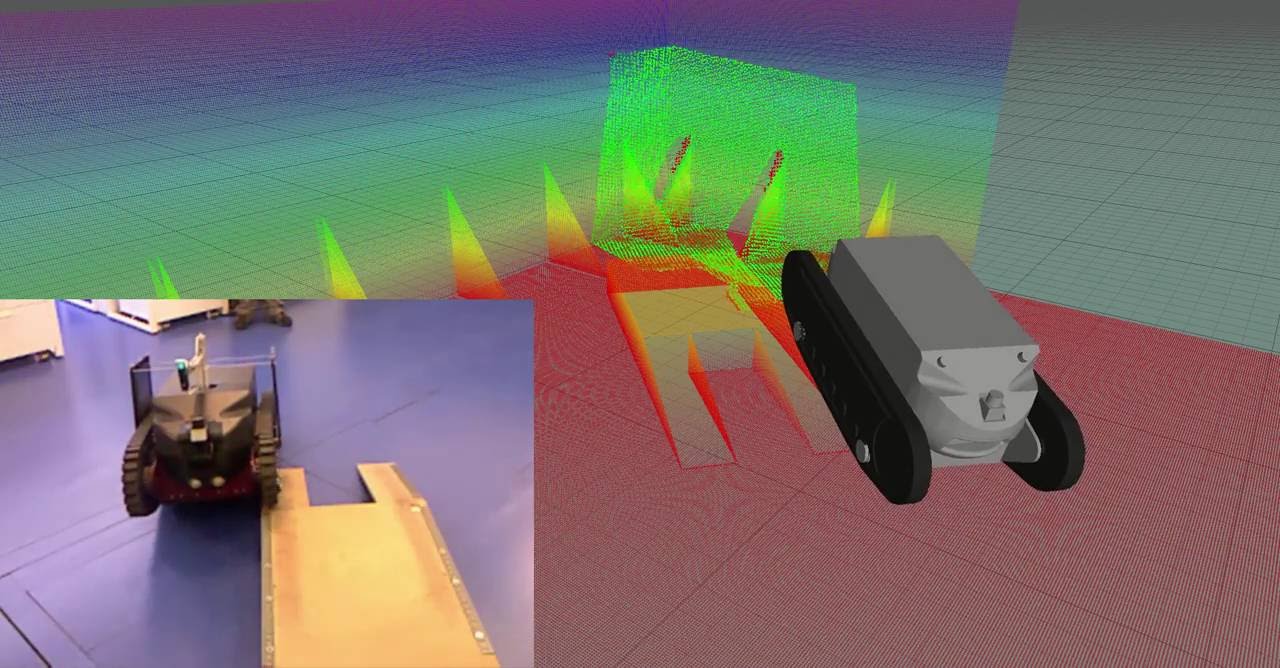 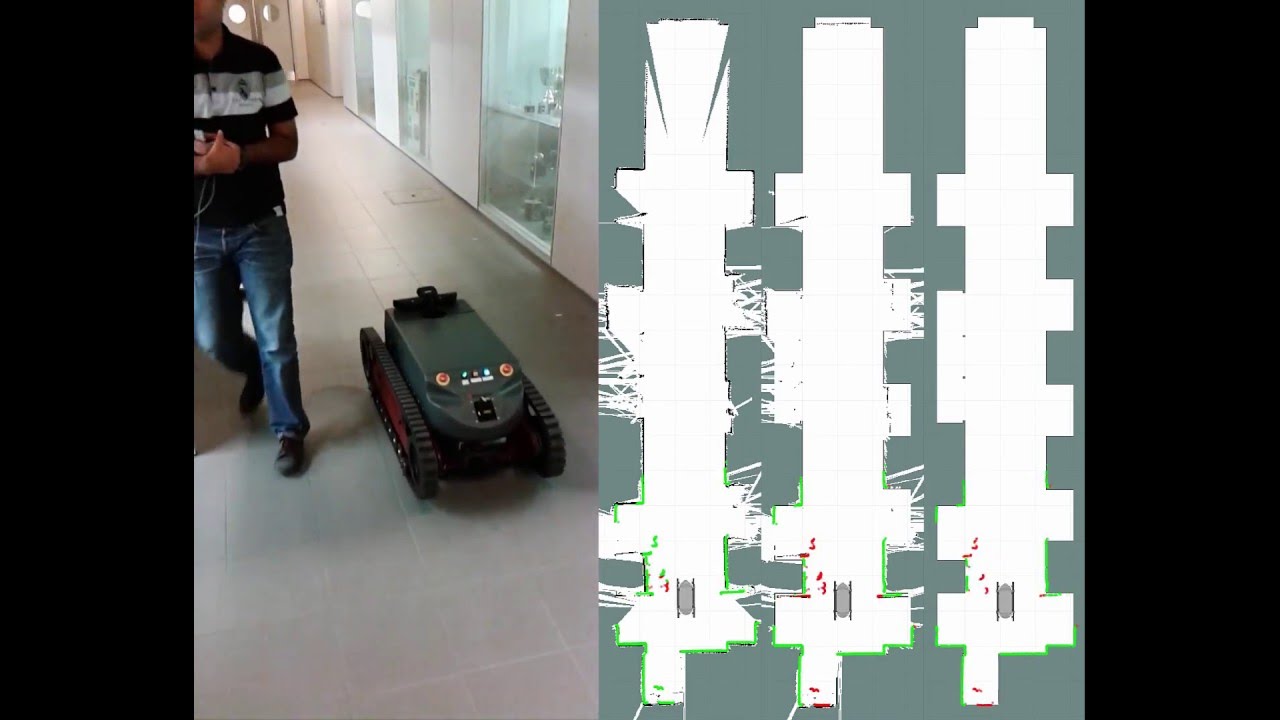 Video 9: Mapping with the Guardian robot in the lab using the 3 DoF localization system 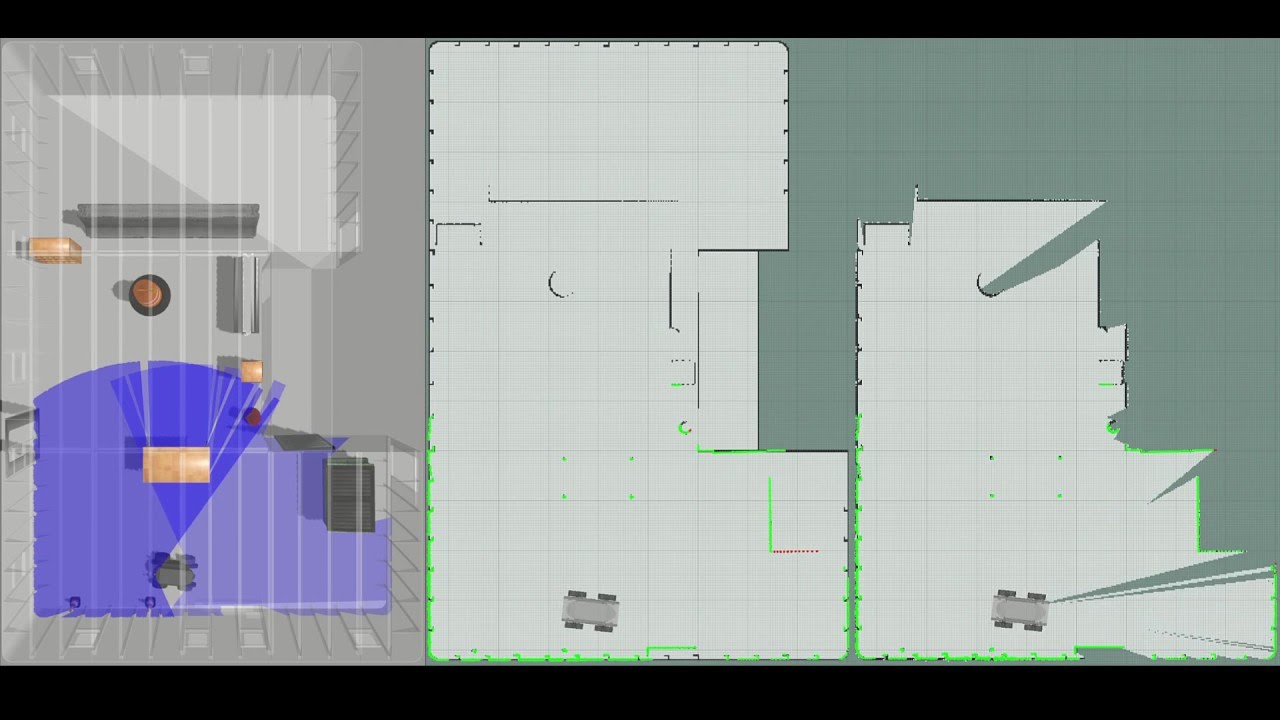 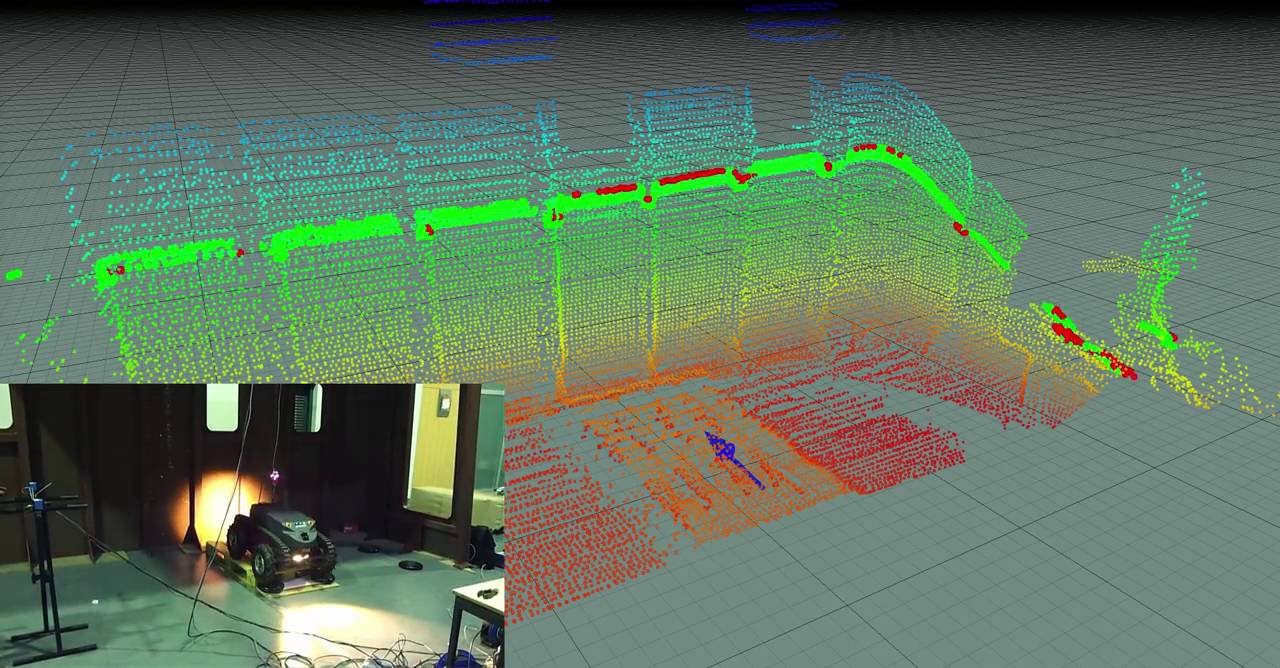 Video 11: Mapping with the Guardian robot in a ship interior using the 6 DoF localization system 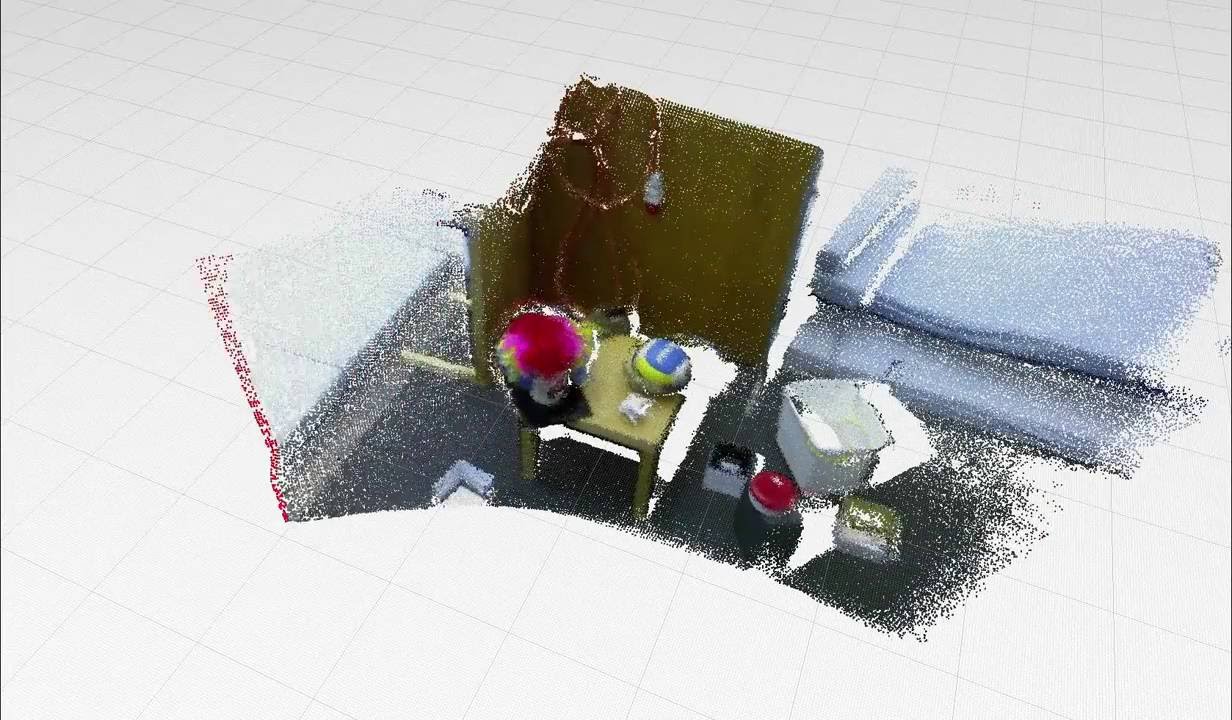 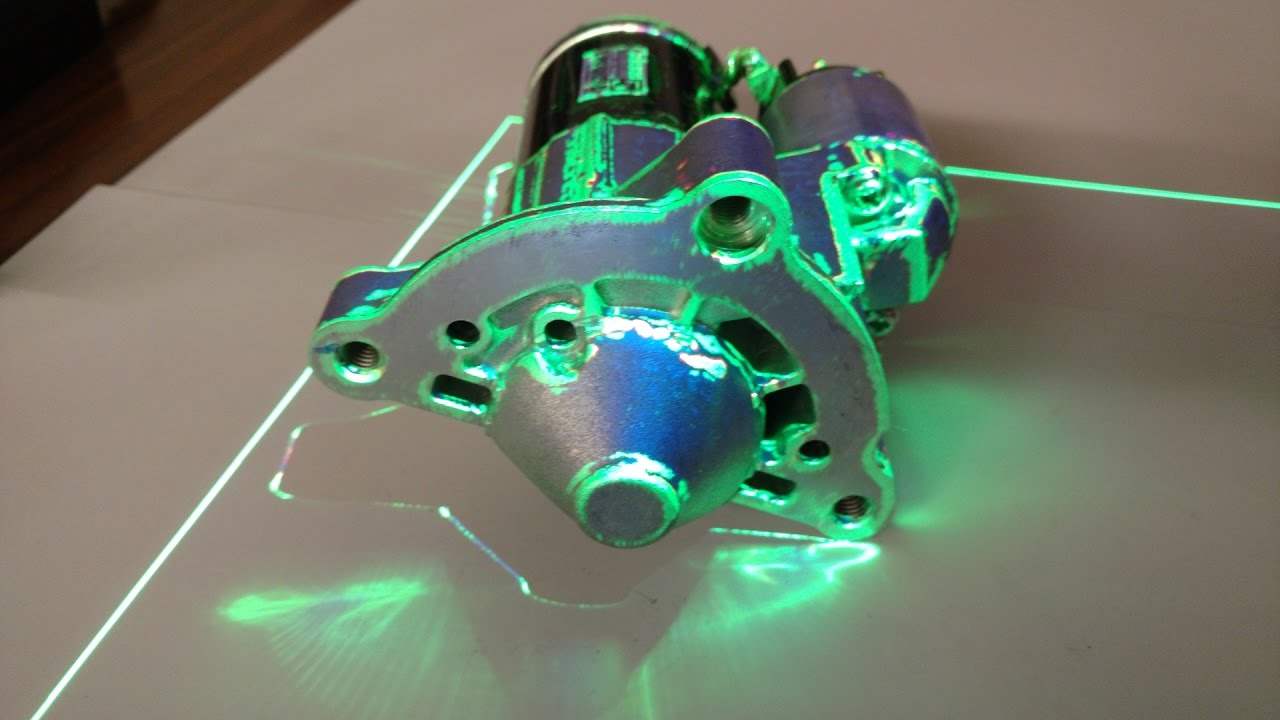 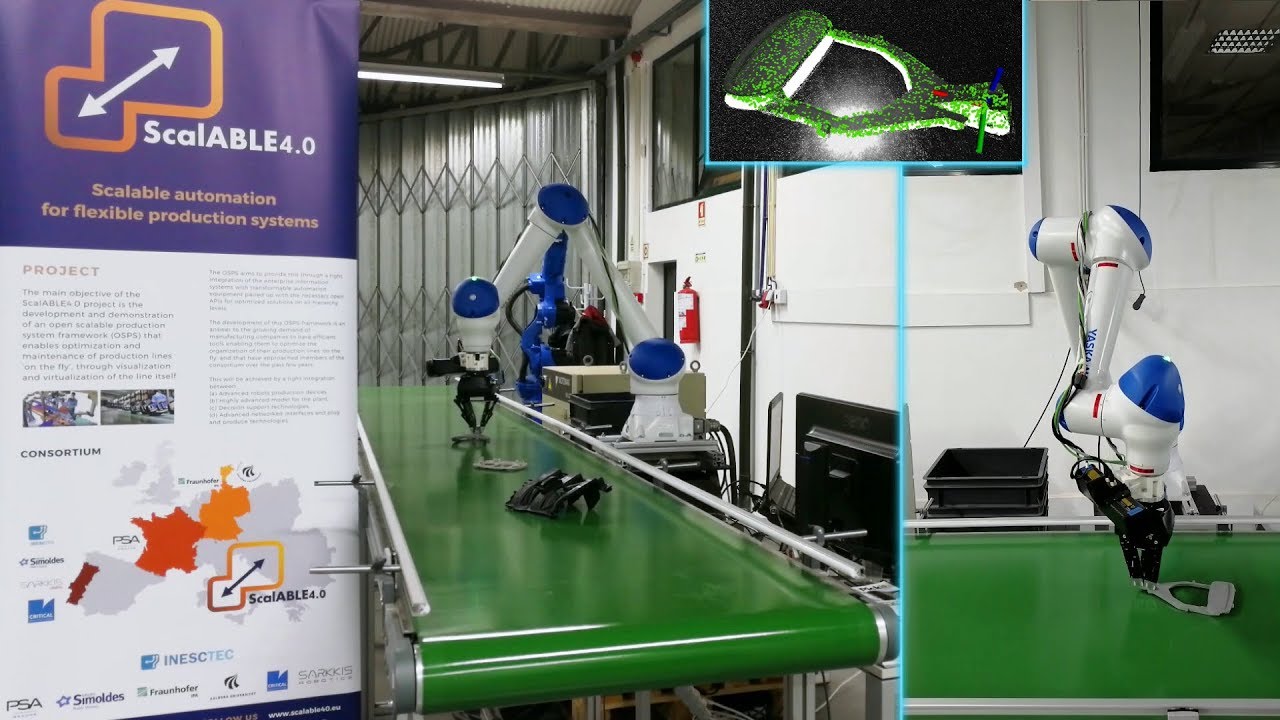 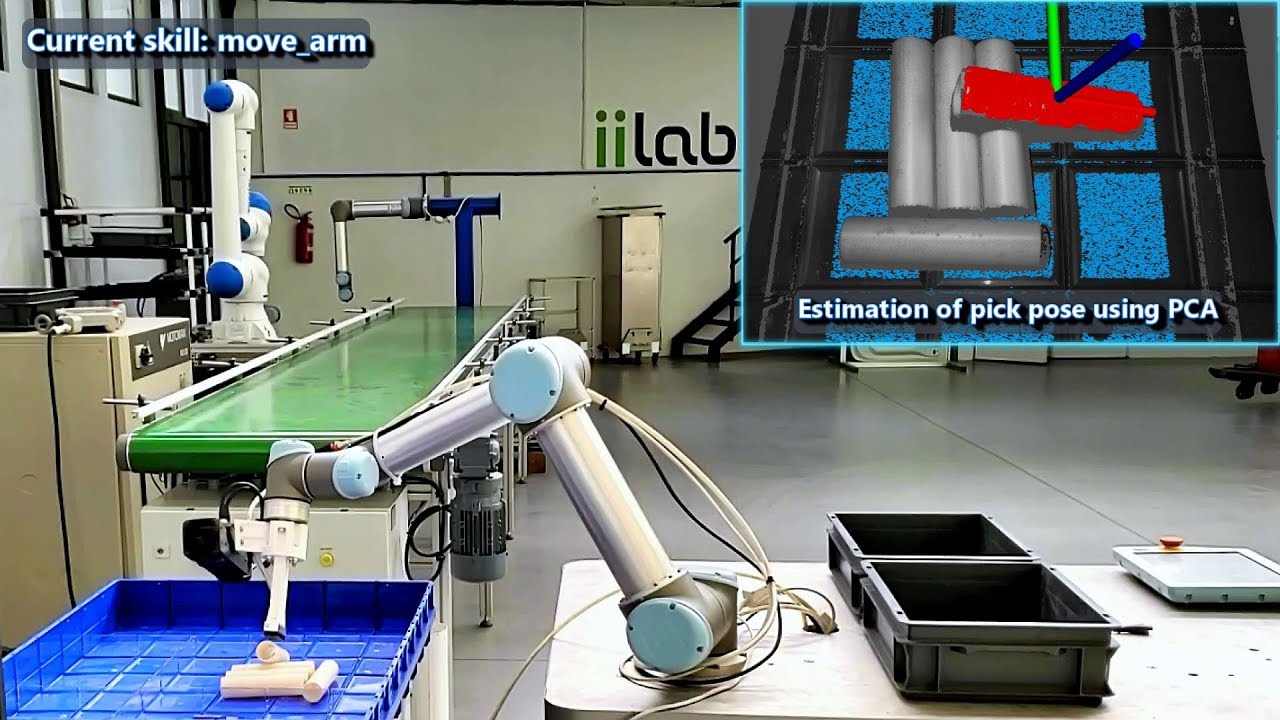 The localization system can operate with any type of sensors that provide point clouds. As such, it can use any number of laser sensors (by using the laserscan_to_pointcloud package) or RGB-D / ToF cameras.

The reference map can be provided to the localization system from:

To avoid unnecessary overhead, it should be provided has pointcloud (.ply | .pcd) for fast loading.

Be aware that the mesh / pointcloud given to drl should have +- uniform point density over its surfaces for the point cloud registration algorithms to work properly. Please read docs/mesh_tessellation.md, that details how to achieve this.

For pose tracking it can use several variants of the Iterative Closest Point algorithm and also the Normal Distributions Transform (NDT). Moreover, pose tracking can have two configurations. One tuned for the expected operation conditions of the robot and another able to recover from odometry estimation problems (the system can operate without odometry).

This gives the possibility to have a configuration that can perform pose tracking with the minimum amount of computational resources required (such as point-to-point ICP) and a more robust (and computational expensive) configuration to handle temporary tracking problems (such as point-to-point non linear ICP, point-to-plane ICP, generalized ICP). Examples of the localization pipeline are available at dynamic_robot_localization/yaml/configs

The localization pipeline allows the attachment of transformation validators before publishing pose estimations.

They can be used to suppress estimations that are not plausible for a given robot operation conditions.

If the tracking methods can't recover after a given amount of sensor updates / time, the initial pose estimation (using features) can be activated.

Dynamic map update can be performed with / without surface reconstruction and can also be coupled with the OctoMap package in order to perform probabilistic point cloud integration (useful for dynamic environments in which large objects may appear / disappear),

The localization system can be started with dynamic_robot_localization_system.launch

This launch file starts the nodes:

The localization is integrated with other ROS nodes by publishing TF transforms between map and odom frames (configurable frame names) using the pose_to_tf_publisher node.

The TF is published in a separate ROS node to ensure that the system remains operational and with constant TF publish rate even if the localization node has variable computational time.

Moreover, in the remote case that the localization system crashes (by lack of system resources, programming error in the localization node or in one of its external libraries), the system can remain operational using only odometry for a given amount of time (i.e. TF messages can be published continuously, with a timeout counted after the last valid pose estimation or one message for each pose estimation) and the localization node can be automatically restarted (has node respawn activated) without any impact in the rest of the system.

The dynamic_robot_localization node publishes in latched topics (if required, as the publish of these messages can be disabled to reduce consumption of system resources):

After installing and setting up ROS, the installation of this package can be done from pre-compiled debian files or from source.

In the future, I will release drl into the ROS build farm, making it easier to install (using apt).

drl and its dependencies are available in pre-compiled debian files available in the releases tab of the associated github repositories.

For installing from the debian files:

If your OS or ROS distribution does not yet have pre-compiled debian files of drl, you can follow this tutorial for generating then once, and then you can quickly and easily install drl and its dependencies in other machines (with the same OS and ROS distribution).

If you want the latest developments, you need to compile drl (and its dependencies) from source using the installation scripts in the install folder.

The install.bash script will execute the following accompanying scripts in this order:

On the other hand, wstool can be used since the c_repositories.bash added the repositories to the .rosintall file