fMRIflows is a collection of fully autonomous uni- & multivariate fMRI processing pipelines. This comprises anatomical and functional preprocessing, estimation of singal confounds, as well as univariate and multivariate analysis on the subject and group level.

As is rather obvious, fMRIflows was greatly inspired by fmriprep and other open source projects and borrows strongly from their ideas and solutions. But while fmriprep can be described as a "glass" box software, fMRIflows is more like a shoebox. Simple to open, easy to understand what's inside and uncomplicated to replace and change components inside. This is all due to the fact that all the source code of fMRIflows is stored within the notebooks.

If you are using fMRIflows in your publication, please contact the author Michael Notter to get further information about how to cite this toolbox, as the publication is currently in preparation for submission.

The best way to use fMRIflows is to run it directly within the corresponding container (Docker or Singularity). The docker image for this can be downloaded from Docker Hub with the command docker pull miykael/fmriflows, and can be run with the command:

Note: Should you by any chance encounter a web page that asks you for "Password or token", use the token fmriflows to login.

It is also possible to run fMRIflows outside of a container. All the important code is stored within the notebooks. But for this, you need to make sure that all necessary neuroimaging and python dependencies are installed on your system. For a list of what needs to be done, see the generating file.

fMRIflows contains many different pipelines. The following is a short summary and explanation of each individual notebook.

The notebook 01_spec_preparation.ipynb helps you to create the JSON files that contain the specifiation to run fMRIflows. This is the most direct way to specify the processing parameters for fMRIflows. Open the notebook, run it, change a few parameters as you want and you're good to go. Alternatively, you can also directly change the JSON specification file within your dataset folder (but you need to run 01_spec_preparation.ipynb for this to work at least once).

The notebook 02_preproc_anat.ipynb contains perform anatomical preprocessing. Parameters that can be specified in the fmriflows_spec_preproc.json file are the following:

The simplified workflow of the anatomical preprocessing looks as follows: 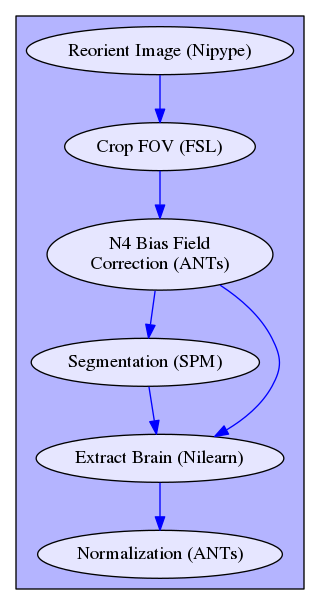 After anatomical preprocessing the following output figures are generated:

This panel shows quality of the T1-weighted image segmentation, with brain tissues highlighted in green for Gray Matter (GM), in beige for White Matter (WM) and in blue for Cerebrospinal Fluid (CSF). 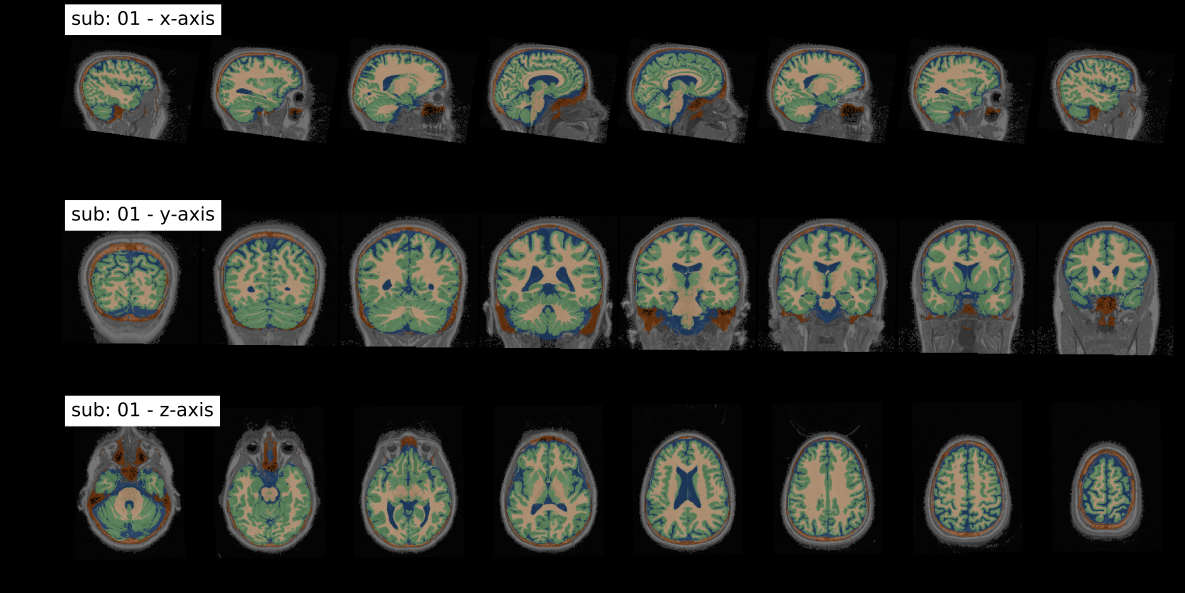 This panel shows the quality of the brain extraction. The brain highlighted in red is overlayed on the subject specific T1-weighted image in gray. 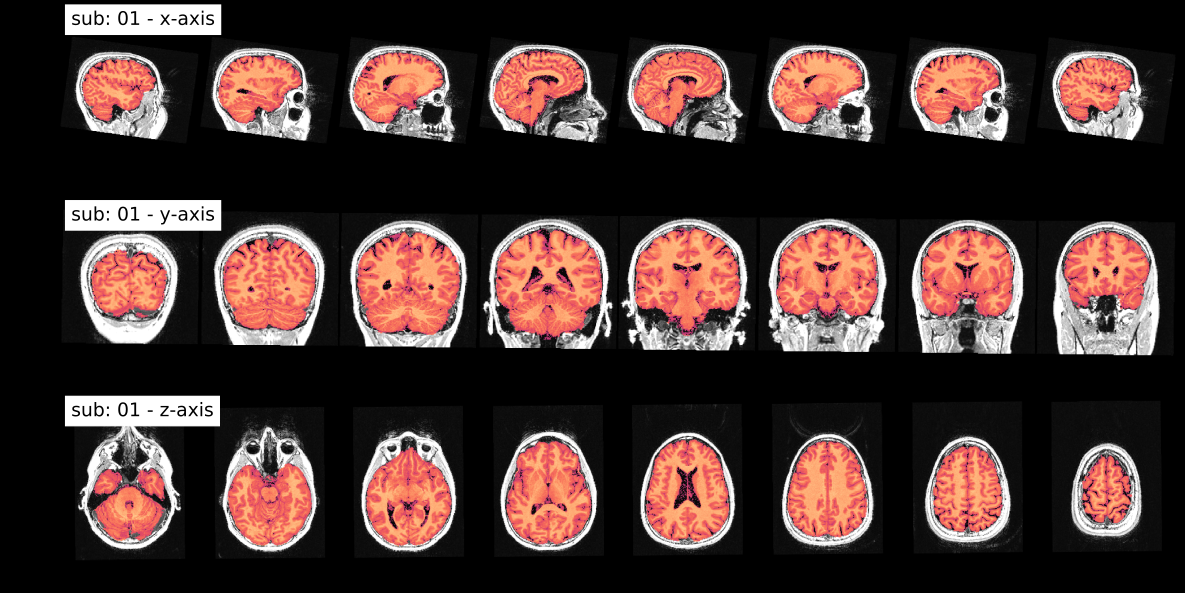 This panel shows the quality of the nonlinear template registration. The normalized brain highlighted in yellow is overlayed on the ICBM T1-weighted template image in gray. Regions in red and blue show negative and positive deformation discrepancy between the normalized subject image and the template. 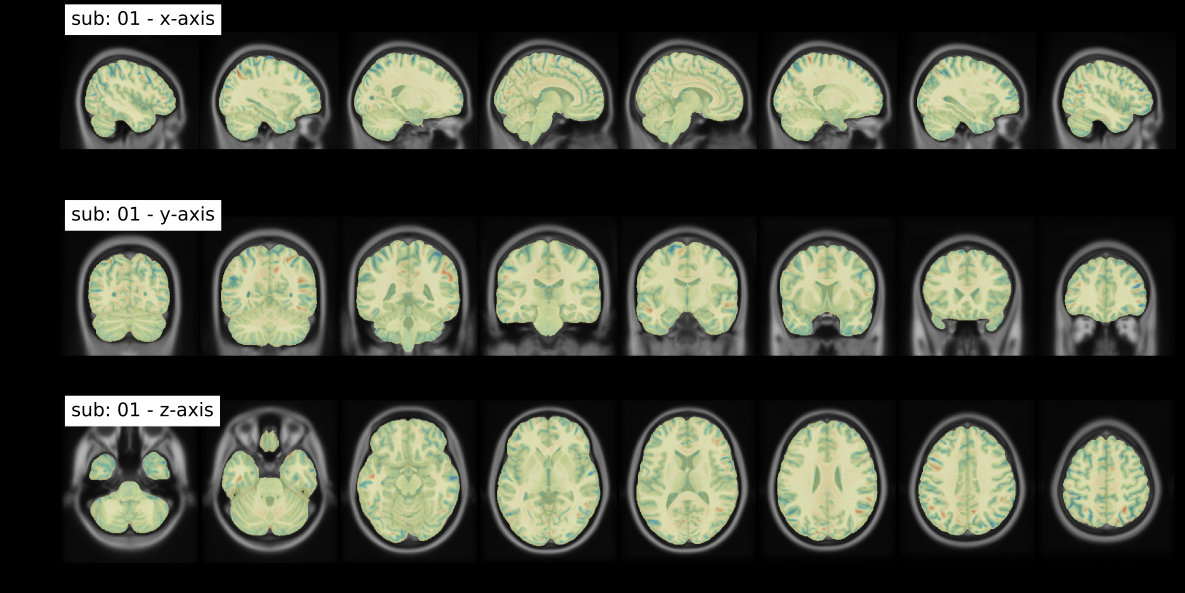 The notebook 03_preproc_func.ipynb contains perform functional preprocessing. Parameters that can be specified in the fmriflows_spec_preproc.json file are the following:

The simplified workflow of the anatomical preprocessing looks as follows: 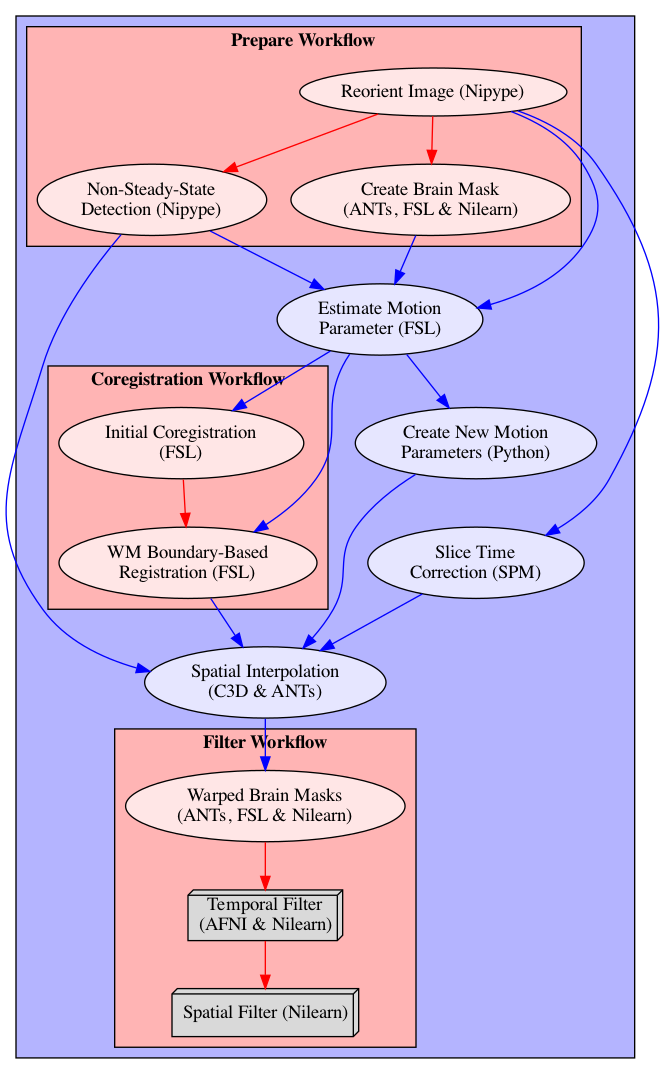 Additionally to the preprocessing, the following signal confounds are computed:

After functional preprocessing the following output figures are generated:

This panel shows the mean functional image in gray, and the brainmask (red) that was used to compute DVARS and the temporal (green) and anatomical (blue) CompCor mask. 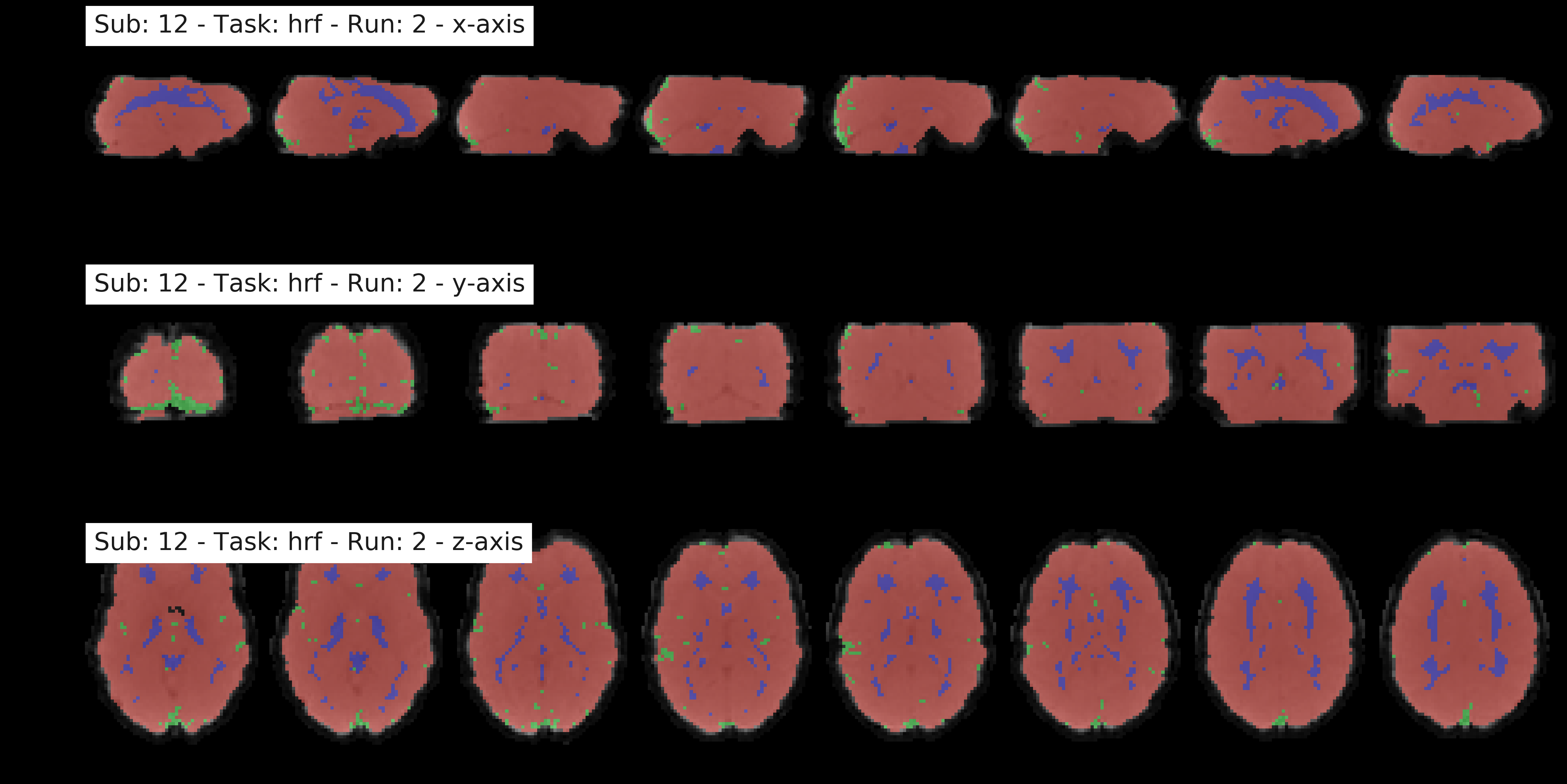 This panel shows the signal for (almost) every voxel (y-axis), over time in volumes (x-axis). The panel shows voxel in the gray matter (top part), white matter (between blue and red line) and CSF (bottom section). The data was standardized to the global signal, and ordered within a given region according to correlation coefficient to the average signal. 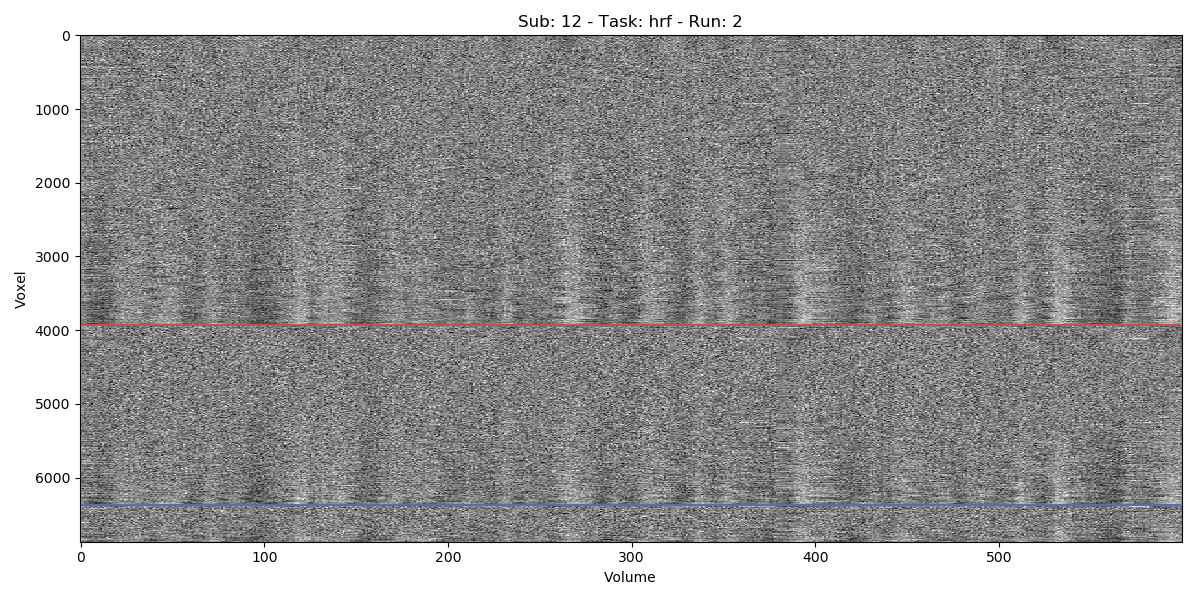 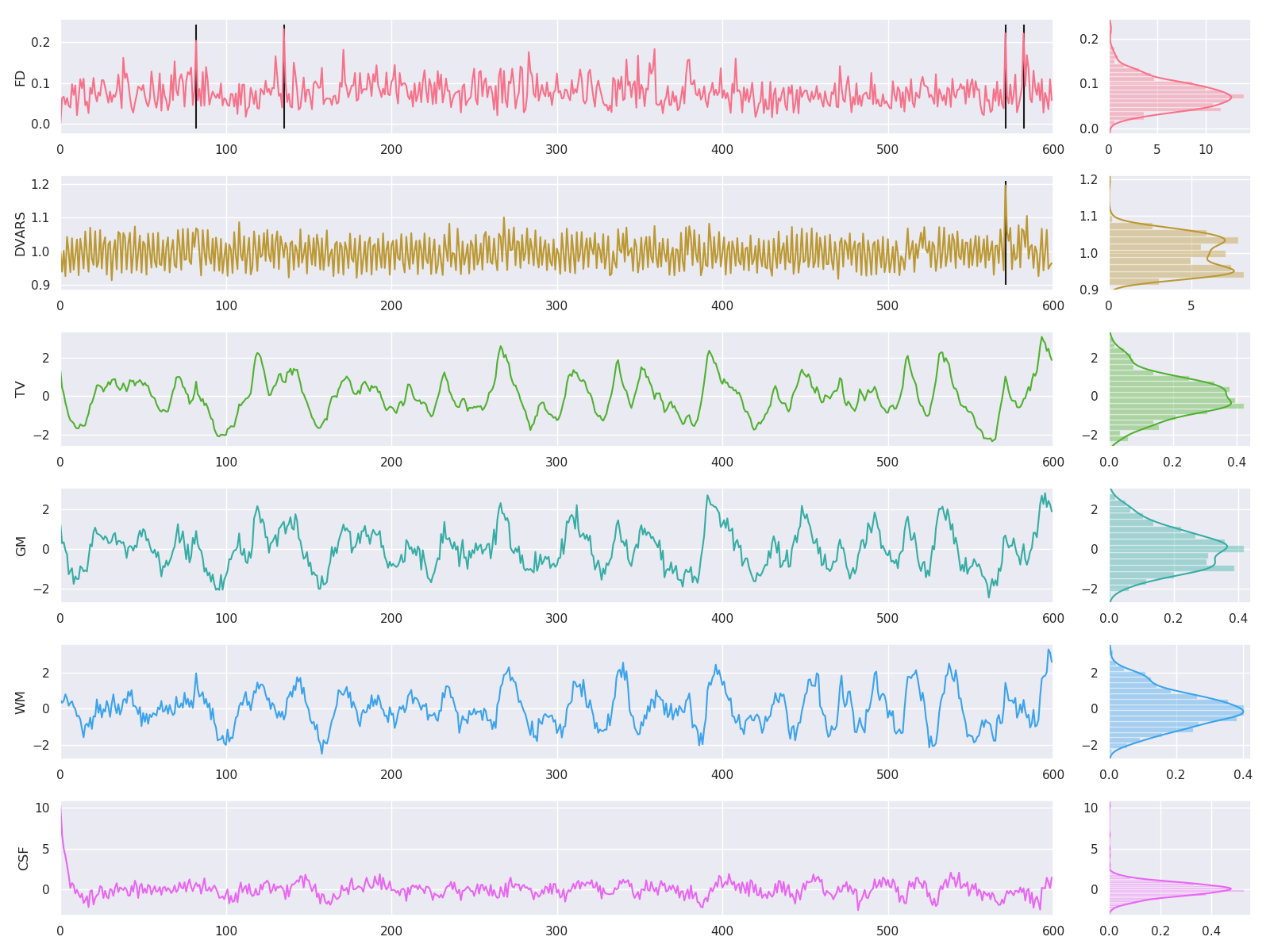 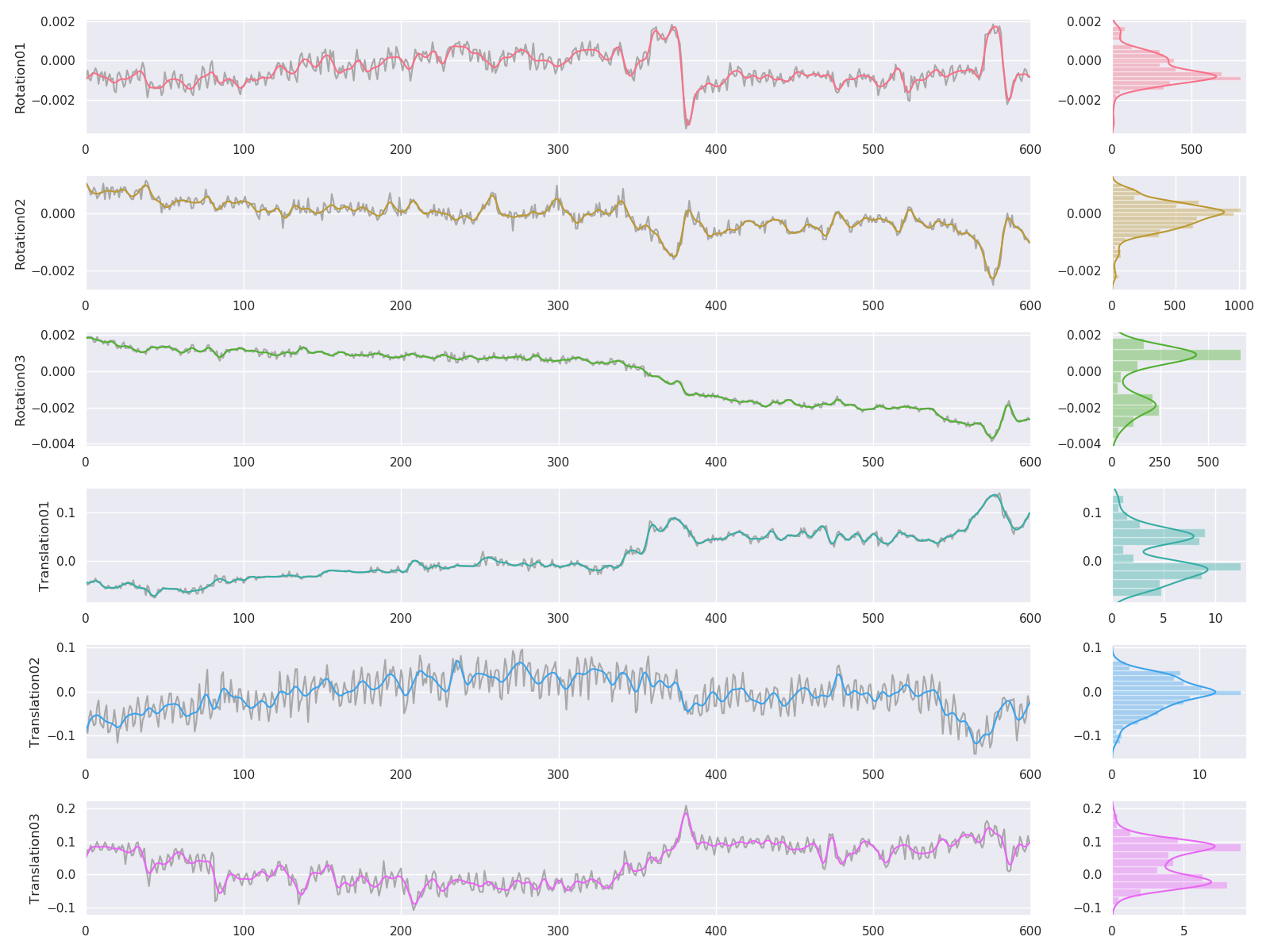 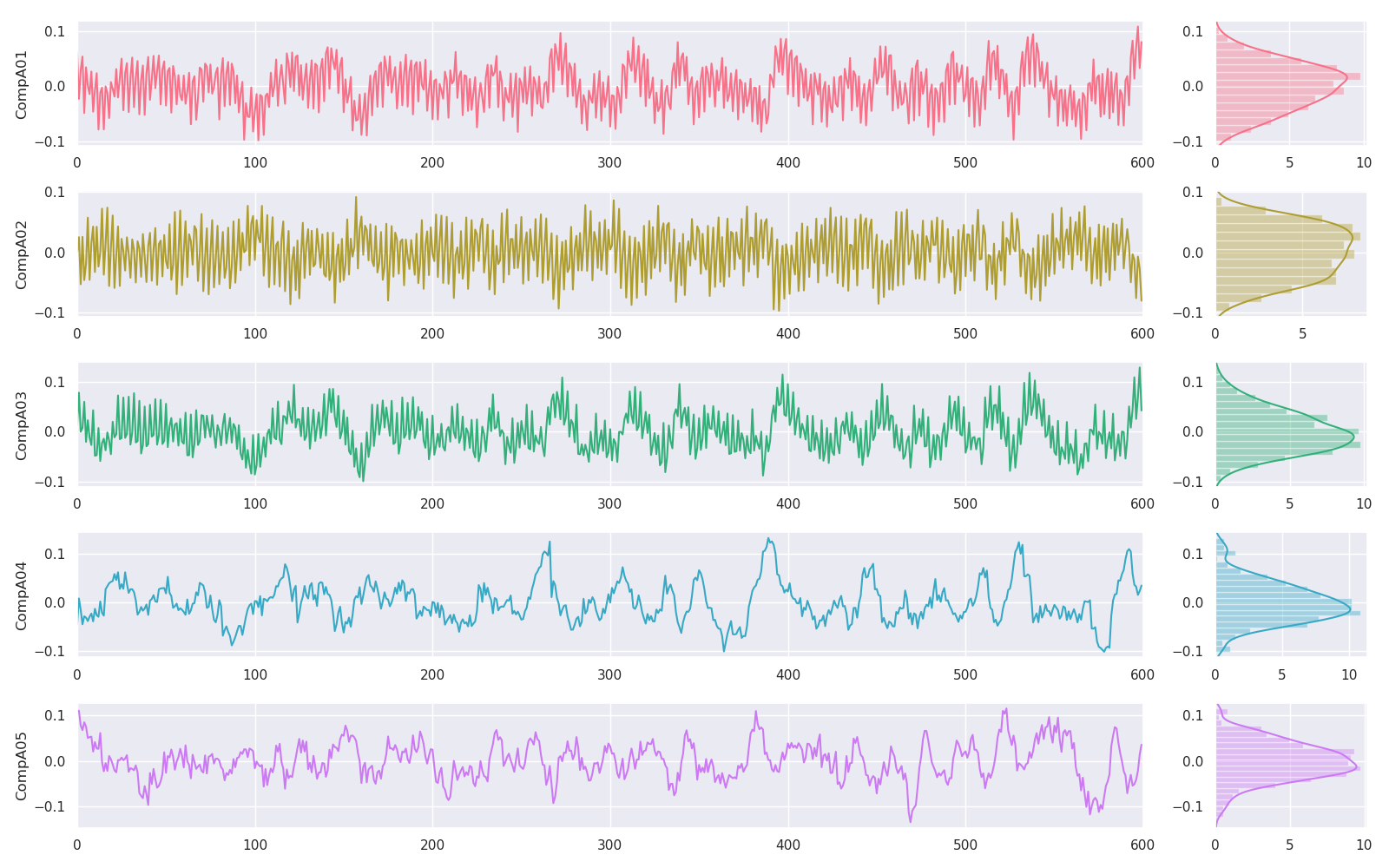 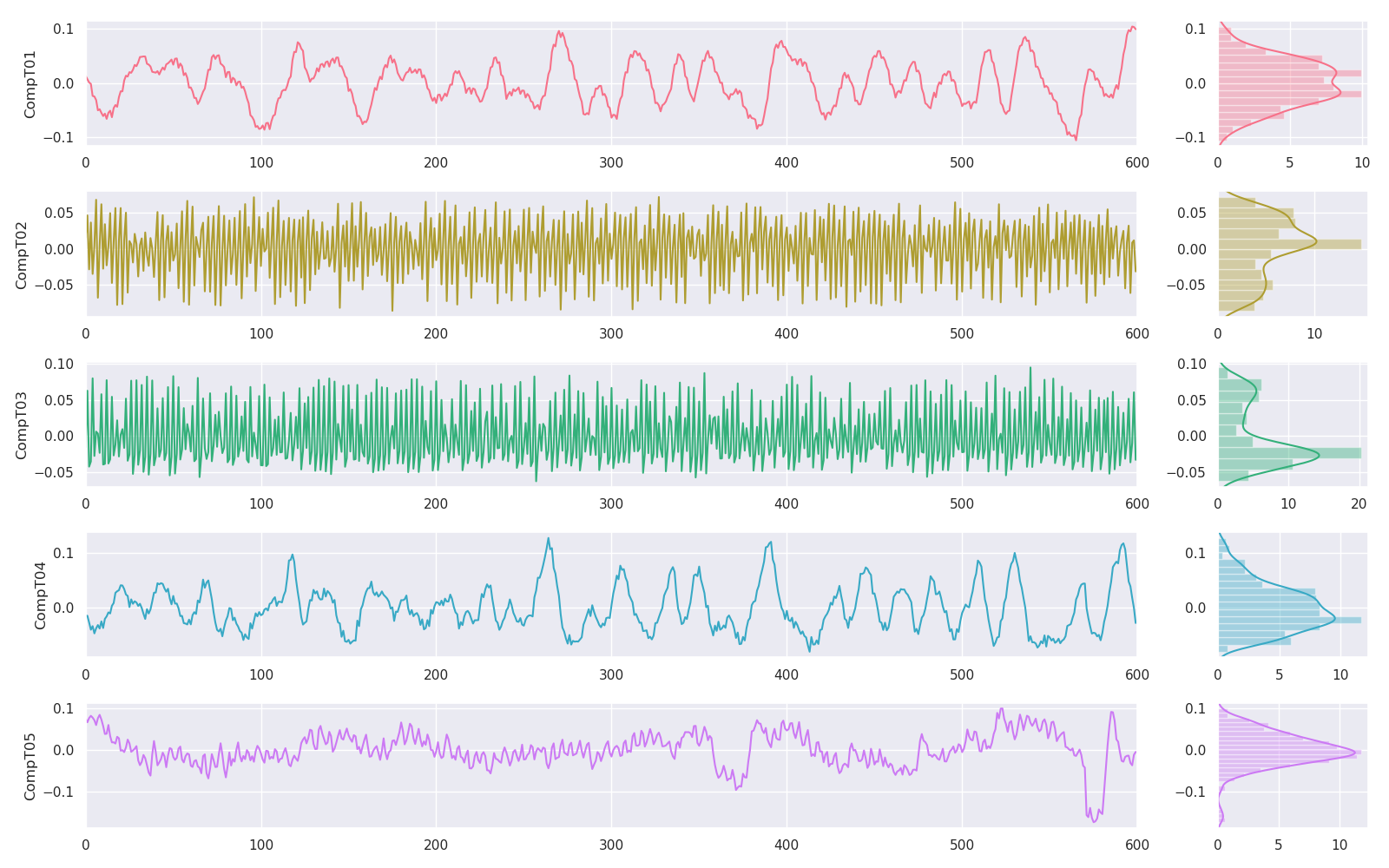 This panel shows the ICA components. Left side of the figure shows the correlation between the component and the functional image, over time. The right panel shows the power spectrum density of this component, with values in Hz on the x-axis. 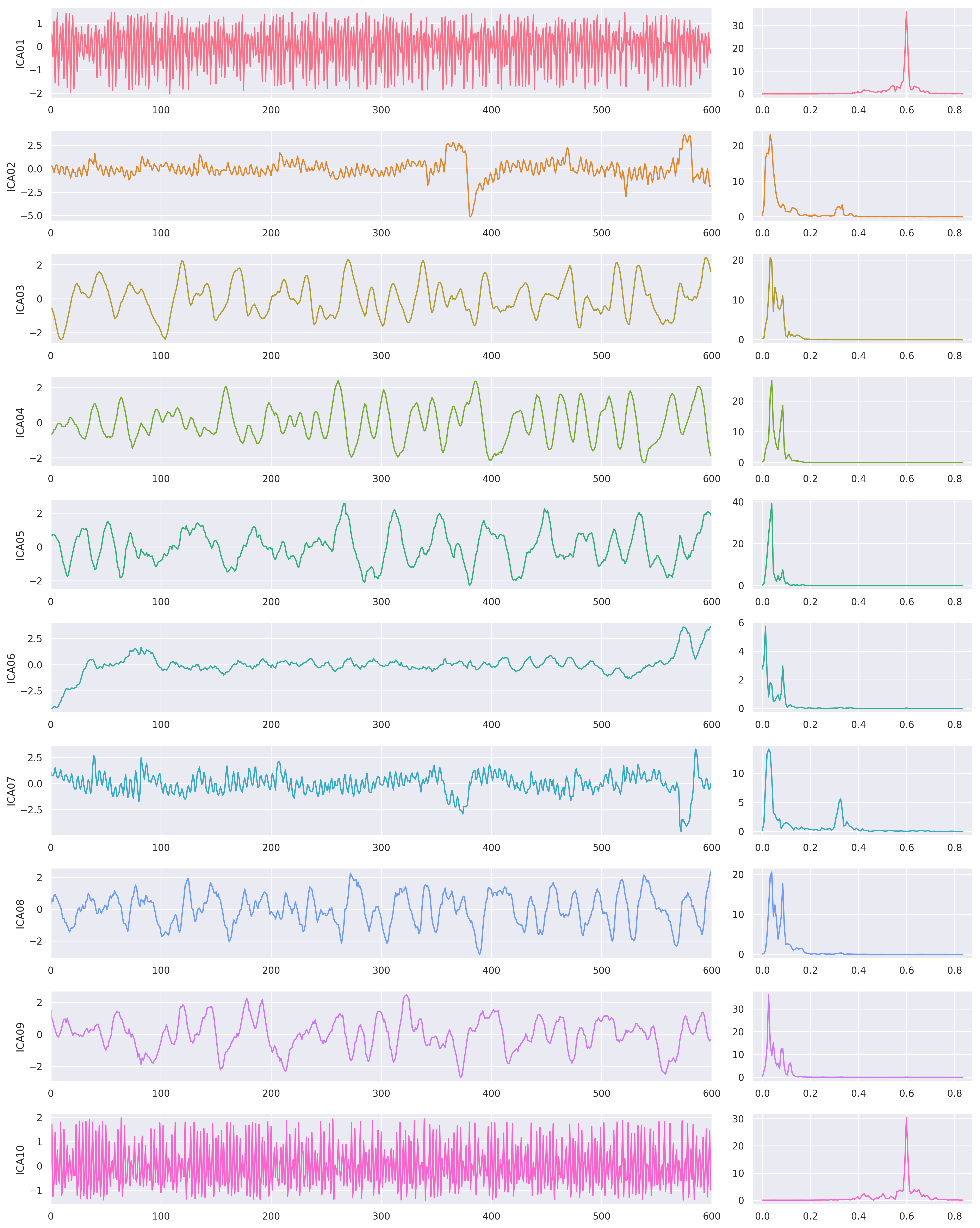 This panel shows the load of the ICA components within the brain volume. 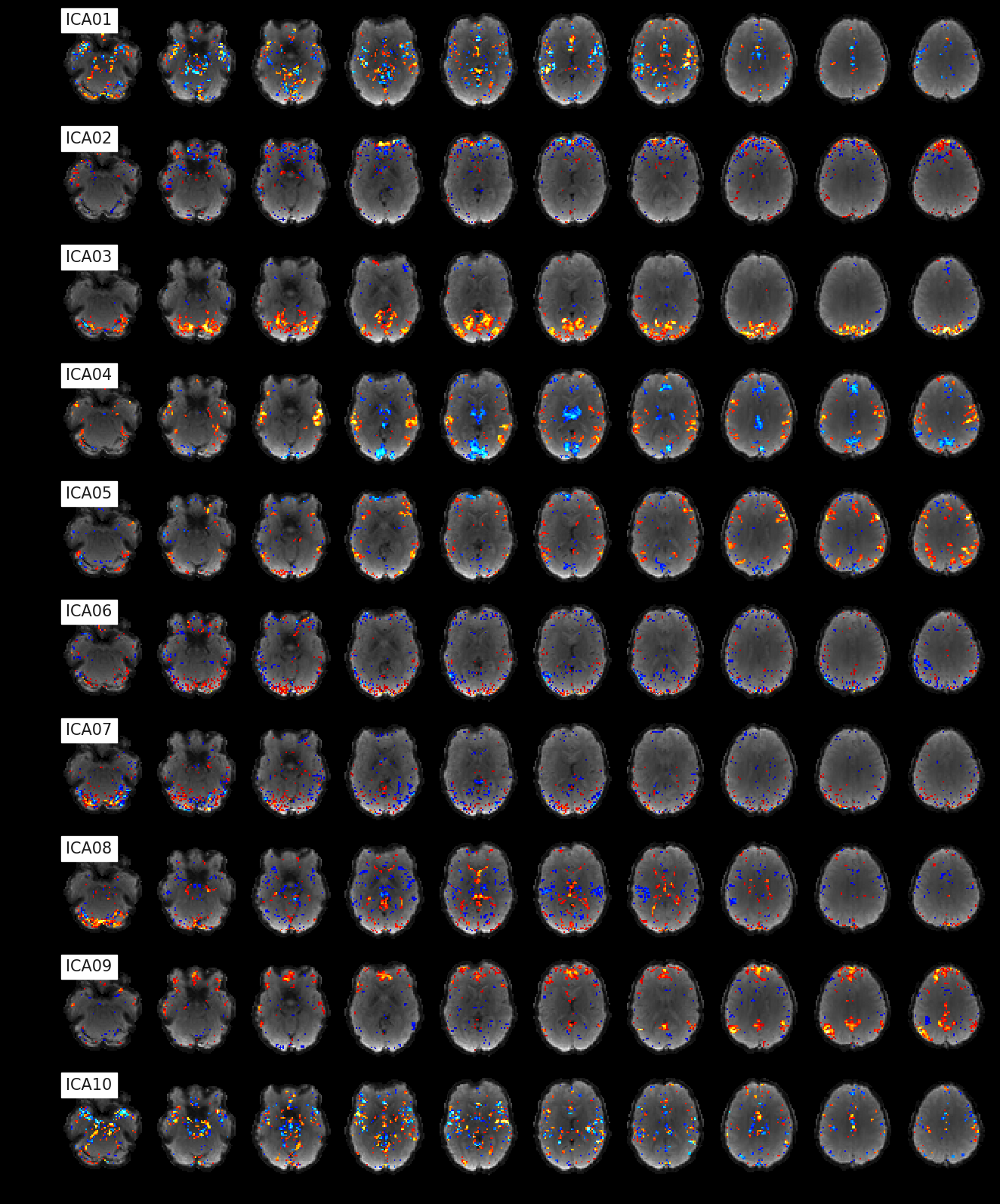 If you want to help with this project or have any questions, fell free to fork the repo, send us a pull request or open a new issue on github. Every help is highly appreciated, every feature request or bug report is very welcomed.

We would like to thank everybody who's developing code for Nipype, fmriprep, Nilearn, PyMVPA and many other related open-source toolboxes. We were able to integrate their knowledge, code and approaches in fMRIflows, because their code is open.

Thanks also to all the contributors, tester, bug reporter and feedback giver to fMRIflows. And a special thanks to Faruk who created the great fMRIflows logo.