This repository contains the necessary code to reproduce the results presented in GTC (Israel) 2018 talk and paper "Reinforcement learning with A* and a deep heuristic". Aleph-Star is the main algorithm described in these presenations.

This repository is not yet in the form of a Julia package (this is WIP), but it is fairly general and can easily be used with different environments.

It is an A*-like algorithm but using a learnable heuristic. The problem of finding the minimal cost path between two nodes on a graph can be formulated as a decision process where at every visited node an optimal action has to be taken minimizing the total accumulated cost. Replacing cost by reward, any such algorithm that generates cost minimizing actions generates reward maximizing actions thus becomming a candidate solver for Markov Decision Processes (MDPs). A* is such a cost minimization algorithm that takes advantage of domain knowledge in the form of a heuristic function; it is interesting because for certain conditions (admissablility and consistency of the heuristic) it converges to the optimal solution while visiting a minimal number of nodes, i.e. no other similar algorithm (equally informed) could perform better. No such proof exists for Monte Carlo Tree Search (MCTS). In Aleph-Star the rule-based heuristic of A* is replaced with a Convolutional Neural Network, the weights are learned in a Reinforcement Learning fashion by interacting with a simulated environment by taking actions, earning rewards and backpropagating action values Q_a(S) where a represents the action index and S the sensory input (itself a function of the state and the environment). The learned heuristic can be used in runtime by itself, or it can be used with the the Aleph-Star tree in a very efficient manner, with little branching. Regular methods used in Q-Learining can be applied to Aleph-Star too, for e.g. reward for exploration, smart reward clipping, target network, etc.

What can it do?

Regarding the above packages:

on Linux Dierckx needs a fortran compiler so sudo apt-get install gfortran. The ML package is Knet it requires nvcc (NVIDIA compiler from Cuda) to be in path, otherwise it will default to using the CPU thus requiring some minor modifications to the code. The IJulia package is only needed to use the Jupyter notebooks it requires a working jupyter notebook from the command line. The basic algorithm implementation (aleph_zero folder) uses only DataStructures and Nullables packages. Dierckx and DSP are used by the environment (described below), PyPlot and Plots are only used for interactive plotting of results, JLD2 is for saving the results in HDF5 format and Knet is used for ML.

Import all the relevant functions and constants into the Julia environment:

The only supplied environment is of a car following a lane. The relevant files are in the env folder. This environment generates a lane of random width, curves and cars (with a random but smooth velocity profile). Curvature, min/max width and length can be configured, to use the defaults just call state, env = initialize_simple_road() which will generate a new random lane and an initial state. All units (velocity, acceleration, time) are in MKS, angles in radians. The car uses Ackermann steering in which the wheels are not allowed to slip. Sensory input can be generated from any state with sensors = get_sensors(env, state) which in our case results in an 84x84 UInt8 grayscale-pixels image (just like the original DQN sensors) which can then be plotted by (for e.g.) heatmap(sensors, aspect_ratio=1.0) resulting in:

Instead of using multiple images (like in the original DQN paper), we encode additional information in the image itself: the background color maps to car velocity, the current steering is encoded in values of the the pixels to the left and to the right of the orange lines (which are themselfs of constant color), and the relative velocity between our car and others populating the lane (aka yolocars in the code) is encoded in the pixels of the yolocars. The sensors are relative to the car which is drawn as a triangle at the bottom center of the image (this triangle is of constant shape and position, the color is as the background).

The function state, reward, done = sim!(env, state, action) will simulate by default 5 steps of dt=100ms each (but 1000s of images per second on real time) and return the new state, a positive reward and done, indicating whether the car crashed or not. The action is composed of continuous steering and acceleration action = (steer, accel). For Q-learning the values are discretized with an index action = action_ix_to_action(env, ix) the steering (of the wheels not steering wheel) has actionc_steer == 7 equally sized steps ranging from -MAXSTEER to MAXSTEER == pi/30 this roughly corresponds to a 90 degree turn of the steering wheel. The acceleration has actionc_accel == 5 equally sized steps ranging from -MAXACCEL to MAXACCEL == 4.0 in m/s^2, (accelerating from 0 to 100Mph at 4 m/s^2 takes 9 seconds, like any family car). done is true when the car gets too close to a yolocar, when it speed above the maximum allowed MAXSPEED == 14 m/s (50 Kmph or 30 Mph) or when it reverses at more than MINSPEED == -0.9 m/s. When the car overtakes a yolocar the yolocar is re-spawned randomly at about ~60 meters in front of our car. The reward is proportional to the velocity, position and angle of the car on the lane preferring low angles, central position and high velocity. A small "keep alive" reward is given regardles of the car dynamical parameters.

Training with Aleph-Star and n-step DQN

for training of N-Step DQN use the matching functions InitializeDTDQN, traindtdqn, and plotdtdqn. The hyperparameters are as close as possible between the two methods for an apples to apples comparison. Still there are a few differences that cannot be bridged because of intrinsic differences in the methods.

For this environment, and using this network architecture (similar to the DQN paper), the heuristinc learnt by Aleph-Star shows consistently and robustly better perfomance than n-step DQN, as seen in the figure below. The tree reward is even higher: 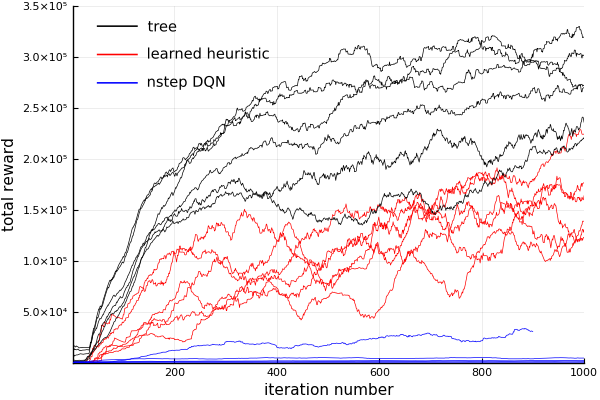 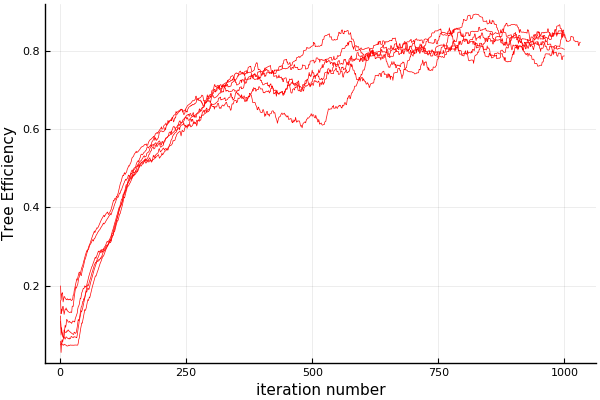 Implement the following methods, the sensors could be either an image or just a vector of numbers:

well, what are the alternatives? We had an implementation in Python but the simulation is just too slow unless coded in C which makes the whole project less fun when you consider integration, compilation, and loss of interactivity. The Julia implementation is fast, it can be used with PyTorch through PyCall, we can can easily change the simulation and sensors to fit our research needs. One could use the Atari Learning Environment through projects like atari-py or directly through C/C++ using Cxx but then we would have to deal with the C/C++ implementation issues (hard to modify, bugs, memory leaks, etc.) BTW, all this was succesfully tried