somalier makes checking any number of samples for identity easy directly from the alignments or from jointly-called VCFs:

The first step is to extract sites. For VCF just use:

with a sites file from releases

For BAM or CRAM, use: This is parallelizable by sample via cluster or cloud, but here, using a for loop:

--sites is a VCF of known polymorphic sites in VCF format. A good set is provided in the releases but any set of common variants will work.

The next step is to calculate relatedness on the extracted data:

This will create text and interactive HTML output (similar to peddy) that makes it fast and easy to detect mismatched samples and sample-swaps.

Note that the somalier relate command runs extremely quickly (< 2 seconds for 600 samples and ~1 minute for 4,500 samples) so it's possible to add/remove samples or adjust a pedigree file and re-run iteratively.

For example to add the n + 1th samples, just run somalier extract on the new sample and then re-use the already extracted data from the n original samples.

For huge sample-sets, if you run into a bash error for argument list too long, you can pass the somalier files as quoted glob strings like: "/path/to/set-a/*.somalier" "/path/to/set-b/*.somalier".

somalier can also infer first-degree relationships (parent-child) when both-parents are present and can often build entire pedigrees on high-qualty data. To do this, use somalier relate --infer ... and the samples.tsv output will be a pedigree file indicating the inferred relationships.

The usage is also described above. Briefly, after downloading the somalier binary and a sites vcf from the releases run:

for each sample to create a small binary file of the ref and alt counts for the variants listed in sites.hg38.vcf.gz.

This will create an html file for QC in a few seconds.

Note that if a new sample is added to the cohort, it's only necessary to perform the extract step on that sample and then run the (fast) relate step again with all of the extracted files.

somalier can extract from a multi or single-sample VCF or a GVCF. This will be much faster, in cases where it's available, this would look like:

following this, there will be a $sample.somalier file for each sample in the joint.vcf.gz

Note that somalier uses the AD field to extract depth information. If that FORMAT field is not present in the header, then it will use the genotypes only and use a total depth of 20 (10,10 for heterozygote), etc.

get a static binary from here

Users can also get a docker image here which contains htslib and a somalier binary ready-for-use.

somalier takes a list of known polymorphic sites. Even a few hundred (or dozen) sites can be a very good indicator of relatedness. The best sites are those with a population allele frequency close to 0.5 as that maximizes the probability that any 2 samples will differ. A list of such sites is provided in the releases for GRCh37 and hg38.

In order to quickly calculate genotypes at these sites, somalier assays the exact base. The extraction step is done directly from the bam/cram files 1 sample at a time.

The relate step is run on the output of the extract commands. It runs extremely quickly so that new samples can be added and compared. It uses 3 bit-vectors per sample for hom-ref, het, hom-alt. Each bitvector is a sequence of 64 bit integers where each bit is set if the variant at that index in the sample is for example, heterozygous. With this setup, we can use fast bitwise operations and popcount hardware instructions to calculate relatedness extremely quickly.

For each sample-pair, it reports:

These are used to calculate relatedness and a measure of relatedness that is unaffected by loss-of-heterozygosity that is often seen in some cancers. The interactive output allows toggling between any of these measures.

It also reports depth information and the count of HET, HOM_REF, HOM_ALT, and unknown genotypes for each sample along with a number of metrics that are useful for general QC. 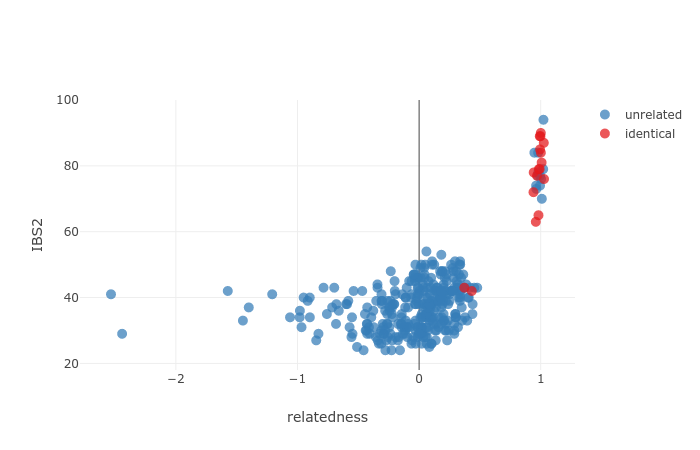 Here, each point is a pair of samples. We can see that the expected identical sample-pairs (e.g. tumor-normal pairs) specified by the user and drawn in red mostly cluster together on the right. Unrelateds cluster on the lower left. The sample-swaps are the blue points that cluster with the red. In the somalier output, the user can hover to see which sample-pairs are involved each point

note: this feature is working, but still experimental. it may change in future versions.

somalier can predict ancestry on a set of query samples given a set of labelled samples, for example from thousand genomes along with labels for. This would look like:

Where the ++ separates the labeled samples from the query samples. This command will create an html output along with a text file of the predictions.

Note that these will work for either GRCh37 or hg38 as long as you use the most recent sites files distributed with somalier.

Usage is intentionally very simple and running somalier extract or somalier relate will give sufficient help for nearly all cases.

By default somalier will only consider variants that have a "PASS" or "RefCall" FILTER. To extend this list, set the environment variable SOMALIER_ALLOWED_FILTERS to a comma-delimited list of additional filters to allow.

by default sites with an allele balance < 0.01 will be considered homozygous reference. To adjust this, use e.g. : SOMALIER_AB_HOM_CUTOFF=0.04 somalier relate ...

This work was motivated by interaction and discussions with Preeti Aahir and several early users who provided valuable feedback.