tinyalloc maintains 3 linked lists: fresh blocks, used blocks, free blocks. All lists are stored in the same fixed sized array so the memory overhead can be controlled at compile time via the configuration vars listed below. During initialization all blocks are added to the list of fresh blocks.

The difference between free & fresh blocks is the former already have an associated heap address and size from previous usage. OTOH fresh blocks are uninitialized and are only used if no existing free blocks satisfy an allocation request.

The diagram illustrates the state of having 1 freed block (green), 2 used blocks (red) and the beginning of the fresh (unused) block list: 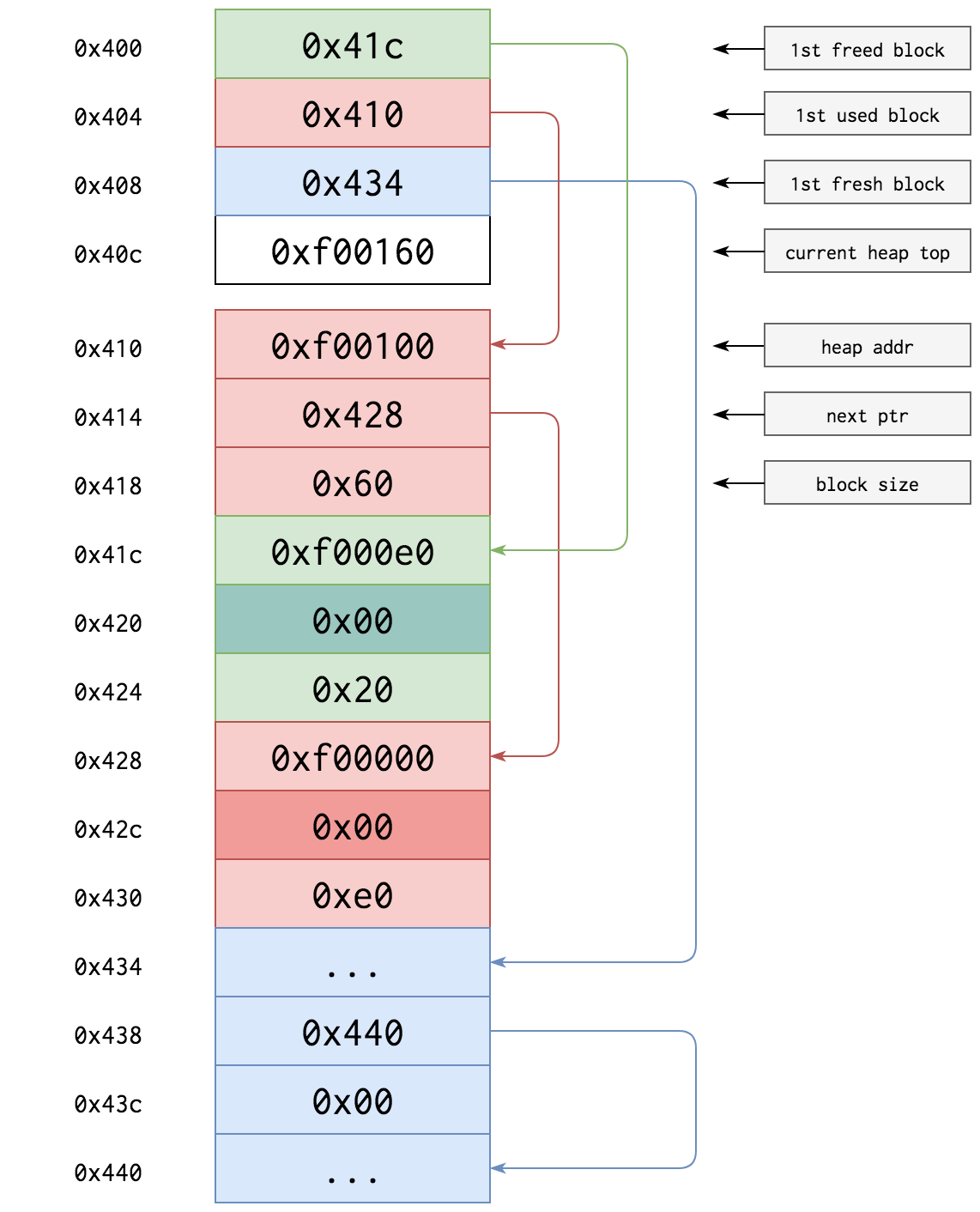 When a new chunk of memory is requested, all previously freed blocks are checked for potential re-use. If a block is found, is larger than the requested size and the size difference is greater than the configured threshold (TA_SPLIT_THRESH), then the block is first split, the chunks added to the used & free lists respectively and the pointer to the first chunk returned to the user. If no blocks in the free list qualify, a new block is allocated at the current heap top address, moved from the "fresh" to the "used" block list and the pointer returned to the caller.

Note: All returned pointers are aligned to TA_ALIGN word boundaries. Same goes for allocated block sizes. Also, allocation will fail when all blocks in the fixed size block array are used, even though there might still be ample space in the heap memory region...

The list of freed blocks is sorted by block start address. When a block is being freed, tinyalloc uses insertion sort to add the block at the right list position and then runs a compaction procedure, merging blocks as long as they form consecutive chunks of memory (with no gaps in between them). The resulting obsolete blocks are re-added to the list of available blocks.

Initializes the control datastructure. MUST be called prior to any other tinyalloc function.

Like standard malloc, returns aligned pointer to address in heap space, or NULL if allocation failed.

Like free, but returns boolean result (true, if freeing succeeded). By default, any consecutive memory blocks are being merged during the freeing operation.

On a 32bit system, the default configuration causes an overhead of 3088 bytes in RAM, but can be reduced if fewer memory blocks are needed.

If building in debug mode (if TA_DEBUG symbol is defined), two externally defined functions are required: