Snapcast is a multiroom client-server audio player, where all clients are time synchronized with the server to play perfectly synced audio. It's not a standalone player, but an extension that turns your existing audio player into a Sonos-like multiroom solution.
Audio is captured by the server and routed to the connected clients. Several players can feed audio to the server in parallel and clients can be grouped to play the same audio stream.
One of the most generic ways to use Snapcast is in conjunction with the music player daemon (MPD) or Mopidy. 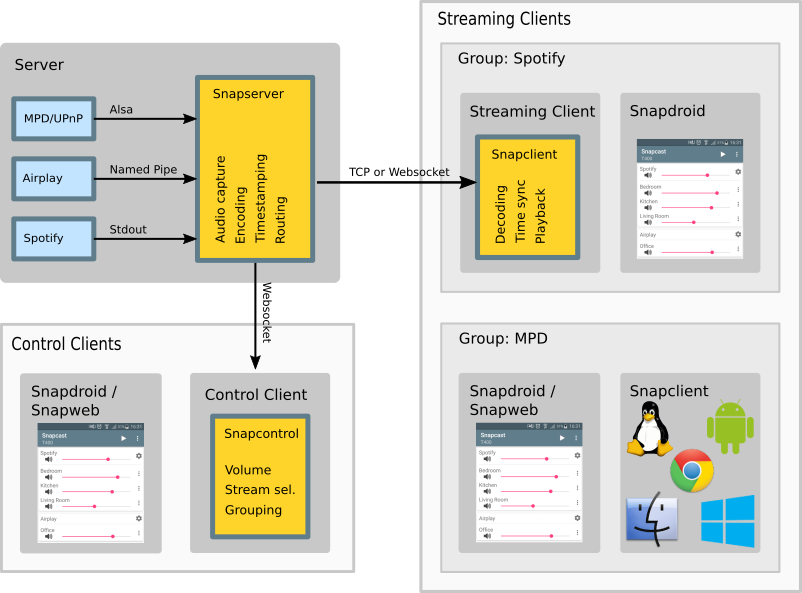 How does it work

The chunks are encoded and tagged with the local time. Supported codecs are:

The encoded chunks are sent via a TCP connection to the Snapclients. Each client does continuous time synchronization with the server, so that the client is always aware of the local server time. Every received chunk is first decoded and added to the client's chunk-buffer. Knowing the server's time, the chunk is played out using a system dependend low level audio API (e.g. ALSA) at the appropriate time. Time deviations are corrected by playing faster/slower, which is done by removing/duplicating single samples (a sample at 48kHz has a duration of ~0.02ms).

Typically the deviation is below 0.2ms.

For more information on the binary protocol, please see the documentation.

You can either install Snapcast from a prebuilt package (recommended for new users), or build and install snapcast from source.

There are debian packages of automated builds for armhf and amd64 in Snapos Actions. Download and extract the archive for your architecture and follow the debian installation instructions.

On macOS and Linux, snapcast can be installed using Homebrew:

The bravest among you may be interested in SnapOS, a small and fast-booting "just enough" OS to run Snapcast as an appliance.

There is a guide (with the necessary buildfiles) available to build SnapOS, which comes in two flavors:

Please note that there are no pre-built firmware packages available.

The server configuration is done in /etc/snapserver.conf. Different audio sources can by configured in the [stream] section with a list of source options, e.g.:

The client will use as audio backend the system's low level audio API to have the best possible control and most precise timing to achieve perfectly synced playback.

Parameters are appended to the player name, e.g. --player alsa:buffer_time=100. Use --player <name>:? to get a list of available options.
For some audio backends you can configure the PCM device using the -s or --soundcard parameter, the device is chosen by index or name. Available PCM devices can be listed with -l or --list
If you are running MPD and Shairport-sync into a soundcard that only supports 48000 sample rate, you can use --sampleformat <arg> and the snapclient will resample the audio from shairport-sync, for example, which is 44100 (i.e. --sampleformat 48000:16:*)

All connected clients should play random noise now. You might raise the client's volume with "alsamixer". It's also possible to let the server play a WAV file. Simply configure a file stream in /etc/snapserver.conf, and restart the server:

When you are using a Raspberry Pi, you might have to change your audio output to the 3.5mm jack:

To setup WiFi on a Raspberry Pi, you can follow this guide

Snapcast can be controlled using a JSON-RPC API over plain TCP, HTTP, or Websockets:

The server is shipped with Snapweb, this WebApp can be reached under http://<snapserver host>:1780. 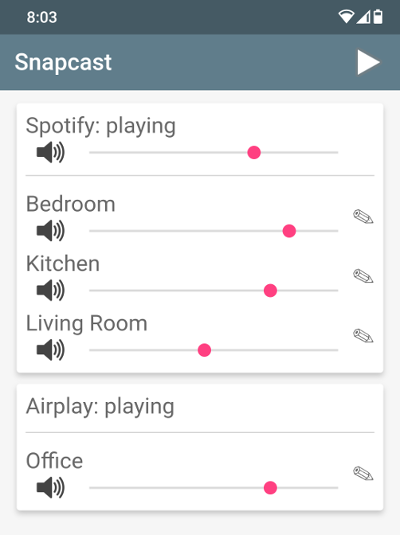 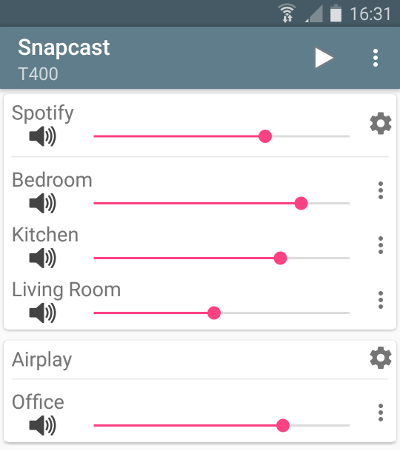 There is also an unofficial WebApp from @atoomic atoomic/snapcast-volume-ui. This app lists all clients connected to a server and allows you to control individually the volume of each client. Once installed, you can use any mobile device, laptop, desktop, or browser.

There is also an unofficial FHEM module from @unimatrix27 which integrates a Snapcast controller into the FHEM home automation system.

For a web interface in Python, see snapcastr, based on python-snapcast. This interface controls client volume and assigns streams to groups.

Another web interface running on any device is snapcast-websockets-ui, running entirely in the browser, which needs websockify. No configuration needed; features almost all functions; still needs some tuning for the optics.

A web interface called HydraPlay integrates Snapcast and multiple Mopidy instances. It is JavaScript based and uses Angular 7. A Snapcast web socket proxy server is needed to connect Snapcast to HydraPlay over web sockets.

For Windows, there's Snap.Net, a control client and player. It runs in the tray and lets you adjust client volumes with just a few clicks. The player simplifies setting up snapclient to play your music through multiple Windows sound devices simultaneously: pc speakers, hdmi audio, any usb audio devices you may have, etc. Snap.Net also runs on Android, and has limited support for iOS.

Snapcast can be used with a number of different audio players and servers, and so it can be integrated into your favorite audio-player solution and make it synced-multiroom capable. The only requirement is that the player's audio can be redirected into the Snapserver's fifo /tmp/snapfifo. In the following configuration hints for MPD and Mopidy are given, which are base of other audio player solutions, like Volumio or RuneAudio (both MPD) or Pi MusicBox (Mopidy).

The goal is to build the following chain:

This guide shows how to configure different players/audio sources to redirect their audio signal into the Snapserver's fifo:

Unordered list of features that should make it into the v1.0