In addition, the server supports powerful NymphCast apps written in AngelScript to extend the overall NymphCast functionality with e.g. 3rd party audio / video streaming protocol support on the server side, and cross-platform control panels served to the client application that integrate with the overall client experience.

NymphCast requires at least the server application to run on a target device, while the full functionality is provided in conjunction with a remote control device:

Client-side core functionality is provided through the NymphCast library.

The current development version is v0.1-alpha4. Version 0.1 will be the first release. The following list contains the major features that are planned for the v0.1 release, along with their implementation status.

Timeline for the v0.1 release:

The NymphCast project consists out of multiple components:

The NymphCast Player provides NymphCast client functionality. It is also a demonstration platform for the NymphCast SDK (see details on the SDK later in this document). It is designed to run on any OS that is supported by the Qt framework. 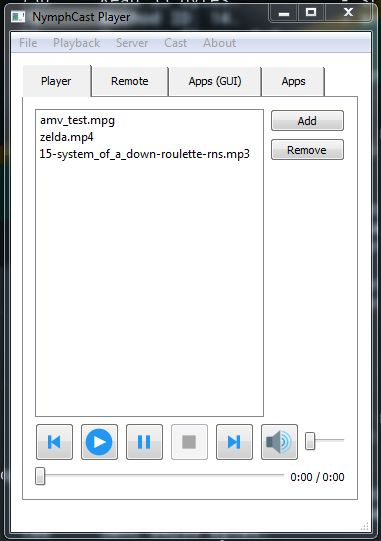 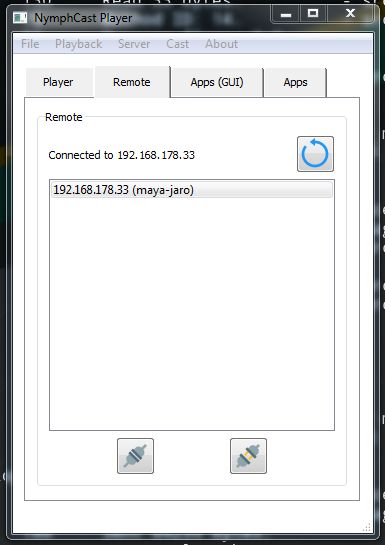 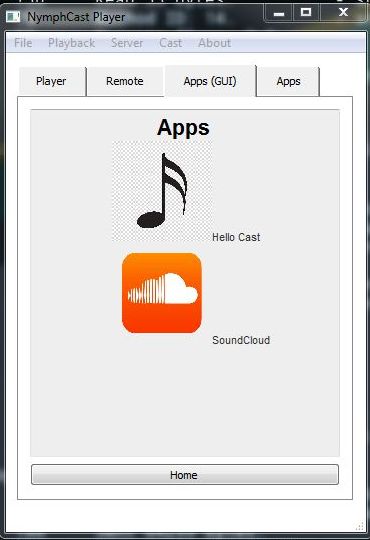 The server should work on any platform that is supported by a C++17 toolchain and the LibPoco dependency. This includes Windows, MacOS, Linux and BSD.

FFmpeg and SDL2 libraries are used for audio and video playback. Both of which are supported on a wide variety of platforms, with Linux, MacOS and Windows being the primary platforms. System requirements also depend on whether only audio or also video playback is required. The latter can be disabled, which drops any graphical output requirement.

Memory requirements depend on the NymphCast Server configuration: by default the ffmpeg library uses an internal 32 kB buffer, and the server itself a 20 MB buffer. The latter can be configured using the (required) configuration INI file, allowing it to be tweaked to fit the use case.

For the Qt-based NymphCast Player, a target platform needs to support LibPoco and have a C++ compiler which supports C++17 (<filesystem> header supported) or better, along with Qt5 support. Essentially, this means any mainstream desktop OS including Linux, Windows, BSD and MacOS should qualify, along with mobile platforms. Currently Android is also supported, with iOS support planned.

For the CLI-based NymphCast Client, only LibPoco and and C++17 support are required.

Mobile platforms are a work in progress. An Android client (native Java with JNI) is in development.

To start using NymphCast, you need a device on which the server will be running (most likely a SBC or other Linux system). NymphCast is offered as binaries for selected distros, and as source code for use and development on a variety of platforms.

NymphCast is currently in Alpha stage. Experimental releases are available on Github (see the 'Releases' folder).

For Alpine Linux and postmarketOS:

If pre-compiled releases for your target device or operating system are currently not listed above, you may need to build the server and client applications from source.

The server binary can be started with just a configuration file. To start the server, execute the binary (from the bin/ folder) to have it start listening on port 4004:

The server will listen on all network interfaces for incoming connections. It supports the following options:

The NymphCast Player is a GUI-based application and accepts no command line options.

Note: This section is for building the project from source. Pre-built binaries are provided in the 'Releases' folder.

The steps below assume building the server part on a system running a current version of Debian (Buster) or similarly current version of Arch (Manjaro) Linux or Alpine Linux. The player client demo application can be built on Linux/BSD/MacOS with a current GCC toolchain, or MSYS2 on Windows with MinGW toolchain.

Once the project files have been downloaded, run the setup.sh script in the project root, or install the dependencies and run the Makefile in the client and server folders as described. Either method will output a binary into the newly created bin/ folder.

To build the corresponding client-related parts of NymphCast, in addition to a C++ toolchain with C++17 support, one needs the dependencies as listed below.

If using a compatible OS (e.g. Debian Buster, Alpine Linux or Arch Linux), one can use the setup script:

Else, use the manual procedure:

This demonstration client uses Qt5 to provide user interface functionality. The binary release comes with the necessary dependencies, but when building it from source, make sure Qt5.x is installed or get it from www.qt.io.

Or (building and running on Windows & other desktop platforms):

Now you should be able to execute the player binary, connect to the server instance using its IP address and start casting media from a file or URL.

The focus of the project is currently on the development of the NymphCast server and the protocol parts. Third parties are encouraged to contribute server-side app support of their services and developers in general to contribute to server- and client-side development.

The current server and client documentation is hosted at the Nyanko website.

An SDK has been made available in the src/client_lib/ folder. The player project under player/ uses the SDK as part of a Qt5 project to implement a NymphCast client which exposes all of the NymphCast features to the user.

To use the SDK, the Makefile in the SDK folder can be executed with a simple make command, after which a library file can be found in the src/client_lib/lib folder.

Note: to compile the SDK, both NymphRPC and LibPOCO (1.5+) must be installed.

Note: For Android, one can compile for ARMv7 Android using make lib ANDROID=1and for AArch64 Android using ANDROID64=1. This requires that the Android SDK and NDK are installed and on the system path.

After this the only files needed by a client project are this library file and the nymphcast_client.h header file.

NymphCast is a fully open source project. The full, 3-clause BSD-licensed source code can be found at its project page on Github, along with binary releases.

NymphCast is fully free, but its development relies on your support. If you appreciate the project, your contribution, Ko-Fi or donation will help to support the continued development.