Isolation Alloc (or IsoAlloc) is a secure and fast(ish) memory allocator written in C. It is a drop in replacement for malloc on Linux / Mac OS using LD_PRELOAD. Its security strategy is partially inspired by Chrome's PartitionAlloc. A memory allocation isolation security strategy is best summed up as keeping objects of different sizes or types separate from one another. Strict allocation isolation can be achieved using the IsoAlloc APIs directly.

Isolation Alloc is designed and tested for 64 bit Linux. The space afforded by a 64 bit process makes this possible, therefore Isolation Alloc does not support 32 bit targets. It may work in a 32 bit address space but it remains untested and the number of bits of entropy provided to mmap based page allocations is far too low in a 32 bit process to provide much security value. It may work on operating systems other than Linux/Mac OS but that is also untested at this time.

Additional information about the allocator and some of its design choices can be found here.

You can think of Isolation Alloc as a region based memory allocator. If you are familiar with the implementation of arenas in other allocators then the concepts here will be familiar to you. 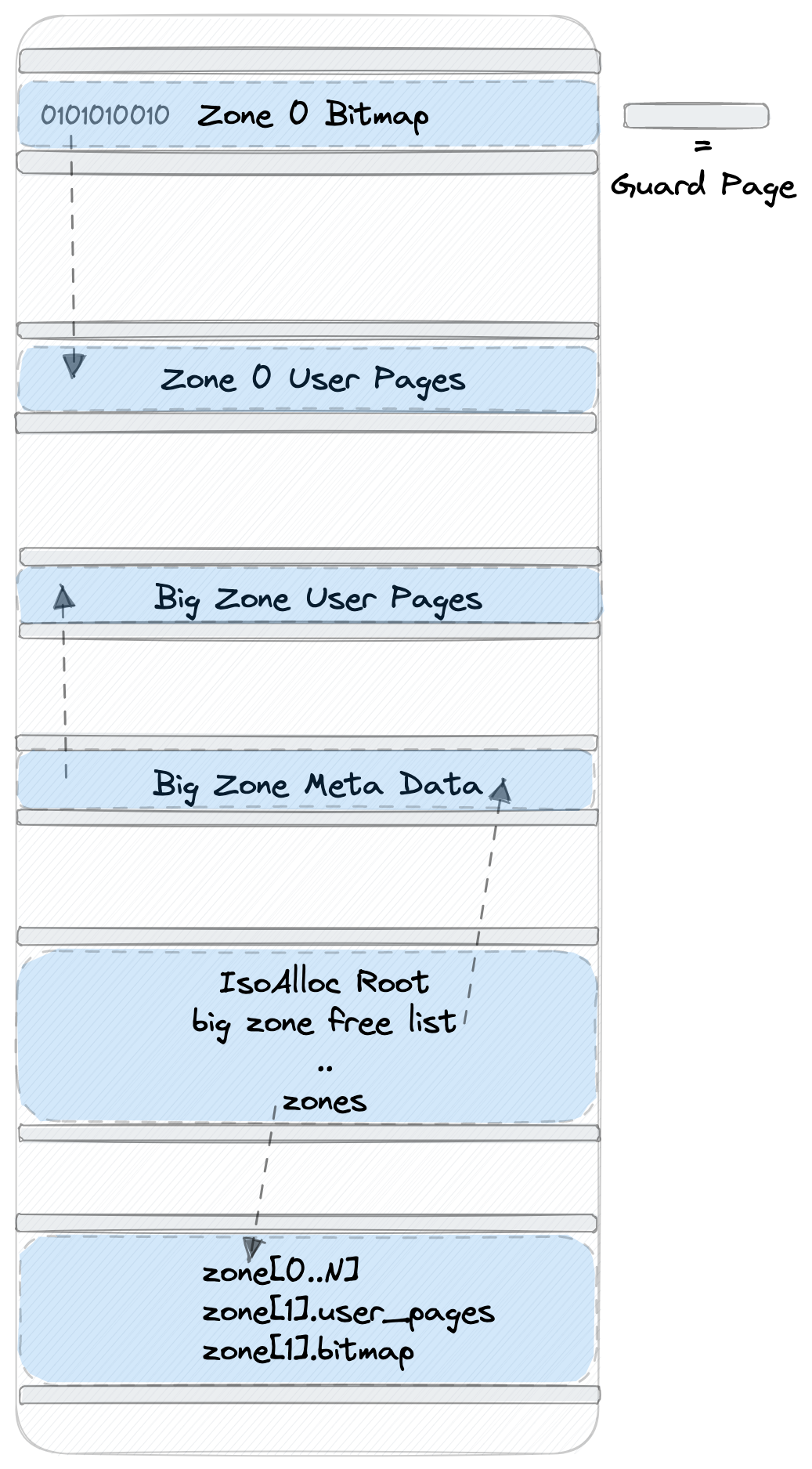 There is one iso_alloc_root structure which contains a fixed number of iso_alloc_zone structures. These iso_alloc_zone structures are referred to as zones. Zones point to user chunks and a bitmap that is used to manage those chunks. The translation between bitmap and user chunks is referred to as bit slots. Both of these allocations are done separately, the zone only maintains pointers to them. These pointers are masked in between alloc and free operations. The bitmap contains 2 bits of state per user chunk. The current bit value specification is as follows:

All user chunk pages and bitmap pages are surrounded by guard page allocations with the PROT_NONEpermission. Zones are created for specific sizes, or manually created through the exposed API for a particular size or object type. Internally managed zones will live for the entire lifetime of the process, but zones created via the API can be destroyed at any time.

If DEBUG, LEAK_DETECTOR, or MEM_USAGE are specified during compilation a memory leak and memory usage routine will be called from the destructor which will print useful information about the state of the heap at that time. These can also be invoked via the API, which is documented below.

A feature similar to GWP-ASAN can be enabled with ALLOC_SANITY in the Makefile. It samples calls to iso_alloc/malloc and allocates a page of memory surrounded by guard pages in order to detect Use-After-Free and linear heap overflows. This feature works on all supported platforms.

You can also enable UNINIT_READ_SANITY for detecting uninitialized read vulnerabilities using the userfaultfd syscall. You can read more about that feature here. This feature is only available on Linux.

IsoAlloc is thread safe by way of protecting the root structure with an atomic lock built with c11 atomic_flag support. This means every thread that wants to allocate or free a chunk needs to wait until it can grab the lock. This design choice has some big pros and cons. It can negatively impact performance of multi threaded programs that perform a lot of allocations. This is because every thread shares the same set of global zones. The benefit of this is that you can allocate and free any chunk from any thread with little code complexity required. In order to help alleviate contention on this atomic lock each thread has a zone cache built using thread local storage. This is implemented as a simple FILO cache of the most recently used zones by that thread. It's size can be increased using the THREAD_CACHE_SZ define in the internal header file. Making this cache too large can lead to negative performance implications for certain allocation patterns. For example, if a thread allocates multiple 32 byte chunks in a row then the cache may be populated entirely by the same zone that holds 32 byte chunks. Now when the thread goes to allocate a 64 byte chunk it iterates through the entire cache, does not find a usable zone, and then has to take the slow path which iterates through all zones again. You can disable this cache by setting THREAD_ZONE_CACHE to 0 in the Makefile.

When enabled the CPU_PIN feature will restrict allocations from a given zone to the CPU core that created that zone. Free operations are not restricted in this way. This mode is compatible with and without thread support, is only supported on Linux, and will introduce a slight performance hit to the hot path and may increase memory usage. The benefit of this mode is that it introduces an isolation mechanism based on CPU core with no configuration beyond enabling the CPU_PIN define in the Makefile.

The Makefile targets are very simple:

make library_debug - Builds a debug version of the library

make analyze_library_debug - Builds the library with clang's scan-build if installed

make c_library_objects - Builds .o files to be linked in another compilation step

make c_library_objects_debug - Builds debug .o files to be linked in another compilation step

make format - Runs clang formatter according to the specification in .clang-format

If you want to use IsoAlloc with a C++ program you can use the c_library_objects Makefile target. This will produce .o object files you can pass to your compiler. These targets are used internally to build a library with new and delete support.

If you try to use Isolation Alloc in an existing program then and you are getting crashes here are some tips to help you get started. First make sure you actually replaced all malloc, calloc, realloc and free calls to their iso_alloc equivalents. Don't forget things like strdup that return a pointer from malloc.

If you are getting consistent crashes you can build a debug version of the library with make library_debug and then catch the crash in GDB with a command similar to this gdb -q -command=misc/commands.gdb <your_binary>.

If all else fails please file an issue on the github project page.

void *iso_alloc(size_t size) - Equivalent to malloc. Returns a pointer to a chunk of memory that is size bytes in size. To free this chunk just pass it to iso_free.

void *iso_calloc(size_t nmemb, size_t size) - Equivalent to calloc. Allocates a chunk big enough for an array of nmemb elements of size bytes. The array is zeroized.

void *iso_realloc(void *p, size_t size) - Equivalent to realloc. Reallocates a new chunk, if necessary, to be size bytes big and copies the contents of p to it.

iso_alloc_zone_handle *iso_alloc_new_zone(size_t size) - Allocates a new private zone for allocations up to size bytes. Returns a handle to that zone.

uint64_t iso_alloc_detect_leaks() - Returns the total number of leaks detected for all zones. Will print debug logs when compiled with -DDEBUG

uint64_t iso_alloc_mem_usage() - Returns the total memory usage for all zones. Will print debug logs when compiled with -DDEBUG

uint64_t iso_alloc_zone_mem_usage(iso_alloc_zone_handle *zone) - Returns the total memory usage for a specified zone. Will print debug logs when compiled with -DDEBUG

void iso_verify_zones() - Verifies the state of all zones. Will abort if inconsistencies are found.

void iso_verify_zone(iso_alloc_zone_handle *zone) - Verifies the state of specified zone. Will abort if inconsistencies are found.