This repo along with the linked data can be used to re-create the experiments in our 2018 KDD paper, "Detecting Spacecraft Anomalies Using LSTMs and Nonparametric Dynamic Thresholding", which describes the background, methodologies, and experiments in more detail. While the system was originally deployed to monitor spacecraft telemetry, it can be easily adapted to similar problems.

Clone the repo (only available from source currently):

Configure system/modeling parameters in config.yaml file (to recreate experiment from paper, leave as is). For example:

To run via Docker:

To run with local or virtual environment

From root of repo, curl and unzip data:

Begin processing (from root of repo):

A jupyter notebook for evaluating results for a run is at telemanom/result_viewer.ipynb. To launch notebook:

Using your own data

Pre-split training and test sets must be placed in directories named data/train/ and data/test. One .npy file should be generated for each channel or stream (for both train and test) with shape (n_timesteps, n_inputs). The filename should be a unique channel name or ID. The telemetry values being predicted in the test data must be the first feature in the input.

The raw data available for download represents real spacecraft telemetry data and anomalies from the Soil Moisture Active Passive satellite (SMAP) and the Curiosity Rover on Mars (MSL). All data has been anonymized with regard to time and all telemetry values are pre-scaled between (-1,1) according to the min/max in the test set. Channel IDs are also anonymized, but the first letter gives indicates the type of channel (P = power, R = radiation, etc.). Model input data also includes one-hot encoded information about commands that were sent or received by specific spacecraft modules in a given time window. No identifying information related to the timing or nature of commands is included in the data. For example: 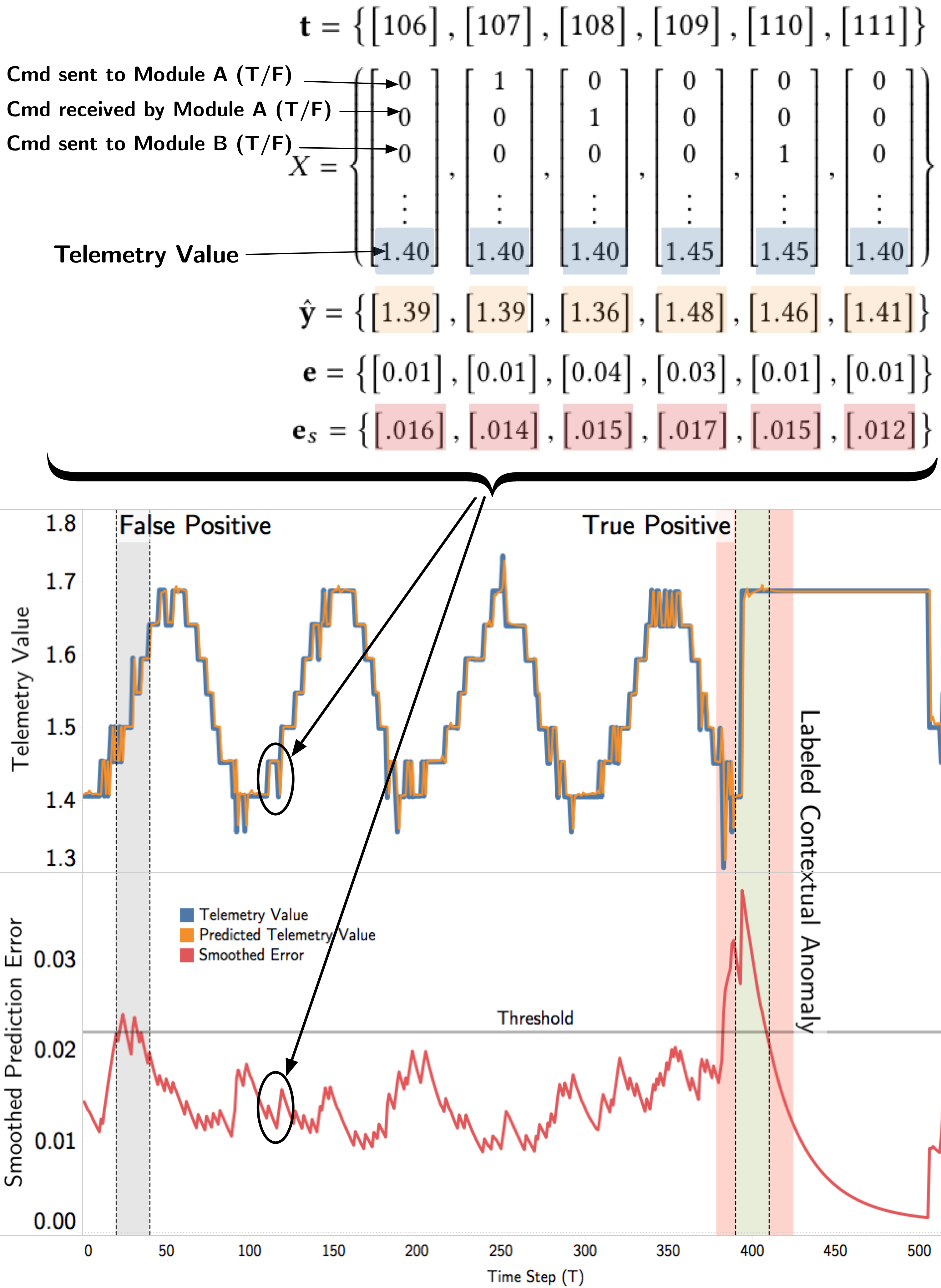 This data also includes pre-split test and training data, pre-trained models, predictions, and smoothed errors generated using the default settings in config.yaml. When getting familiar with the repo, running the result-viewer.ipynb notebook to visualize results is useful for developing intuition. The included data also is useful for isolating portions of the system. For example, if you wish to see the effects of changes to the thresholding parameters without having to train new models, you can set Train and Predict to False in config.yaml to use previously generated predictions from prior models.

The anomaly labels and metadata are available in labeled_anomalies.csv, which includes:

To provide your own labels, use the labeled_anomalies.csv file as a template. The only required fields/columns are channel_id and anomaly_sequences. anomaly_sequences is a list of lists that contain start and end indices of anomalous regions in the test dataset for a channel.

As mentioned, the jupyter notebook telemanom/result-viewer.ipynb can be used to visualize results for each stream.

If you use this work, please cite:

Telemanom is distributed under Apache 2.0 license.