Frankenstein provides a virtual environment to fuzz wireless firmwares. Firmwares can be hooked during runtime to extract their current state (i.e., xmitstate through InternalBlue). Then, they can be re-executed in a virtual environment for fuzzing. To do so, the firmware image needs to be reassembled to an ELF file that can be executed with QEMU. The firmware image reassembly is simplified by a web-based UI.

Frankenstein is currently optimized for the CYW20735 Bluetooth evaluation board. The slightly newer CYW20819 Bluetooth evaluation board is already partially supported. The port to the CYW20819 evaluation board is required due to CVE-2019-18614, which prevents further fuzzing of connection states such as music streaming or tethering. We are working on support for the Samsung Galaxy S10/S20—all of the European S10e/S10/S10+/Note 10/S20 models feature the same chip. If you already have symbols for one chip but are missing symbols for a chip that had similar compiler options, you might find using Polypyus before running BinDiff helpful.

This tool contains a web-based UI to configure the build. This includes management of symbols and memory dumps. The Makefile and linker scripts are generated automatically by the build system. The build system can be launched by the following command and navigating the browser to http://127.0.0.1:8000/

The build system already contains symbols and an initial memory dump. You can browse through the available projects and the dump without having the actual hardware, IDA Pro or Ghidra database, etc. Symbols are truncated to the first 1k symbols, so do not worry if something you know does not show up in the list immediately.

Each firmware version is located in a different project stored in projects. A project contains the file project.json, which holds the symbol names and the memory layout including memory dumps. The available symbols can be used to generate patches in C as well as for firmware emulation. To build all patches and emulators for the CYW20735 evaluation board run:

In general, having the project built is sufficient to run emulation with QEMU. However, for fuzzing it can be quite interesting to hold the firmware at a different state and continue fuzzing from there. So, if you currently do not have any of our supported hardware, you can skip the xmitstate step later.

After rebuilding the project using make -C projects/CYW20735B1, the firmware state can be emulated, until the Idle thread is entered. For this, execute:

Or execute it from the web frontend and get even more insights: 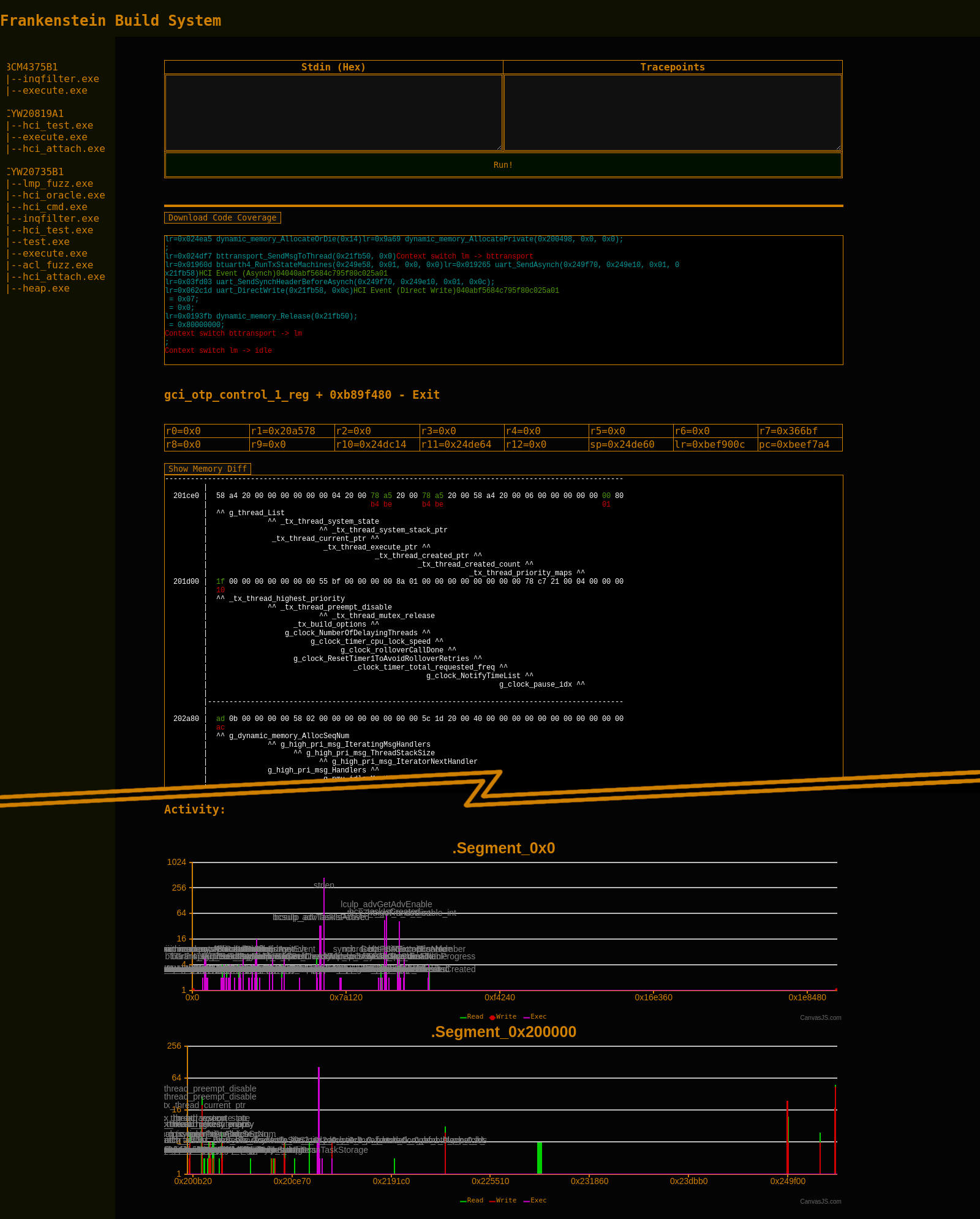 Attaching the Firmware to a Host

The basic execute.exe ELF file does not communicate to the outside world. Thus, it terminates in the Idle thread. However, for fuzzing the firmware, it needs to be attached to a real host and obtain random "wireless" inputs.

We provide an additional patch in hci_attach.exe that abstracts the calling conventions for the Bluetooth Core Scheduler (BCS). The BCS normally takes inputs from the hardware registers that contain decoded packets from the physical layer. We replace the invocation of the interrupt handler bluetoothCoreInt_C that calls the BCS every 312.5µs (1/2 Bluetooth clock cycle). This interrupt handler is now reading data from standard input (STDIN) of the Linux host. You can feed arbitrary inputs, i.e., data from /dev/urandom.

Note that hci_attach.exe also calls the btattach command on the host, which is part of the Linux Bluez Bluetooth stack. Once you run this file, your host will have a new Bluetooth device. You can list the current devices with hciconfig. The hook to pass UART data from the emulated device to the Linux host is installed in the firmware functions uart_directWrite and similar functions.

Depending on the host's exact behavior, you might need to reset the chip immediately after starting QEMU. Otherwise, emulation will get stuck or segfault. On a current (September 2019) Debian testing, this is not done automatically by the host and can be done manually as follows:

After successful reset, the emulation keeps running, which means that you will see a lot of output within short time on the terminal that started the hci_attach.exe. Now you can start actions on the host that cause interaction with the emulated Bluetooth firmware. For example, you can scan for Bluetooth LE devices:

If you open Wireshark while doing so, you will notice a lot of weird and invalid packets. Nonetheless, the scanning output will show a lot of devices with random addresses within short time, with some of these even returning mal-formatted names.

For debugging purposes, our heap sanitizer is currently writing 0x42 to released memory.

Now let's trigger CVE-2019-13916. As this vulnerability is within parsing of BLE PDUs, all you need to do is to successfully establish a connection to another LE device. If you connect to random addresses, this will succeed at some point in time. Usually, this takes a couple of minutes and in some cases the emulator crashes instead and you need to restart the emulation. Be patient!

To dump a custom state, the most important patch is patch/xmit_state.h. It generates re-executable firmware states. It is used in a custom InternalBlue extension internalBlueMod.py. If you are running on a native Linux and want to access the raw HCI device, you need superuser rights.

In this extension, we can run the following command to generate a re-executable state:

Depending on the target function, this might crash sometimes. Just try again. Once you successfully dumped a state, InternalBlue will finish with

If the firmware crashes afterwards, you can ignore this.

If you were running InternalBlue with sudo, you might need to adjust access rights to the generated state. To do so, run:

Now you will get detailed output about heap violations, i.e., caused by memcpy and the function which called it. Depending on what you debug, you might need to adjust the definitions in patch/heap_sanitizer.c.

For QEMU, you need to install the qemu-user package. Compilation of the project requires gcc-arm-none-eabi.

The following Python 3 packets are required:

We thank Anna Stichling for creating the Frankenstein logo.