With the exception of issues and PRs regarding changes to hosts/data/StevenBlack/hosts, all other issues regarding the content of the produced hosts files should be made with the appropriate data source that contributed the content in question. The contact information for all of the data sources can be found in the hosts/data/ directory.

Unified hosts file with base extensions

This repository consolidates several reputable hosts files, and merges them into a unified hosts file with duplicates removed. A variety of tailored hosts files are provided.

Therefore this repository is a hosts file aggregator. 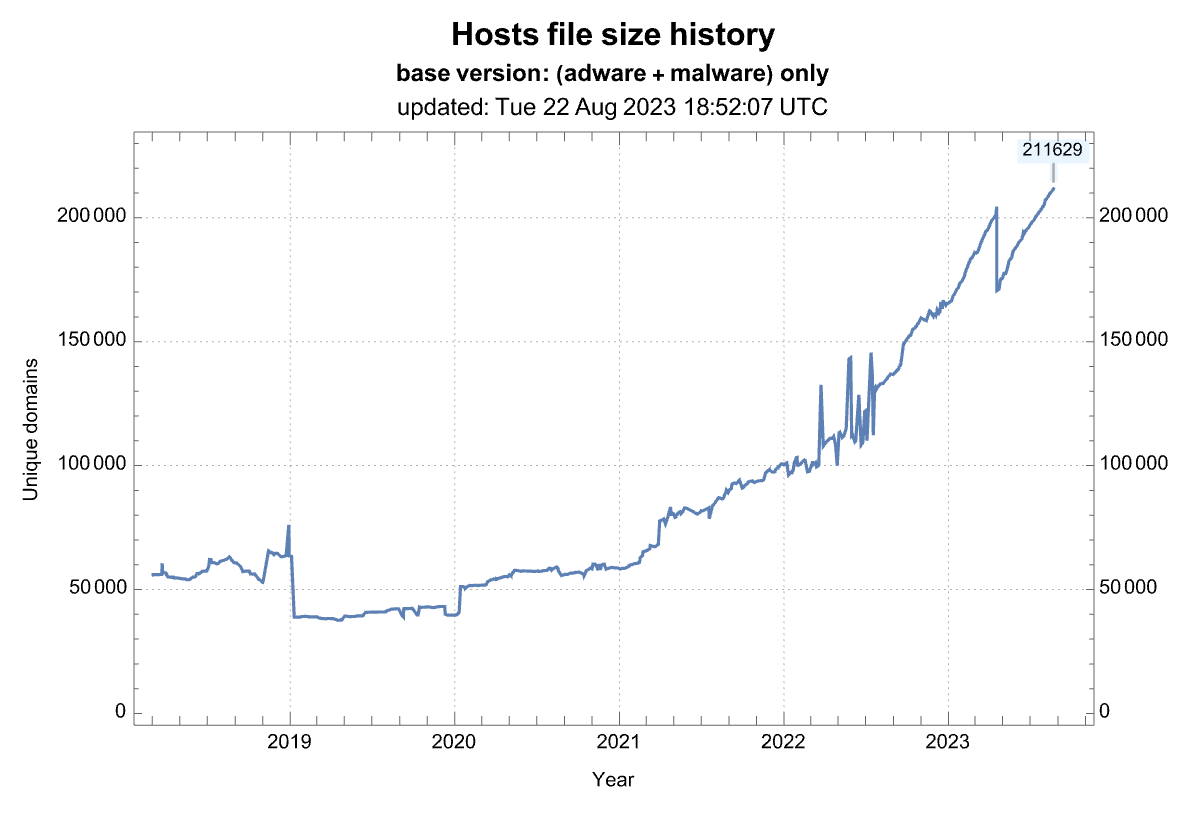 This repository offers 15 different host file variants, in addition to the base variant.

The Non GitHub mirror is the link to use for some hosts file managers like Hostsman for Windows that don't work with GitHub download links.

Expectation: These unified hosts files should serve all devices, regardless of OS.

Sources of hosts data unified in this variant

Updated hosts files from the following locations are always unified and included:

Extensions are optional, and can be combined in various ways with the base hosts file. The combined products are stored in the alternates folder.

Generate your own unified hosts file

You have three options to generate your own hosts file. You can use our container image, build your own image, or do it in your own environment. Option #1 is easiest if you have Linux with Docker installed.

Option 1: Use our container image (Linux only)

This will replace your /etc/hosts.

We assume you have Docker available on your host. Just run the following command. Set extensions to your preference.

If you want to add custom hosts or a whitelist, create either or both files as per the instructions and add the following arguments before ghcr.io/stevenblack/hosts:latest depending on which you wish to use.

You can rerun this exact command later to update based on the latest available hosts (for example, add it to a weekly cron job).

Option 2: Generate your own container image

We provide the Dockerfile used by the previous step, which you can use to create a container image with everything you need. The container will contain Python 3 and all its dependency requirements, and a copy of the latest version of this repository.

Build the Docker container from the root of this repo like this:

Then run your command as such:

This will create the hosts file, and remove it with the container when done, so not very useful. You can use the example in option #1 to add volumes so files on your host are replaced.

Option 3: Generate it in your own environment

To generate your own amalgamated hosts files you will need Python 3.6 or later.

First, install the dependencies with:

Note we recommend the --user flag which installs the required dependencies at the user level. More information about it can be found on pip documentation.

Common steps regardless of your development environment

To run unit tests, in the top-level directory, run:

The updateHostsFile.py script will generate a unified hosts file based on the sources in the local data/ subfolder. The script will prompt you whether it should fetch updated versions (from locations defined by the update.json text file in each source's folder). Otherwise, it will use the hosts file that's already there.

--auto, or -a: run the script without prompting. When --auto is invoked,

--backup, or -b: Make a backup of existing hosts file(s) as you generate over them.

--flush-dns-cache, or -f: skip the prompt for flushing the DNS cache. Only active when --replace is also active.

--keepdomaincomments, or -k: true (default) or false, keep the comments that appear on the same line as domains. The default is true.

--output <subfolder>, or -o <subfolder>: place the generated source file in a subfolder. If the subfolder does not exist, it will be created.

--skipstatichosts, or -s: false (default) or true, omit the standard section at the top, containing lines like 127.0.0.1 localhost. This is useful for configuring proximate DNS services on the local network.

--nogendata, or -g: false (default) or true, skip the generation of the readmeData.json file used for generating readme.md files. This is useful if you are generating host files with additional whitelists or blacklists and want to keep your local checkout of this repo unmodified.

--compress, or -c: false (default) or true, Compress the hosts file ignoring non-necessary lines (empty lines and comments) and putting multiple domains in each line. Reducing the number of lines of the hosts file improves the performances under Windows (with DNS Client service enabled).

--minimise, or -m: false (default) or true, like --compress, but puts each domain on a separate line. This is necessary because many implementations of URL blockers that rely on hosts files do not conform to the standard which allows multiple hosts on a single line.

How do I control which sources are unified?

Add one or more additional sources, each in a subfolder of the data/ folder, and specify the url key in its update.json file.

Add one or more optional extensions, which originate from subfolders of the extensions/ folder. Again the url in update.json controls where this extension finds its updates.

Create an optional blacklist file. The contents of this file (containing a listing of additional domains in hosts file format) are appended to the unified hosts file during the update process. A sample blacklist is included, and may be modified as you need.

How do I include my own custom domain mappings?

If you have custom hosts records, place them in file myhosts. The contents of this file are prepended to the unified hosts file during the update process.

The myhosts file is not tracked by git, so any changes you make won't be overridden when you git pull this repo from origin in the future.

How do I prevent domains from being included?

The domains you list in the whitelist file are excluded from the final hosts file.

The whitelist uses partial matching. Therefore if you whitelist google-analytics.com, that domain and all its subdomains won't be merged into the final hosts file.

The whitelist is not tracked by git, so any changes you make won't be overridden when you git pull this repo from origin in the future.

How can I contribute hosts records?

If you discover sketchy domains you feel should be included here, here are some ways to contribute them.

The best way to get new domains included is to submit an issue to any of the data providers whose home pages are listed here. This is best because once you submit new domains, they will be curated and updated by the dedicated folks who maintain these sources.

Then, submit a pull request.

WARNING: this is less desirable than Option 1 because the ongoing curation falls on us. So this creates more work for us.

Option 3: create your own hosts list as a repo on GitHub

What is a hosts file?

A hosts file, named hosts (with no file extension), is a plain-text file used by all operating systems to map hostnames to IP addresses.

In most operating systems, the hosts file is preferential to DNS. Therefore if a domain name is resolved by the hosts file, the request never leaves your computer.

Having a smart hosts file goes a long way towards blocking malware, adware, and other irritants.

For example, to nullify requests to some doubleclick.net servers, adding these lines to your hosts file will do it:

Traditionally most host files use 127.0.0.1, the loopback address, to establish an IP connection to the local machine.

We prefer to use 0.0.0.0, which is defined as a non-routable meta-address used to designate an invalid, unknown, or non-applicable target.

Using 0.0.0.0 is empirically faster, possibly because there's no wait for a timeout resolution. It also does not interfere with a web server that may be running on the local PC.

Location of your hosts file

To modify your current hosts file, look for it in the following places and modify it with a text editor.

To install hosts file on your machine add the following into your configuration.nix:

NixOS installations which are managed through flakes can use the hosts file like this:

The hosts extensions are also available with the following options:

On Linux and macOS, run the Python script. On Windows more work is required due to compatibility issues so it's preferable to run the batch file as follows:

This file MUST be run in command prompt with administrator privileges in the repository directory. In addition to updating the hosts file, it can also replace the existing hosts file, and reload the DNS cache. It goes without saying that for this to work, you must be connected to the internet.

To open a command prompt as administrator in the repository's directory, do the following:

You can also refer to the "Third-Party Hosts Managers" section for further recommended solutions from third parties.

Windows has issues with larger hosts files. Recent changes in security within Windows 10 denies access to changing services via other tools except registry hacks. Use the disable-dnscache-service-win.cmd file to make proper changes to the Windows registry. You will need to reboot your device once that's done. See the the comments within the cmd file for more details.

Your operating system will cache DNS lookups. You can either reboot or run the following commands to manually flush your DNS cache once the new hosts file is in place.

The Google Chrome browser may require manually cleaning up its DNS Cache on chrome://net-internals/#dns page to thereafter see the changes in your hosts file. See: https://superuser.com/questions/723703

Open a command prompt with administrator privileges and run this command:

Open a Terminal and run with root privileges:

Open a Terminal and run:

This repository uses release-it, an excellent CLI release tool for GitHub repos and npm packages, to automate creating releases. This is why the package.json and .release-it.json files are bundled.

Goals of this unified hosts file

The goals of this repo are to:

A high-quality source is defined here as one that is actively curated. A hosts source should be frequently updated by its maintainers with both additions and removals. The larger the hosts file, the higher the level of curation is expected.

It is expected that this unified hosts file will serve both desktop and mobile devices under a variety of operating systems.

Please read our Contributing Guide. Among other things, this explains how we organize files and folders in this repository.

We are always interested in discovering well-curated sources of hosts. If you find one, please open an issue to draw our attention.

Before you create or respond to any issue, please read our code of conduct.

Logo by @Tobaloidee Thank you!.