In light of current events we like to support the people behind PlatformIO Project, especially Ivan Kravets, and wish them the strength to help stop the war. See platformio-is-ukrainian-project-please-help-us-stop-the-war for what you can do.

Easy initial installation of Tasmota can be performed using the Tasmota WebInstaller.

If you like Tasmota, give it a star, or fork it and contribute!

Unless your Tasmota powered device exhibits a problem or lacks a feature that you need, leave your device alone - it works so don’t make unnecessary changes! If the release version (i.e., the master branch) exhibits unexpected behaviour for your device and configuration, you should upgrade to the latest development version instead to see if your problem is resolved as some bugs in previous releases or development builds may already have been resolved.

Every commit made to the development branch, which is compiling successfuly, will post new binary files at http://ota.tasmota.com/tasmota/ (this web address can be used for OTA updates too). It is important to note that these binaries are based on the current development codebase. These commits are tested as much as is possible and are typically quite stable. However, it is infeasible to test on the hundreds of different types of devices with all the available configuration options permitted.

Note that there is a chance, as with any upgrade, that the device may not function as expected. You must always account for the possibility that you may need to flash the device via the serial programming interface if the OTA upgrade fails. Even with the master release, you should always attempt to test the device or a similar prototype before upgrading a device which is in production or is hard to reach. And, as always, make a backup of the device configuration before beginning any firmware update.

If your device connects to mains electricity (AC power) there is danger of electrocution if not installed properly. If you don't know how to install it, please call an electrician (Beware: certain countries prohibit installation without a licensed electrician present). Remember: SAFETY FIRST. It is not worth the risk to yourself, your family and your home if you don't know exactly what you are doing. Never tinker or try to flash a device using the serial programming interface while it is connected to MAINS ELECTRICITY (AC power).

We don't take any responsibility nor liability for using this software nor for the installation or any tips, advice, videos, etc. given by any member of this site or any related site.

Please do not ask to add new devices unless it requires additional code for new features. If the device is not listed as a module, try using Templates first. If it is not listed in the Tasmota Device Templates Repository create your own Template.

If you want to compile Tasmota yourself keep in mind the following:

Please refer to the installation and configuration articles in our documentation.

See migration path for instructions how to migrate to a major version.

Do not upgrade from minimal to minimal version. It will most likely fail at some point and will require flashing via serial. If you do have to use minimal versions, always OTA to a full version of the same release before applying next minimal version.

Pay attention to the following version breaks due to dynamic settings updates:

While fallback or downgrading is common practice it was never supported due to Settings additions or changes in newer releases. Starting with release v9.1.0 Imogen the internal GPIO function representation has changed in such a way that fallback is only possible to the latest GPIO configuration before installing v9.1.0. 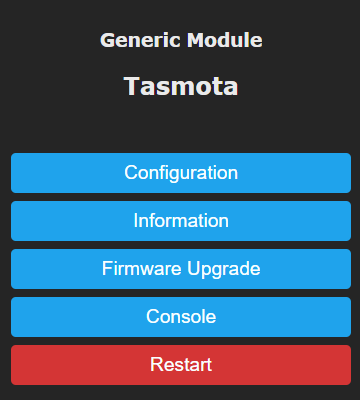 If you're looking for support on Tasmota there are some options available:

You can contribute to Tasmota by

People helping to keep the show on the road: