It requires minimal setup, and includes a simple web control panel for managing the host blacklist. 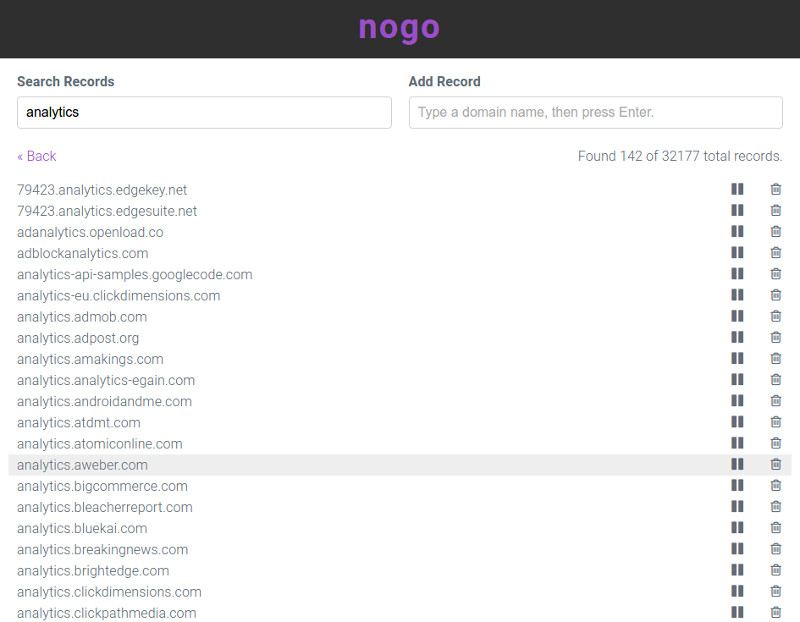 I wanted an open source ad blocker solution that was more universal than a browser plugin, and:

Simply download a binary release for your platform. Or, if you already have Go v1.8 or later installed you can run: go get github.com/seedifferently/nogo

For those who would rather clone the repo and build from source:

1. You must add hosts to the blacklist.

nogo doesn't ship with a built-in blacklist, so it won't block any hosts until you add them.

There are currently two methods for adding hosts to the blacklist:

2. You must reconfigure your DNS.

Your computer/mobile device/etc is probably set up by default to utilize a DNS server which allows connections to any host. Unless you update your DNS configuration to point to nogo (and only to nogo), nothing will change.

For those of you who may be unfamiliar with how to update your DNS configuration, check out Google's guide for their DNS service here: https://developers.google.com/speed/public-dns/docs/using

You can follow their instructions, but don't forget to substitute their DNS service IP addresses with the sole IP address of the machine running nogo.

My name is Seth and I've been talking to machines in various languages since the early 90s. If you find this useful and want to say thanks, feel free to tweet me. If you'd prefer to give back in some way, you could buy me a beer, share some Satoshi, or pass my resume on to someone you know who is tackling interesting problems using technology.