bootstrap has the following properties:

Join us for a chat on gophers.slack.com/messages/periph, get an invite here.

Yes, you can now flash an SDCard at the command line from Windows. 🎉

Bootstrapping a micro computer can be tedious. This repository contains a toolbox to enable the complete automation of the deployment of micro computers while making them low maintenance and as secure as reasonably possible.

There is intentionally no graphical application (GUI) and everything is done at the command line (CLI). There are already excellent GUI based flashing tools. This toolbox is for people wanting a complete self-contained lightweight CLI solution enabling large scale flashing of headless workers.

This toolbox was written to help manage the gohci workers, so they can be reflashed easily in case of tampering. That said, the tools are intentionally generic and reusable.

Prerequisite: you need to have Go installed on your local machine. Then install with:

efe flashes a modified Operating System (e.g. linux) on a SDCard that will self-configure upon initial boot.

This example downloads the latest Raspbian Stretch Lite image and flashes it to an SDCard connected to the workstation. It setups the wifi and sends an email to you when it is done.

Note that once the device is booted up, the setup takes several minutes, the hostname will be changed to raspberrypi-XXXX (or the relevant board name) and the email sent to you might be landing in your spam folder. The email contains the device's IP address on the LAN.

efe takes care of all the steps on the micro computer's initial boot via setup.sh.

Only -manufacturer is required, everything else is optional. For example if -wifi-ssid is not provided, Wifi is not configured. Similarly if -email is omitted, no email is sent at the end of the setup process. Use efe -help to see all the options.

If your workstation has more than one removable disk, it will not select one automatically and will ask you to specify one. You have to specify it with -sdcard:

On a Raspberry Pi 3, the console UART is not enabled by default anymore. Specify -forceuart to enable it, then use a serial cable (like FT232RL) to connect the serial pins to pins 8 and 10 on the header. Then run screen /dev/ttyUSB0 115200 on your linux host to connect (or equivalent on other OSes).

push cross-compiles one or multiple Go binaries and transfers them to a remote host, via rsync, scp or pscp. 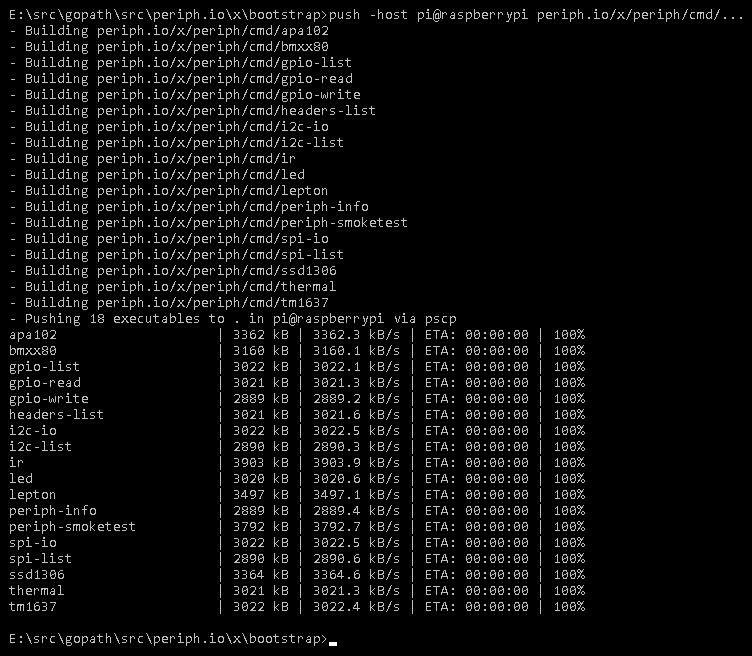 Fetches the library periph.io, then pushes all its tools to an host named raspberrypi all at once:

Push two specific executables in the subdirectory of the current one:

Use a special GOARCH instead of the default (arm), for example when targeting a ARM64 host:

push depends on being able to ssh to the remote host, in addition to the Go toolchain. Try running with -v.

Code that requires cgo will not easily be cross-compilable. Thankfully, periph.io doesn't use cgo.

First, make sure that ssh is enabled on your remote host. On Raspbian, this requires a specific setup.

Second, you'll need to have one of rsync/scp/pscp in your PATH. This is the case by default on OSX and Ubuntu, but not on Windows.

For Windows, visit www.chiark.greenend.org.uk/~sgtatham/putty/latest.html and download the MSI installer, e.g. putty-64bit-0.70-installer.msi. Install it. Find PuTTY in your start menu and start it. Try to connect to your Raspberry Pi.

If the tool prompts for a password at every execution, you'll want to create a ssh key with the tool ssh-keygen, copy your id_*.pub to your remote host as ~/.ssh/authorized_keys and finally make sure you have a ssh-agent running on your host. You can do ssh-add to save the key password in memory.

On Windows, use PuTTYgen (instead of ssh-keygen) to create the ssh key. Save it on your disk (password is recommended but not required) and copy paste the string starting with ssh-rsa to your Raspberry Pi into a new file named .ssh/authorized_keys, you'll need to create the directory .ssh first. Start pageant, right click on the icon in the system tray, and select Add key.

It is a modular tool so it is possible to use all the setup steps (the default) or execute only one configuration step. It intentionally depends on as little tools to be as portable as possible.

setup.sh is automatically used by efe to do the on-device configuration but it can also be used on a working device, for example on a Beaglebone or a C.H.I.P. which have integrated non-removable flash.

You can use the copy included in the repository, or for your convenience use the latest copy at raw.githubusercontent.com/periph/bootstrap/master/setup.sh or the short URL https://goo.gl/JcTSsH.

For any non-trivial use, it is recommended to make a copy since the tool can be changed at any moment and is not yet fully stable. The following examples use the short URL but you can replace with your own copy, for example it can be served on the LAN via serve-dir.

To get the full list of steps and options available, download the script first then run with --help:

It is also safe to run on your host.

If you already have a running device and want to run the full setup on it, use the following. That is generally what you want.

To get the full list of the operations done by default, run setup.sh in dry run mode on the device itself. It will not do any modification on the machine.

Installs and/or updates in-place your Go toolchain on any computer. This is super useful to mass upgrade Go on all your workers. It selects the latest version from https://golang.org/dl/.

Keep in mind that for devices with less than 8Gb of flash, it may not have enough space for this.

ARM64 devices running a 64 bit version of the OS will automatically compile locally since there is no official ARM64 release of Go at the time of this writing.

Renames the host to <board>-<id> where <board> is one of beaglebone, chip, odroid or raspberrypi and <id> is calculated from either the CPU serial number or systemd's hostctl 'Machine ID'. It is very useful because the number is deterministic, so the hostname won't change as you reflash your device while testing and it has enough entropy that the risk of collision on a LAN is low enough.

Forwards all emails sent to [email protected] via sendmail to your email address. This one is very useful for large scale fleet, as it also enables automatic email upon unattended-upgrade. This permits to know when something wrong happens on the worker.

Here's the list of modications done by setup.sh. As all documentation, it could be a bit stale so confirm with the setup.sh source code.

Refer to the code for the exact list, and please send a PR for any bug fixes or improvements you think of.

bootstrap was initiated with ❤️️ and passion by Marc-Antoine Ruel.