The code is released under the GNU General Public License.

This is the code for the Balanduino, the Open Source Balancing robot.

To use the Balanduino as a normal Arduino board you need to add the hardware add-on to the Arduino IDE.

See the Getting Started page for more information.

The Balanduino hardware consist of an ATmega1284P running at 10MHz.

More information can be found at the Wiki article: http://balanduino.tkjelectronics.dk/wiki/Overview.

To control the robot you can use the following game controllers:

To pair with any of the PS3 controller please see the following section of the USB Host library readme: https://github.com/felis/USB_Host_Shield_2.0#ps3-library.

To use a Xbox 360 wireless controller you need a special receiver. More information can be seen at the following link: https://github.com/felis/USB_Host_Shield_2.0#xbox-360-library.

To pair with the Wiimote send: CPW; via the serial monitor and then press 1 and 2 at the same time on the Wiimote. On the Wii U Pro controller you should press on the sync button instead.

It it also possible to control the robot and adjust the PID values and others variables using the following Android application:

You can also use your Windows, Mac or Linux based computer by using the following Processing application: https://github.com/TKJElectronics/BalanduinoProcessingApp.

You can also use a RC transmitter. For now only Spektrum satellite receivers are supported.

You will need the following receiver and cable:

After that simply connect the red wire to 5V, black to GND and the yellow one to RX0.

To bind with the satellite receiver send BS; via the serial monitor and then follow the instructions.

Note that you might need to disconnect the satellite receiver from RX0 if it is already sending data, as it will corrupt your command.

The video below shows a video demonstration of it being used together with some FPV equipment:

A video for the Kickstarter presentation can be seen below: 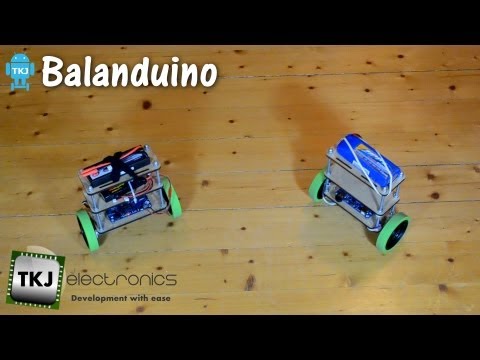 A video filmed with a GoPro mounted on the robot can be seen below: 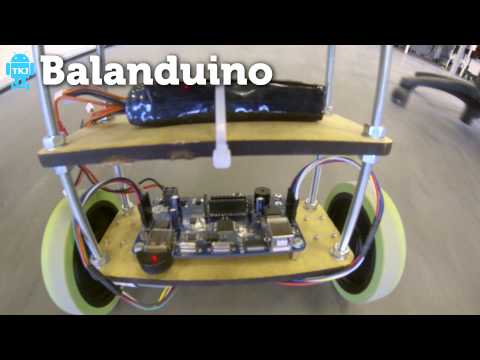 Calibration of the accelerometer

If the robot tilts to one of the sides when you receive the kit, you might need to calibrate the accelerometer.

This is done by simply sending AC; via the serial monitor. After that simply just follow the instructions.

To download the entire repository including all submodules run the following command in a terminal:

If you want to clone the project then use the recursive command to clone all the submodules as well: