A 3D third person RPG. With both multiplayer, and singleplayer capabilities.

The main gameplay-loop goal is to create an experience with enough complexity and depth, that can rival the more old-school MMO- and action rpgs, because nowadays I feel like that is something that got lost.

I want the game to run on every platform, but the game design is PC first. From the testing I've done this is not going to be an issue.

This project now uses the

, which is my custom version of godot.

The project also requires the presence of some of my engine modules, Pandemonium contains all of them. See here.

You can get binaries under the releases tab here.
You can also try a live version running in the browser here.

Unfortunately the web editor needs custom http headers to work and I can't set that up from github.io, so right now I don't have a hosted version of that. 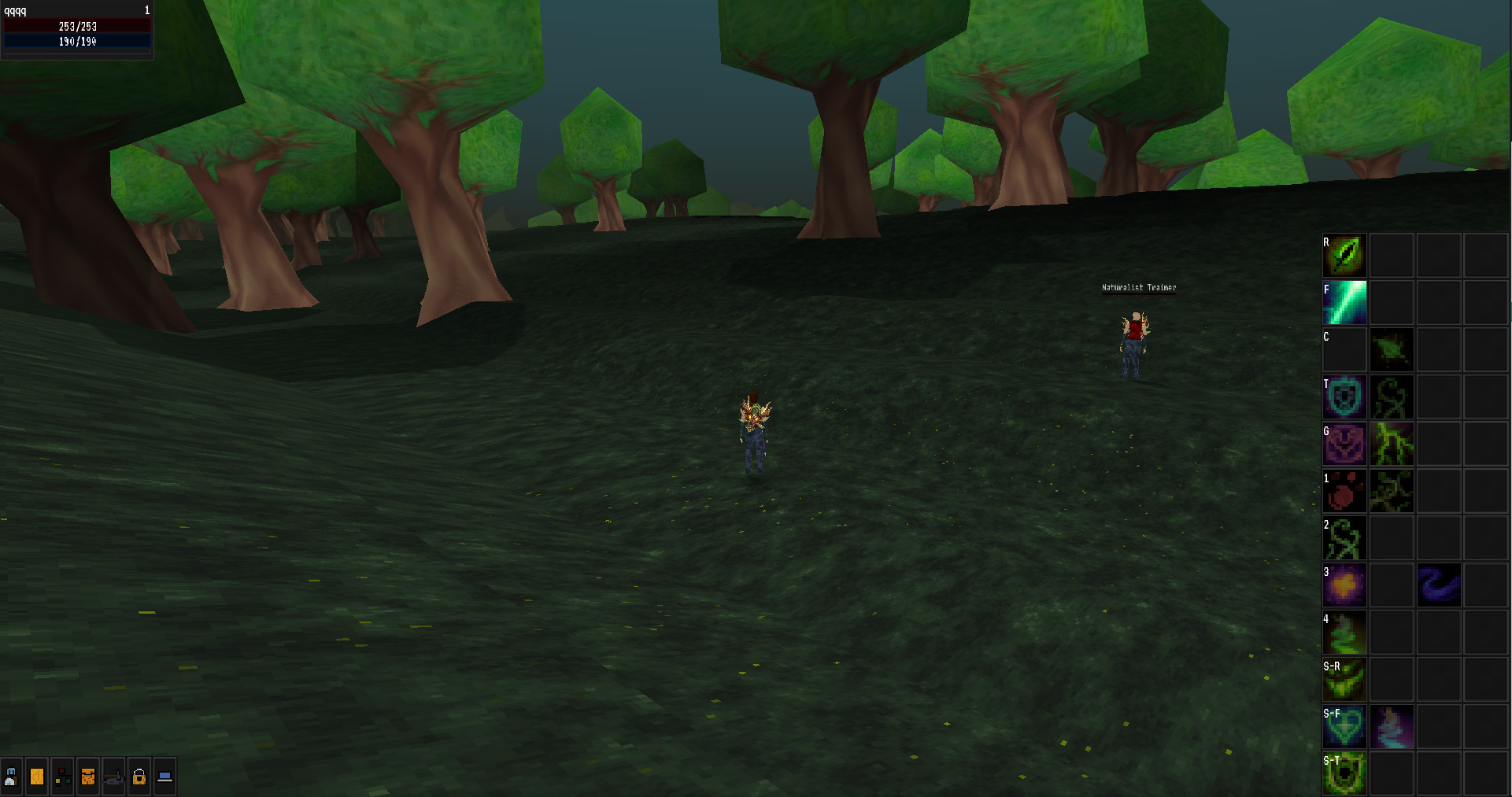 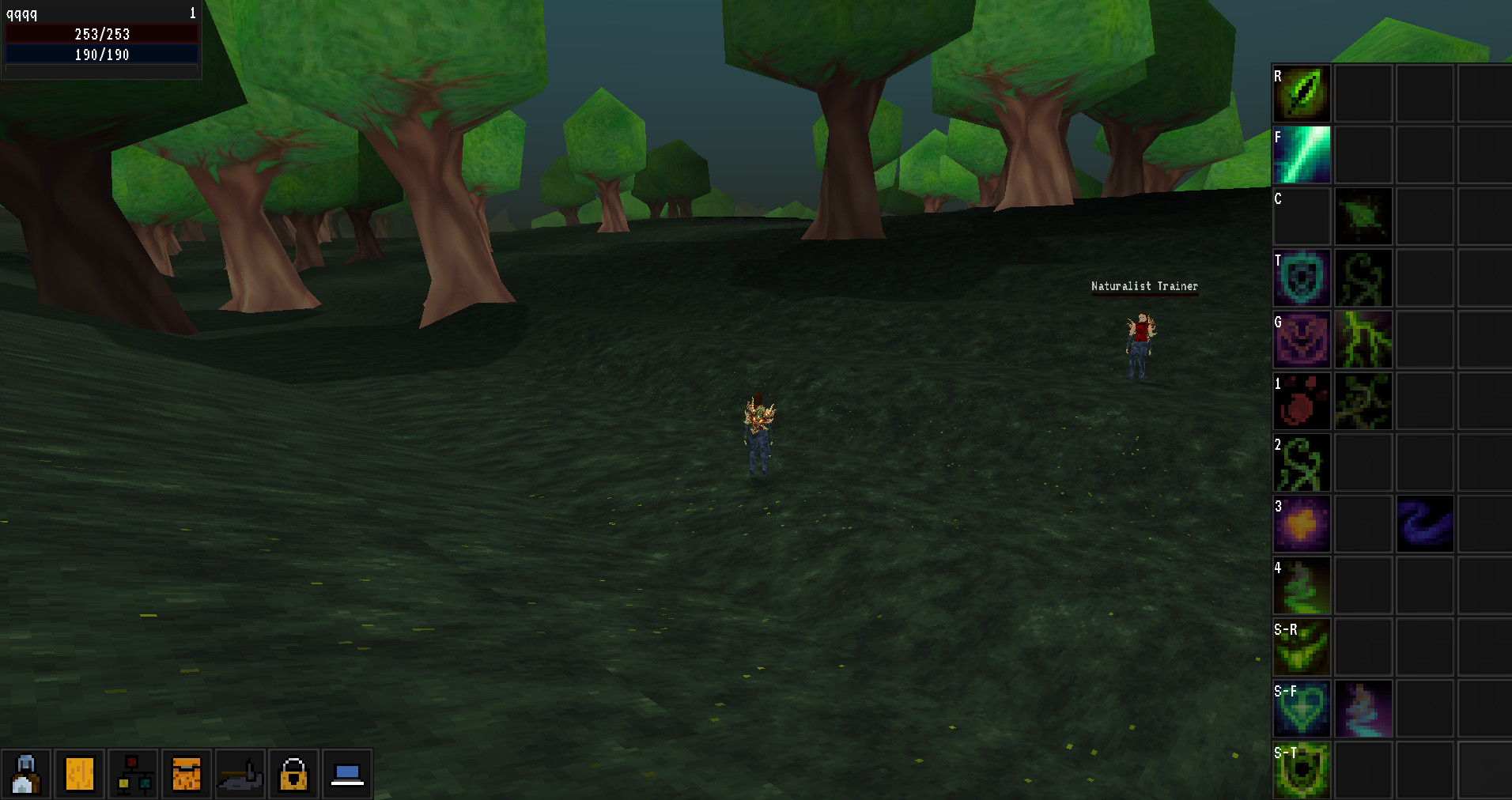 Some planned changes that will come sometime:

Multiplayer was broken for quite a while, so currently it has a lot more bugs than it used to. Most of these should be relativelty easy to fix.

As stated in the opening section the project uses a custom version of the godot engine.

The project's workflow has been set up so you can easily compile this version for yourself if you want to.

See the Compiling section if you want to know how to do this.

Currently the Pandemonium Engine is used as the engine for this project, which is a heavily customized verison of the Godot game engine. It's based on the 3.x branch.

It contains my engine modules, and also it got significanlty slimmed down compared to vanilla Godot.

For a more in-depth changelog see it's changelog file here.

The /game folder contains the game's code and assets. This is the folder you are supposed to open in the editor.

The game's folder structure should be (hopefully) mostly self explanatory.

I designed the game's code to be highly modular, so I created a loader module.
It will look for files named game_module.tres and call methods on them on certain events.
This system uses the DataManager singleton.

For example this is how the ui initializes itself:

The player's body script requests the ui nodes from the DataManager singleton (like var ui = DataManager.request_instance(DataManager.PLAYER_UI_INSTANCE)). And then the data manager will instance it's player_ui scene, and call all module's on_request_instance methods, while also passing the newly instanced scene to them.

These module scripts are also responsible for collecting all spells and then setting them into the ESS singleton, so they are actually castable.

This is the module for the naturalist, and it's ResourceDB, which will be merged into a central resource db for ESS.

Note that the module resources are sorted by their resource paths, so spells should always get the same id, on every platform every time. This is to optimize networkd spell casts.

Most of the game assets ended up under the modules folder here for this reason, however these might get moved, if I find a better arrangement.

The terrain generation is now handled by the new world_generator addon.

Right now the terrain is only going to be pseudo-random, as generating proper connected worlds are kind of super difficult, especially if you also have to mesh them in 3d.
I think this solution can be extended later to be able to do a full continent / world randomization / generation.

For now the idea is that we have a World resource, this contains Continents, those zontain Zones, and those contain SubZones.

The position and size is predetermined by the designer. And then when a chunk needs to be generated it gets put into this world, and then these generate it's data.

The editor contains an addon to help with editing the world.

Grab the engine itself, and then open the project inside the game folder.

After the initial import it might need an editor restart, however everything should work after that.

If you want to use master, you will likely need to build the editor for it if the c++ side had breaking changes since the last release.

First make sure, that you have everything installed to be able to compile the engine. See the official docs for compiling Godot for more info. My setup/compile script uses the same tools, so you don't need to install anything else.

Even though the project doesn't use godot anymore, their docs are still sufficient.

cd into the new folder:

This will clone and setup the engine, and all of the required modules into a new engine folder inside the project, using http.

Once it is done you can compile the engine.

To build the editor on windows with 4 threads run the following command:

To build the editor on linux with 4 threads run the following command:

I call this feature of the setup script build words. See.

Once the build finishes you can find the editor executable inside the ./engine/bin/ folder.

For convenience there is a provided editor.sh, or editor.bat for running it from the project's folder. These will create a copy, so you can even compile while the editor is running.

Alternatively if you don't want to use build words, you can also just go into the engine folder:

And compile godot as per the official docs.

The project's setup script contains support for "build words". These can be used from the root of this project.

For example to build the editor for windows with 4 threads you can use:

The first argument must start with b (build), then it needs to be followed by a few abbreviations (the order does not matters)

The rest of the arguments will be passed directly to godot's scons script.

Append e to build with tools=yes a.k.a. the editor.

if you omit e, the system will build the export template for you. For example:

This will be the release_debug windows export template.

By default the system builds in release_debug.

Append d for debug, or r for release.

Note: This only works on linux!

append s to the build string.

Optionally you can also make the build system only build a target module, by appending one of these:

Note: to easily run the editor you can use the editor.sh or editor.bat in the root of the project.

There are a few postfixes for the build words. These are more complex options. You have to append them to your build word with an underscore.

You can use as many as you want.

With this postfix you can build a slimmed down version of the engine. This disables quite a few unneeded modules.

If you get linker errors while building the game/editor about undefined referenced with atomic related functions you can use this postfix. It will add the -latomic command line switch to the linker flags.

I ran into this issue while building on a raspberry pi 4 with the x11 platform. It might be related to the recent reworks to threading.

Appends debug_symbols=no to the build command, which will strip the resulting binary from debug symbols.

Appends threads_enabled=yes to the build command. Useful for building the editor for html.

In order to use scons cache and to tell the build system where some of the required sdks are located you usually have to use environment variables. Most of the time you might just want to add them globally, howewer this is sometimes unfeasible (e.g. you don't have administrator access, or you just want to have multiple sdk versions installed).

In order to solve this a build config file was added.

If you want to use the config simply rename the provided build.config.example to build.config, and customize the settings inside.

If you you don't want to use the setup script (or just want to know what it actually does), this section will explain how to set everything up manually.

Now if you look at the HEADS file.

It contains the commit hashes for that particular revision for every module and the engine. The engine now contains all the modules, so at the moment only worry about the engine's commit hash.

You need to go and checkout the proper commit for it.

Now you can go ahead and compile the engine normally.

First pull the changes by calling

Then just run scons, to will update the modules.

Note: this is how to update the HEADS file. Normally you don't need to do this.

If you want to update the modules, and the engine to the latest, you can use (action=update):

For example to update the engine to the latest: scons a=u target=engine