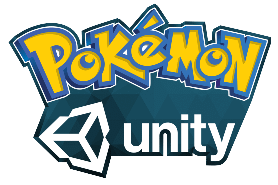 "Pokémon Unity was in development for about a year before I could not continue working on the project. Rather than let it die, I released the source as is." - Lucas.

I have changed a lot of code that was either unused (most unused assets were removed) or were obsolete. There can be a lot of conflicts if you're looking forward to using this branch as a framework rather than the test-project branch. Please be aware that some features in this branch are incomplete (the features in the test-project branch is being tracked and monitored by the build status).

I strongly recommend that you use the master branch as a base rather than the test-project branch. This branch is entirely experimental and the process of being completely redone all over -- possibility of breaking your fangame or other project.

I'm basing the code mimic and emulate the Pokemon Essentials package for RPG Maker MV, which is written in Ruby. But since Ruby follows similar object-oriented coding structures, it's easy to mirror the code to function the same.

These links point back to the Origin-Repo. release

There is a demo WebGL for testing available here: Link to Unity Cloud Build

There are also demos for Windows, Linux, and Mac zipped in Releases! Please report any bugs if found.

Names below are from Origin-Fork