Here’s my favorite example.
Once upon a time, if you clicked on the website link for The New York Times, you were exposed to malware.
And the reason is that if you ask for the front page of The New York Times, there are ads inserted, and they have been inserted by ad brokers who take them from whoever wants to pay for them.
And in some cases, it’s people who want to spread malware.
The little ad links are one of the famous ways to spread malware, and it’s not something I’ve ever clicked on, but it’s included.
So I have a certain amount of hygiene that I follow about what I click on, but in reality, I really rely upon additional filtering behind the scenes to keep me out of harm’s way.
So I have blacklists.
-- Paul Mockapetris (Dr. PM)

The other thing is that Cloudflare hosts content for far-right US organizations, militant groups, torrent sites, and sites that spread malware.
No matter what your political philosophy is, Cloudflare is hosting somebody that you find really repugnant.
So using them to filter your DNS doesn’t seem to me to be a good idea, because they’re not going to filter out content that they’re serving themselves.
-- Dr. PM

Repique is an advanced DNS stub which can run on different OS such as Windows, Linux, OpenWRT.

Repique is unique in the world because:

Illustration of running repique on a laptop manufactured in Y2008 which unbelievably boots to Windows for seconds without hibernate.
Illustration of memory cost, not as good as other swift programs, but acceptable to most of hardwares.

The words "pique" and "repique" are of Spanish origin

Although it often scores poorly, it is usually advantageous to declare it to prevent the opponent from scoring pique or repique, despite the tactical disadvantage of giving information to the opponent 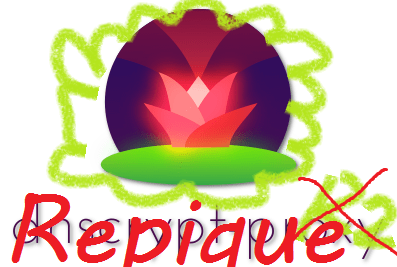 Why use pique or repique

Repique acts out a unifiable key point of Internet of Things - DNS Privacy and Confidence.
Be an advancer of IoT, repique embraces aspects of Freedom, Privacy and Security.
Nowadays people like using their preferred DNS services to maximize the interests of personal IoT and business network. An illuminated perspective of new DNS infrastucture is representing as multiple upstreams, multiple encryption protocols and multiple interventions. There are so many open source applications of DNS client/server that people usually can't distinguish difference between each other. They often confuse a DNS stub with a DNS server running locally. Even the authors of building DNS toolset, they are misleading the fundamental functionality and features of client/server.
For example:

Now, everybody knows the story in year 2020.

DNS is an Internet-critical protocol whose security greatly affect the security of Internet users. In this paper, JSOF presented 7 vulnerabilities affecting the popular DNS forwarder dnsmasq. These issues put networking and other devices at a risk of compromise and affect millions of Internet users which can suffer from the cache poisoning attack and RCE presented. This highlights the importance of DNS security in general and the security of DNS forwarders in particular. It also highlights the need to expedite the deployment of DNS security measures such as DNSSEC, DNS transport security and DNS cookies.

It sights a lack of creativity of DNS toolset mostly and these senseless users are used to pseudo newcome and speaking yogurt.
The fact is repique never aims at being a DNS server application so that it never performs overhead design or pseudo implementation.
However repique did most DNS stub never did, a powerful, dynamic and flexible program with interoperability to strong encryption protocols and routines to synthetic data. 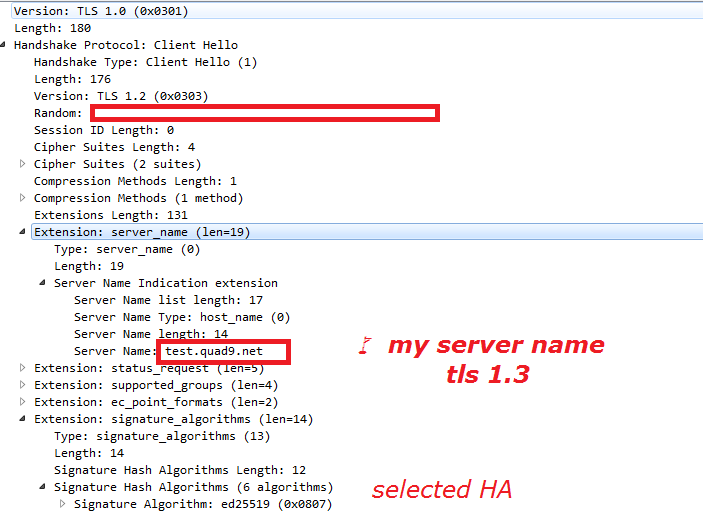 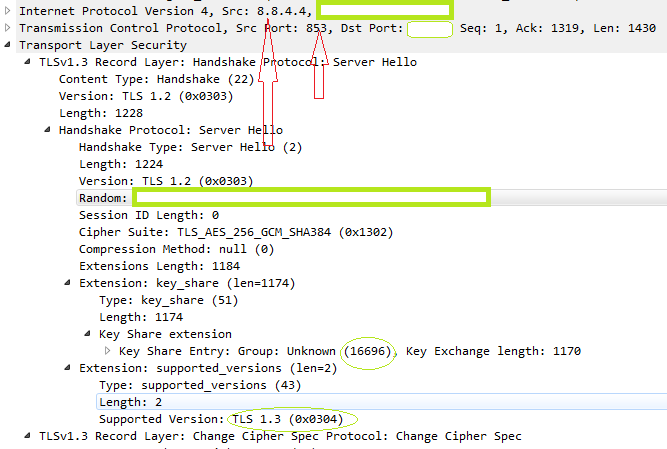 Illustration of communication with Google's public server using DoT and Combined Elliptic-Curve and Post-Quantum 2 by repique
It is not included in the releases, nevertheless you can find the pretty easy and straightforward implementation at my GITHUB gist.

You may find out the difference of TLS 1.3 golang implementation inside above snapshot. It's ture.
Repique demonstrates the ability to mod golang std-library and build together, meanwhile it won't be shipped with the release.
For more information, see GITHUB gist:

Repique can share cache and patterns between multiple listeners or on the contrary, isolate them as independence.
Repique can create nested groups for upstreams as well as tags for extra definition of upstreams.
Repique can use regular expressions to dispatch queries to groups, tags and listeners.
Repique has less explicit fingerprints and interaction behaviors than the rest of applications.
Repique enforces TLS to fix on version 1.3 and therefore bypasses https 1.1.
Repique uses same ordered cipher suites no matter of what hardware features running on and has discarded TLS_AES_128_GCM_SHA256 from v1.3 suites.
Repique uses compatible upstreams definitions with dnscrypt-proxy and compatible routines with Acrylic DNS.
Repique is the only alternative golang implementation conform to dnscrypt protocol.
Repique goes beyond other stubs by implementing preload functions and various cache procedures.(See example)

Who use pique or repique

Comparison between repique and dnscrypt-proxy

Since repique started from dnscrypt-proxy R2, introducing an overall changes to advantages is necessary to specify:

Comparison between repique and nextdns

Next just compare the size of both :)

Repique can run on different OS while MassDNS is designed to run on Linux.

Comparison between repique and CoreDNS

CoreDNS is a DNS server that chains plugins

Repique is a DNS stub that discarded plugins
If using CoreDNS as a forwarder, applicable size is coredns_1.8.1_windows_amd64.tgz 12.4 MB (extracted coredns.exe 41.0 MB)

Comparison between repique and Acrylic DNS

Acrylic is a DNS stub built with Delphi 7.
Repique is built with golang fresh version.
Repique can build with consistency on any machine and check its fidelity.
Acrylic supports less complex routines.

If using AdGuardHome as a forwarder, applicable size is AdGuardHome_windows_amd64.zip 8.31 MB
AdGuard comes with a beautiful dashboard and ad-block features.
There is no complex routines or strict TLS when using AdGuardHome.
It is easy to compare memory usage of both; the conclusion is clear: only repique can run on limited hardware e.g. a mips soc with small mem.

Download the latest release with golang 1.15 for AMD64 on Windows or Linux

Download the latest release with golang 1.16 for AMD64 on Windows or Linux

Notice:
Releases for OpenWRT won't be included in this repository @github.
AMD64 Linux is considered an exception.

Since version v1.1.5 of repique, you can use its sub-modules as libraries formally by go get.

However you still can get the source code and reuse it by 'git-clone' whatever the version is.

There is no additional service or setup to run repique.

You are free to run it as service by searching existing mature methodology from the Internet.

.md.minisig is automatically generated by the great GUI TOOL

Illustration of program files on Windows

Primary releases shipped with binaries are versioned like this:

Secondary tag releases with git and github are versioned like this:

MINOR versions of the twinned version are always matched for a single release. 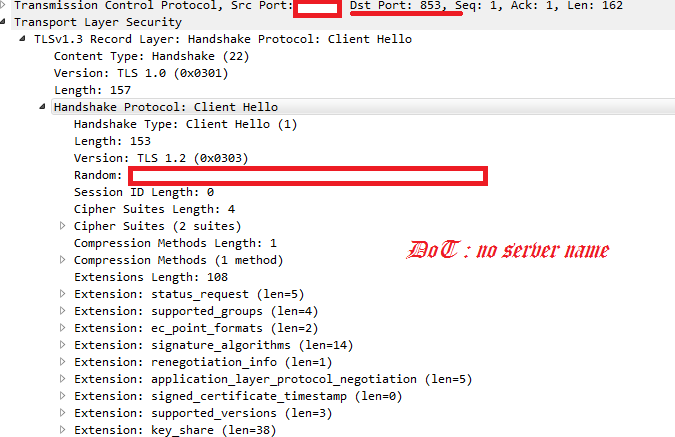 Repique respects TTL of any record from upstream resolvers or local routines, on the contrary, Repique's bats cache discards the TTL when caching.

However, it will drastically reduce latency, and improve privacy and reliability by avoid unneeded queries.
Of course, RFCs say that TTLs should be stricly respected.
But the reality is that DNS has become quite inefficient. 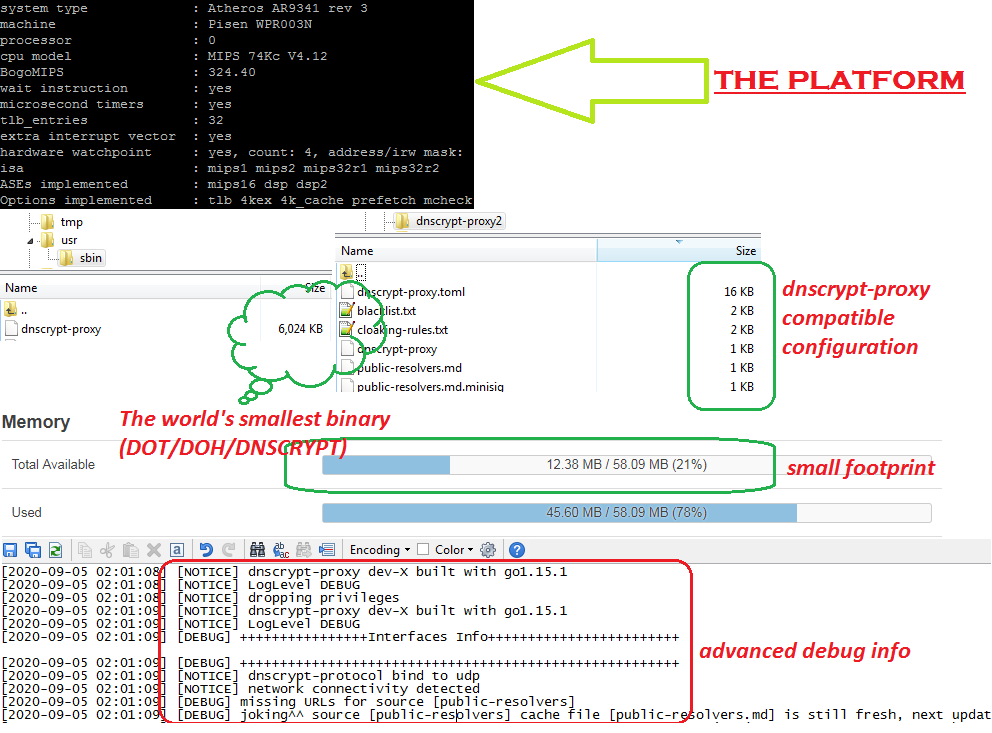