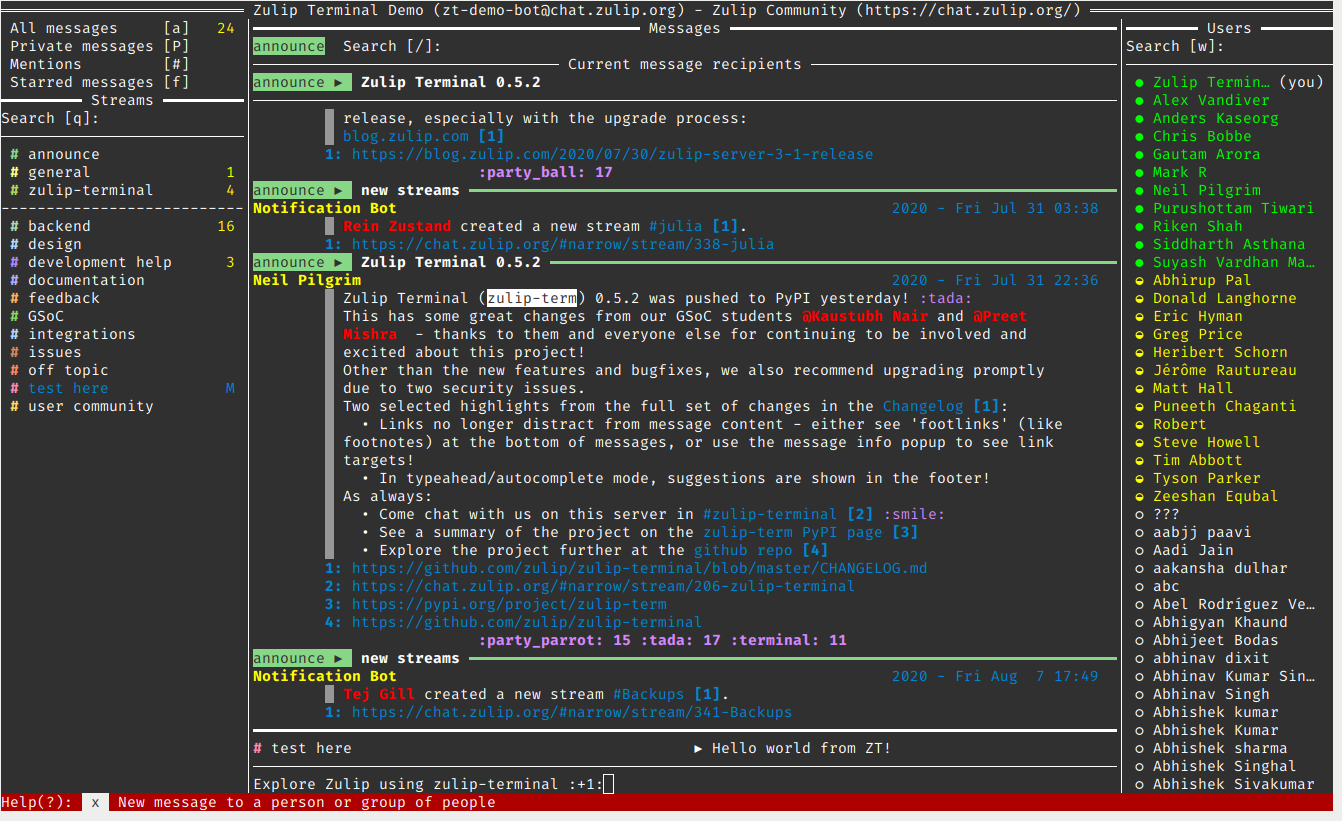 Learn how to use Zulip Terminal with our Tutorial.

We consider the client to already provide a fairly stable moderately-featureful everyday-user experience.

The current development focus is on improving aspects of everyday usage which are more commonly used - to reduce the need for users to temporarily switch to another client for a particular feature.

Current limitations which we expect to only resolve over the long term include support for:

For queries on missing feature support please take a look at the Frequently Asked Questions (FAQs), our open Issues, or sign up on https://chat.zulip.org and chat with users and developers in the #zulip-terminal stream!

The minimum server version that Zulip Terminal supports is 2.1.0. It may still work with earlier versions.

We also provide some sample Dockerfiles to build docker images in docker/.

With the python 3.6+ required for running, the following should work on most systems:

If you open a different terminal window (or log-off/restart your computer), you'll need to run step 2 of the above list again before running zulip-term, since that activates that virtual environment. You can read more about virtual environments in the Python 3 library venv documentation.

Keeping your install up to date

If running from the main git branch, note that this does not automatically update, and you must do so manually. This also applies to other source or development installs, including eg. https://aur.archlinux.org/packages/python-zulip-term-git/

Running for the first time

Upon first running zulip-term it looks for a zuliprc file, by default in your home directory, which contains the details to log into a Zulip server.

If it doesn't find this file, you have two options:

NOTE: If your server uses self-signed certificates or an insecure connection, you will need to add extra options to the zuliprc file manually - see the documentation for the Zulip python module.

We suggest running zulip-term using the -e or --explore option (in explore mode) when you are trying Zulip Terminal for the first time, where we intentionally do not mark messages as read. Try following along with our Tutorial to get the hang of things.

The zuliprc file contains information to connect to your chat server in the [api] section, but also optional configuration for zulip-term in the [zterm] section:

Note that notifications are not currently supported on WSL; see #767.

The following command installs notify-send on Debian based systems, similar commands can be found for other linux systems as well.

No additional package is required to enable notifications in OS X. However to have a notification sound, set the following variable (based on your type of shell). The sound value (here Ping) can be any one of the .aiff files found at /System/Library/Sounds or ~/Library/Sounds.

Zulip Terminal allows users to copy certain texts to the clipboard via a Python module, Pyperclip. This module makes use of various system packages which may or may not come with the OS. The "Copy to clipboard" feature is currently only available for copying Stream email, from the Stream information popup.

On Linux, this module makes use of xclip or xsel commands, which should already come with the OS. If none of these commands are installed on your system, then install any ONE using:

No additional package is required to enable copying to clipboard.

Zulip Terminal is being built by the awesome Zulip community.

To be a part of it and to contribute to the code, feel free to work on any issue or propose your idea on #zulip-terminal.

For commit structure and style, please review the Commit Style section below.

If you are new to git (or not!), you may benefit from the Zulip git guide. When contributing, it's important to note that we use a rebase-oriented workflow.

A simple tutorial is available for implementing the typing indicator. Follow it to understand how to implement a new feature for zulip-terminal.

You can of course browse the source on GitHub & in the source tree you download, and check the source file overview for ideas of how files are currently arranged.

Zulip Terminal uses urwid to render the UI components in terminal. Urwid is an awesome library through which you can render a decent terminal UI just using python. Urwid's Tutorial is a great place to start for new contributors.

Setting up a development environment

Various options are available; we are exploring the benefits of each and would appreciate feedback on which you use or feel works best.

Note that the tools used in each case are typically the same, but are called in different ways.

With any option, you first need to clone the zulip/zulip-terminal repository locally (the following will place the repository in the current directory):

The following commands should be run in the repository directory, which can be achieved with cd zulip-terminal.

This is the newest and simplest approach, if you have make installed:

Once you have a development environment set up, you might find the following useful, depending upon your type of environment:

If using make with pip, running make will ensure the development environment is up to date with the specified dependencies, useful after fetching from git and rebasing.

NOTE: The linters and pytest are run in CI (GitHub Actions) when you submit a pull request (PR), and we expect them to pass before code is merged. Running them locally can speed your development time, but if you have troubles understanding why the linters or pytest are failing, please do push your code to a branch/PR and we can discuss the problems in the PR or on chat.zulip.org.

If using make with pip, there are corresponding make targets for running linting and testing if you wish to use them (make lint & make test), and before pushing a pull-request (PR) ready for merging you may find it useful to ensure that make check runs successfully (which runs both).

NOTE: The lint script runs a number of separate linters to simplify the development workflow, but each individual linter can be run separately if you find this useful.

We aim to follow a standard commit style to keep the git log consistent and easy to read.

Much like working with code, it's great to refer to the git log, for the style we're actively using.

Our overall style for commit structure and messages broadly follows the general Zulip version control guidelines, so we recommend reading that first.

Our commit titles have slight variations from the general Zulip style, with each:

Generally with changes to code we request you update linting and tests to pass on a per-commit basis (not just per pull request). If you update tests, you can add eg. Tests updated. in your commit text.

Ideally we prefer that behavioral changes are accompanied by test improvements or additions, and an accompanying Tests added. or similar is then useful.

To aid in satisfying some of these rules you can use GitLint, as described in the following section. However, please check your commits manually versus these style rules, since GitLint cannot check everything - including language or grammar!

If you plan to submit git commits in pull-requests (PRs), then we highly suggest installing the gitlint commit-message hook by running gitlint install-hook (or pipenv run gitlint install-hook with pipenv setups). While the content still depends upon your writing skills, this ensures a more consistent formatting structure between commits, including by different authors.

If the hook is installed as described above, then after completing the text for a commit, it will be checked by gitlint against the style we have set up, and will offer advice if there are any issues it notices. If gitlint finds any, it will ask if you wish to commit with the message as it is (y for 'yes'), stop the commit process (n for 'no'), or edit the commit message (e for 'edit').

Other gitlint options are available; for example it is possible to apply it to a range of commits with the --commits option, eg. gitlint --commits HEAD~2..HEAD would apply it to the last few commits.

Tips for working with tests (pytest)

Tests for zulip-terminal are written using pytest. You can read the tests in the /tests folder to learn about writing tests for a new class/function. If you are new to pytest, reading its documentation is definitely recommended.

We currently have thousands of tests which get checked upon running pytest. While it is dependent on your system capability, this should typically take less than one minute to run. However, during debugging you may still wish to limit the scope of your tests, to improve the turnaround time:

When only a subset of tests are running it becomes more practical and useful to use the -v option (--verbose); instead of showing a . (or F, E, x, etc) for each test result, it gives the name (with parameters) of each test being run (eg. pytest -v -k __handle). This option also shows more detail in tests and can be given multiple times (eg. pytest -vv).

For additional help with pytest options see pytest -h, or check out the full pytest documentation.

The stdout (standard output) for zulip-terminal is redirected to ./debug.log if debugging is enabled at run-time using -d or --debug.

This means that if you want to check the value of a variable, or perhaps indicate reaching a certain point in the code, you can simply use print(), eg.

and when running with a debugging option, the string will be printed to ./debug.log.

With a bash-like terminal, you can run something like tail -f debug.log in another terminal, to see the output from print as it happens.

If you want to debug zulip-terminal while it is running, or in a specific state, you can insert

There's no effect in Zulip Terminal after making local changes!

This likely means that you have installed both normal and development versions of zulip-terminal.

To ensure you run the development version: