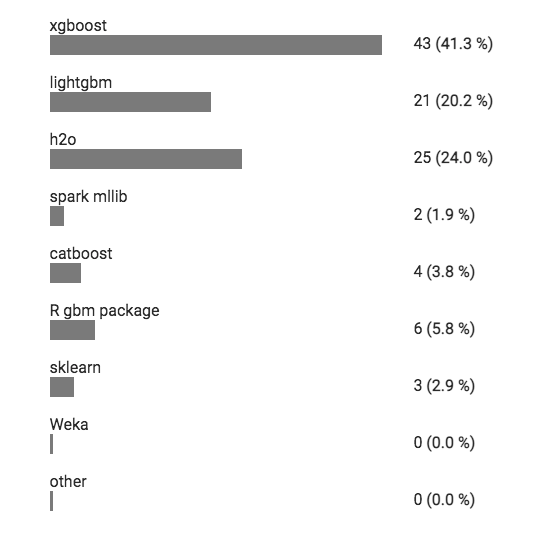 How to run/reproduce the benchmark

Installing to latest software versions and running/timing is easy and fully automated with docker:

Some additional studies obtained "manually" (not fully automated with docker as the main benchmark above). Thanks @Laurae2 for lots of help with some if these.

c5.9xlarge and m5.12xlarge are typically 20-50% faster than r4.8xlarge, for larger data more cores (m5.12xlarge) is the best, for smaller data high-frequency CPU (c5.9xlarge) is the best. Nevertheless, the ranking of libs by training time stays the same for a given data size when changing CPU. More details here.

Even more recently a CPU with both higher frequency and more cores became available on AWS: c5.12xlarge (Xeon Platinum 8275CL 3.00GHz, 48 cores) and also instances with 2 of these CPUs (but see results for multi-socket systems below): c5.24xlarge and c5.metal. Results for c5.metal are here.

While GBM trees must be grown sequentially (as building each tree depends on the results of the previous ones), GBM training can be parallelized e.g. by parallelizing the computation in each split (more exactly the histogram calculations). Modern CPUs have many cores, but the scaling of these GBM implementations is far worse from being proportional to the number of cores. Furthermore, it has been known for long (2016) that xgboost (and later lightgbm) slow down (!) on systems with 2 or more CPU sockets or when hyperthreaded cores are used. These problems have been very recently mitigated (2020), but it is still usually best to restrict your training process to the physical cores (avoid hyperthreading) and only 1 CPU socket (if the server has 2 or more sockets).

Even if only physical (no hyperthreading) CPU cores are used on 1 socket only, the speedup for example from 1 core to 16 cores is not 16x, but (on r4.8xlarge):

with more details here. In fact the scaling was worse until very recently, for example xgboost was at 2.5x at 1M rows (vs 6.5x now) before several optimizations have been implemented in 2020.

One would think more CPU cores means higher training speed, though because of RAM topology and NUMA, most of the above tools used to run slower on 2 CPUs than 1 CPU (!) until very recently (2020). The slowdown was sometimes pretty dramatic, e.g. 2x for lightgbm or 3-5x for xgboost even for the largest data in this benchmark. Very recently these effects have been mitigated by several optimizations in lightgbm and even more notably in xgboost. More details on the NUMA issue here, here and here.

where negative numbers mean on 64 cores it is slower than on 16 cores (by that much %) (e.g. -50% means a decrease in speed by 50% that is a doubling of training time). These numbers were much much worse until very recently (2020), for example training time (sec) for xgboost 1M rows:

Results on the fastest CPU (most cores, 1 socket, see above why this is the fastest) and the fastest GPU on EC2. The data is obtained by replicating the 10M dataset 10x, so the AUC is not indicative of a learning curve, just used to see if it is equal approximately the 10M AUC (it should be).

For the CPU runs, "RAM train" is measured as the increase in memory usage during training (on top of the RAM used by the data). For the GPU runs, the "GPU memory" usage is the total GPU memory used (cannot separate training from copies of the data), while the "extra RAM" is the additional RAM used by some of the tools (on the CPU) if any.

h2o xgboost on GPU is slower than native xgboost on GPU and also adds a lot of overhead in RAM usage ("extra RAM") (this must be due to some pre- and post-processing of data in h2o as one can see by looking at the GPU utilization patterns as discussed next).

For the GPU runs, it is interesting to observe the GPU utilization patterns and also the CPU utilization meanwhile (usually 1 CPU thread).

catboost uses GPU at ~80% and 1 CPU core at 100%. Unlike the other tools catboost takes all the GPU memory available when it starts training no matter of the data size (so we don't know how much memory it needs by using the standard monitoring tools).

In my previous broader benchmark of ML libraries, Spark MLlib GBT (and random forest as well) performed very poorly (10-100x running time vs top libs, 10-100x memory usage and an accuracy issue for larger data) and therefore it was not included in the current GBM/GBT benchmark. However, people might still be interested if there has been any improvements since 2016 and Spark 2.0.

With Spark 2.4.2 as of 2019-05-05 the accuracy issue for larger data has been fixed, but the speed and the memory footprint did not improve:

So Spark MLlib GBT is still 100x slower than the top tools. In case you are wondering if more nodes or bigger data would help, the answer in nope (see below).

Besides being slow, Spark also uses 100x RAM compared to the top tools. In fact, on 100M records (20GB after being loaded from disk and cached in RAM) it crashes out-of-memory even on servers with almost 1 TB RAM.

Note the situation is much better for linear models in Spark MLlib, only 3-4x slower and 10x more memory footprint vs h2o for example, see results here (and training linear models is much much faster than trees, so training times are reasonable even for large data).

Spark on a cluster

Results on a EMR cluster with master+10 slave nodes and comparison with local mode on 1 server (and "cluster" with 1 master+1 slave). To run in reasonable time only 10 trees (depth 10) have been used.

100M records data is "big" enough for Spark to be in the "at scale" modus operandi. However, the computation speed and memory footprint inefficiencies of the algorithm/implementation are so huge that no cluster of any size can really help. Furthermore larger data (billions) would mean even more prohibitively slow training (many hours/days) for any reasonable cluster size (remember, the timings above are for 10 trees, any decent GBM would need at least 100 trees).

Also, the fact that Spark has so huge memory footprint means that one can run e.g. lightgbm instead on much less RAM, so that even larger datasets would fit in the RAM of a single server. Results for lightgbm for comparison with the above Spark cluster results (10 trees):

If you don't have a GPU, lightgbm and xgboost (CPU) train the fastest.

If you have a GPU, xgboost (GPU) is very fast (and depending on the data, your hardware etc. often faster than the above mentioned lightgbm/xgboost on CPU).

If you consider deployment, h2o has the best ways to deploy as a real-time (fast scoring) application.

Note, however, there are a lot more other criteria to consider when you choose which tool to use, e.g.: