Radon is a Python tool that computes various metrics from the source code. Radon can compute:

Radon depends on as few packages as possible. Currently only mando is strictly required (for the CLI interface). colorama is also listed as a dependency but if Radon cannot import it, the output simply will not be colored.

Note: Python 2.6 was supported until version 1.5.0. Starting from version 2.0, it is not supported anymore.

Or download the source and run the setup file:

Radon can be used either from the command line or programmatically. Documentation is at https://radon.readthedocs.org/.

Actually it's even better: it's got colors! 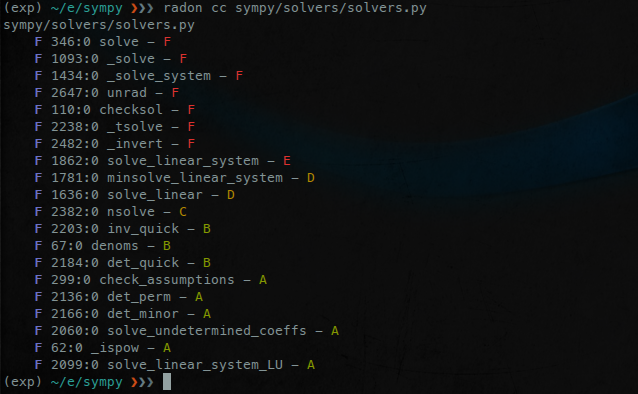 On some systems, such as Windows, the default encoding is not UTF-8. If you are using Unicode characters in your Python file and want to analyze it with Radon, you'll have to set the RADONFILESENCODING environment variable to UTF-8.

On a Continuous Integration server

If you are looking to use radon on a CI server you may be better off with xenon. Although still experimental, it will fail (that means exiting with a non-zero exit code) when various thresholds are surpassed. radon is more of a reporting tool, while xenon is a monitoring one.

If you are looking for more complete solutions, read the following sections.

Codacy uses Radon by default to calculate metrics from the source code.

Radon is available as a Code Climate Engine. To understand how to add Radon's checks to your Code Climate Platform, head over to their documentation: https://docs.codeclimate.com/v1.0/docs/radon

Radon is also supported in coala. To add Radon's checks to coala, simply add the RadonBear to one of the sections in your .coafile.

Radon can be used with .ipynb files to inspect code metrics for Python cells. Any % macros will be ignored in the metrics.

To enable scanning of Jupyter notebooks, add the --include-ipynb flag.

To enable reporting of individual cells, add the --ipynb-cells flag.