The default Go implementation of sync.RWMutex does not scale well to multiple cores, as all readers contend on the same memory location when they all try to atomically increment it. This repository provides an n-way RWMutex, also known as a "big reader" lock, which gives each CPU core its own RWMutex. Readers take only a read lock local to their core, whereas writers must take all locks in order.

Note that the current implementation only supports x86 processors on Linux; other combinations will revert (automatically) to the old sync.RWMutex behaviour. To support other architectures and OSes, the appropriate cpu_GOARCH.go and cpus_GOOS.go files need to be written. If you have a different setup available, and have the time to write one of these, I'll happily accept patches.

To determine which lock to take, readers use the CPUID instruction, which gives the APICID of the currently active CPU without having to issue a system call or modify the runtime. This instruction is supported on both Intel and AMD processors; ARM CPUs should use the CPU ID register instead. For systems with more than 256 processors, x2APIC must be used, and the EDX register after CPUID with EAX=0xb should be used instead. A mapping from APICID to CPU index is constructed (using CPU affinity syscalls) when the program is started, as it is static for the lifetime of a process. Since the CPUID instruction can be fairly expensive, goroutines will also only periodically update their estimate of what core they are running on. More frequent updates lead to less inter-core lock traffic, but also increases the time spent on CPUID instructions relative to the actual locking.

Stale CPU information. The information of which CPU a goroutine is running on might be stale when we take the lock (the goroutine could have been moved to another core), but this will only affect performance, not correctness, as long as the reader remembers which lock it took. Such moves are also unlikely, as the OS kernel tries to keep threads on the same core to improve cache hits.

There are many parameters that affect the performance characteristics of this scheme. In particular, the frequency of CPUID checking, the number of readers, the ratio of readers to writers, and the time readers hold their locks, are all important. Since only a single writer is active at the time, the duration a writer holds a lock for does not affect the difference in performance between sync.RWMutex and DRWMutex.

Experiments show that DRWMutex performs better the more cores the system has, and in particular when the fraction of writers is <1%, and CPUID is called at most every 10 locks (this changes depending on the duration a lock is held for). Even on few cores, DRWMutex outperforms sync.RWMutex under these conditions, which are common for applications that elect to use sync.RWMutex over sync.Mutex.

The plot below shows mean performance across 30 runs (using experiment) as the number of cores increases using: 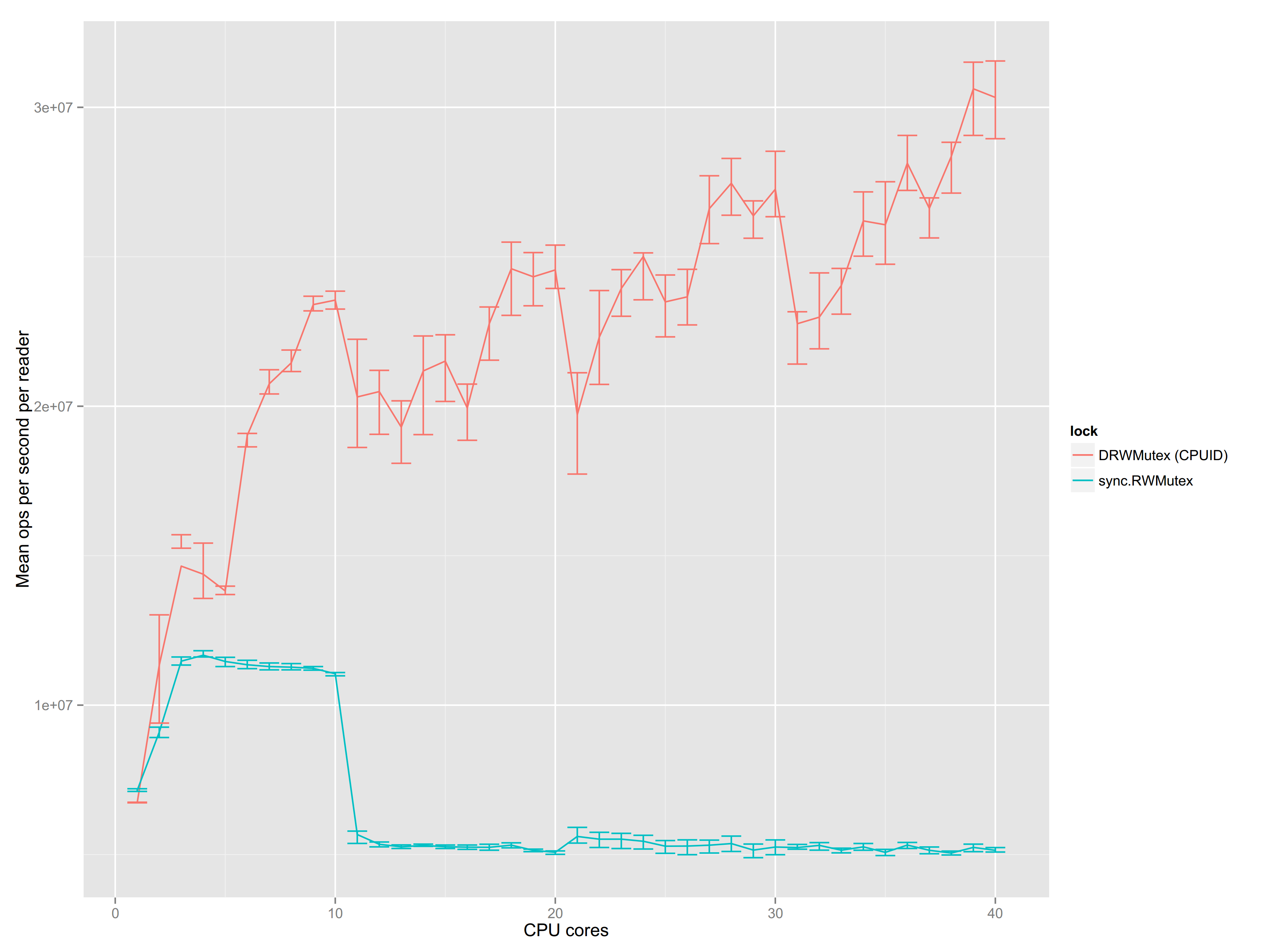 Error bars denote 25th and 75th percentile. Note the drops every 10th core; this is because 10 cores constitute a NUMA node on the machine the benchmarks were run on, so once a NUMA node is added, cross-core traffic becomes more expensive. Performance increases for DRWMutex as more readers can work in parallel compared to sync.RWMutex.

Get A Weekly Email With Trending Projects For These Topics
No Spam. Unsubscribe easily at any time.
go (14,426)
golang (3,675)
synchronization (84)
scalability (60)