This project is a KDAB R&D effort to create a standalone GUI for performance data. As the first goal, we want to provide a UI like KCachegrind around Linux perf. Looking ahead, we intend to support various other performance data formats under this umbrella.

Here are some screenshots showing the most important features of hotspot in action:

The main feature of hotspot is visualizing a perf.data file graphically. 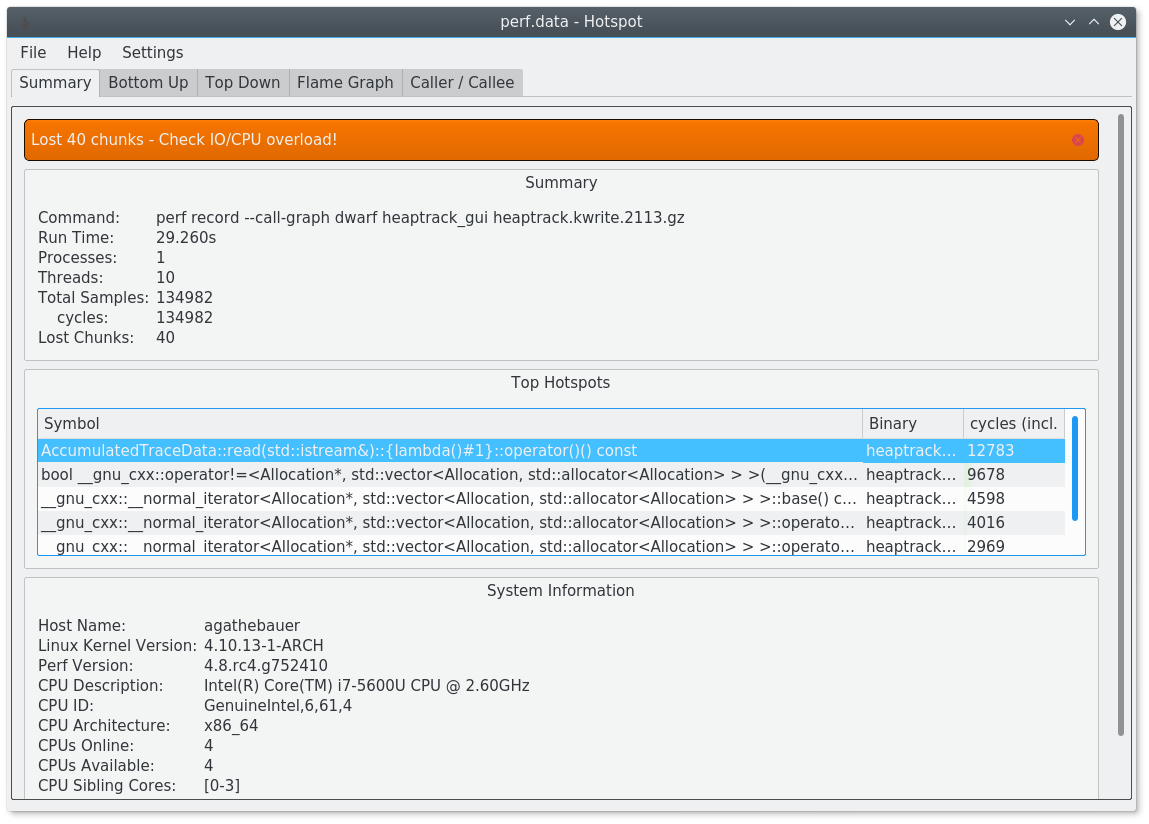 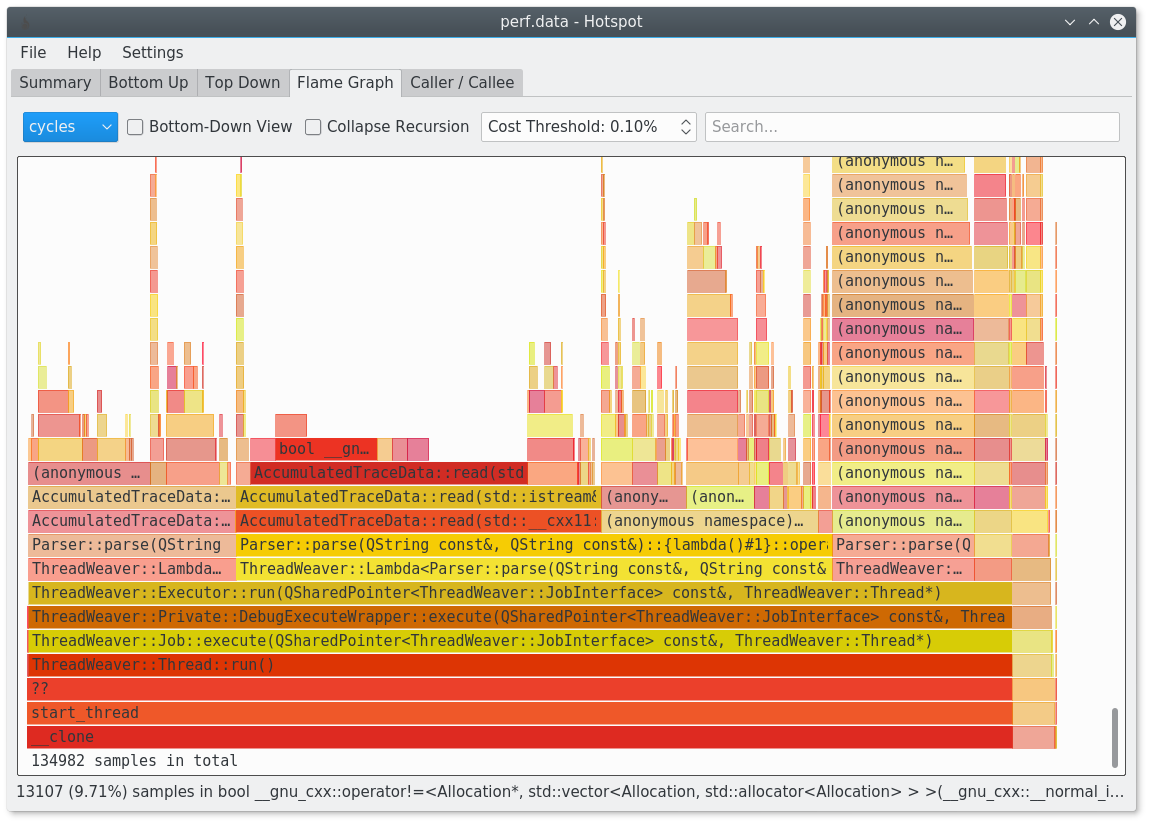 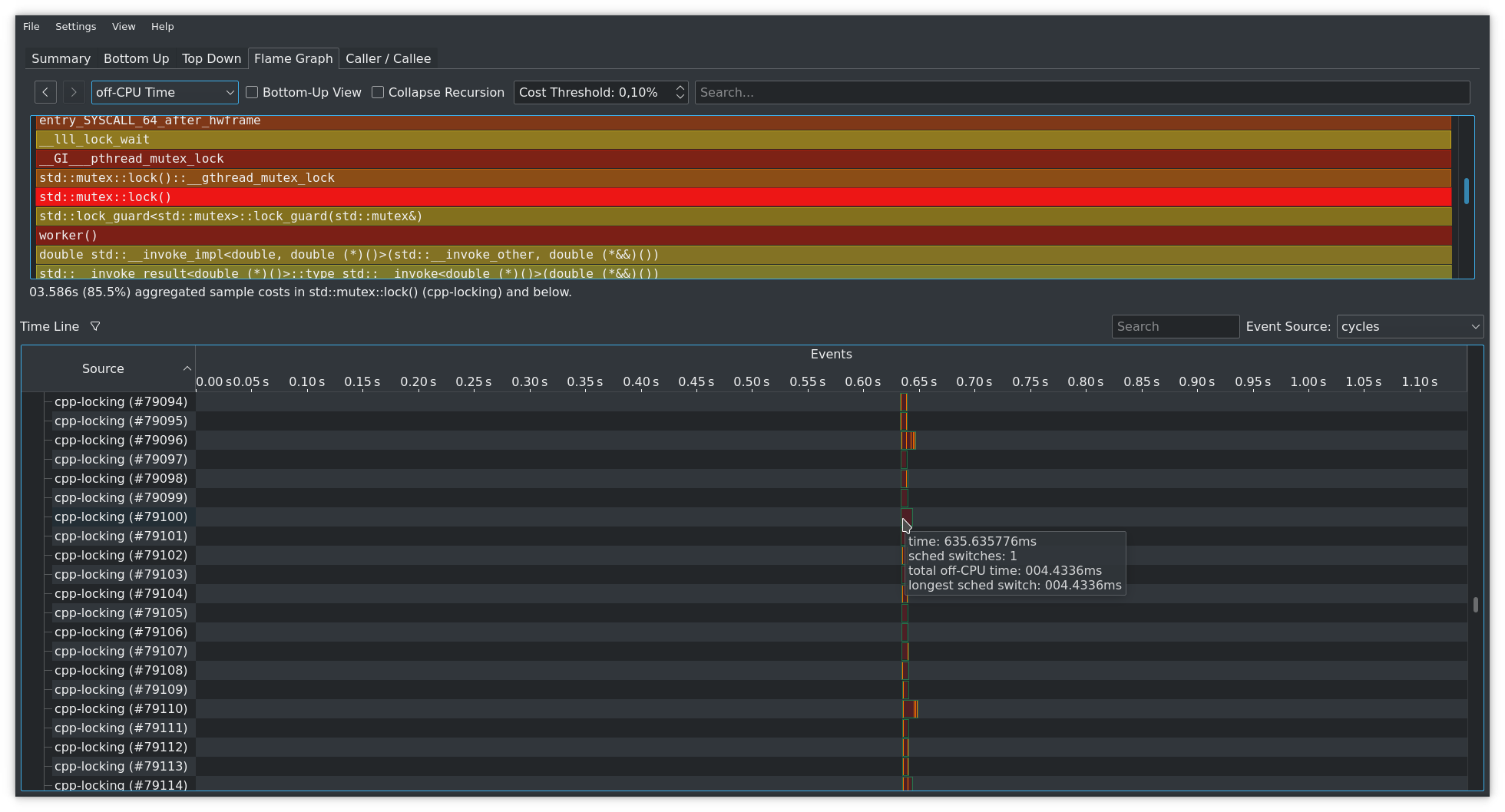 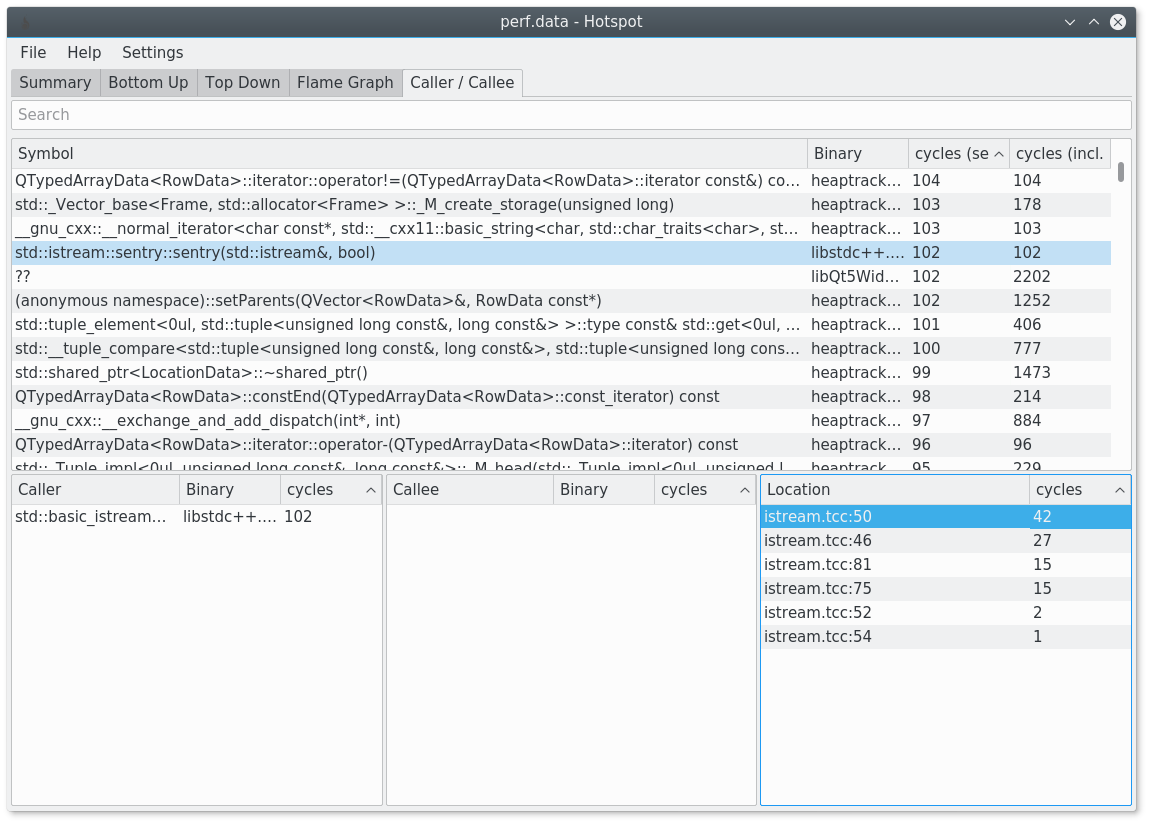 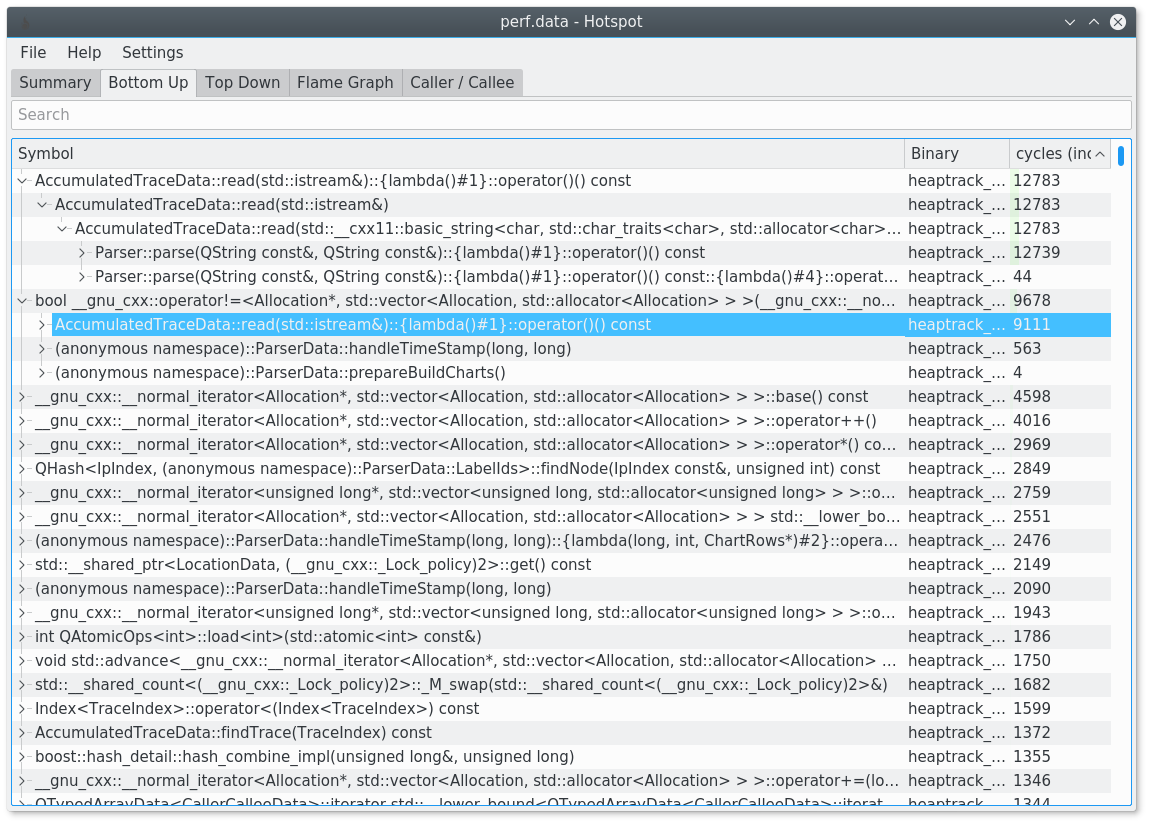 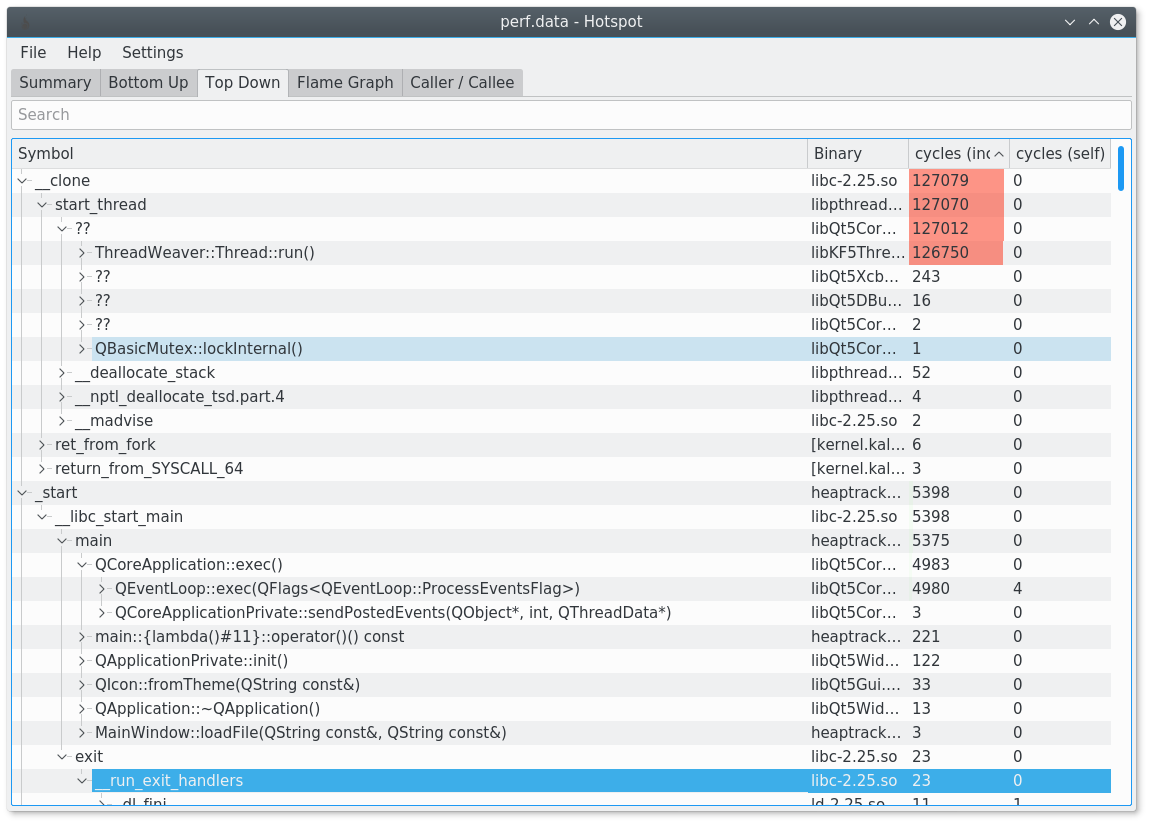 The time line allows filtering the results by time, process or thread. The data views will update accordingly. 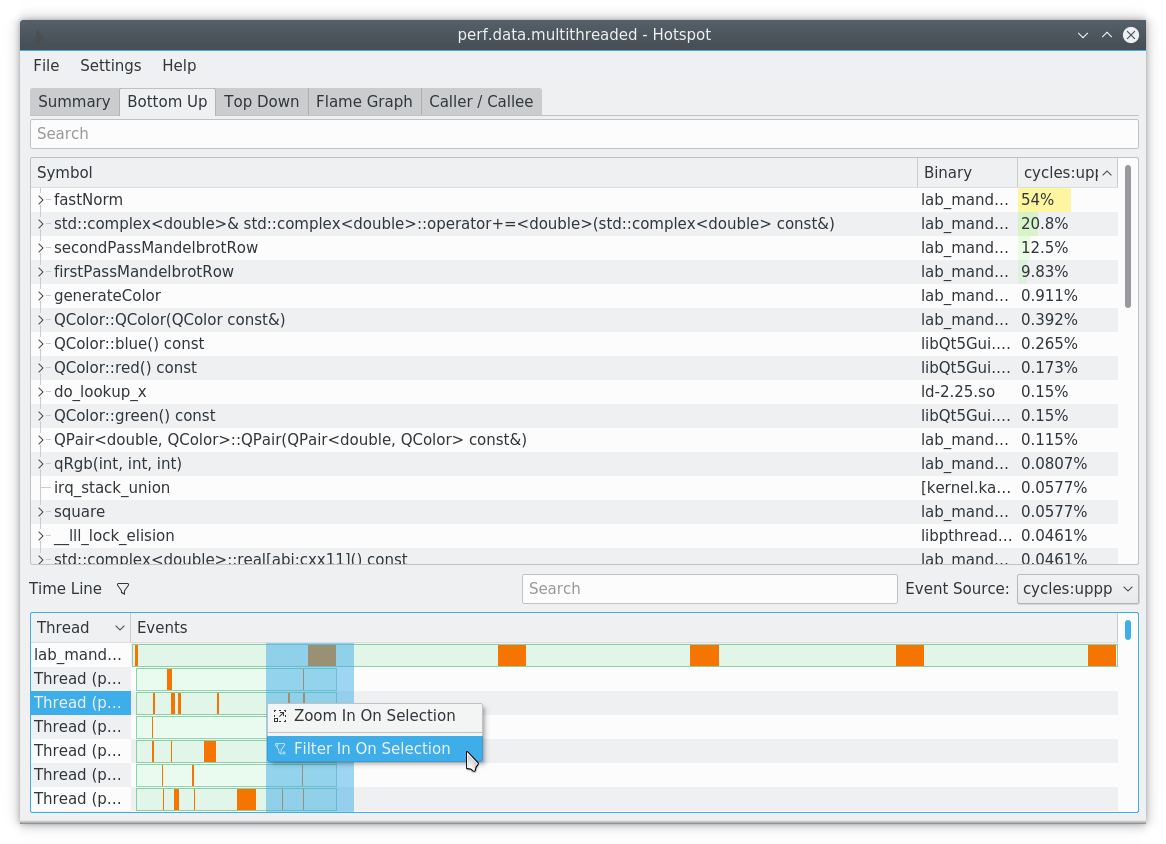 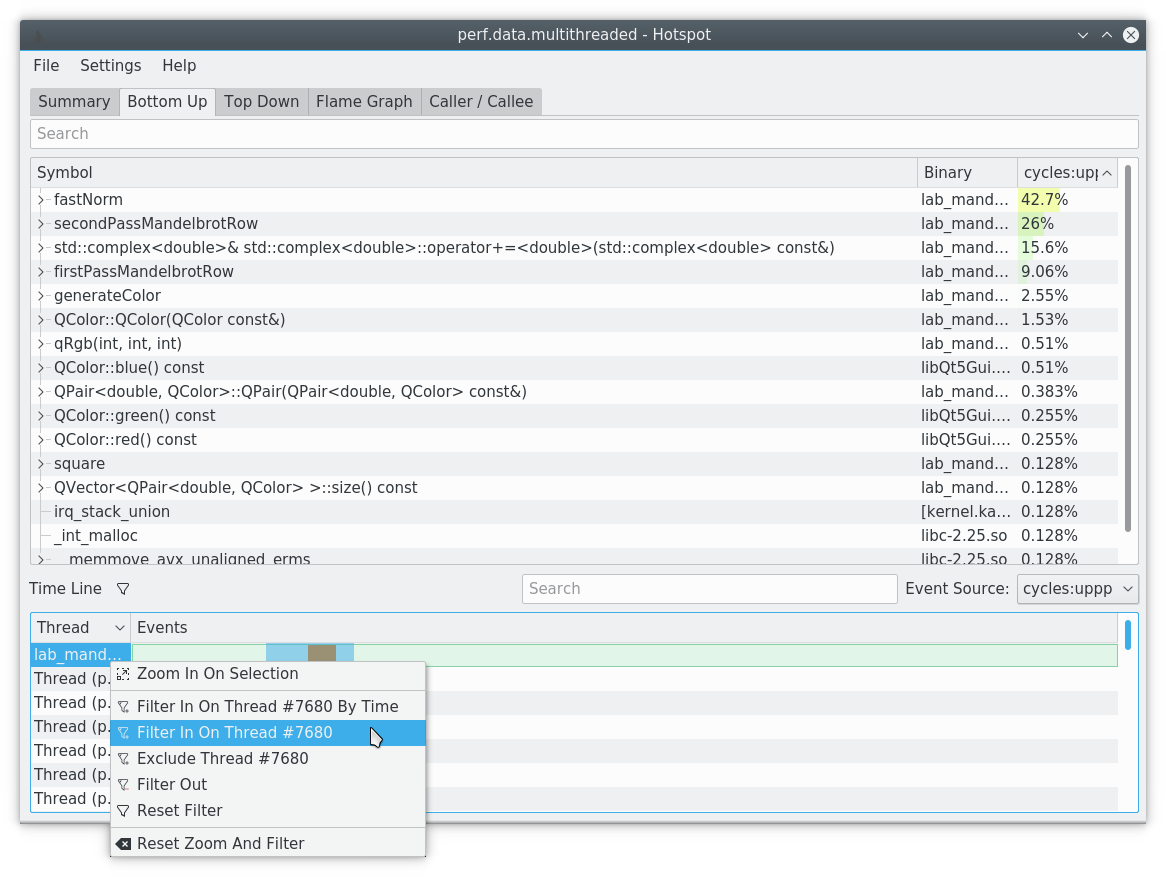 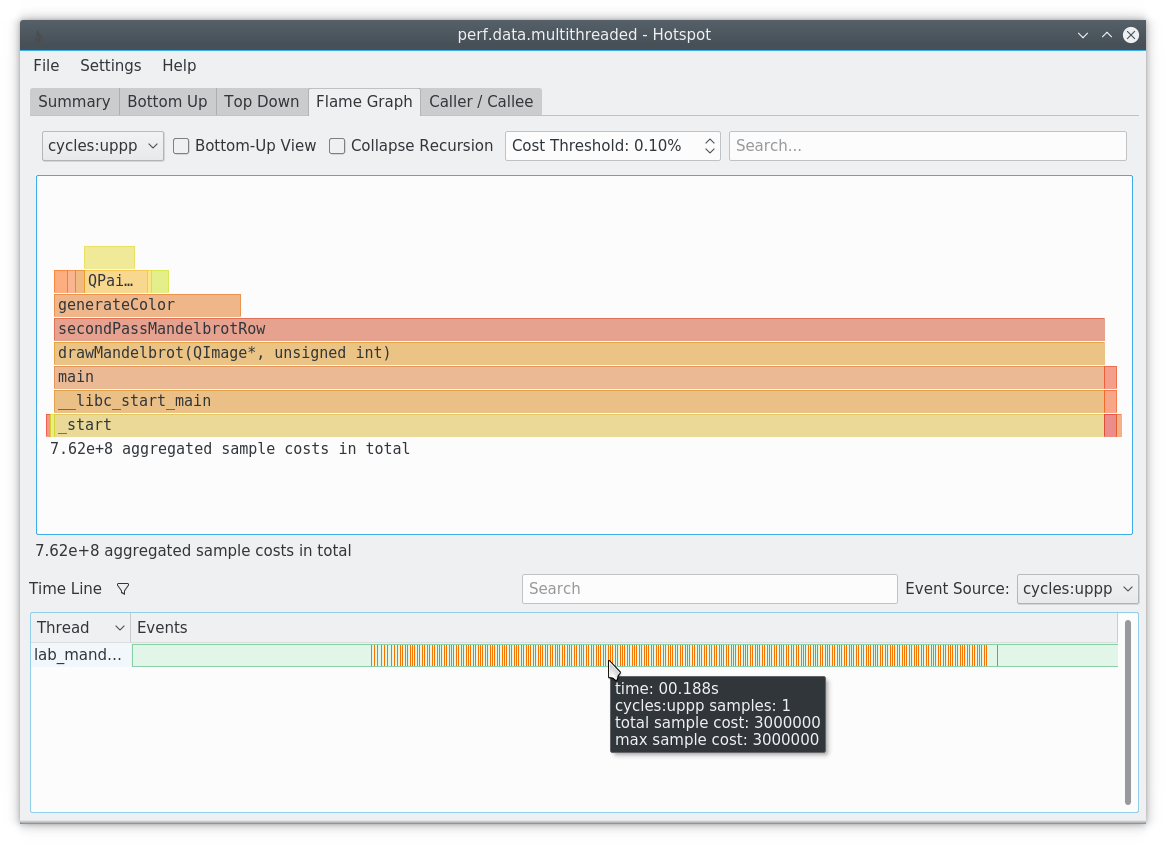 You can also launch perf from hotspot, to profile a newly started application or to attach to already running process(es). Do take the caveats below into account though. 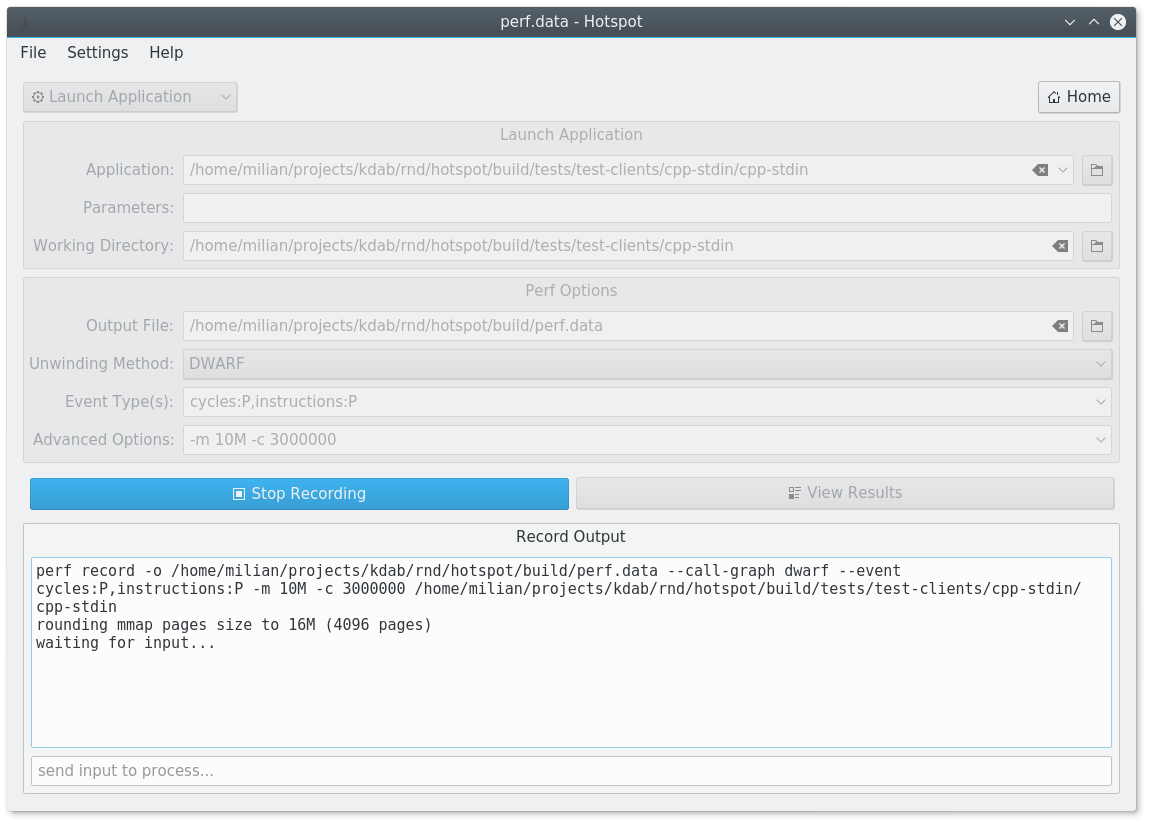 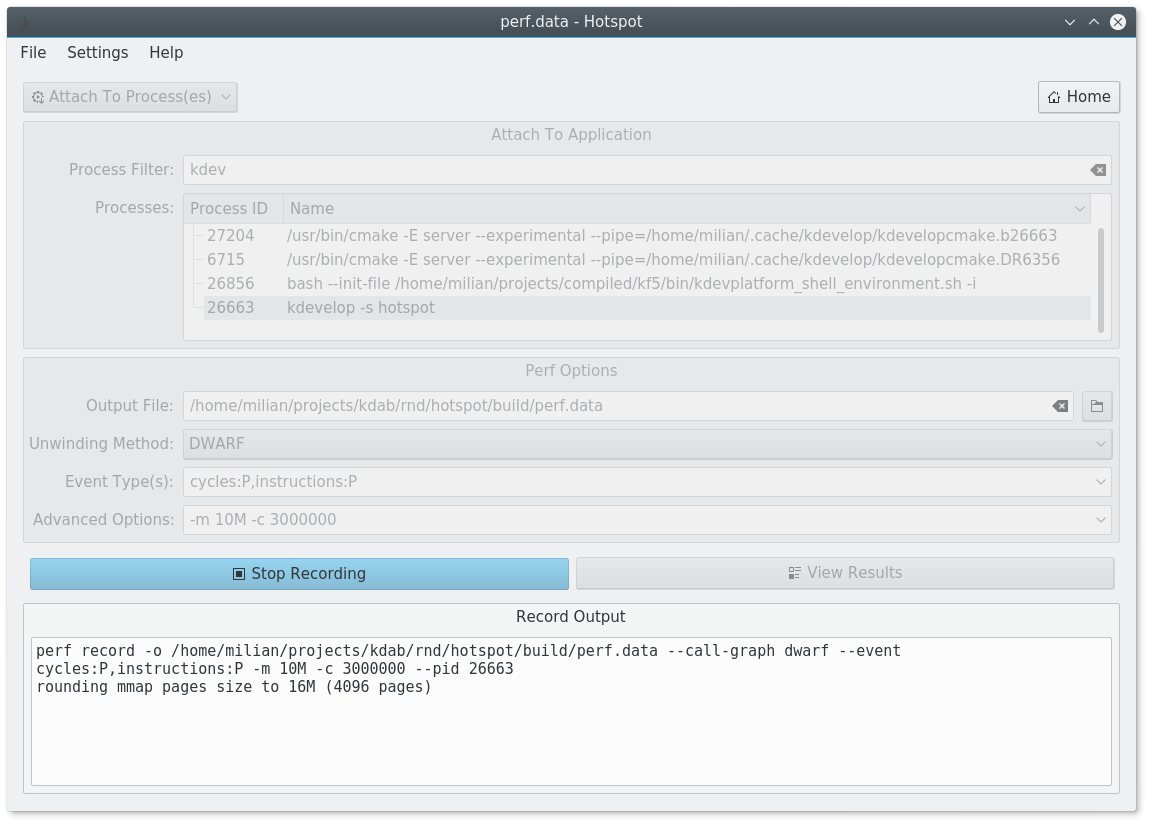 Building hotspot from source gives you the latest and greatest, but you'll have to make sure all its dependencies are available. Most users should probably install hotspot from the distro package manager or as an AppImage.

As of now, you will need the following dependencies to build this project:

If you need help building this project for your platform, contact us for help.

Note: Hotspot is not yet packaged on all Linux distributions. In such cases, or when you want to use the latest version, please use the AppImage which will work on any recent Linux distro just fine.

hotspot is available in AUR (https://aur.archlinux.org/packages/hotspot).

hotspot ebuilds are available from our overlay (https://github.com/KDAB/kdab-overlay).

hotspot is available in Fedora repositories.

For any Linux distro: AppImage

Please use the latest Continuous release to get the most recent version. If it doesn't work, please report a bug and test the latest stable version.

Note: Your system libraries or preferences are not altered. In case you'd like to remove Hotspot again, simply delete the downloaded file. Learn more about AppImage here.

First of all, record some data with perf. To get backtraces, you will need to enable the dwarf callgraph mode:

Now, if you have hotspot available on the same machine, all you need to do is launch it. It will automatically open the perf.data file in the current directory (similar to perf report). Alternatively, you can specify the path to the data file on the console:

Hotspot supports a very powerful way of doing wait-time analysis, or off-CPU profiling. This analysis is based on kernel tracepoints in the linux scheduler. By recording that data, we can find the time delta during which a thread was not running on the CPU, but instead was off-CPU. There can be multiple reasons for that, all of which can be found using this technique:

By leveraging kernel trace points in the scheduler, the overhead is pretty manageable and we only pay a price, when the process is actually getting switched out. Most notably we do not pay a price when e.g. a mutex lock operation can be handled directly in user-space.

To do off-CPU analysis with hotspot, you need to record the data with a very specific command:

Alternatively, you can use the off-CPU check box in hotspot's integrated record page.

During the analysis, you can then switch between the "cycles" cost view for on-CPU data to the "off-CPU time" cost view for wait-time analysis. Often, you will want to change between both, e.g. to find places in your code which may require further parallelization (see also Amdahl's law).

The "sched:sched_switch" cost will also be shown to you. But in my opinion that is less useful, as it only indicates the number of scheduler switches. The length of the time inbetween is often way more interesting to me - and that's what is shown to you in the "off-CPU time" metric.

It's OK if your embedded machine is using a different platform than your host. On your host, do the following steps then to analyze the data:

If you manually deployed an application from a path outside your sysroot, do this instead:

If your application is also using libraries outside your sysroot and the appPath, do this:

And, worst-case, if you also use split debug files in non-standard locations, do this:

The perf.data file format is not self-contained. To analyze it, you need access to the executables and libraries of the profiled process, together with debug symbols. This makes it unwieldy to share such files across machines, e.g. to get the help from a colleague to investigate a performance issue, or for bug reporting purposes.

Hotspot allows you to export the analyzed data, which is then fully self-contained. This feature is accessible via the "File > Save As" menu action. The data is then saved in a self-contained *.perfparser file. To import the data into hotspot again, just open that file directly in place of the original perf.data file.

Note: The file format is not yet stable. Meaning data exported by one version of hotspot can only be read back in by the same version. This problem will be resolved in the future, as time permits.

If anything breaks in the above and the output is less usable than perf report, please report an issue on GitHub. That said, there are some known issues that people may trip over:

Unwinding the stack to produce a backtrace is a dark art and can go wrong in many ways. Hotspot relies on perfparser (see below), which in turn relies on libdw from elfutils to unwind the stack. This works quite well most of the time, but still can go wrong. Most notably, unwinding will fail when:

Compared to perf report, hotspot misses a lot of features. Some of these are planned to be resolved in the future. Others may potentially never get implemented. But be aware that the following features are not available in hotspot currently:

It is not a good idea to launch hotspot with sudo or as root user. See e.g. Editing Files As Root for an article on that matter. Issue #83 is also relevant in this contact.

But without superuser rights, you may see error messages such as the following when using hotspot's record feature:

To workaround this limitation, hotspot can temporarily elevate the perf privileges. This is achieved by applying these steps, bundled into a script that is run via pkexec, kdesudo or kdesu. The resulting elevated privileges are also required for kernel tracing in general and Off-CPU profiling in particular.

The current data export is limited to a format that can only be read back by hotspot of the same version. This makes interop with other visualization tools quasi impossible. This is known and will get improved in the future. Most notably support for export to web viewers such as perfetto or the Mozilla profiler is planned but not yet implemented. Patches welcome!

This project leverages the excellent perfparser utility created by The Qt Company for their Qt Creator IDE. If you are already using Qt Creator, consider leveraging its integrated CPU Usage Analyzer.

Hotspot is dual-licensed under the GPL v2+ or under a commercial KDAB license. See LICENSE.GPL.txt, LICENSE.txt and LICENSE.US.txt for more information, or contact [email protected] if any conditions of this licensing are not clear to you.