The GenomeTools genome analysis system is a free collection of bioinformatics tools (in the realm of genome informatics) combined into a single binary named gt. It is based on a C library named libgenometools which contains a wide variety of classes for efficient and convenient implementation of sequence and annotation processing software. 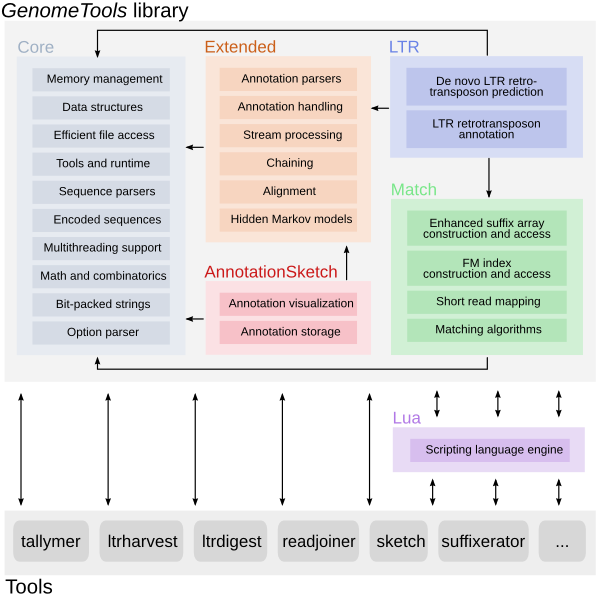 If you are interested in gene prediction, have a look at GenomeThreader.

GenomeTools has been designed to run on every POSIX compliant UNIX system, for example, Linux, macOS, and OpenBSD.

If Homebrew is installed, GenomeTools can be installed on supported macOS versions using brew:

To use GenomeTools on systems that do not have native packages, or to modify GenomeTools at build time, you need to build from source. Source tarballs are available from GitHub. For instructions on how to build the source by yourself, have a look at the INSTALL file. In most cases (e.g. on a 64-bit Linux system) something like

should suffice. On 32-bit systems, add the 32bit=yes option. Add cairo=no if you do not have the Cairo libraries and their development headers installed. This will, however, remove AnnotationSketch support from the resulting binary. When your binary has been built, use the install target and prefix option to install the compiled binary on your system. Make sure you repeat all the options from the original make run. So

would install the software in the gt subdirectory in the current user's home directory. If no prefix option is given, the software will be installed system-wide (requires root access).

GenomeTools uses a collective code construction contract for contributions (and the process explains how to submit a patch). Basically, just fork this repository on GitHub, start hacking on your own feature branch and submit a pull request when you are ready. Our recommended coding style is explained in the developer's guide (among other technical guidelines).

To report a bug, ask a question, or suggest new features, use the GenomeTools issue tracker.