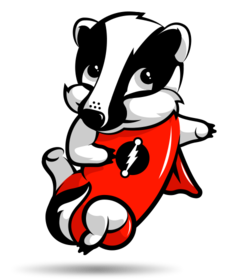 BadgerDB is an embeddable, persistent and fast key-value (KV) database written in pure Go. It is the underlying database for Dgraph, a fast, distributed graph database. It's meant to be a performant alternative to non-Go-based key-value stores like RocksDB.

Use Discuss Issues for reporting issues about this repository.

Badger is stable and is being used to serve data sets worth hundreds of terabytes. Badger supports concurrent ACID transactions with serializable snapshot isolation (SSI) guarantees. A Jepsen-style bank test runs nightly for 8h, with --race flag and ensures the maintenance of transactional guarantees. Badger has also been tested to work with filesystem level anomalies, to ensure persistence and consistency. Badger is being used by a number of projects which includes Dgraph, Jaeger Tracing, UsenetExpress, and many more.

The list of projects using Badger can be found here.

Badger v2.0 was released in Nov 2019 with a new storage format which won't be compatible with all of the v1.x. Badger v2.0 supports compression, encryption and uses a cache to speed up lookup.

The Changelog is kept fairly up-to-date.

For more details on our version naming schema please read Choosing a version.

This will retrieve the library.

Download and extract the latest Badger DB release from https://github.com/dgraph-io/badger/releases and then run the following commands.

This will install the badger command line utility into your $GOBIN path.

BadgerDB is a pretty special package from the point of view that the most important change we can make to it is not on its API but rather on how data is stored on disk.

This is why we follow a version naming schema that differs from Semantic Versioning.

For a longer explanation on the reasons behind using a new versioning naming schema, you can read VERSIONING.md.

Badger Documentation is available at https://dgraph.io/docs/badger

Badger was written with these design goals in mind:

Badger’s design is based on a paper titled WiscKey: Separating Keys from Values in SSD-conscious Storage.

1 The WISCKEY paper (on which Badger is based) saw big wins with separating values from keys, significantly reducing the write amplification compared to a typical LSM tree.

2 RocksDB is an SSD optimized version of LevelDB, which was designed specifically for rotating disks. As such RocksDB's design isn't aimed at SSDs.

4 Badger provides direct access to value versions via its Iterator API. Users can also specify how many versions to keep per key via Options.

We have run comprehensive benchmarks against RocksDB, Bolt and LMDB. The benchmarking code, and the detailed logs for the benchmarks can be found in the badger-bench repo. More explanation, including graphs can be found the blog posts (linked above).

Below is a list of known projects that use Badger:

If you are using Badger in a project please send a pull request to add it to the list.

If you're interested in contributing to Badger see CONTRIBUTING.md.