This project contains the models used for the experiments in the paper:

In this work, we provide a systematic study to the prevailing ResNet architecture by showing a connection from a general deeply-fused net view to ensembling.

Our empirical results uncover that the deepest network among the ensemble components does not contribute the most significantly to the overall performance and instead it provides a manner to introduce many layers and thus guarantee the ensemble size.

Guided by the above study and observation, we develop a new deeply-fused network that combines two networks in a merge-and-run fusion manner. 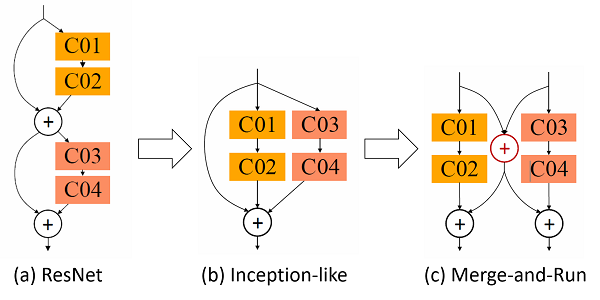 Our approach demonstrates consistent improvements over the ResNet with the comparable setup on CIFAR-10, CIFAR-100, SVHN, and ImageNet.

You can prepare the *.rec file by yourself, or simply download the Cifar dataset from data.dmlc.ml or my google drive (recommended), which includes both Cifar and SVHN datasets. For ImageNet dataset, follow the mxnet official document to prepare.

For example, running the following command can train the DFN-MR network (we call it cross in the coding stage) on Cifar-10.

If you want to show the network architecture, run the following command to visualize the network.

You will obtain a picture half_d26.png in the visualize folder, and more examples can be found there.

Note that you may need to install graphviz for visualization.

The training log are saved to snapshot folder, and you can use get_results.py to obtain the final result of multiple runs in the format of median (mean +/- std, best).

Please cite our papers on deep fusion in your publications if it helps your research: