A Python script to help Macintosh administrators manage the firmware passwords of their computers.

If you have any comments, questions, or other input, either file an issue or send us an email. Thanks!

Place the script (or binary) in a root-executable location. We use /usr/local/sbin/. Make sure it is executable.

In a nutshell, the firmware password in Apple computers prevents non-privileged users from booting from a foreign device.

The firmware password is one of three interlocking methods used to secure Apple computers. The other two are: using strong passwords on user accounts and FileVault to apply full disk encryption (FDE). Strong account passwords are always the first line of defense. FDE effectively scrambles the information written a storage device and renders it unreadable by unauthorized persons. Using all three methods can make a computer unusable should it be lost or stolen.

Depending on the age of computer, removing the firmware password can be easy or incredibly difficult, please refer to the Notes section for more information about removing the password.

When I began this project there wasn't a solution available for actively managing firmware passwords, other than the "set-it-and-forget-it" method. This approach seems error-prone and difficult to maintain beyond more than a small handful of machines. My solution centers on maintaining a single list of current and formerly used passwords that I call the keyfile. This approach allows the administrator to easily bring any number of machines up to the current password, and identify those whose firmware passwords aren't in the master list and need additional maintenance.

Version 2 represents a complete rewrite of Firmware Password Manager (FWPM). The previous version, a shell script, always felt brittle to me. The new version is written in Python. I also focused on utilizing firmwarepasswd, rather than the outdated setregproptool.

A hash can be thought of as the finger print of a file. The goal of a hash function is that no two files will share the same hash value. FWPM uses SHA-256 to generate the hash, or the SHA-2 hash function at a length of 256 bits (32 bytes). Rather than simply hashing the password itself, FWPM hashes the entire keyfile for additional security.

Here is the default configuration file included with FWPM:

The configuration file is broken up into sections roughly approximating the command line flags used in the previous versions.

The script requires a specific format for the keyfile. Each line contains the following: a note string, a colon, and a password string. I assume the newest passwords will be at the end of the file, and the script will try those first. Only the new note has a special meaning, others are ignored.

Here is the keyfile format:

The keyfile contains, of course, incredibly sensitive information. When the script successfully completes or encounters an error, it attempts to securely delete the keyfile from the disk.

We make heavy use of Slack in our office. The use_slack option directs FWPM to send informational messages to a slack channel. You simply need to add the URL and channel information for your Slack group to the script. Please see Slack's documentation for additional configuration options: https://api.slack.com/incoming-webhooks 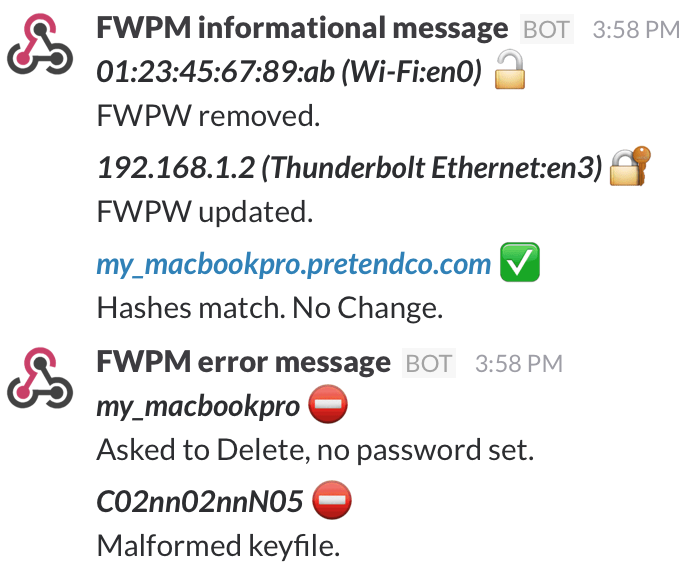 The slack_identifier option allows you to select how machines are identified in Slack messages. This feature request was issue #2. These flags are mutually exclusive.

To make the most of FWPM, we suggest using the management_string_type flag to store the hash of the keyfile used to create the current firmware password. This allows you to use a variety of tools to remotely check the status of the firmware password on a machine. Using this flag the script will create an SHA-2 hash of the new keyfile and store it in non-volitile RAM (nvram) when the password is changed. The hash can then be accessed locally through the terminal or remotely with SSH, ARD or other tool.

The custom_string flag allows you to define any string to place in nvram. You could record the date the password was changed last or a cryptic hint to help you remember the password in the future (not recommended).

FWPM was originally written to work with our unique management system. During the python rewrite, I made an effort to make FWPM independent of any specific administration philosophy and making it easier to integrate into future management solutions. I've included sample scripts for integrating FWPM into JAMF Casper, UNIX and ARD. The source is included in the example scripts folder.

You will need a policy to ensure that the FWPM binary is installed on each of your client machines.

The controller script directs the automated configuration and launch of FWPM. It contains the new and old firmware passwords, the logic to error check and create an obfuscated keyfile and configuration file, and launches FWPM.

Please see the previous discussion of the configuration file for info on these values.

We can leverage the nvram string and smart groups in JAMF Casper to automate the distribution of an updated keyfile package and direct clients to change their firmware passwords. We do this by defining an extension attribute (EA) in the JSS. We've included the script we run in the repository for FWPM 2.0.

The EA script runs during recon and pushes the hash up to the JSS. We then define a smart group that contains any machine not sharing the same hash as the current keyfile. This makes it possible to apply a policy directing those machines to download the new keyfile package and run FWPM.

The following image shows the EA page in the JSS: 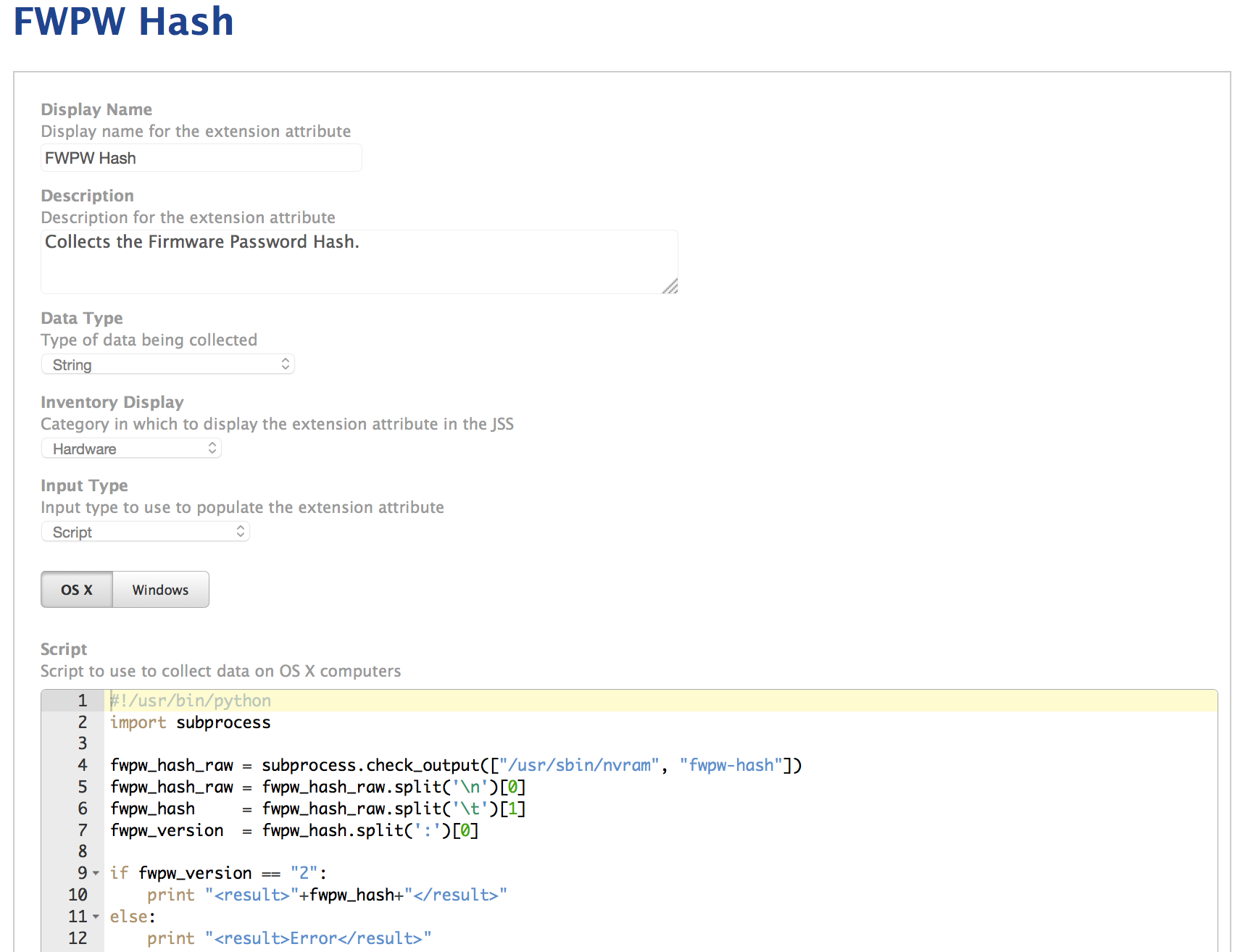 Here is how the smart groups are built:

Skeleton Key was written to add a GUI to the firmwarepasswd command and Firmware Password Manager and give it mulitple ways to obtain the keylist file. Skeleton Key is designed to be used by technicians with limited experience or access. 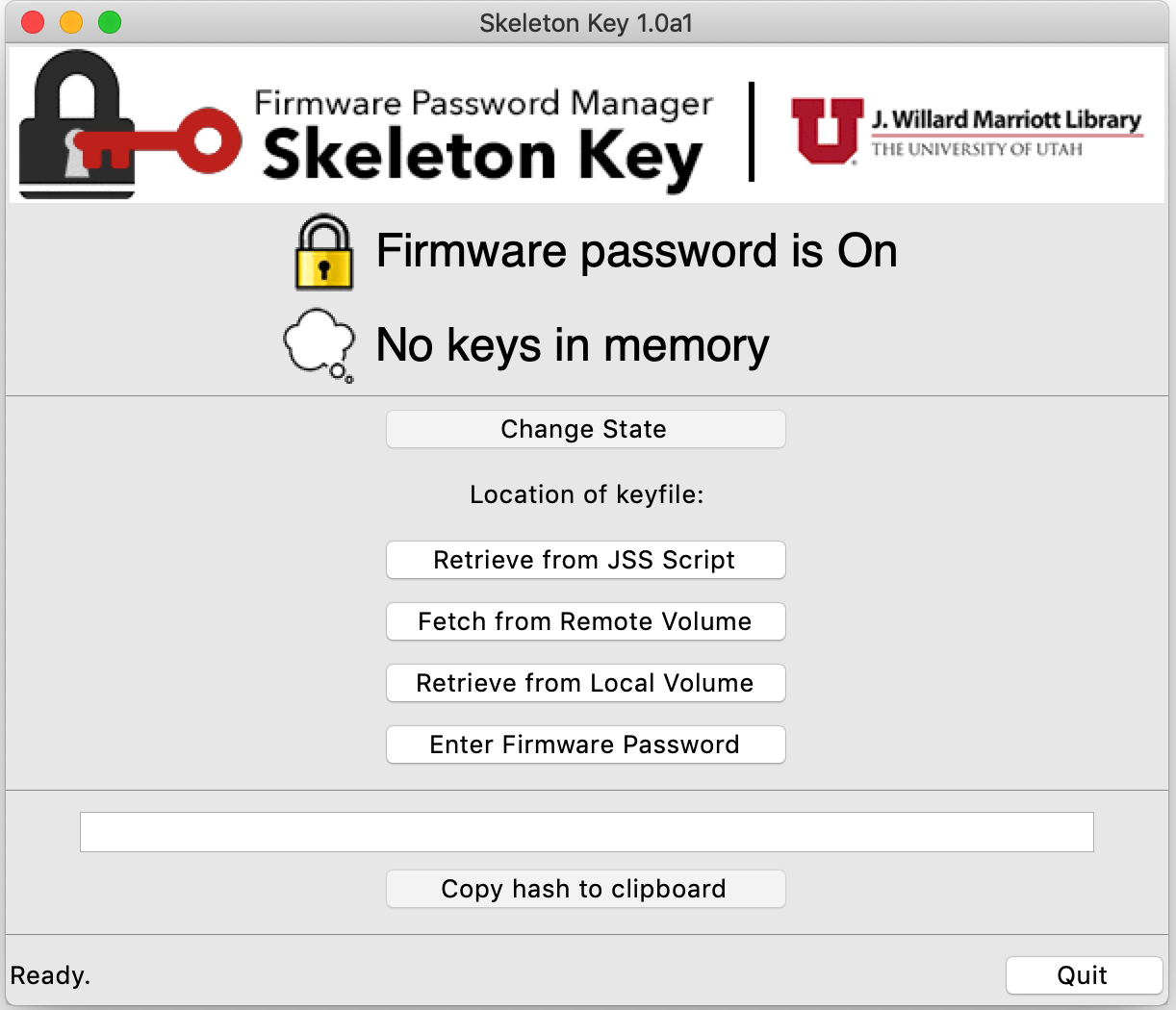 Upon launching Skeleton Key, you must enter a valid administrator password to proceed.

You may also see the following message, press OK to continue.

This is the main interface for Skeleton Key. It can be broken down into three areas: Current State, Modifiers and Status messages. 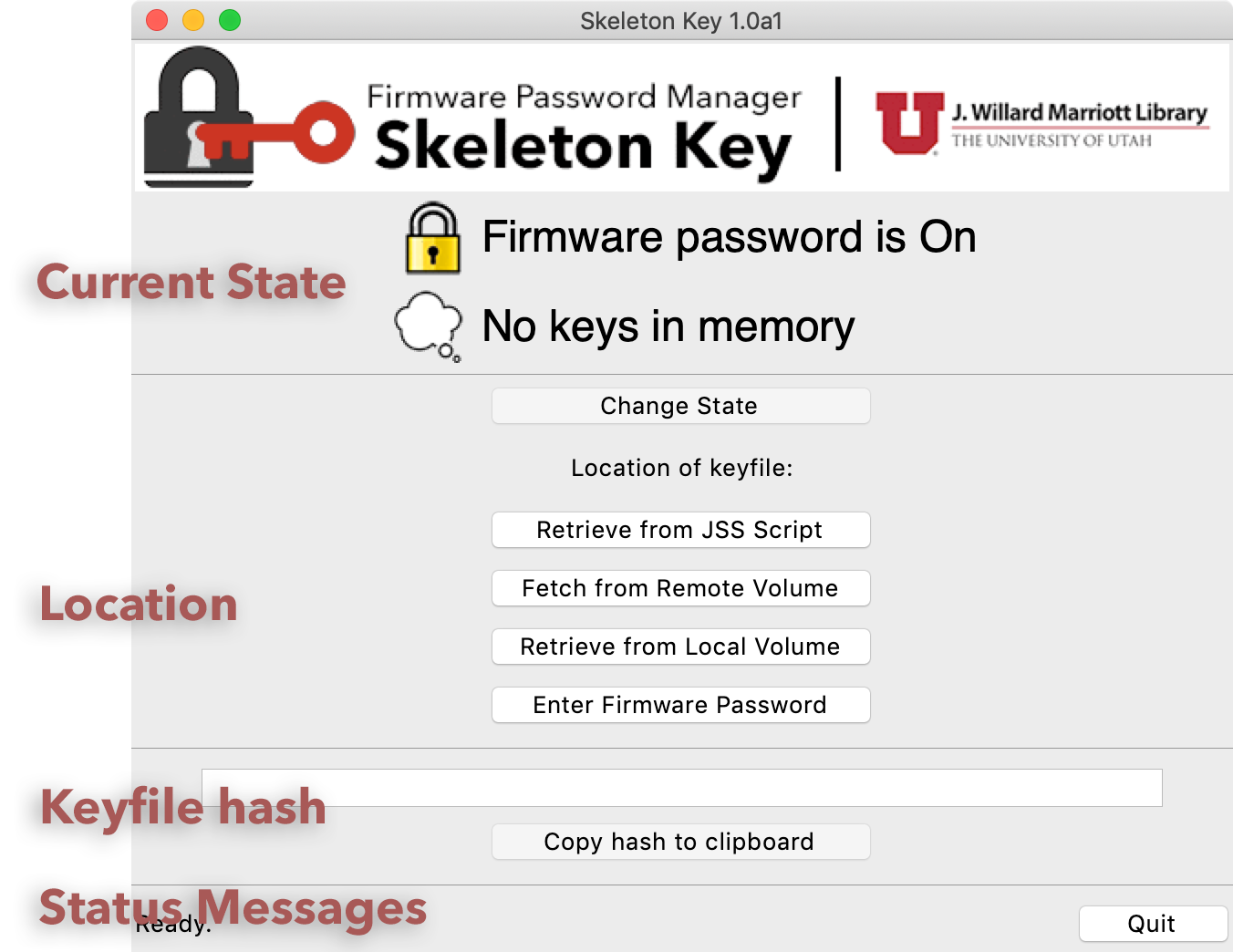 The Current State area will tell you if there is a Firmware password in place, and if the keyfile you have given it was read correctly.

The Location area is where you will specify the location of the keyfile you wish to use. You can copy it directly from the JSS FWPM controller script, from a remote file share, from a local disk or entered directly into the application.

This option allows you to specify the JAMF server that contains the FWPM Controller script for your environment. Skelton Key will parse the script and find the keylist automatically.

This option allows you to specify a remote SMB or AFS file share where your keylist is located. Enter the complete URL, username and password.

A standard MacOS X Open File dialog will appear allowing you to navigate to your keyfile.

This option allows you to directly enter the current or new firmware password of the machine.

When a keyfile is read successfully into memory, the hash will appear here. The hash is used in the JAMF Smart Group, to tell which machines are up to date and which need to be updated.

Any informational or error messages will appear in this location.

If you have forgotten the firmware password for a machine your available options depend upon the age of the machine.

Only Apple Retail Stores or Apple Authorized Service Providers can unlock the following Mac models when protected by a firmware password:

If you can't remember your firmware password or passcode, schedule an in-person service appointment with an Apple Store or Apple Authorized Service Provider. Bring your Mac to the appointment, and bring your original receipt or invoice as proof of purchase.

If you have an earlier machine, it's much easier:

Thank you to macmule for http://macmule.com/2014/05/11/ea-check-efi-password-state/, which helped me get things working in version 1.