Free and open-source. Built with Next.js

React Storefront (RSF) utilizes headless architecture allowing you to easily replace your legacy frontend and connect via APIs to any eCommerce platform or backend system. React Storefront extends Next.js to include everything you need for an eCommerce storefront. Try The Tie Bar, Akira, and 1-800-FLOWERS.COM on your phone to see how fast sites on RSF can be!

React Storefront goes the extra mile to squeeze speed out of every possible real and user-perceived performance optimization including:

React Storefront takes a bold new approach that values developer productivity, so you can get more done in less time:

React Storefront is and always will be open-source. Anyone can use and support the project. The goal of RSF is to improve the online shopping experience for everyone.

We are looking for Contributors and Designers willing to help us in the solution development.

React Storefront can be easily integrated with any eCommerce platform via APIs. 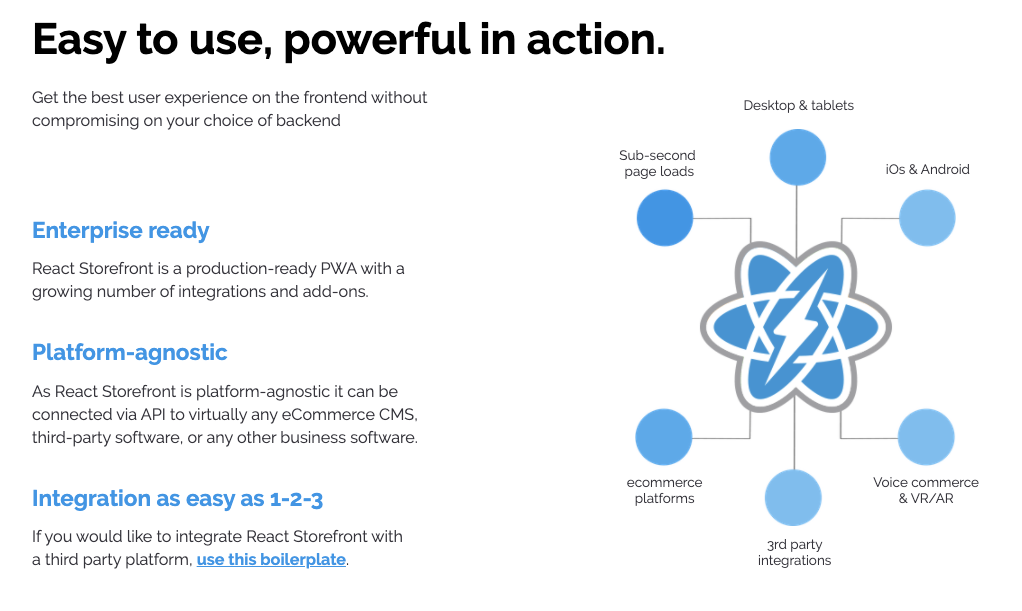 To create a new React Storefront app, ensure node 10 or newer is installed and run:

Once your app has been created, you can start it in development mode by running:

If you like to contribute please feel free to Raise an issue with a bug or feature request report, or just open a Pull Request with the proposed changes.

After cloning the repo, run:

To use your local clone of react-storefront in projects, use yalc.

To publish react-storefront to your local yalc store:

Then run the following to push updated builds to yalc store on changes.

Finally, in your project run:

This will change your project's package.json to use a file path in the dependency entry for react-storefront. To revert this change, run:

Join the community on Slack

If you have any questions or ideas feel free to join our Slack: invitation link

The documentation is always THE HARDEST PART of each open-source project! But we're trying hard :-) Full Guides, API Documentation, and Examples

React Storefront is and always will be open-source, released under Apache2 Licence.

Try it on the Layer0. Deploy it anywhere.

Like any Next.js project, React Storefront is deployable to any environment that runs Node.js. The easiest way to test drive and deploy React Storefront is on Layer0, a serverless PaaS that helps developers optimize speed across the entire stack to deliver sub-second dynamic websites. A free tier is available.

RSF was created by a group of eCommerce site, eCommerce agency, and eCommerce platform engineers.

Partners are encouraged to support the project in various ways - mostly by contributing to the source code, marketing activities, evangelizing and of course - implementing the production projects. We do support our partners by dedicated contact channels, workshops and by sharing the leads from merchants interested in implementations.