⚠️ Hooray! Rubotnik is now a gem that can generate a project for you and serve it from localhost or Heroku. There's been some API changes since it has been a boilerplate. If you are looking for an old README and rubotnik-boilerplate's code you can find it here.

Only minimal Ruby knowledge is required. Perfect for pet projects, classrooms and building bot MVPs from scratch while having a complete freedom over what your bot can do (ChatFuel is great, but what if you actually want to code?). Probably not the best solution for commercial projects at the momentRubotnik is yet to prove its worth in production.

This is how you greet your users with Rubotnik:

Rubotnik is zero-configuration, you can have a conversation with your bot on Messenger in under 10 minutes (and most of that time you'll spend on Facebook and Facebook for Developers, creating a page and an "app" for the bot).

Rubotnik is built on top of an excellent facebook-messenger gem by Johannes Gorset that does all the heavy-lifting to actually interact with the Messenger Platform API. While facebook-messenger implements a client, rubotnik offers you a way to reason about your bot design without dozens of nested if and case statements. Rubotnik comes with a bare-bones architecture that ensures multiple connected users are served without delays or overlaps.

What the heck is "bot-end"?

Exactly as with modern front-end, "bot-end" is a separate web application that can talk with your back-end through a (REST) API. Project generated with Rubotnik uses Puma as web server, contains its own config.ru and can be deployed to Heroku in a matter of minutes. And you can still use Heroku's free account, as "sleep time" is not a deciding factor in bot interactions.

Rubotnik currently can not be integrated directly inside the Rails project (although thoughts on that are welcome) and does not have a database adapter of its own on purpose, to keep the boilerplate to the very minimum and extract conversational logic to a separate layer.

Rubotnik is perfect to consume existing APIs from a chatbot interface

NB: Rubotnik comes with httparty library to make HTTP requests, but you can use any other tool by including it in the project's Gemfile.

It is recommended to install Heroku CLI, Ngrok and Bundler before you start.

And then create your bot with:

Now you can cd to PROJECT_NAME, open it in your favorite editing and start hacking!

To start playing with your bot directly from Messenger (after you've created an app in Facebook Developer Console):

And in a new Terminal tab:

A project generated with rubotnik new will have a following simple structure:

All the magic happens inside Rubotnik.route :message and Rubotnik.route :postback blocks, this is where you can use Rubotnik's DSL to bind user messages to "commands" that your bot is going to execute.

A "command" is just a plain Ruby method inside the Commands module that has access to message (or postback) and user objects. This is how you match incoming message to a command:

bind can also take a block for a simple response that does not merit its own method:

If none of the commands are matched, a default block will be invoked

Debugging bots under Facebook Messenger Platorfm is not the most pleasant experience if your client can not handle the POST request to your webhook from the API that contains a message relayed from user Facebook will try resending the message again and again, before finally disabling your bot if it still can not return a 200 response. In order to save you from that trouble, Rubotnik sets $DEBUG environment variable to "true" while you're on localhost.

While in this mode, every StandardError exception raised by your bot's code will be forwarded as a bot response to the chat dialogue, ensuring the conversation flow is never broken. As a developer, you will be able to see what is wrong with your bot while talking it. I find it a very natural experience.

Note that Rubotnik does not reload the server on code change. Every time you want to add a new feature or modify an existing oneyou will have to relaunch heroku local after code save.

Currently, Rubotnik has quite a verbose logging to stdout that will help you make sense of what's going on.

Your starting point is bot.rb file that serves your bot, enables its persistent menu and a greeting screen, and provides top-level routing for messages and postbacks.

profile.rb contains constants that provide hash structures (mimicking JSON from Facebook docs) for payloads necessary to enable the "Start Button", "Welcome Screen" and "Persistent Menu" of your bot. Modify them to your liking. Note that it's better not to change them very often after enabling them, as Facebook caches interface elements.

Every connected user will be given it's own User object that is stored in the hash in memory, while your bot is running. You can reference user or @user (both will work) from anywhere inside your code.

user.id will give you an unique identifier for connected user (assigned by Facebook), and user.session is a hash that can be used for storing any user-related data during the session. For instance, you can design a thread of conversation that will ask user for some information, keep bits of that information as different keys under user.session hash and make a POST call with httparty (included in your project) or any other tool to your application back-end to persist the data.

One of the most painful points in bot development is conversation branching. Rubotnik tries to make that a little bit more intuitive by allowing you to chain "command" methods together. Here's an example that you will find in the generated project.

Any message from user that has any combination of words "how", "do" and "you" (e.g. "How are you doing?", "How do you do?") will trigger a response defined under reply_with. text is a text of the response and quick_replies is an optional array of quick replies (maximum 11) that will be attached to your bot's message like this:

Any further user action will now be handled by start_conversation command under Commands module. If the user chooses to ignore "quick replies" hints and just types something in the message box, that will be a regular message.text, if he clicks on one of supplied quick replies, that will result in a received message with two properties: message.text # => "Good!" and message.quick_reply # => "OK". Now you can handle it in start_conversation:

This is the breakdown of the sequence of events:

Rubotnik gives you a number of helper methods (defined here:

UI::FBButtonTemplate takes two arguments: string for the text message and an array of hashes for buttons. See types of buttons available in Messenger Platform docs.

If you have a button of type 'postback', you will be responsible to implementing the trigger for that action under Rubotnik.route :postback as bind 'BUTTON_TEMPLATE_ACTION', to: :do_smth_on_button_click.

Generic template is a way to send the user a carousel of items, each consisting of an image, a title, a description and up to 3 action buttons. Each card can be made clickable and link to a website. Constructing Generic Template involves building a long nested JSON (refer to Facebook docs to see what keys are available) and Rubotnik tries to abstract it at least a little bit. You only need to build hashes for the elements array of the original documentation. Create your structure and save it in a constant:

Then you can create an instance of UI::FBCarousel by passing your template to the constructor. Then you can send it to the user.

Here is the the result: 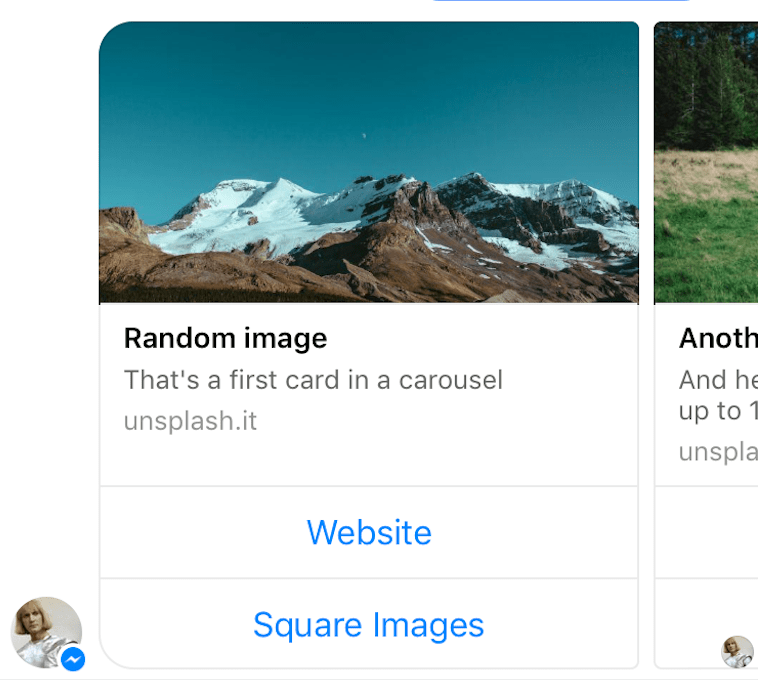 You can send an image to the user. Note that image won't have any text, but you can send a regular message along with it.

The Open Graph template allows you to send a structured message with an Open Graph URL, plus an optional button. Currently, only sharing songs is supported. The song will appear in a bubble that allows the message recipient to see album art and preview the song.

Events other then message and postback are currently not supported.

Once you have designed your bot and tested in on localhost, it's time to send it to the cloud, so it live its life without being tethered to your machine. Assuming you already have a Heroku account and Heroku CLI tools installed, here's pretty much the whole process:

Now don't forget to go back to your Facebook developer console and change the address of your webhook from your ngrok's URL to the Heroku one. That's it!

Im a still a relatively new Ruby developer (I started coding in 2015 while looking for a break from my 10+ years career as a TV reporter) and this is my first attempt at OSS. Any contribution will be more than welcome! Rubotnik is still in the early stage of development, so it's your chance to make a difference!

After checking out the repo, run bin/setup to install dependencies. Then, run rake spec to run the tests (currently project has no tests, but you're welcome to land a helping hand). You can also run bin/console for an interactive prompt that will allow you to experiment.

The gem is available as open source under the terms of the MIT License.