Implementation / replication of DALL-E (paper), OpenAI's Text to Image Transformer, in Pytorch. It will also contain CLIP for ranking the generations.

This library could not have been possible without the contributions of janEbert, Clay, robvanvolt, Romaine, and Alexander! 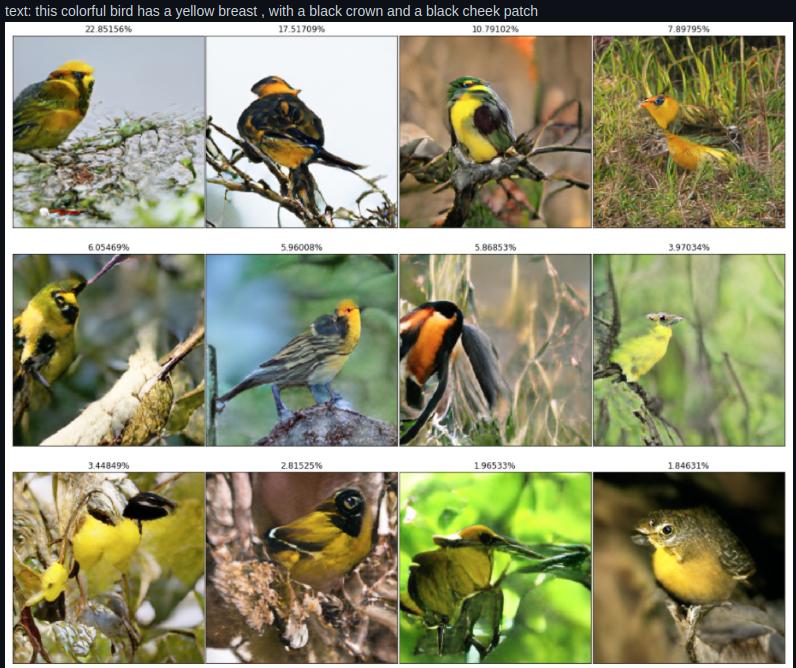 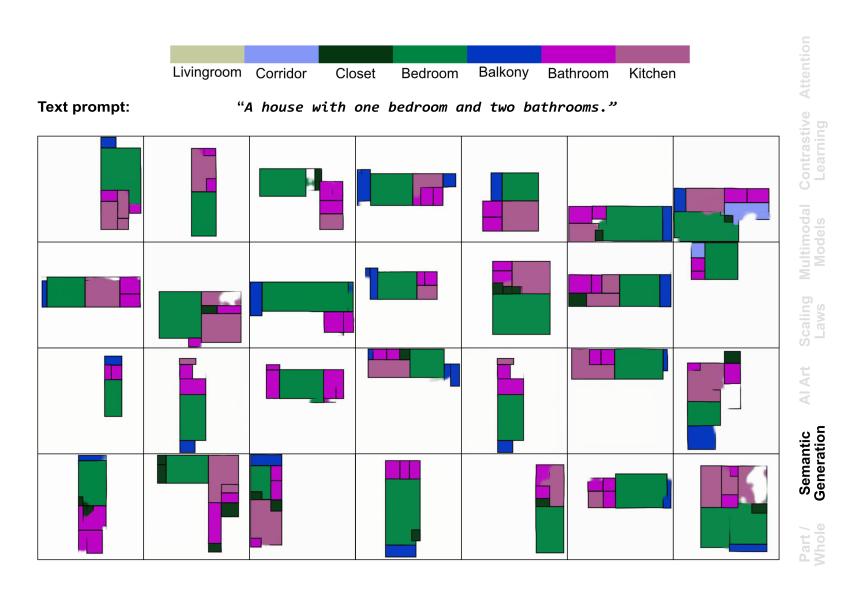 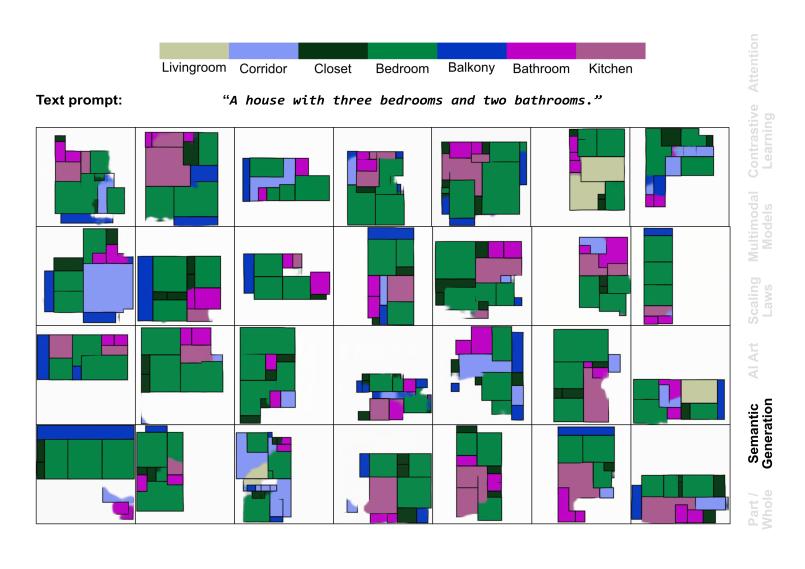 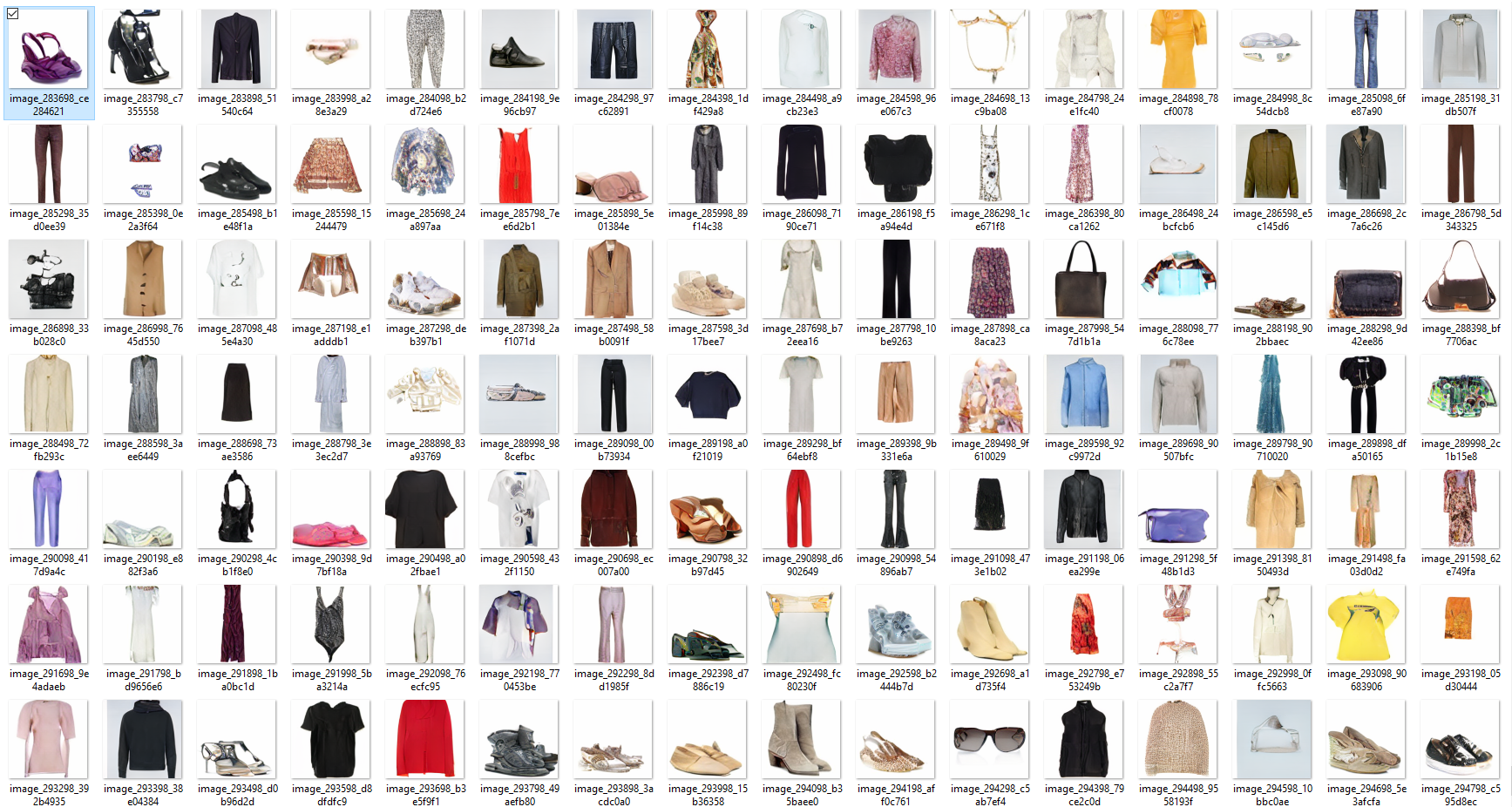 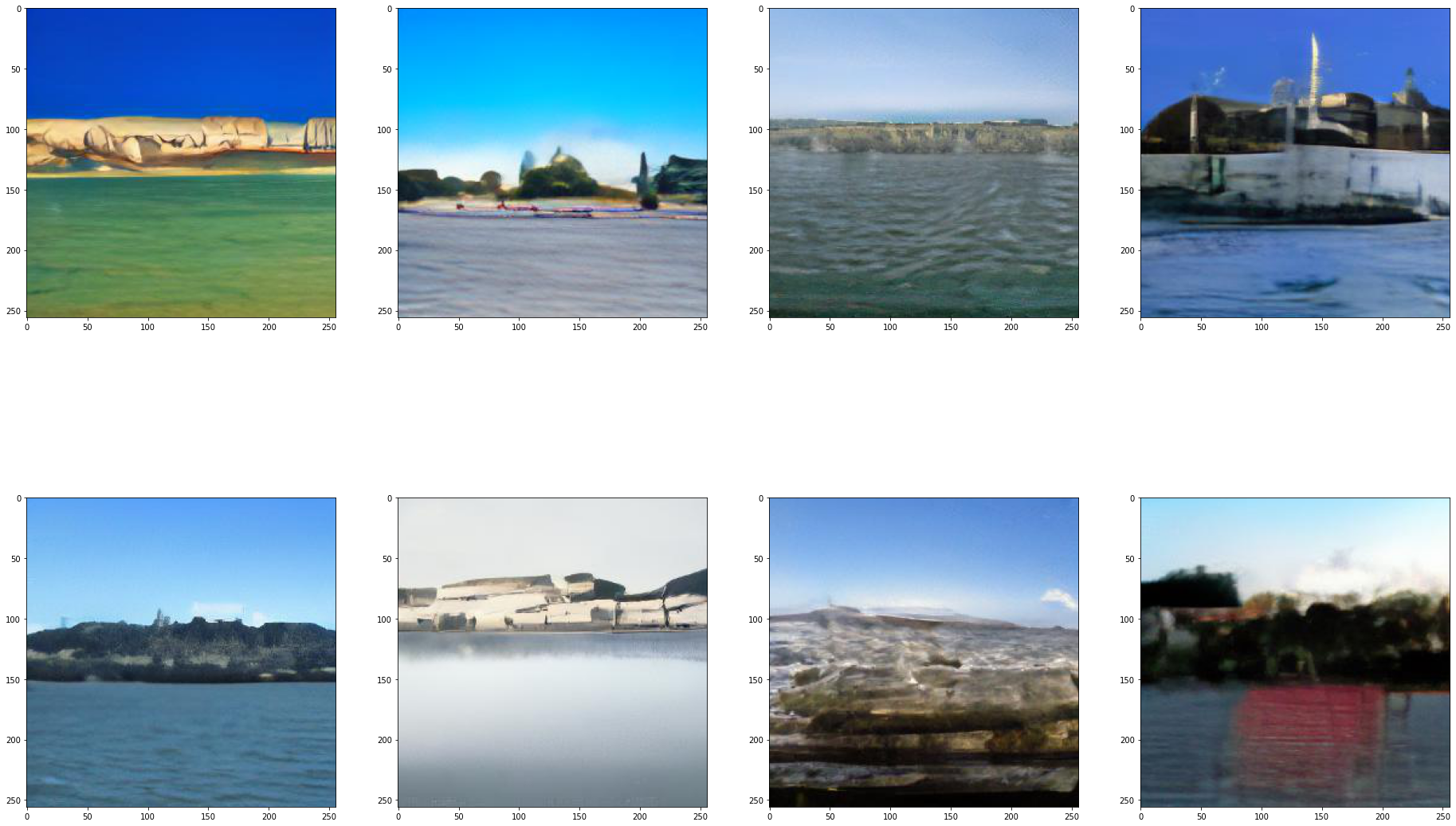 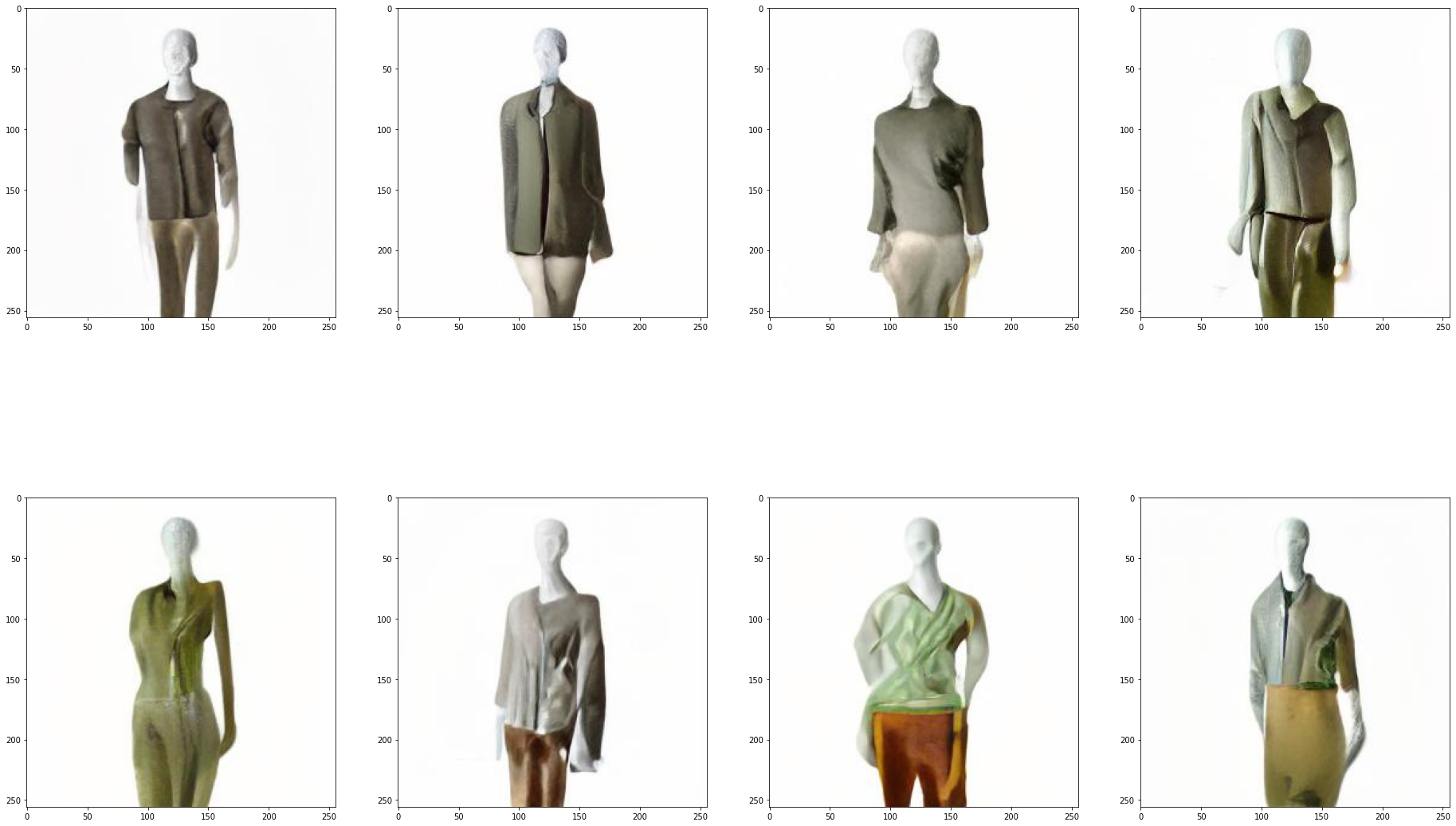 Train DALL-E with pretrained VAE from above

To prime with a starting crop of an image, simply pass two more arguments

You may also want to generate text using DALL-E. For that call this function:

You can also skip the training of the VAE altogether, using the pretrained model released by OpenAI! The wrapper class should take care of downloading and caching the model for you auto-magically.

You can also use the pretrained VAE offered by the authors of Taming Transformers! Currently only the VAE with a codebook size of 1024 is offered, with the hope that it may train a little faster than OpenAI's, which has a size of 8192.

In contrast to OpenAI's VAE, it also has an extra layer of downsampling, so the image sequence length is 256 instead of 1024 (this will lead to a 16 reduction in training costs, when you do the math). Whether it will generalize as well as the original DALL-E is up to the citizen scientists out there to discover.

The default VQGan is the codebook size 1024 one trained on imagenet. If you wish to use a different one, you can use the vqgan_model_path and vqgan_config_path to pass the .ckpt file and the .yaml file. These options can be used both in train-dalle script or as argument of VQGanVAE class. Other pretrained VQGAN can be found in taming transformers readme. If you want to train a custom one you can follow this guide

Recently there has surfaced a new technique for guiding diffusion models without a classifier. The gist of the technique involves randomly dropping out the text condition during training, and at inference time, deriving the rough direction from unconditional to conditional distributions.

Katherine Crowson outlined in a tweet how this could work for autoregressive attention models. I have decided to include her idea in this repository for further exploration. One only has to account for two extra keyword arguments on training (null_cond_prob) and generation (cond_scale).

To get the similarity scores from your trained Clipper, just do

In the blog post, they used 64 layers to achieve their results. I added reversible networks, from the Reformer paper, in order for users to attempt to scale depth at the cost of compute. Reversible networks allow you to scale to any depth at no memory cost, but a little over 2x compute cost (each layer is rerun on the backward pass).

Simply set the reversible keyword to True for the DALLE class

By default DALLE will use full attention for all layers, but you can specify the attention type per layer as follows.

The sparse attention only applies to the image. Text will always receive full attention, as said in the blogpost.

You can also train with Microsoft Deepspeed's Sparse Attention, with any combination of dense and sparse attention that you'd like. However, you will have to endure the installation process.

First, you need to install Deepspeed with Sparse Attention

Next, you need to install the pip package triton. It will need to be a version < 1.0 because that's what Microsoft used.

If both of the above succeeded, now you can train with Sparse Attention!

This section will outline how to train the discrete variational autoencoder as well as the final multi-modal transformer (DALL-E). We are going to use Weights & Biases for all the experiment tracking.

(You can also do everything in this section in a Google Colab, link below)

To train the VAE, you just need to run

If you installed everything correctly, a link to the experiments page should show up in your terminal. You can follow your link there and customize your experiment, like the example layout below. 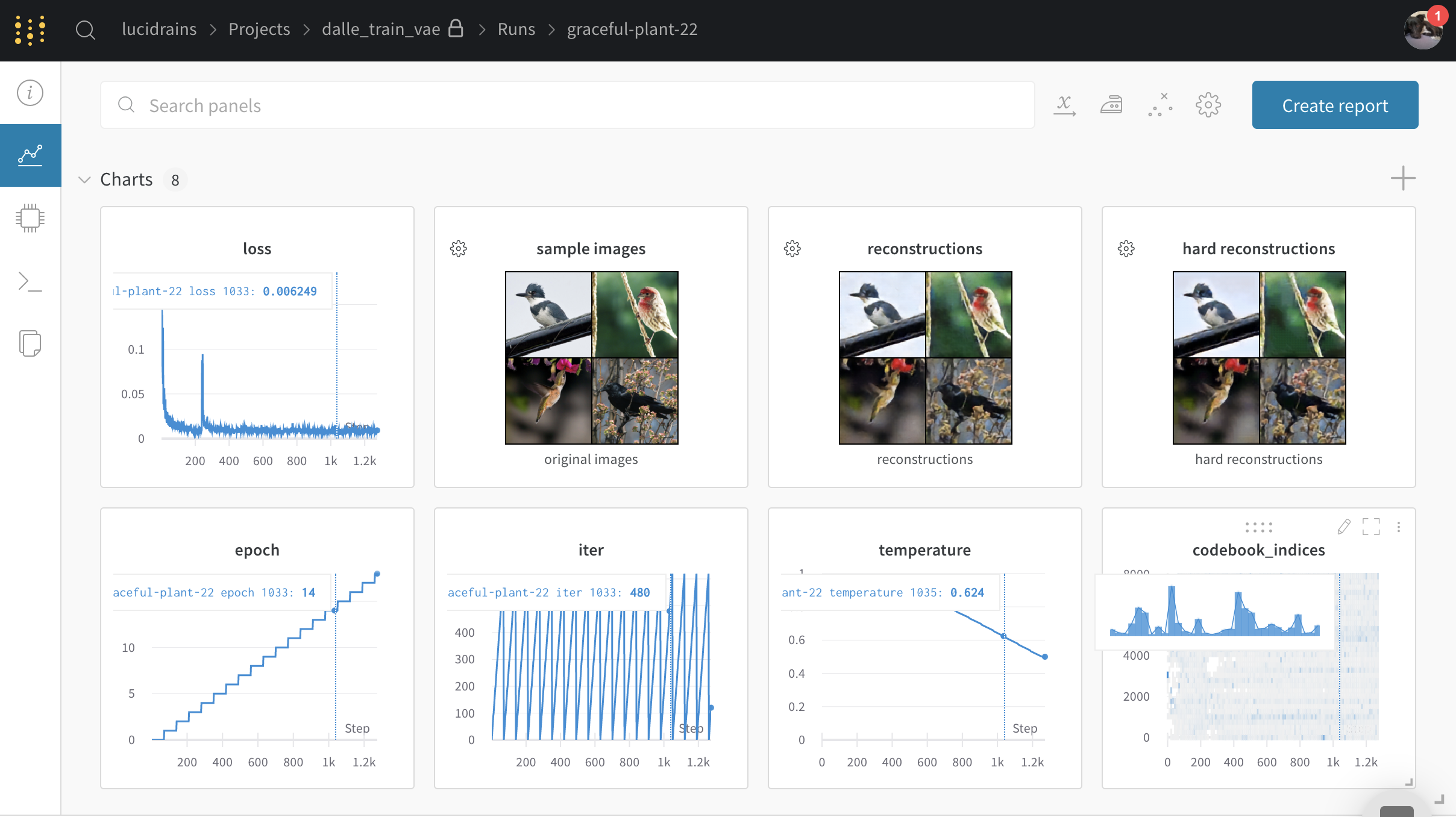 You can of course open up the training script at ./train_vae.py, where you can modify the constants, what is passed to Weights & Biases, or any other tricks you know to make the VAE learn better.

Model will be saved periodically to ./vae.pt

In the experiment tracker, you will have to monitor the hard reconstruction, as we are essentially teaching the network to compress images into discrete visual tokens for use in the transformer as a visual vocabulary.

Weights and Biases will allow you to monitor the temperature annealing, image reconstructions (encoder and decoder working properly), as well as to watch out for codebook collapse (where the network decides to only use a few tokens out of what you provide it).

Once you have trained a decent VAE to your satisfaction, you can move on to the next step with your model weights at ./vae.pt.

Now you just have to invoke the ./train_dalle.py script, indicating which VAE model you would like to use, as well as the path to your folder if images and text.

The dataset I am currently working with contains a folder of images and text files, arbitraily nested in subfolders, where text file name corresponds with the image name, and where each text file contains multiple descriptions, delimited by newlines. The script will find and pair all the image and text files with the same names, and randomly select one of the textual descriptions during batch creation.

If you have a dataset with its own directory structure for tying together image and text descriptions, do let me know in the issues, and I'll see if I can accommodate it in the script.

You likely will not finish DALL-E training as quickly as you did your Discrete VAE. To resume from where you left off, just run the same script, but with the path to your DALL-E checkpoints.

If you have containing shards (dataset split into several .tar(.gz) files), this is also supported:

You can stream the data from a http server or gloogle cloud storage like this:

In order to convert your image-text-folder to WebDataset format, you can make use of one of several methods. (https://www.youtube.com/watch?v=v_PacO-3OGQ here are given 4 examples, or a little helper script which also supports splitting your dataset into shards of .tar.gz files https://github.com/robvanvolt/DALLE-datasets/blob/main/wds_create_shards.py)

You can now also train DALL-E without having to train the Discrete VAE at all, courtesy to their open-sourcing their model. You simply have to invoke the train_dalle.py script without specifying the --vae_path

Just use the --taming flag. Highly recommended you use this VAE over the OpenAI one!

Once you have successfully trained DALL-E, you can then use the saved model for generation!

To generate multiple images, just pass in your text with '|' character as a separator.

Note that DALL-E is a full image+text language model. As a consequence you can also generate text using a dalle model.

This will complete the provided text, save it in a caption.txt and generate the corresponding images.

You can use a docker container to make sure the version of Pytorch and Cuda are correct for training DALL-E. Docker and Docker Container Runtime should be installed.

To run in an interactive shell:

Thanks to janEbert, the repository is now equipped so you can train DALL-E with Microsoft's Deepspeed!

You can simply replace any $ python <file>.py [args...] command with

to use the aforementioned DeepSpeed library for distributed training, speeding up your experiments.

Modify the deepspeed_config dictionary in train_dalle.py or train_vae.py according to the DeepSpeed settings you'd like to use for each one. See the DeepSpeed configuration docs for more information.

As of DeepSpeed version 0.3.16, ZeRO optimizations can be used with single-precision floating point numbers. If you are using an older version, you'll have to pass the --fp16 flag to be able to enable ZeRO optimizations.

Automatic mixed precision is a stable alternative to fp16 which still provides a decent speedup. In order to run with Apex AMP (through DeepSpeed), you will need to install DeepSpeed using either the Dockerfile or the bash script.

Then you will need to install apex from source. This may take awhile and you may see some compilation warnings which can be ignored.

Now, run train_dalle.py with deepspeed instead of python as done here:

After installing Horovod, replace any $ python <file>.py [args...] command with

to use the Horovod library for distributed training, speeding up your experiments. This will multiply your effective batch size per training step by <num-gpus>, so you may need to rescale the learning rate accordingly.

This repository supports custom tokenization with YouTokenToMe, if you wish to use it instead of the default simple tokenizer. Simply pass in an extra --bpe_path when invoking train_dalle.py and generate.py, with the path to your BPE model file.

To create a BPE model file from scratch, firstly

Then you need to prepare a big text file that is a representative sample of the type of text you want to encode. You can then invoke the youtokentome command-line tools. You'll also need to specify the vocab size you wish to use, in addition to the corpus of text.

That's it! The BPE model file is now saved to ./path/to/bpe.model and you can begin training!

Those who do not want to imitate anything, produce nothing. - Dali

Jukebox ⭐ 4,560
Code for the paper "Jukebox: A Generative Model for Music"
most recent commit 10 months ago
Dalle Pytorch ⭐ 4,370
Implementation / replication of DALL-E, OpenAI's Text to Image Transformer, in Pytorch
total releases 172most recent commit a month ago