Scout is a small fuzzy finder for your terminal built in Rust.

It is heavily inspired by other tools like selecta and the omnipresent fzf.

The main features of scout are:

This tool uses the system's pseudo terminal located in /dev/tty to print the UI and capture inputs, which means it only works on UNIX systems (like Linux or macOS) as far as I know.

Each release, since version v1.0.0 (not included), has a package with scout compiled for different architectures. You can try to donwload and install the package that match your architecture.

You can find the releases in their GitHub page.

Scout is in the main crates repository, so you can install it with cargo:

Install via homebrew (macOS only)

You can use my custom tap repository to install scout with homebrew:

Since scout is a Rust project, you will need to have Rust installed in your system. Check rustup to see how to install Rust. To build scout you will need Rust v1.43 or higher.

Clone the repository and run cargo install from it:

You can also run cargo build --release if you just want to play with it. The binary file will be in the ./target/release/scout path.

The main idea behind scout, or any other fuzzy finder, is to filter a list of items (for example a list of paths to files) and then do something with the selection. For that you run a command, pipe its output to scout and then pipe scout's output to another command.

For example, you can try to find a file and cat its contents:

scout has a set of options that allows you to control how it looks. It also supports a set of control sequences and keys to navigate the UI.

You can see these options in the main help of the program with the --help flag:

You can configure scout's UI with a config file. By default the program will try to find this file in the path $HOME/.config/scout.toml, but you can pass a custom path with the --config option.

This is how scout looks like without any defined style: 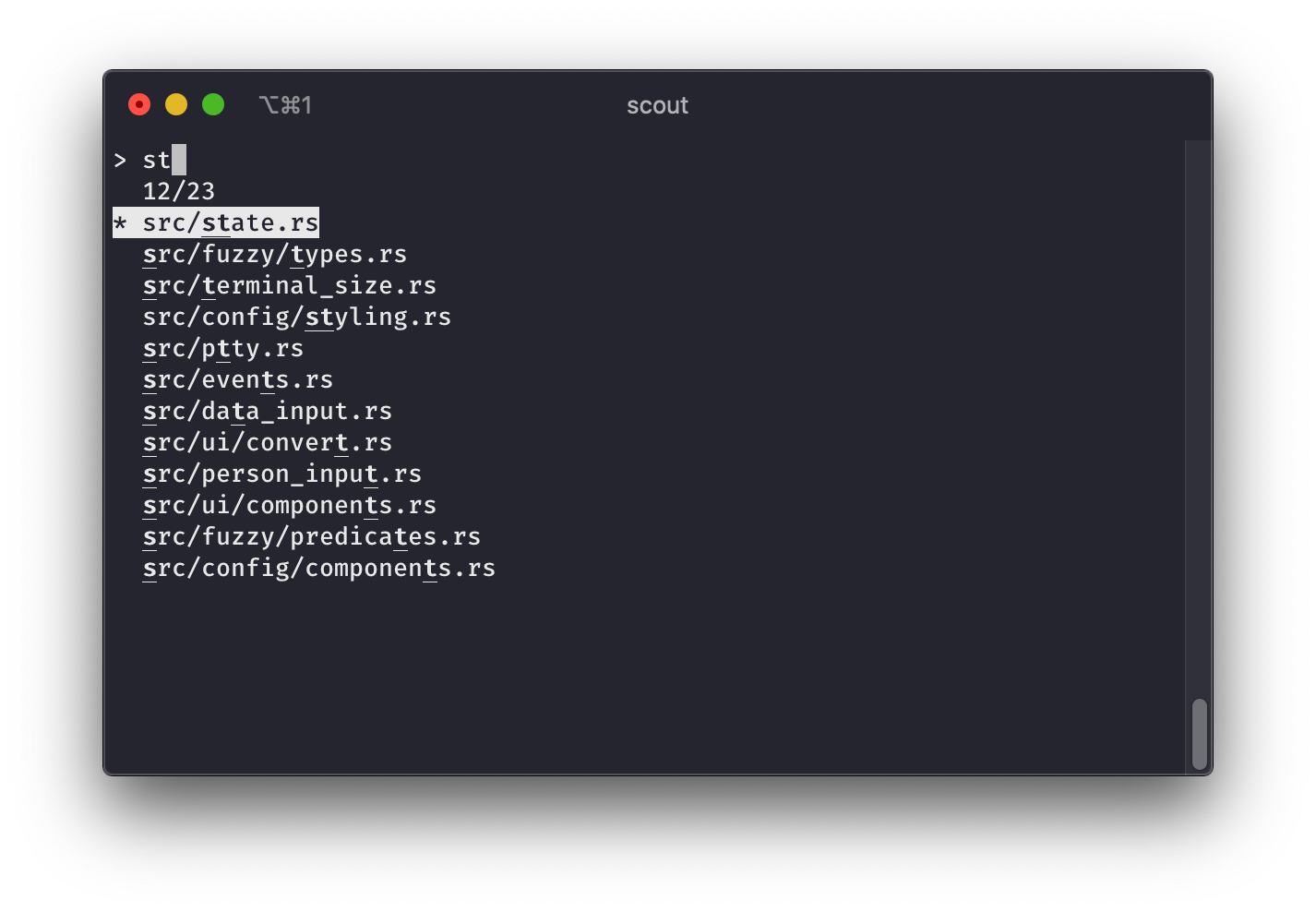 This is an example of a configuration file with all the possible settings:

That configuration placed in the $HOME/.config/scout.toml would generate this UI: 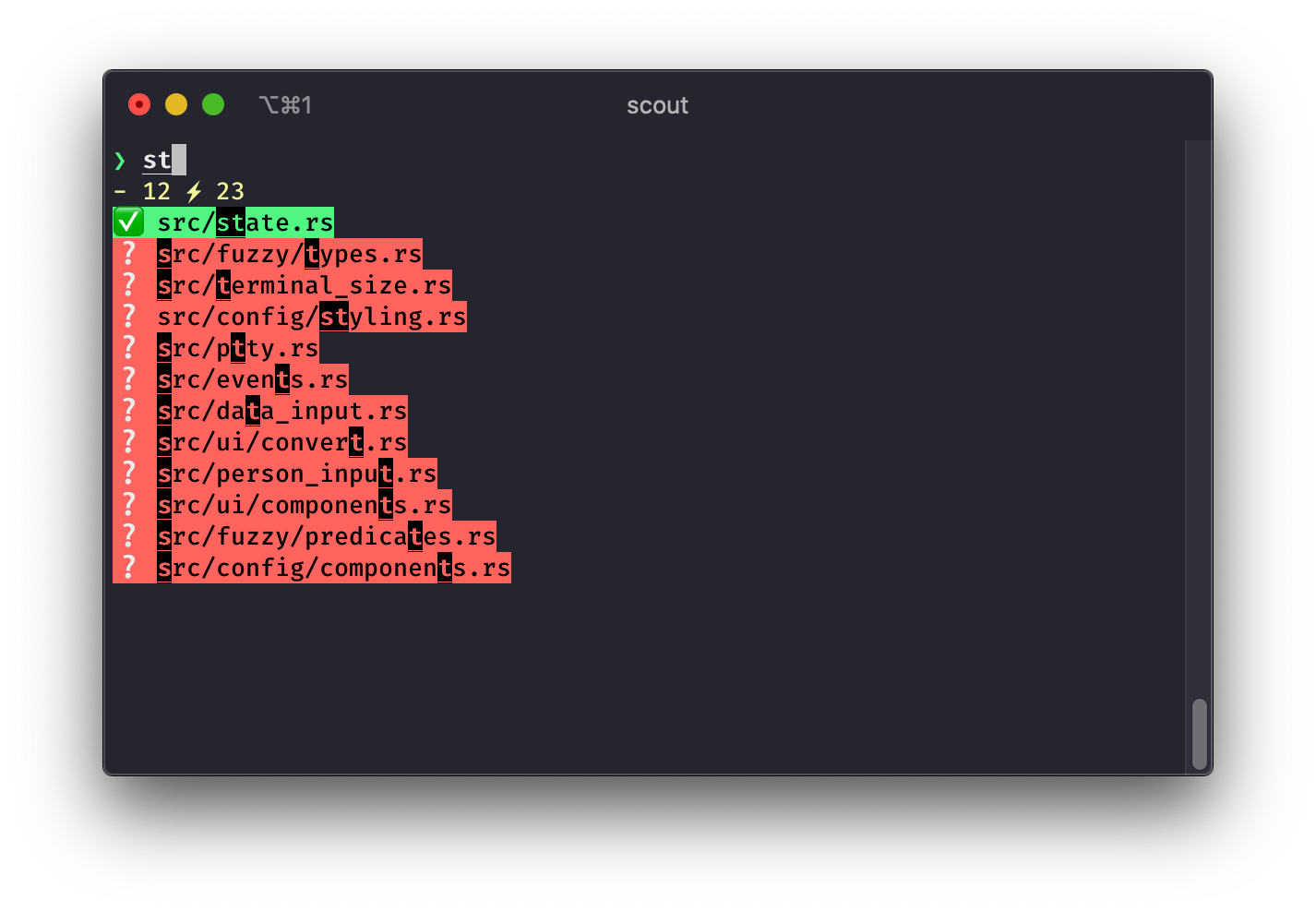 It is not the prettiest, but it is just an example of what you can do.

A style is defined with a string of space separated values. I based the syntax on starship.rs configuration system.

These are the possible values you can use to define a style:

For color setting it really depends on your terminal color capabilities. Most modern terminals allow you to set any color, though.

You can learn more about the fuzzy matching algorithm in the README in the repository page of the fuzzaldrin-plug package. The only missing part from that algorithm is the path scoring bonus.

From all the algorithms for fuzzy matching out there this is one of the most complete I found, so I decided to try to port it.

One of the main reasons I've built this was to have a general purpose fuzzy finder I could use inside Neovim. If you want to do the same you can use my scout.vim plugin.

Is this better than X?

I don't know. Maybe? It really depends on your needs. I built this tool first to learn some Rust and second because I didn't like much other more heavy tools. That doesn't mean is better or worse. It is probably simpler. Give scout a try, see if it works for you, and if not try any other tool, it's cool.

Is this faster than X?

I don't know, I haven't run any benchmark, to be honest. It is fast enough for me and most probably for most of the people.

Is this any good?