My personal Home Assistant Container configurations with 300+ automations. These are my active automations and configurations that I use every day. Updated frequently as I add more devices and come up with more and more complicated ways to do simple tasks.

Many of my automations rely on some form of lighting but many examples can be found in lights.yaml and location.yaml.

Lights are grouped via light_group.yaml

I utilize a number of automations that adjust climate controls. Mostly they can be found in climate.yaml. Ecobee room sensors are heavily used in occupancy.yaml and as conditions in many automations

Switches and outlets are used in various capacities, some are for lighting and some are for fans type devices. lights.yaml and occupancy.yaml should have some good examples.

Washing machine is automated around the Wemo Insight Plug. This outlet can monitor power consumption, I created a sensor based on the power reading that shows a simple status of running or not running thus automating around that sensor.

Locks are used mostly as a way to lock / unlock doors based on locations, see location.yaml and locks.yaml for some examples

Door sensors, motion sensors, and the alarm siren are used in many different ways via alarm.yaml. I've also implemented some of the alarm functions as part of water_sensors.yaml.

I go for native Echo integration wherever possible, but a few devices are not currently supported where I've had to implement some work arounds via Home Assistant Cloud (previously Emulated Hue). Most of these are just exposed via an input_boolean and customize.yaml. This allows the ability to have echo turn on or off an input_boolean in turn triggering an automation.

Harmony Hubs work via a combination of input_selects, scripts, and automations in media.yaml.

Water sensors serve one major function, to alert me to the presence of water. Almost all of those automations can be fond via water_works.yaml

Smoke detectors, like the water sensors, have one real function to alert me of smoke or CO2. Almost all of those automations can be fond via smoke_alarm.yaml

Nothing is currently automated around cameras, just a UI element. The Ring doorbell is used in a number of ways to trigger an action based on motion detection or someone ringing the doorbell. Examples can be found in doorbell.yaml

I also send camera feeds as a payload on a few iOS notifications, those can mostly be found in notification_text.yaml

Similar to locks, the Garage door is mostly automated to open / close based on location and after a set amount of time. Examples can be found in location.yaml and garage.yaml

All Roomba related automations can be found in roomba.yaml

All Blinds related automations can be found in blinds.yaml

All laundry related automations can be found in laundry.yaml

The iOS app is used for some notifications within various automations. The native iOS app is the main method of doing any location based automations via location.yaml and many of the conditions I use are based on presence detection of household members. 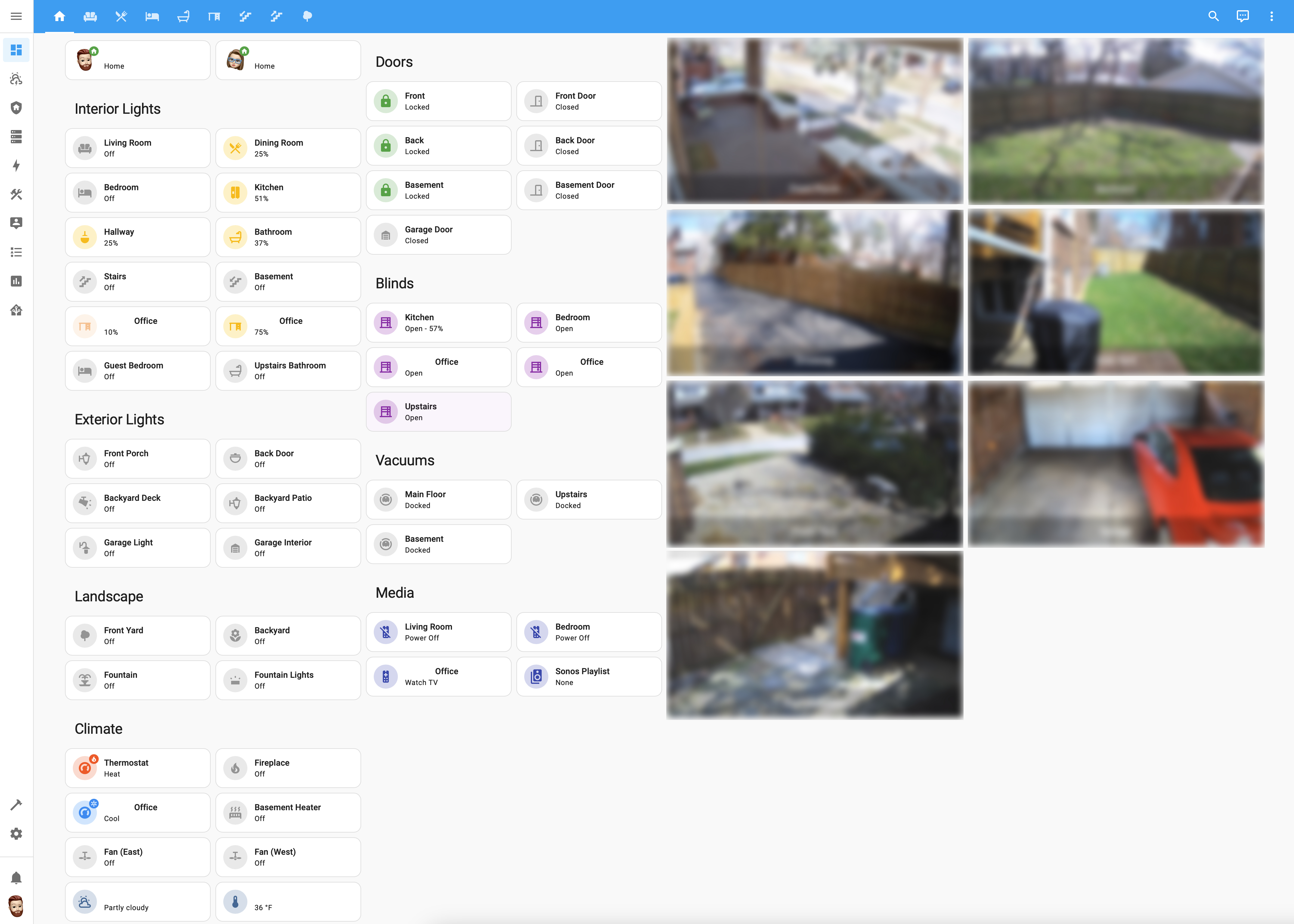 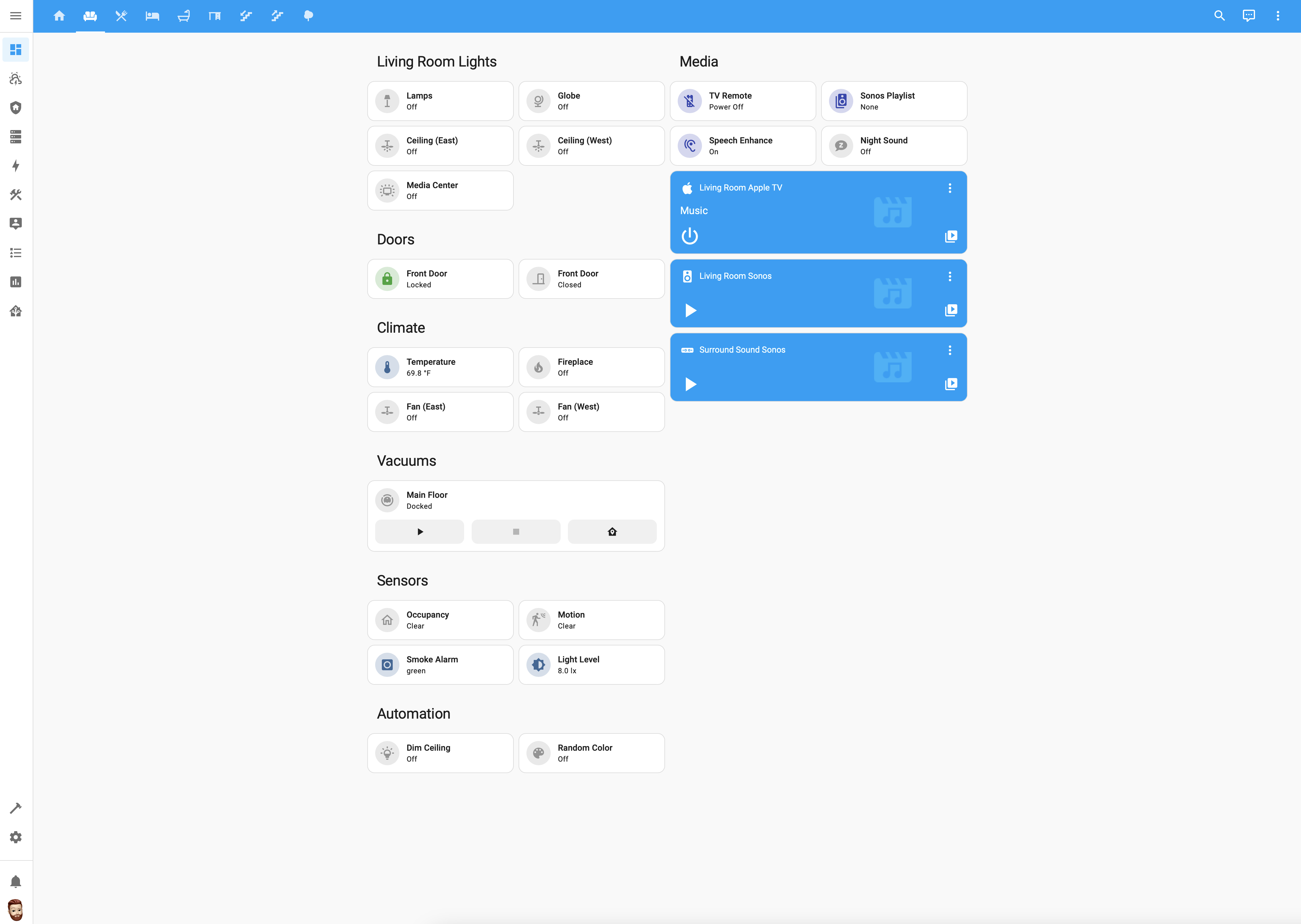 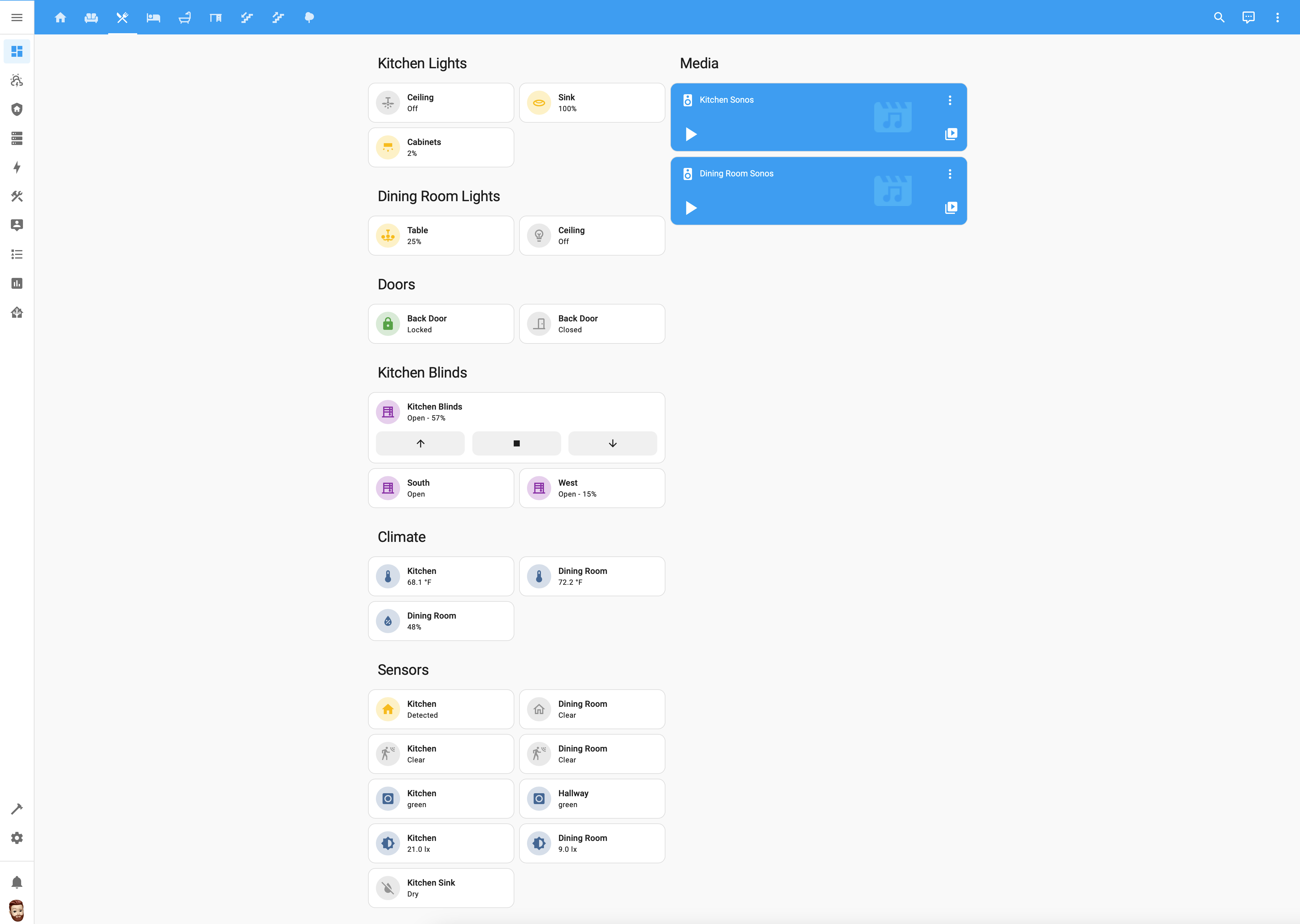 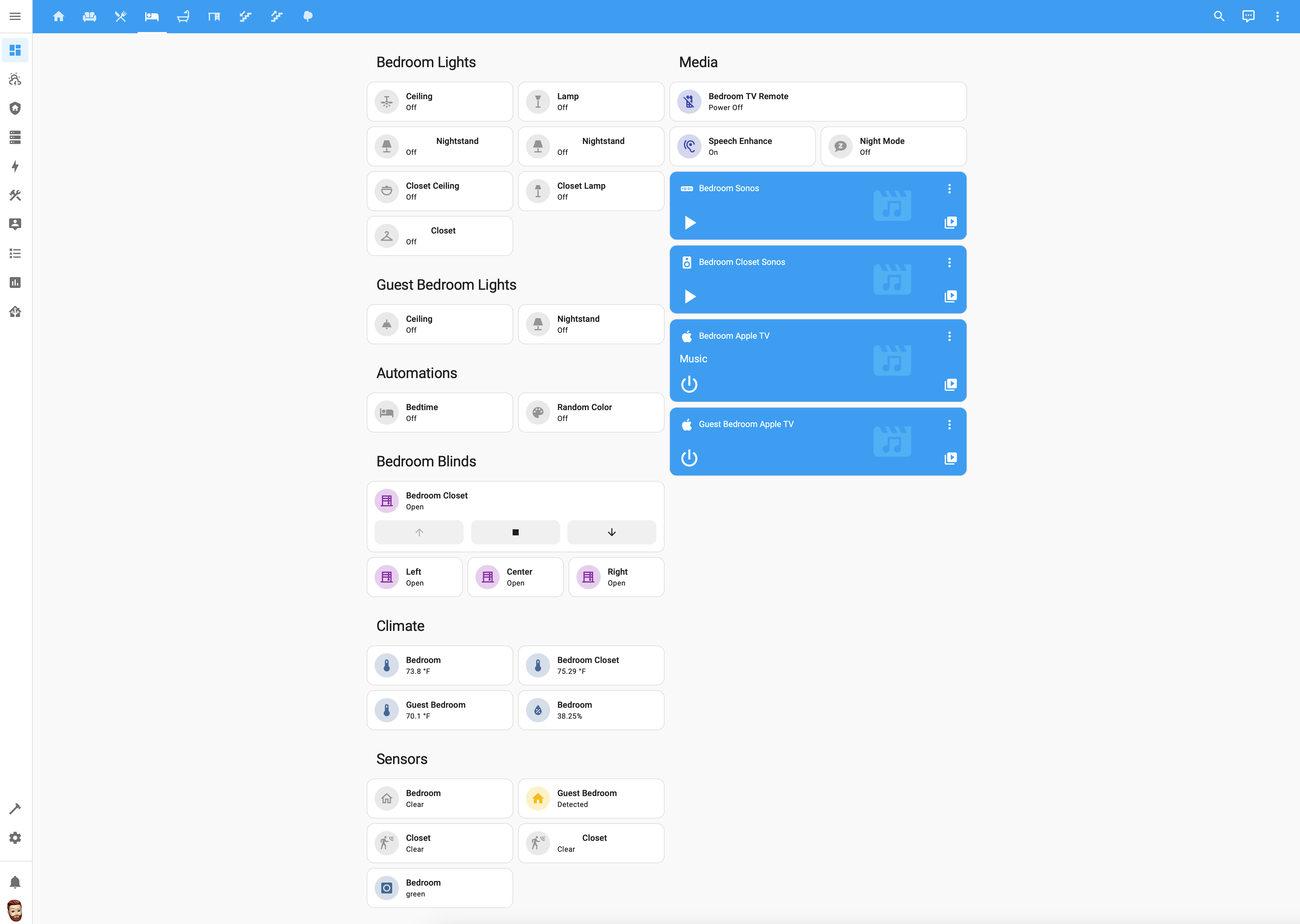 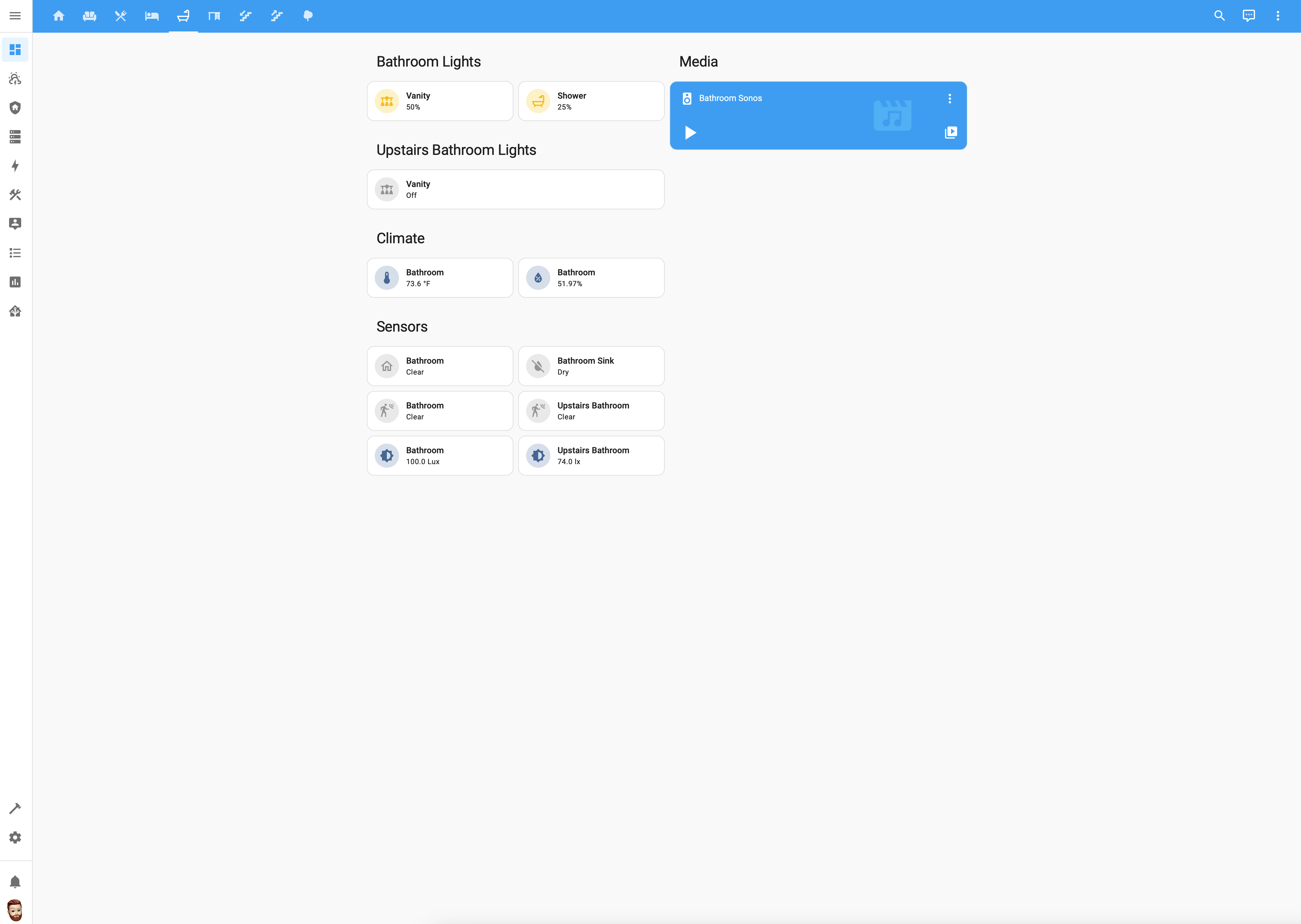 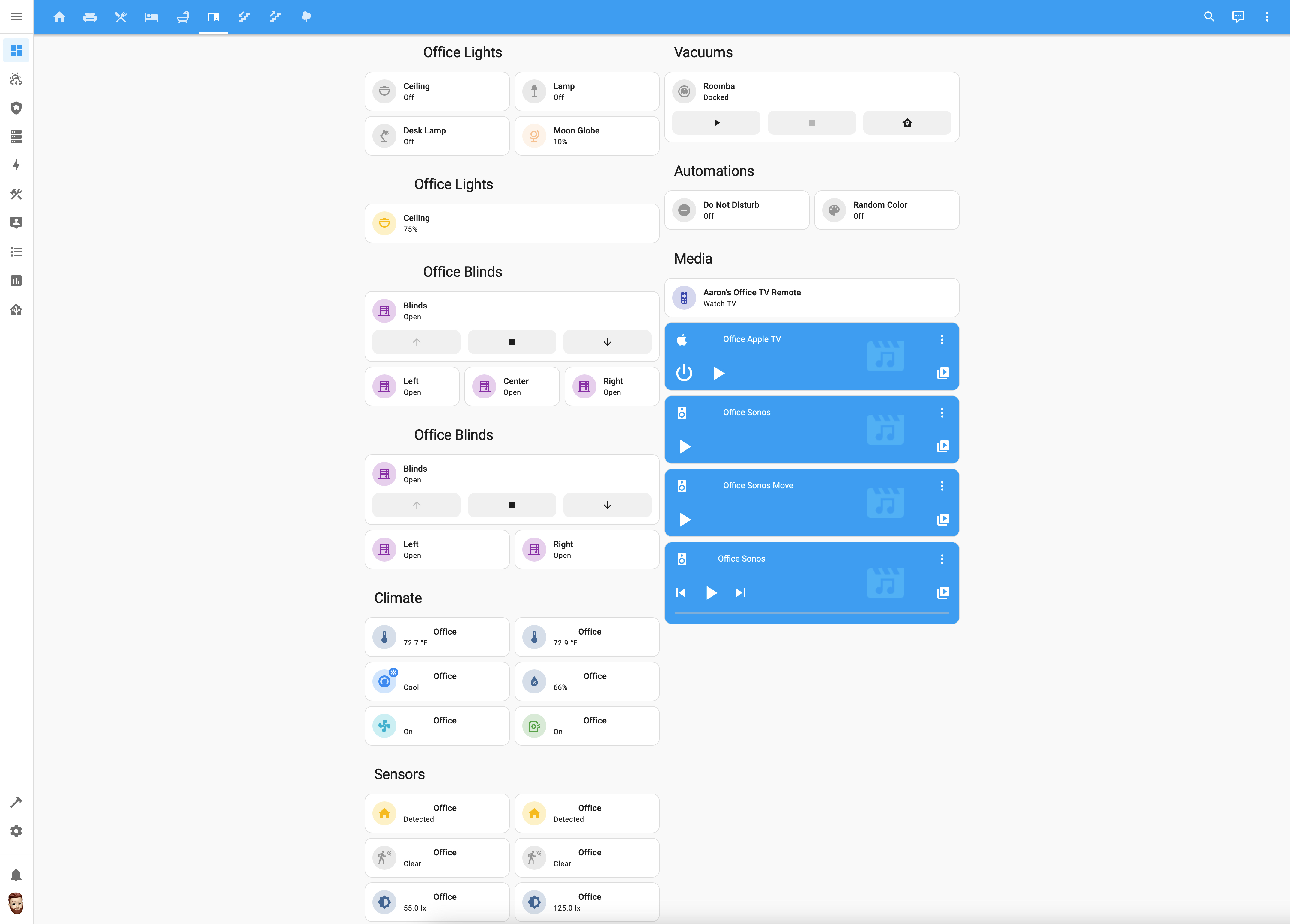 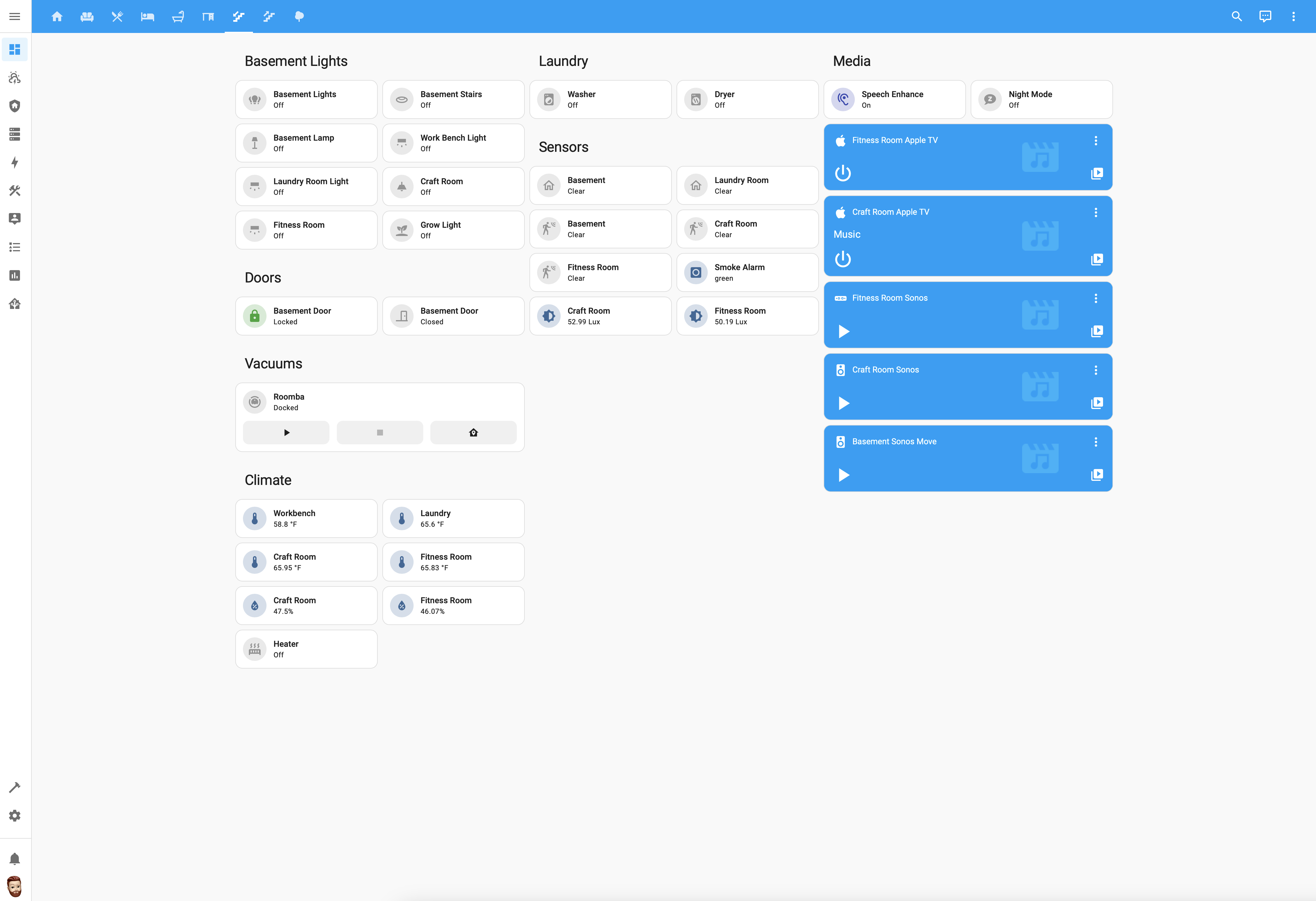 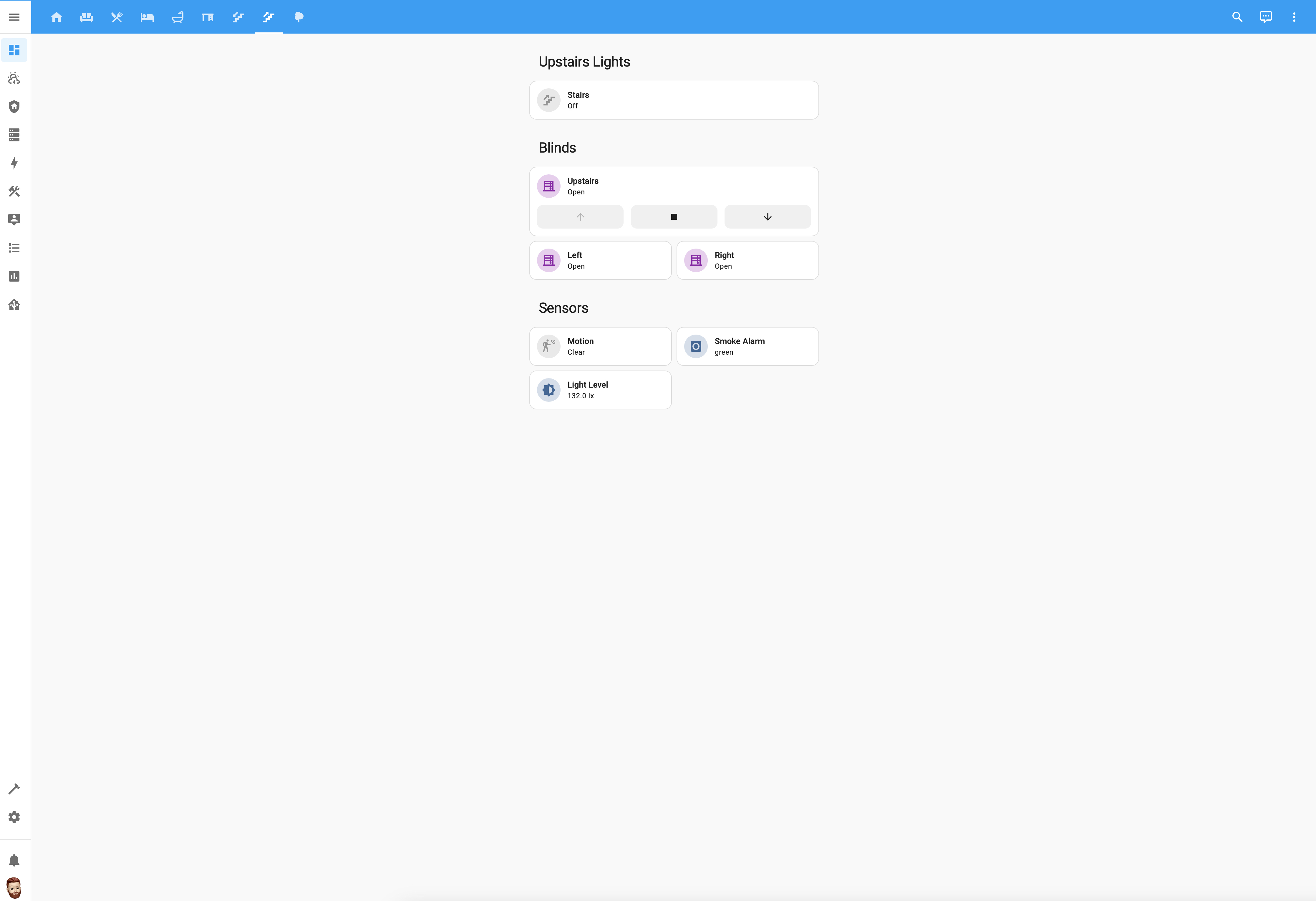 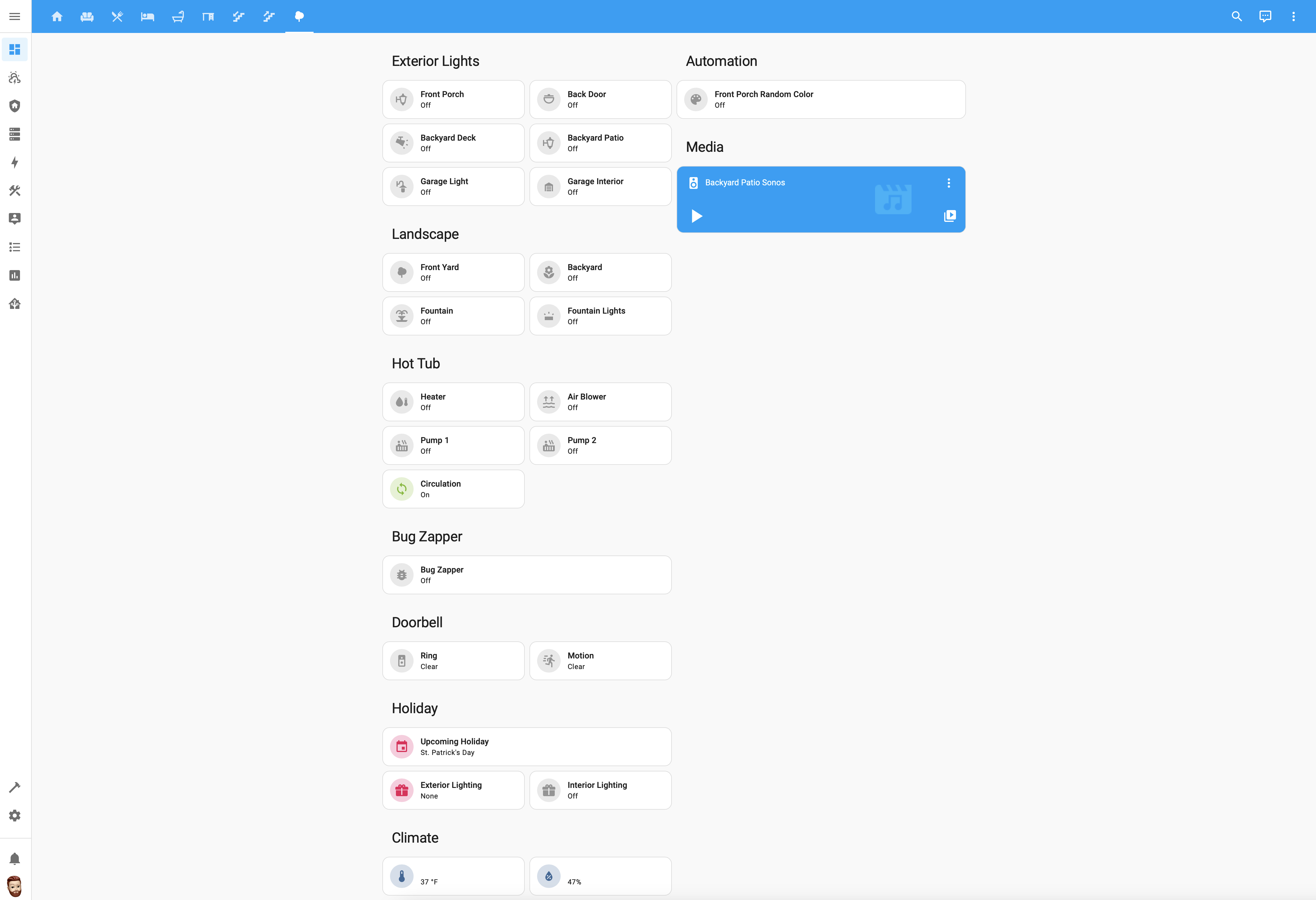 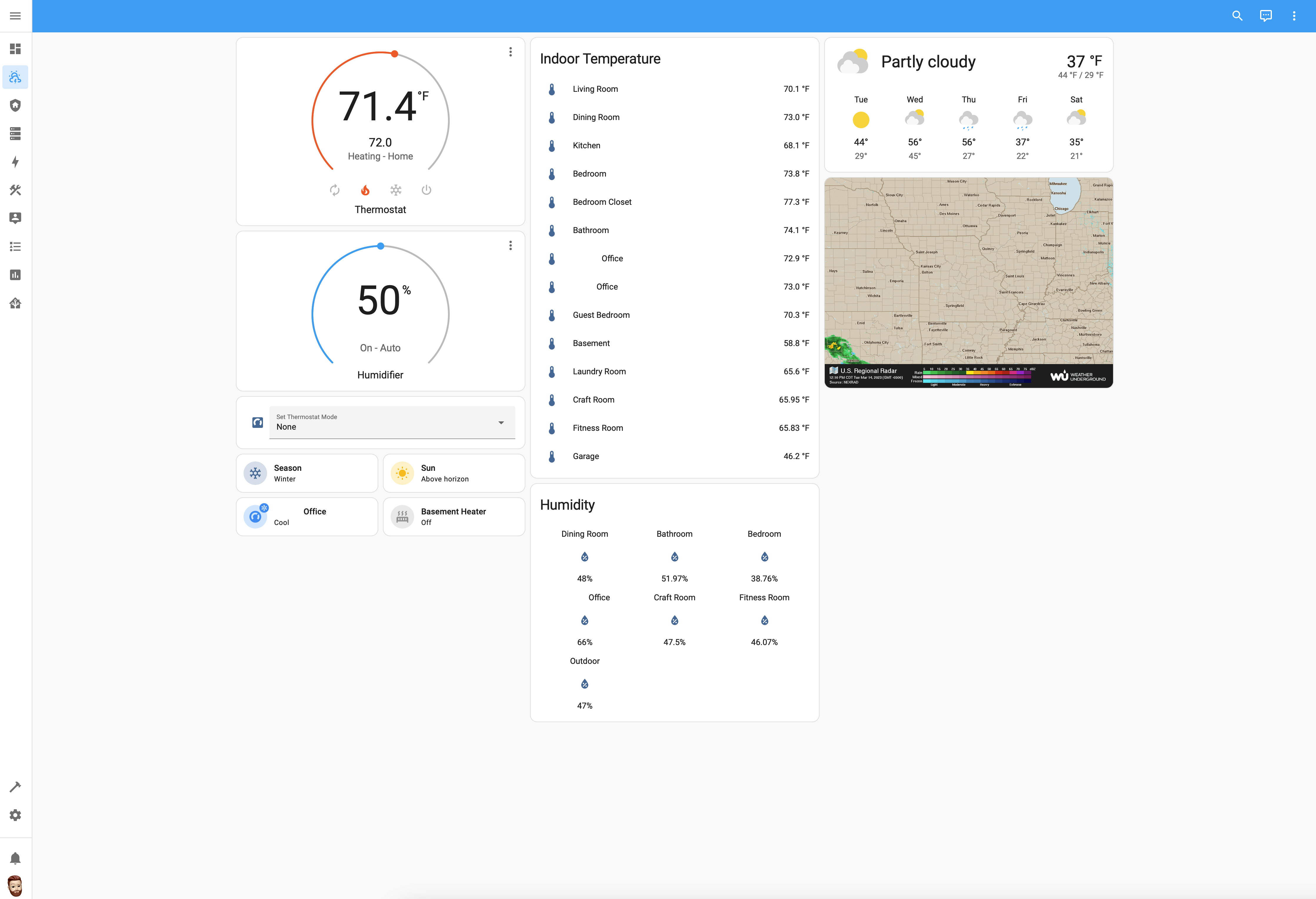 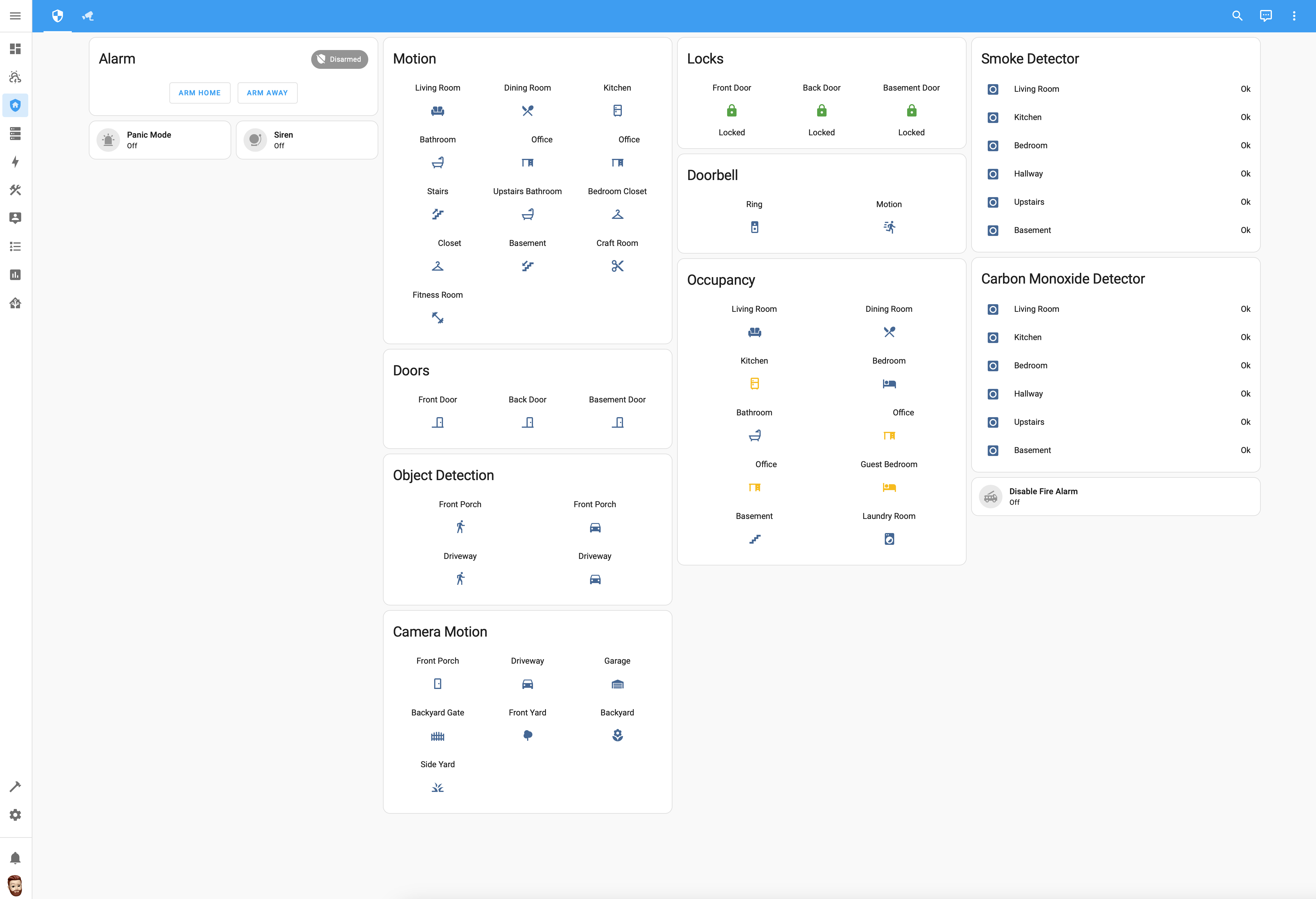 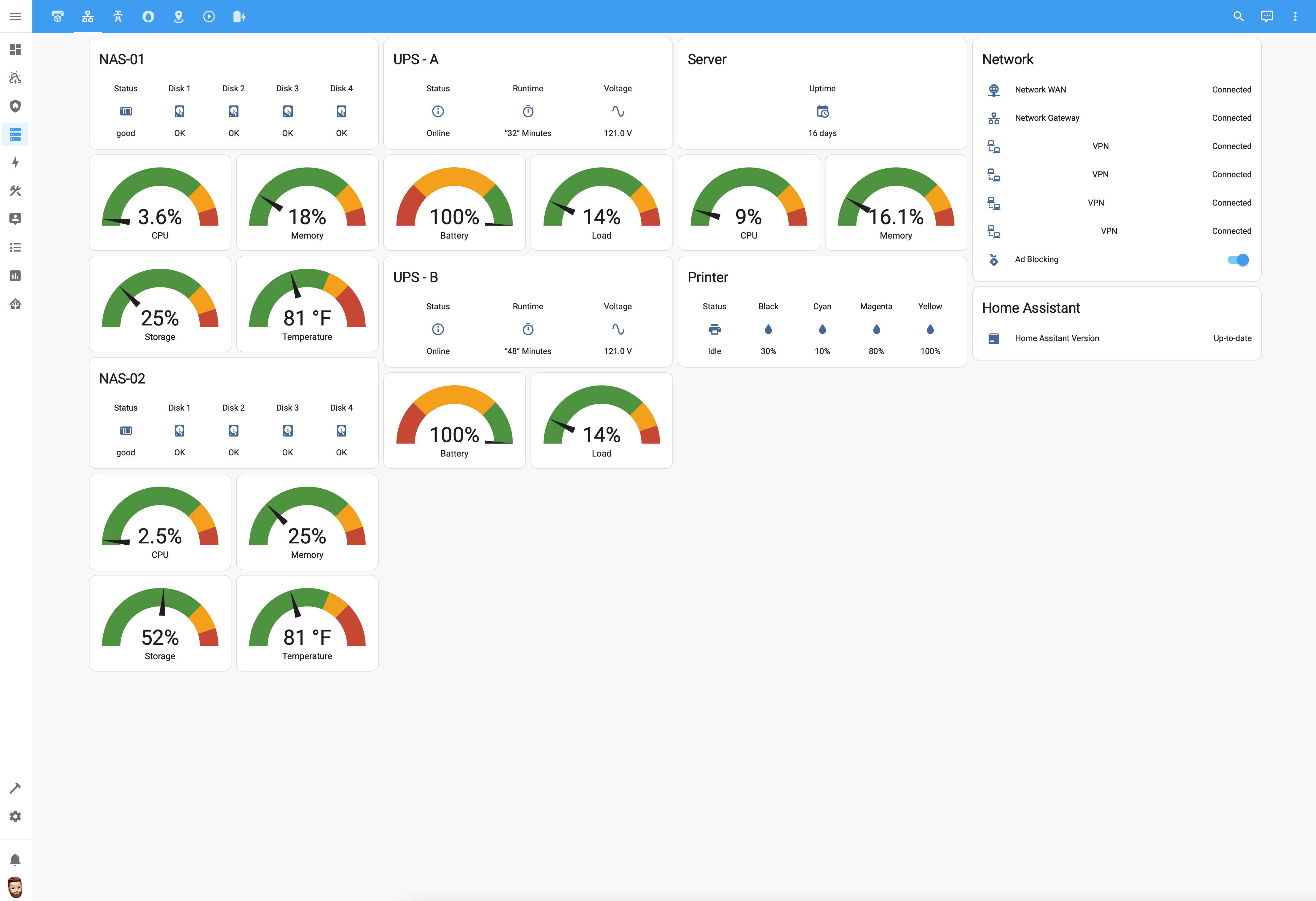