Flare is a single-player 2D action RPG with fast-paced action and a dark fantasy style.

It is built on the FLARE engine (Free/Libre Action Roleplaying Engine). Its repo is at https://awesomeopensource.com/project/flareteam/flare-engine

For best results, please use the latest version of the FLARE engine with the game data in this repository. Using an older version of the engine could result in some game elements not working correctly. 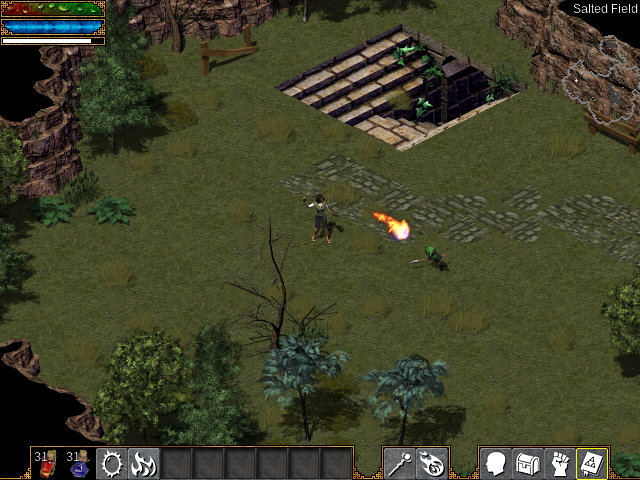 The Flare Engine is released under GPL version 3 or later.

All of Flare's art and data files are released under CC-BY-SA 3.0. Later versions are permitted.

The Marck Script font is licensed under the SIL Open Font License, Version 1.1.

If you are building and running Flare Game from source, this is the simplest way to get started on all operating systems. Here you build and play Flare in a local folder instead of installing it to a standard OS folder (e.g. /usr/local or Program Files).

See the Flare-Engine repo for instructions on how to build/install Flare:

The mods folder should be in the same directory as the flare executable when building from source.

Flare Game is installed as a set of mods for Flare Engine. Place the contents of the "mods" folder inside Flare Engine's mods folder.

Then enable these mods in Flare's Configuration screen.

Building and Running on Linux

From this point we have two options:

Option 2 Run the game without installing:

Settings are stored in one of these places:

Here you can enable fullscreen, change the game resolution, enable mouse-move, and change keybindings. The settings files are created the first time you run Flare.

Save files are stored in one of these places:

If permissions are correct, the game is automatically saved when you exit.

If you are packaging Flare Game for release (e.g. on an operating system's software repo), we suggest creating two packages.

When distributing flare-game you may elect to omit these folders which are not used at runtime.