This is a TensorFlow implementation of DeepMind's Differentiable Neural Computer (DNC) architecture introduced in their recent Nature paper:

This implementation doesn't include all the tasks that was described in the paper, but it's focused on exploring and re-producing the general task-independent key characteristics of the architecture. However, the implementation was designed with extensibility in mind, so it's fairly simple to adapt it to further tasks.

Copy experiments and tests ran on a machine with:

This experiment is designed to demonstrate the various functionalities of the external memory access mechanisms such as in-order retrieval and allocation/deallocation.

A similar approach to that of the paper was followed by training a 2-layer feedforward model with only 10 memory locations on a copy task in which a series of 4 random binary sequences each of which is of size 6 (24 piece of information) was presented as input. Details about the training can be found here.

The model was able to learn to copy the input successfully, and it indeed learned to use the mentioned memory mechanisms. The following figure (which resembles Extended Data Figure 1 in the paper) illustrates that.

You can re-generate similar figures in the visualization notebook 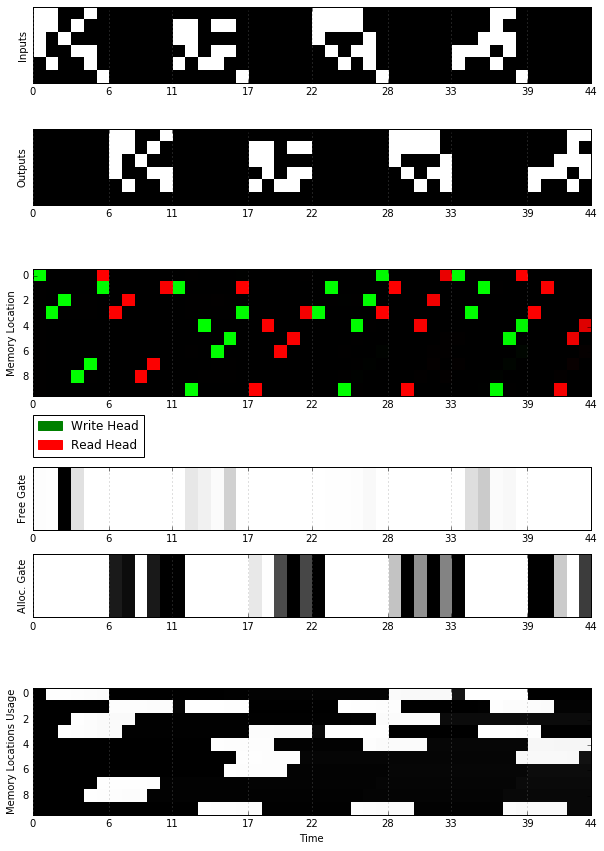 The figure differs a little from the one in the paper when it comes to the activation degrees of the gates. This could be due to the small size of the model and the relatively small training time. However, this doesn't affect the operation of the model.

This experiment was designed to check:

To approach that, a 2-layer feedforward model with 15 memory locations was trained on a copy problem in which a single sequence of random binary vectors of lengths between 1 and 10 was presented as input. Details of the training process can be found here.

The model was then tested on pairs of increasing sequence lengths and increasing memory sizes with re-training on any of these pairs of parameters, and the fraction of correctly copied sequences out of a batch of 100 was recorded. The model was indeed able to generalize and use the available memory locations effectively without retraining. This is depicted in the following figure which resembles Extended Data Figure 2 from the paper.

Similar figures can be re-generated in the visualization notebook 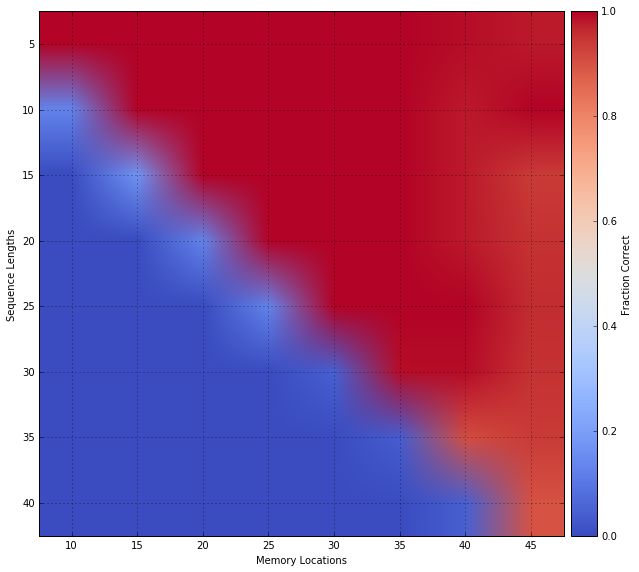 This experiment was designed to reproduce the paper's results on the bAbI 20QA task. By training a model with the same parameters as DNC1 described in the paper (Extended Data Table 2) on the en-10k dataset, the model resulted in error percentages that mostly fell within the 1 standard deviation of the means reported in the paper (Extended Data Table 1). The results, and their comparison to the paper's mean results, are shown in the following table. Details about training and reproduction can be found here.

If you're interested in using the implementation for new tasks, you should first start by reading the structure and basic usage guide to get comfortable with how the project is structured and how it can be extended to new tasks.

You might also find the implementation notes helpful to clarify how some of the math is implemented.