Easy3D is an open-source library for 3D modeling, geometry processing, and rendering. It is implemented in C++ and designed with an emphasis on simplicity and efficiency. Easy3D is intended for research and educational purposes, but it is also a good starting point for developing sophisticated 3D applications.

Compared to existing geometry processing libraries (such as PMP and libigl) that focus on the algorithm aspect, Easy3D also provides a wider range of functionalities for user interactions and rendering. 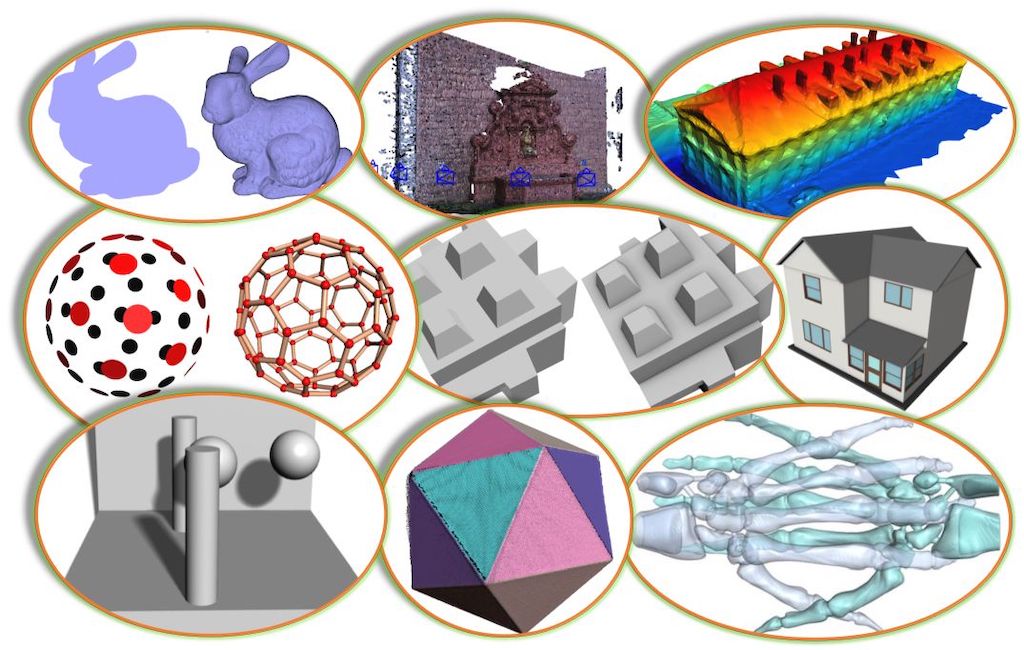 Any type of 3D drawables (e.g., points, lines, triangles, and thus point clouds, mesh surfaces, scalar fields, and vector fields) can be rendered by writing a few lines of code with Easy3D. For example, the following code renders a point cloud as a set of spheres

By abstracting geometric elements as one of the above drawables, more general visualization (e.g., vector fields, scalar fields) can be done very conveniently.

The repository contains a CMakeLists.txt file (in the root directory of the repository) that serves as an anchor for configuring and building programs, as well as a set of subfolders:

Like most software, Easy3D depends on some third-party libraries. Easy3D has made this easier for users by including the source code of most third-party libraries (for the core functionalities and the basic viewer), and it leaves very few optional (for a few additional features that are typically not needed by most users).

The optional third-party libraries are:

There are many options to build Easy3D. Choose one of the following (not an exhaustive list):

Don't have any experience with C/C++ programming? Have a look at How to build Easy3D step by step.

To build and run the test suite, download the entire source, use the CMakeLists.txt in the root directory of the repository, switch on the CMake option Easy3D_BUILD_TESTS (which is disabled by default), and run CMake. After CMake, you can build ALL or only the tests target. Finally, run the tests executable (i.e., YOUR_BUILD_DIRECTORY/bin/tests) for the test.

Use Easy3D in your project

This is quite easy, like many other open-source libraries :-) After you have built Easy3D, you only need to point Easy3D_DIR to your build (or the installation) directory of Easy3D when doing cmake. Then the requested Easy3D libraries, including directories and relevant compile definitions of Easy3D, are visible and accessible to your project. Below is an example of using the default Easy3D viewer. The CMakeLists.txt looks like:

and the main.cpp with minimum code:

The documentation for Easy3D is available here.

Easy3D is free software; you can redistribute it and/or modify it under the terms of the GNU General Public License as published by the Free Software Foundation; either version 3 of the License or (at your option) any later version. The full text of the license can be found in the accompanying 'License' file.

The implementation of Easy3D greatly benefited from and was inspired by existing great open-source libraries, such as PMP, libQGLViewer, Surface mesh, and Graphite. In particular, the implementation of several surface mesh algorithms was taken (with modifications) from PMP, i.e., simplification, subdivision, smoothing, parameterization, remeshing, hole filling, geodesic distances, fairing, curvatures, and triangulation. We would like to thank the original authors of these projects for their permissive license terms. We also thank the users and contributors for reporting/fixing bugs, testing, and providing valuable feedback and suggestions.

If you use Easy3D in scientific work, I kindly ask you to cite it:

Should you have any questions, comments, or suggestions, please contact me at [email protected]