This repository contains code to instantiate and deploy an image resolution enhancer. This model is able to upscale a pixelated image by a factor of 4, while generating photo-realistic details.

The GAN is based on this GitHub repository and on this research article.

The model was trained on 600,000 images of the OpenImages V4 dataset, and the model files are hosted on IBM Cloud Object Storage. The code in this repository deploys the model as a web service in a Docker container. This repository was developed as part of the IBM Developer Model Asset Exchange and the public API is powered by IBM Cloud.

The performance of this implementation was evaluated on three datasets: Set5, Set14, and BSD100. The PSNR (peak signal to noise ratio) and SSIM (structural similarity index) metrics were evaluated, although the paper discusses the MOS (mean opinion score) as the most favorable metric. In essence, the SRGAN implementation trades a better PSNR or SSIM score for a result more appealing to the human eye. This leads to a collection of output images with more crisp and realistic details.

This will pull a pre-built image from the Quay.io container registry (or use an existing image if already cached locally) and run it. If you'd rather checkout and build the model locally you can follow the run locally steps below.

You can deploy the model-serving microservice on Red Hat OpenShift by following the instructions for the OpenShift web console or the OpenShift Container Platform CLI in this tutorial, specifying quay.io/codait/max-image-resolution-enhancer as the image name.

You can also deploy the model on Kubernetes using the latest docker image on Quay.

On your Kubernetes cluster, run the following commands:

The model will be available internally at port 5000, but can also be accessed externally through the NodePort.

A more elaborate tutorial on how to deploy this MAX model to production on IBM Cloud can be found here.

Clone this repository locally. In a terminal, run the following command:

Change directory into the repository base folder:

All required model assets will be downloaded during the build process. Note that currently this docker image is CPU only (we will add support for GPU images later).

The API server automatically generates an interactive Swagger documentation page. Go to http://localhost:5000 to load it. From there you can explore the API and also create test requests.

Use the model/predict endpoint to load a test image (you can use one of the test images from the samples/test_examples/low_resolution folder) in order to get a high resolution output image returned.

The ideal input image is a PNG file with a resolution between 100x100 and 500x500, preferably without any post-capture processing and flashy colors. The model is able to generate details from a pixelated image (low DPI), but is not able to correct a 'blurred' image. 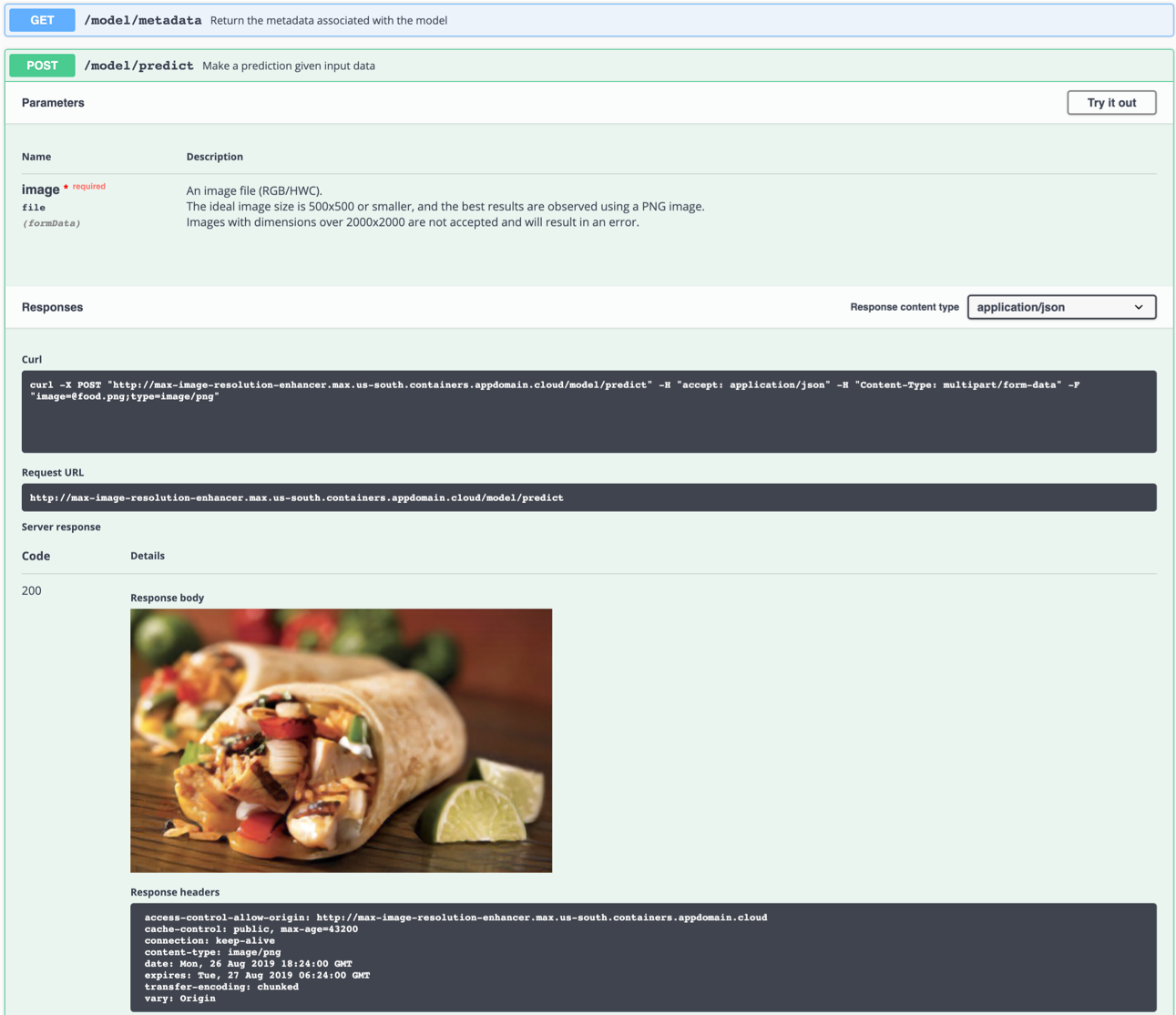 You can also test it on the command line, for example:

The above command will send the low resolution food.png file to the model, and save the high resolution output image to the food_high_res.png file in the root directory.

To run the Flask API app in debug mode, edit config.py to set DEBUG = True under the application settings. You will then need to rebuild the docker image (see step 1).

Please remember to set DEBUG = False when running the model in production.

To stop the Docker container, type CTRL + C in your terminal.

This is likely caused due to the default limitation of Docker's memory allocation to 2 GB. Navigate to the Preferences menu under the Docker Desktop application. Use the slider to increase the available memory to 8 GB and restart Docker Desktop.

This model generates details basically 'out of thin air'. Creating something out of nothing is not possible without making assumptions. The network attempts to recognize elements in the low-resolution image from which it can infer what the reality (human eye | super-resolution) could have looked like. If a group of pixels strongly resembles an observation that is not related to the content of the image, it might lead to observing results that are not 'physically possible'.

For example: a white pixel in a low-resolution image might have been converted to a snowflake, although the original picture might have been taken in the desert. This example is imaginary and has not actually been observed.

Observing artefacts in some images is unfortunately inevitable as any neural network is subject to technical limitations and characteristics of the training data.

Keep in mind that the best results are achieved with the following:

If you are interested in contributing to the Model Asset Exchange project or have any queries, please follow the instructions here.