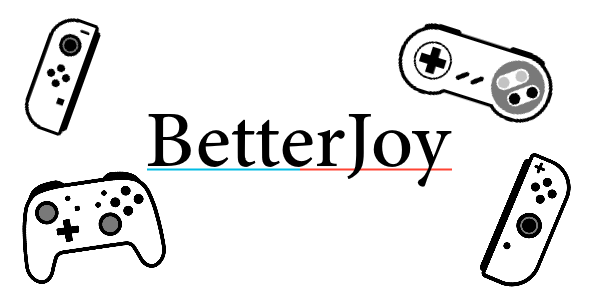 It also allows using the gyro to control your mouse and remap the special buttons (SL, SR, Capture) to key bindings of your choice.

If anyone would like to donate (for whatever reason), you can do so here.

Thank you for using my software and all the constructive feedback I've been getting about it. I started writing this project a while back and have since then learnt a lot more about programming and software development in general. I don't have too much time to work on this project, but I will try to fix bugs when and if they arise. Thank you for your patience in that regard too!

It's been quite a wild ride, with nearly 590k (!!) official download on GitHub and probably many more through the nightlies. I think this project was responsible for both software jobs I landed so far, so I am quite proud of it. 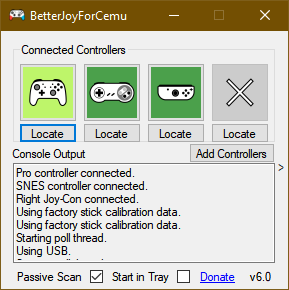 Go to the Releases tab!

Check out the wiki! There, you'll find all sorts of goodness such as the changelog, description of app settings, the FAQ and Problems page, and info on how to make BetterJoy work with Steam better.

Connecting and Disconnecting the Controller

The built binaries are located under

where PLATFORM and CONFIGURATION are the one provided at build time.

A massive thanks goes out to rajkosto for putting up with 17 emails and replying very quickly to my silly queries. The UDP server is also mostly taken from his ScpToolkit repo.

Also I am very grateful to mfosse for pointing me in the right direction and to Looking-Glass without whom I would not be able to figure anything out. (being honest here - the joycon code is his)

Many thanks to nefarius for his ViGEm project! Apologies and appreciation go out to epigramx, creator of WiimoteHook, for giving me the driver idea and for letting me keep using his installation batch script even though I took it without permission. Thanks go out to MTCKC for inspiration and batch files.

A last thanks goes out to dekuNukem for his documentation, especially on the SPI calibration data and the IMU sensor notes!

Massive thank you to all code contributors!