syntect is a syntax highlighting library for Rust that uses Sublime Text syntax definitions. It aims to be a good solution for any Rust project that needs syntax highlighting, including deep integration with text editors written in Rust. It's used in production by at least two companies, and by many open source projects.

If you are writing a text editor (or something else needing highlighting) in Rust and this library doesn't fit your needs, I consider that a bug and you should file an issue or email me. I consider this project mostly complete, I still maintain it and review PRs, but it's not under heavy development.

syntect is available on crates.io. You can install it by adding this line to your Cargo.toml:

After that take a look at the documentation and the examples.

If you've cloned this repository, be sure to run

to fetch all the required dependencies for running the tests.

There's currently an example program called syncat that prints one of the source files using hard-coded themes and syntaxes using 24-bit terminal escape sequences supported by many newer terminals. These screenshots don't look as good as they could for two reasons: first the sRGB colours aren't corrected properly, and second the Rust syntax definition uses some fancy labels that these themes don't have highlighting for. 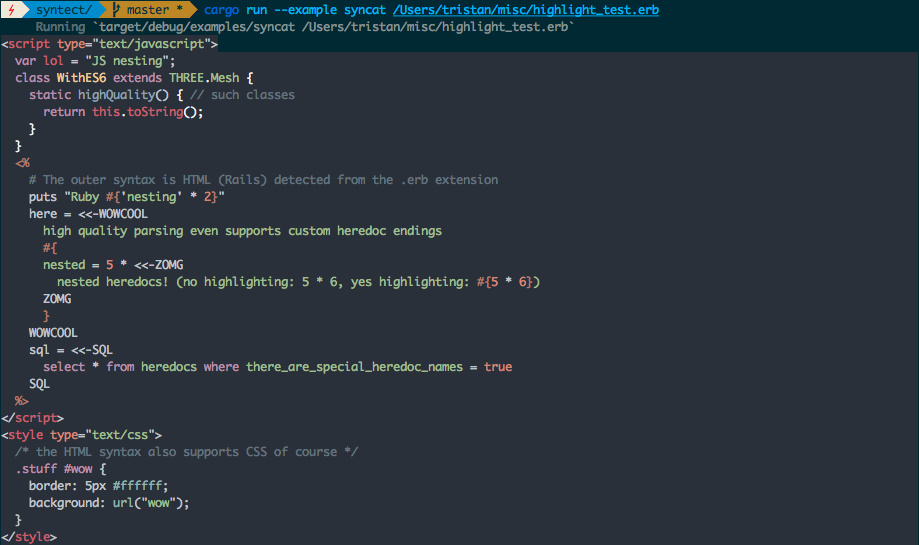 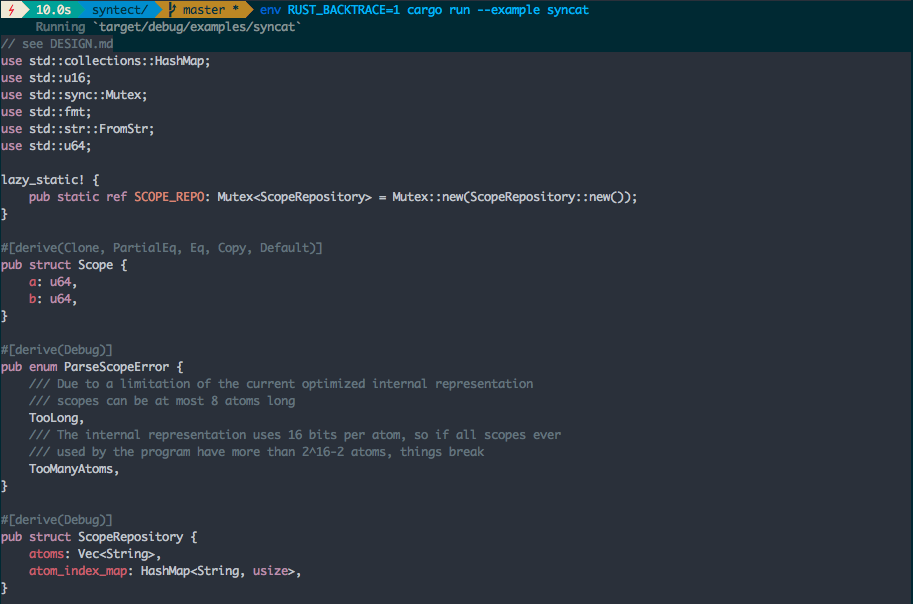 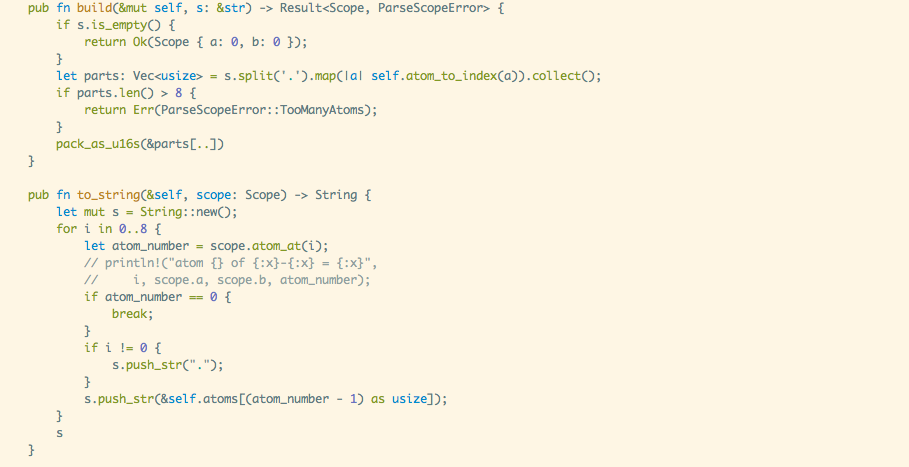 Prints highlighted lines of a string to the terminal. See the easy and html module docs for more basic use case examples.

Currently syntect is one of the faster syntax highlighting engines, but not the fastest. The following perf features are done:

The current perf numbers are below. These numbers may get better if more of the things above are implemented, but they're better than many other text editors. All measurements were taken on a mid 2012 15" retina Macbook Pro, my new 2019 Macbook takes about 70% of these times.

Syntect makes heavy use of cargo features, to support users who require only a subset of functionality. In particular, it is possible to use the highlighting component of syntect without the parser (for instance when hand-rolling a higher performance parser for a particular language), by adding default-features = false to the syntect entry in your Cargo.toml.

For more information on available features, see the features section in Cargo.toml.

Since 4.0 syntect offers an alternative pure-rust regex engine based on the fancy-regex engine which extends the awesome regex crate with support for fancier regex features that Sublime syntaxes need like lookaheads.

The advantage of fancy-regex is that it does not require the onig crate which requires building and linking the Oniguruma C library. Many users experience difficulty building the onig crate, especially on Windows and Webassembly.

As far as our tests can tell this new engine is just as correct, but it hasn't been tested as extensively in production. It also currently seems to be about half the speed of the default Oniguruma engine, although further testing and optimization (perhaps by you!) may eventually see it surpass Oniguruma's speed and become the default.

To use the fancy-regex engine with syntect, add it to your Cargo.toml like so:

If you want to run examples with the fancy-regex engine you can use a command line like the following:

Due to the way Cargo features work, if any crate you depend on depends on syntect without enabling fancy-regex then you'll get the default onig mode.

Note: The fancy-regex engine is absurdly slow in debug mode, because the regex engine (the main hot spot of highlighting) is now in Rust instead of C that's always built with optimizations. Consider using release mode or onig when testing.

Because syntect's API exposes internal cacheable data structures, there is a caching strategy that text editors can use that allows the text on screen to be re-rendered instantaneously regardless of the file size when a change is made after the initial highlight.

Basically, on the initial parse every 1000 lines or so copy the parse state into a side-buffer for that line. When a change is made to the text, because of the way Sublime Text grammars work (and languages in general), only the highlighting after that change can be affected. Thus when a change is made to the text, search backwards in the parse state cache for the last state before the edit, then kick off a background task to start re-highlighting from there. Once the background task highlights past the end of the current editor viewport, render the new changes and continue re-highlighting the rest of the file in the background.

This way from the time the edit happens to the time the new colouring gets rendered in the worst case only 999+length of viewport lines must be re-highlighted. Given the speed of syntect even with a long file and the most complicated syntax and theme this should take less than 100ms. This is enough to re-highlight on every key-stroke of the world's fastest typist in the worst possible case. And you can reduce this asymptotically to the length of the viewport by caching parse states more often, at the cost of more memory.

Any time the file is changed the latest cached state is found, the cache is cleared after that point, and a background job is started. Any already running jobs are stopped because they would be working on old state. This way you can just have one thread dedicated to highlighting that is always doing the most up-to-date work, or sleeping.

Since 3.0, syntect can be used to do parsing/highlighting in parallel. SyntaxSet is both Send and Sync and so can easily be used from multiple threads. It is also Clone, which means you can construct a syntax set and then clone it to use for other threads if you prefer.

Compared to older versions, there's nothing preventing the serialization of a SyntaxSet either. So you can directly deserialize a fully linked SyntaxSet and start using it for parsing/highlighting. Before, it was always necessary to do linking first.

It is worth mentioning that regex compilation is done lazily only when the regexes are actually needed. Once a regex has been compiled, the compiled version is used for all threads after that. Note that this is done using interior mutability, so if multiple threads happen to encounter the same uncompiled regex at the same time, compiling might happen multiple times. After that, one of the compiled regexes will be used. When a SyntaxSet is cloned, the regexes in the cloned set will need to be recompiled currently.

For adding parallelism to a previously single-threaded program, the recommended thread pooling is rayon. However, if you're working in an already-threaded context where there might be more threads than you want (such as writing a handler for an Iron request), the recommendation is to force all highlighting to be done within a fixed-size thread pool using rust-scoped-pool. An example of the former is in examples/parsyncat.rs.

There's a number of examples of programs that use syntect in the examples folder and some code outside the repo:

Here's that stats that synstats extracts from syntect's codebase (not including examples and test data) as of this commit:

Below is a list of projects using Syntect, in approximate order by how long they've been using syntect (feel free to send PRs to add to this list):

Thanks to Robin Stocker, Keith Hall and Martin Nordholts for making awesome substantial contributions of the most important impressive improvements syntect has had post-v1.0! They deserve lots of credit for where syntect is today. For example @robinst implemented fancy-regex support and a massive refactor to enable parallel highlighting using an arena. @keith-hall found and fixed many bugs and implemented Sublime syntax test support.

Thanks to Textmate 2 and @defuz's sublimate for the existing open source code I used as inspiration and in the case of sublimate's tmTheme loader, copy-pasted. All code (including defuz's sublimate code) is released under the MIT license.