Track orbiting objects (such as the International Space Station) in your terminal! 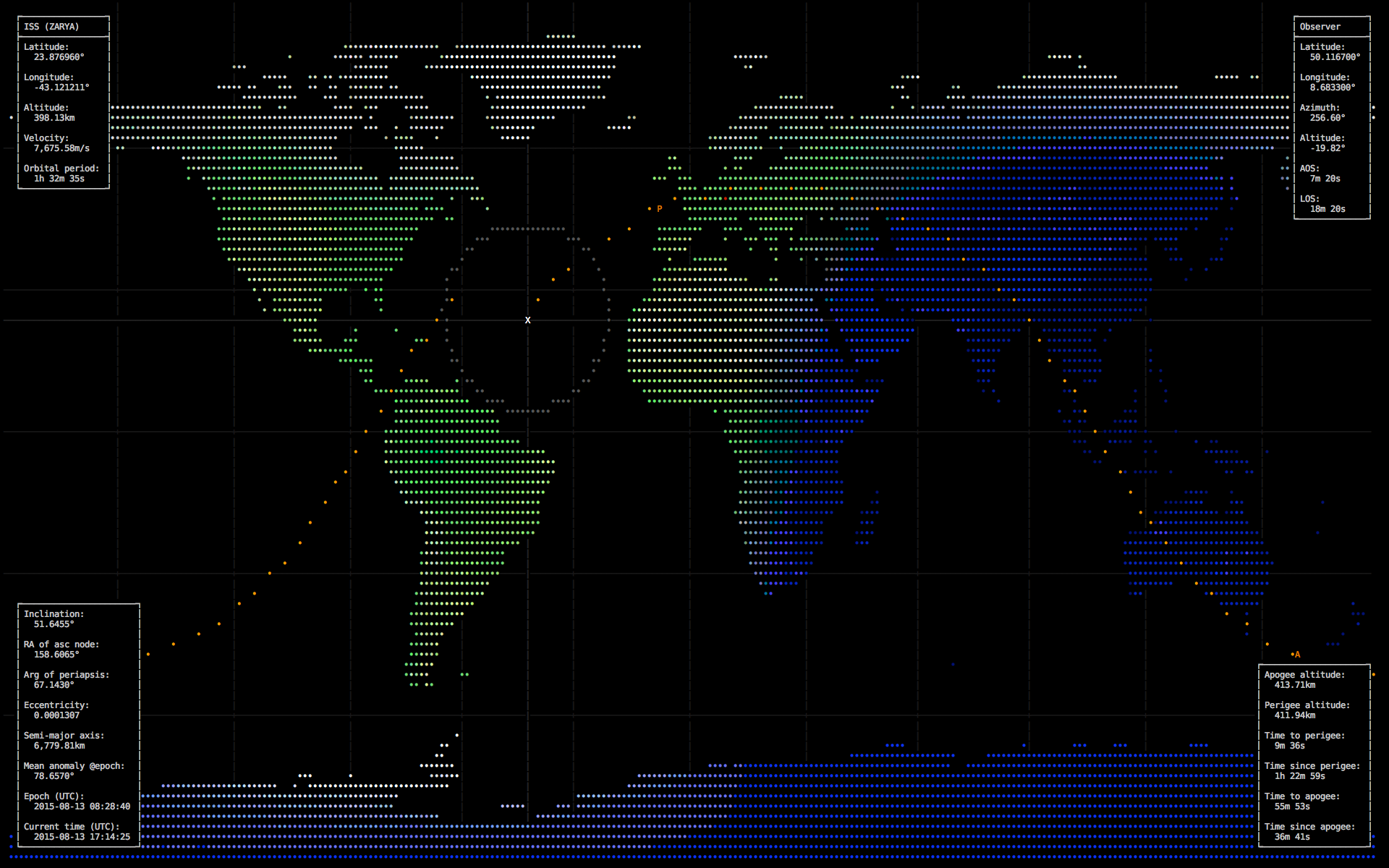 Requires Python 3.3+ and a terminal with 256 colors. A black background is highly recommended.

Credit goes to vain/asciiworld for inspiration and some tasty pieces of code.

To draw the map, TermTrack will look at a shapefile from Natural Earth in order to find coordinates that are within a landmass. While computationally expensive, this method yields the most accurate and good-looking maps at all terminal sizes. To determine the color of each pixel, a relatively low-resolution and low-quality JPEG image is used. If you look at the image (termtrack/data/earth.jpg), you'll notice it has green oceans. This is to ensure that ocean blue will not spill over into coastal areas during downsampling. Same goes for the expanded white coast of Antarctica. Finally, the image has been tuned to produce good-looking colors against a black background. The resolution and quality of the image is not really a concern since we do not need maximum per-pixel precision to make the Sahara appear yellow. After computing land/ocean status and land color, this information is cached in ~/.termtrack_map_cache, so it will not have to be rendered again for the current terminal size.

For Mars and the Moon there is no shapefile to read and the entire area is colored according to similar JPEG color maps.

Night shading for each pixel is done by looking at the Sun's elevation (as computed by pyephem) and shifting the color of the pixel towards blue accordingly. Twilight starts when the Sun is 18 below the horizon (astronomical twilight) and ends when it has risen to 0.

Satellite locations are derived from TLE data downloaded from CelesTrak. The data is fed into pyephem where the current position of the satellite is computed using SGP4. Most of the data you see in the info panels is provided by pyephem, but the apsides' locations as well as the satellite footprint outline are computed by TermTrack itself.

When looking at the ISS, you may notice some inconsistencies:

Where do these errors come from? The locations of the apsides are derived from the true anomaly which matches values from http://www.satellite-calculations.com/TLETracker/SatTracker.htm so I'm assuming that's not the source of the error. The shape of the Earth also does not explain the deviations in altitude.

Interestingly enough, when you look at more eccentric orbits like that of QZS-1 (37158) the errors seem to disappear, suggesting that the issue is merely inaccuracy instead of a plain wrong calculation somewhere.