There are lots of great resources on React out there. What might be missing is some projects mixing real world constraints like:

The hard part is often to be able to put all those together. This is the goal of this project: provide a well-documented example of a front-end app with real-world features and constraints.

📔 Read the blog post where I explain why I made the project.

📺 Watch the video of the talk 🇫🇷

What this project is not

This project was bootstrapped with create-react-app.

The whole README from create-react-app is available here.

Here's a list of some of the technologies I'm using:

🗒 Read the notes I took along the way.

Checkout API proxy for development to understand how the API servers are served in development mode.

Will build the a production version of the website in the build folder.

Once you've built you're app, you can test the build on a local server with:

The following command will run both unit and e2e (cypress) tests.

Check out Error npm test on MacOs Sierra if you're experimenting some troubles.

You can choose to run them separately.

I'm using Jest as a test runner and enzyme / react-testing-library as testing utilies.

Check out Error npm test on MacOs Sierra if you're experimenting some troubles.

End-to-end testing is a technique used to test whether the flow of an application right from start to finish is behaving as expected. The purpose of performing end-to-end testing is to identify system dependencies and to ensure that the data integrity is maintained between various system components and systems.

The entire application is tested for critical functionalities such as communicating with the other systems, interfaces, database, network, and other applications.

I'm using cypress.io for the e2e tests. You will find them in cypress/integration. 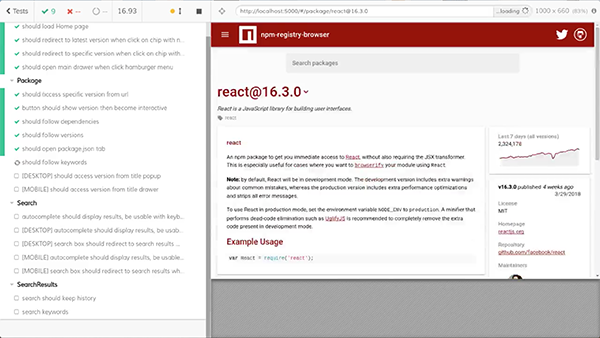 When you add a spec file, reference it in cypress/integration/index.spec.js (specific to my cypress.json config, explained bellow).

Since [email protected], each spec file runs in isolation. The tests took much longer to run.

To speed them up, I decided to run all the files in the same spec (tests don't rely on state of previous state - they could be ran in isolation if needed).

A message is output to explain how to run them in a regular way:

I use eslint to check the coding style, with the following presets:

The following command will run the linter on your code base. This task is ran at pre-commit to ensure code quality.

Prettier is a great tool to enforce a consistent style accross your code base (usefull when working in teams).

Here is how to integrate it with your editor.

Once it's done, when you'll save a file, it will reformat it.

The following command will let you format your code base. This task is ran at pre-commit.

The demo is hosted on github-pages. A simple way to publish your app is to use the gh-pages package that will create a gh-pages orphan branch on which it will commit and push.

The following script will build then publish your app on your github pages:

Each git push triggers a test suite on travis. The following will be ran:

The end to end test sessions are recorded, you can check them here.

On each commit (or PR) pushed to master, if the tests are passing, a version of the website will be automatically deployed from travis to a staging server: https://staging-npm-registry-browser.surge.sh/ (that way, your QA team will be able to test your latest stable features before you release them)

On each tag pushed to master:

To have uniform commit messages, I follow the AngularJS git commit guidelines, please take a look at it.

It also makes it easier to generate changelogs.

Ready to be pasted to the github releases part.

You can test an online demo of the mocked version of the app (open the console to see the mocked requests).

It can be useful when the front-end and back-end teams are developing the same feature at the same time, so as a front-end developer, you don't have to wait for the server to be completed.

It can also be applied once you have a backend to mock your api calls while coding or testing, to have deterministic responses from your http client.

I made a utility based on nock in bin/record-http-mocks.js to automate the recording of the mocks by declaring which urls you want to mock and automatically generate those files.

Specify your config in bin/record-http-mocks.js and

Make a build with mocks

You can even make a mocked build version of the app.

Warning: Like in development, mocked requests will be intercepted (won't go to the server) and you will be shipping mocks (and the code that implements the mocking part) to your bundle.

This could be used for e2e testing purposes.

Online demo of the mocked version of the app

The goal of this project is to focus on how to put the pieces together to make a front-end app, to focus on architecture, not get stuck on webpack configurations 😉.

Toolkits are becoming more popular. Developers are tending to use them or make their own.

Since create-react-app is the most popular toolkit in the react community, I chose this one, with a challenge/constraint: NOT TO EJECT.

What couldn't I do with create-react-app ?

There are some points that I couldn't address with an unejected create-react-app:

For those who want to play with webpack configurations, you can access a starter kit I open sourced: topheman/webpack-babel-starter.

Why not use redux ?

People often choose Redux before they need it. “What if our app doesn’t scale without it?” Later, developers frown at the indirection Redux introduced to their code. “Why do I have to touch three files to get a simple feature working?” Why indeed!

People blame Redux, React, functional programming, immutability, and many other things for their woes, and I understand them. It is natural to compare Redux to an approach that doesn’t require “boilerplate” code to update the state, and to conclude that Redux is just complicated. In a way it is, and by design so.

I wanted to show that you don't necessarily need redux to make a web app like this one.

Maybe in further versions, I will add redux while adding other features.

Why use Material UI ?

In every enterprise app, you're using some kind of UI Kit (whether it is homemade or based on libraries like material-ui, semantic-ui or bootstrap).

Working with such a library was part of the constraints I set.

I had never used material-ui, it was the opportunity of testing it (and also test the css-in-js paradigm that I knew of, but never coded with).

Recompose is a "React utility belt for function components and higher-order components" that you're likely to run into if your coding on React projects.

material-ui relies on it, so at least a part of the library is already shipping into the final bundle. That way, i get to show some code you might encounter on other projects.

This project is a work in progress, here are some of the next features I'll be working on: