esp32-wifi-manager is a pure C esp-idf component for ESP32 that enables easy management of wifi networks through a web portal.

esp32-wifi-manager is is an all in one wifi scanner, http server & dns daemon living in the least amount of RAM possible.

esp32-wifi-manager will automatically attempt to re-connect to a previously saved network on boot, and if it cannot find a saved wifi it will start its own access point through which you can manage and connect to wifi networks. Upon a succesful connection, the software will shutdown the access point automatically after some time (1 minute by default).

esp32-wifi-manager compiles with esp-idf 4.2 and above. See Getting Started to guide you through your first setup. 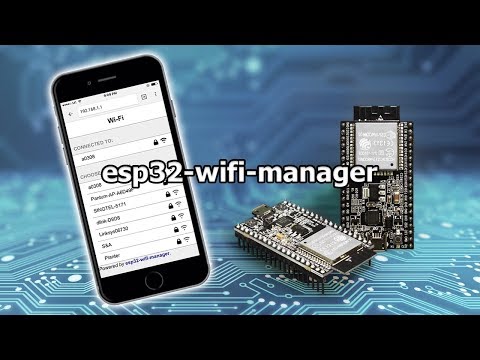 To get you started, esp32-wifi-manager needs:

Clone the repository where you want it to be. If you are unfamiliar with Git, you can use Github Desktop on Windows:

Navigate under the included example:

Compile the code and load it on your esp32:

Note: while it is encouraged to use the newer build system with idf.py and cmake, esp32-wifi-manager still supports the legacy build system. If you are using make on Linux or make using MSYS2 on Windows, you can still use "make build flash monitor" if you prefer

Now, using any wifi capable device, you will see a new wifi access point named esp32. Connect to it using the default password esp32pwd. If the captive portal does not pop up on your device, you can access the wifi manager at its default IP address: http://10.10.0.1.

esp32-wifi-manager can be configured without touching its code. At the project level use:

Navigate in "Component config" then pick "Wifi Manager Configuration". You will be greeted by the following screen:

You can change the ssid and password of the access point at your convenience, but it is highly recommended to keep default values. Your password should be between 8 and 63 characters long, to comply with the WPA2 standard. If the password is set to an empty value or is less than 8 characters long, esp32-wifi-manager will create its access point as an open wifi network.

You can also change the values for various timers, for instance how long it takes for the access point to shutdown once a connection is established (default: 60000). While it could be tempting to set this timer to 0, just be warned that in that case the user will never get the feedback that a connection is succesful. Shutting down the AP will instantly kill the current navigating session on the captive portal.

Finally, you can choose to relocate esp32-wifi-manager to a different URL by changing the default value of "/" to something else, for instance "/wifimanager/". Please note that the trailing slash does matter. This feature is particularly useful in case you want your own webapp to co-exist with esp32-wifi-manager's own web pages.

Adding esp32-wifi-manager to your code

Under eclipse, this is what a typical project looks like:

Once this is done, you need to edit the CMakeLists.txt file at the root of your project to register the components folder. This is done by adding the following line:

If you are using the old build system with make instead, you should edit the Makefile instead such as:

Once this is done, you can now in your user code add the header:

All you need to do now is to call wifi_manager_start(); in your code. See examples/default_demo if you are uncertain.

Interacting with the manager

Ther are effectively three different ways you can embed esp32-wifi-manager with your code:

Event callbacks are the cleanest way to use the wifi manager and that's the recommended way to do it. A typical use-case would be to get notified when wifi manager finally gets a connection to an access point. In order to do this you can simply define a callback function:

Then just register it by calling:

That's it! Now everytime the event is triggered it will call this function. The examples/default_demo contains sample code using callbacks.

The list of possible events you can add a callback to are defined by message_code_t in wifi_manager.h. They are as following:

In practice, keeping track of WM_EVENT_STA_GOT_IP and WM_EVENT_STA_DISCONNECTED is key to know whether or not your esp32 has a connection. The other messages can mostly be ignored in a typical application using esp32-wifi-manager.

Callback signature includes a void* pointer. For most events, this additional parameter is empty and sent as a NULL value. A few select events have additional data which can be leveraged by user code. They are listed below:

These objects are standard esp-idf structures, and are documented as such in the official pages.

The examples/default_demo demonstrates how you can read a ip_event_got_ip_t object to access the IP address assigned to the esp32.

Interacting with the http server

Because esp32-wifi-manager spawns its own http server, you might want to extend this server to serve your own pages in your application. It is possible to do so by registering your own URL handler using the standard esp_http_server signature:

And then registering the handler by doing

esp32-wifi-manager accesses the non-volatile storage to store and loads its configuration into a dedicated namespace "espwifimgr". If you want to make sure there will never be a conflict with concurrent access to the NVS, you can include nvs_sync.h and use calls to nvs_sync_lock and nvs_sync_unlock.

nvs_sync_lock waits for the number of ticks sent to it as a parameter to acquire a mutex. It is recommended to use portMAX_DELAY. In practice, nvs_sync_lock will almost never wait.

esp32-wifi-manager is MIT licensed. As such, it can be included in any project, commercial or not, as long as you retain original copyright. Please make sure to read the license file.