Linux/Ubuntu is not supported! If it works, great. If it doesn't, please don't complain. You may need to install zsh if you don't already have it. That being said, check the Docker section below

Please use GitHub Issues for pull requests or bug reports only. 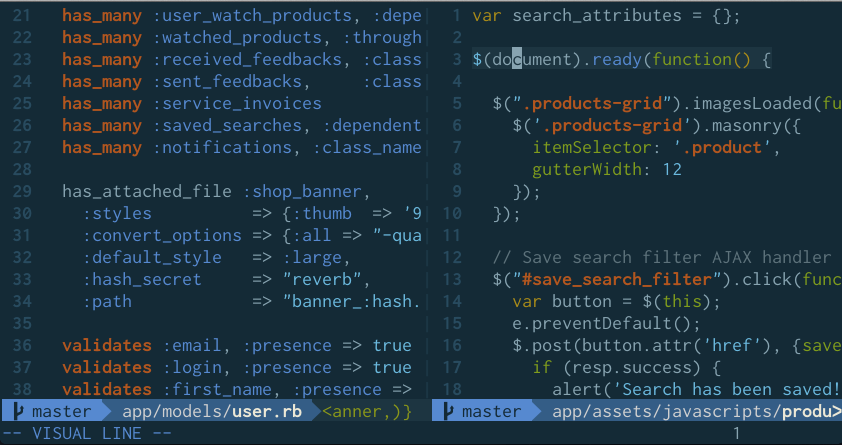 To get started please run:

Note: YADR will automatically install all of its subcomponents. If you want to be asked about each one, use:

Wait, you're not done! Do this:

Remap caps-lock to escape with Karabiner-Elements

The escape key is the single most used key in vim. Old keyboards used to have Escape where Tab is today. Apple keyboards are the worst with their tiny Esc keys. But all this is fixed by remapping Caps to Escape. If you're hitting a small target in the corner, you are slowing yourself down considerably, and probably damaging your hands with repetitive strain injuries.

Set up a system wide hotkey for iTerm (Keys=>Hotkey)

This will give you fast full screen windows that are switchable without switching to spaces.

Same as iTerm. The native spaces navigation slows everything down for no reason.

If you want to run vim in terminal

What's included, and how to customize?

Read on to learn what YADR provides!

Homebrew is the missing package manager for macOS. Installed automatically.

We automatically install a few useful packages including ctags, git, macvim, hub, and the silver searcher ('ag') Note that our autocomplete plugin requires a MacVim that supports Lua. The installer knows how to install it, but if you had one installed before, you may need to manually remove your old MacVim.

Think of Zsh as a more awesome bash without having to learn anything new. Automatic spell correction for your commands, syntax highlighting, and more. We've also provided lots of enhancements:

Lots of things we do every day are done with two or three character mnemonic aliases. Please feel free to edit them:

YADR will take over your ~/.gitconfig, so if you want to store your usernames, please put them into ~/.gitconfig.user

It is recommended to use this file to set your user info. Alternately, you can set the appropriate environment variables in your ~/.secrets.

tmux.conf provides some sane defaults for tmux on Mac OS like a powerful status bar and vim keybindings. You can customize the configuration in ~/.tmux.conf.user.

We include the ghi command. Try ghi list and have fun managing issues from command line!

A list of some of the most useful commands that YADR provides in vim are included below. This is not a comprehensive list. To get deeper knowledge, practice a few of these every day, and then start looking into the lists of plugins above to learn more.

We can use Docker to test some changes in a Linux Container.

This will build the container image if it never built it before (which may take a while -- future times will be faster) and then run a zsh session inside that container for you. There you can play around, test commands, aliases, etc.

Warning: this repo is primarily macOS oriented. So any support for Linux can only be done with the help of the community.

The macOS file is a bash script that sets up sensible defaults for devs and power users under macOS. Read through it before running it. To use:

These hacks are Lion-centric. May not work for other OS'es. My favorite mods include:

Installing terminal vim (with lua) with an RVM managed Ruby can cause the neocomplete plugin to segfault. Try uninstalling vim, then installing with system ruby:

Pry offers a much better out of the box IRB experience with colors, tab completion, and lots of other tricks. You can also use it as an actual debugger by installing pry-nav.

Learn more about YADR's pry customizations and how to install