SiteWhere is an industrial strength, open source IoT Application Enablement Platform which facilitates the ingestion, storage, processing, and integration of IoT device data at massive scale. The platform leverages a microservices architecture which runs on top of cutting-edge technologies such as Kubernetes, Istio, and Kafka in order to scale efficiently to the loads expected in large IoT projects.

SiteWhere embraces a distributed architecture which runs on Kubernetes and provides both infrastructure such as highly-available databases and MQTT brokers as well as microservices to facilitate various aspects of IoT project development. The platform is built with a framework approach using clearly defined APIs so that new technologies may easily be integrated as the IoT ecosystem evolves. 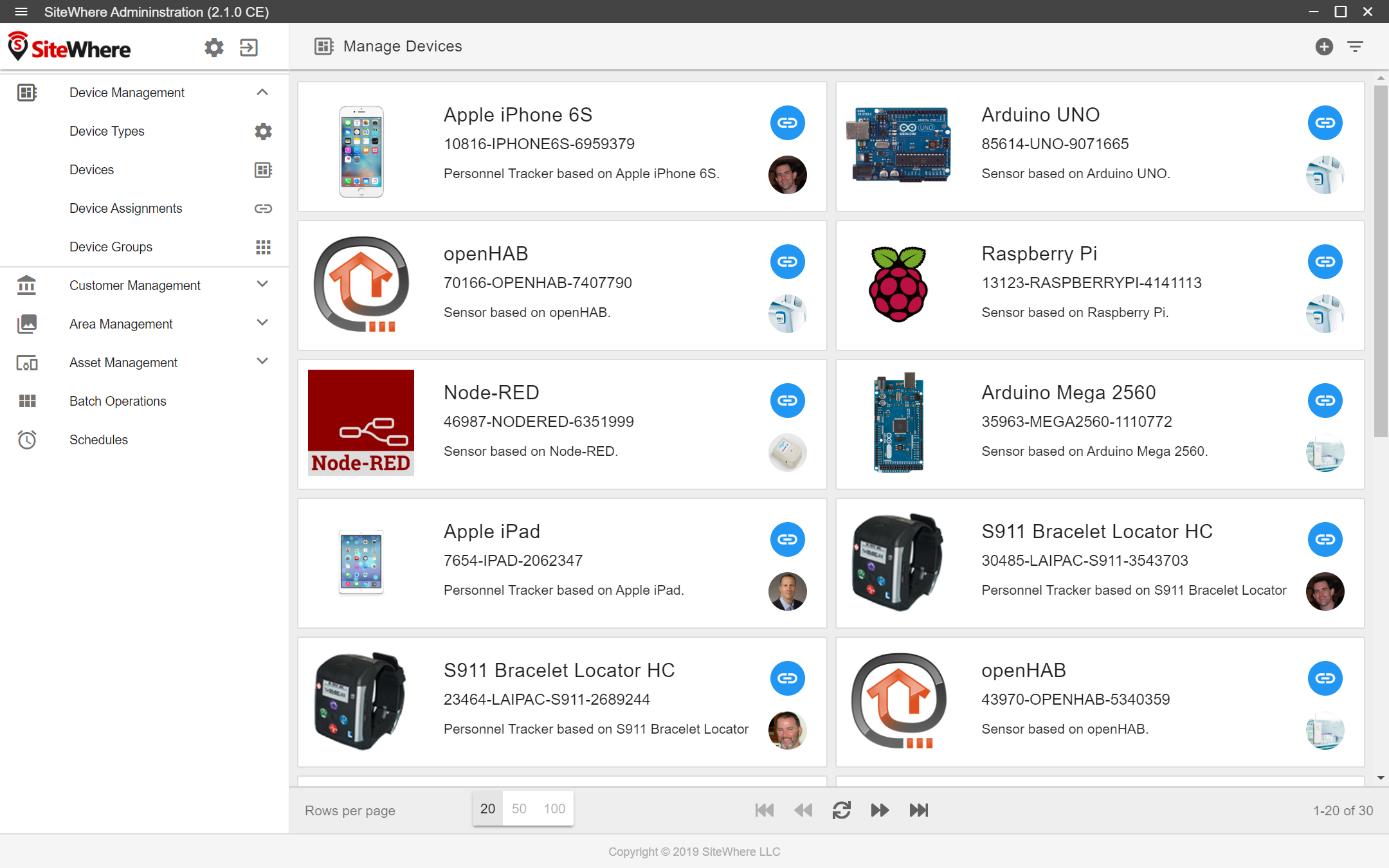 SiteWhere is composed of Java-based microservices which are built as Docker images and deployed to Kubernetes for orchestration. To simplify installation and configuration, Helm is used to provide standard templates for various deployment scenarios. Helm charts are provided to supply both the microservices and the dependencies needed to run a complete SiteWhere deployment. Infrastructure components include technologies such as Apache Zookeeper and Kafka, highly available databases such as MongoDB, InfluxDB, and Cassandra, and other supporting technologies such as MQTT brokers.

Rather than using a monolithic approach, SiteWhere is based on many microservices running as a distributed system. Each microservice is a completely self-contained entity that has its own configuration schema, internal components, data persistence, and interactions with the event processing pipeline. SiteWhere microservices are built on top of a custom microservice framework and run as separate Spring Boot processes, each contained in its own Docker image. 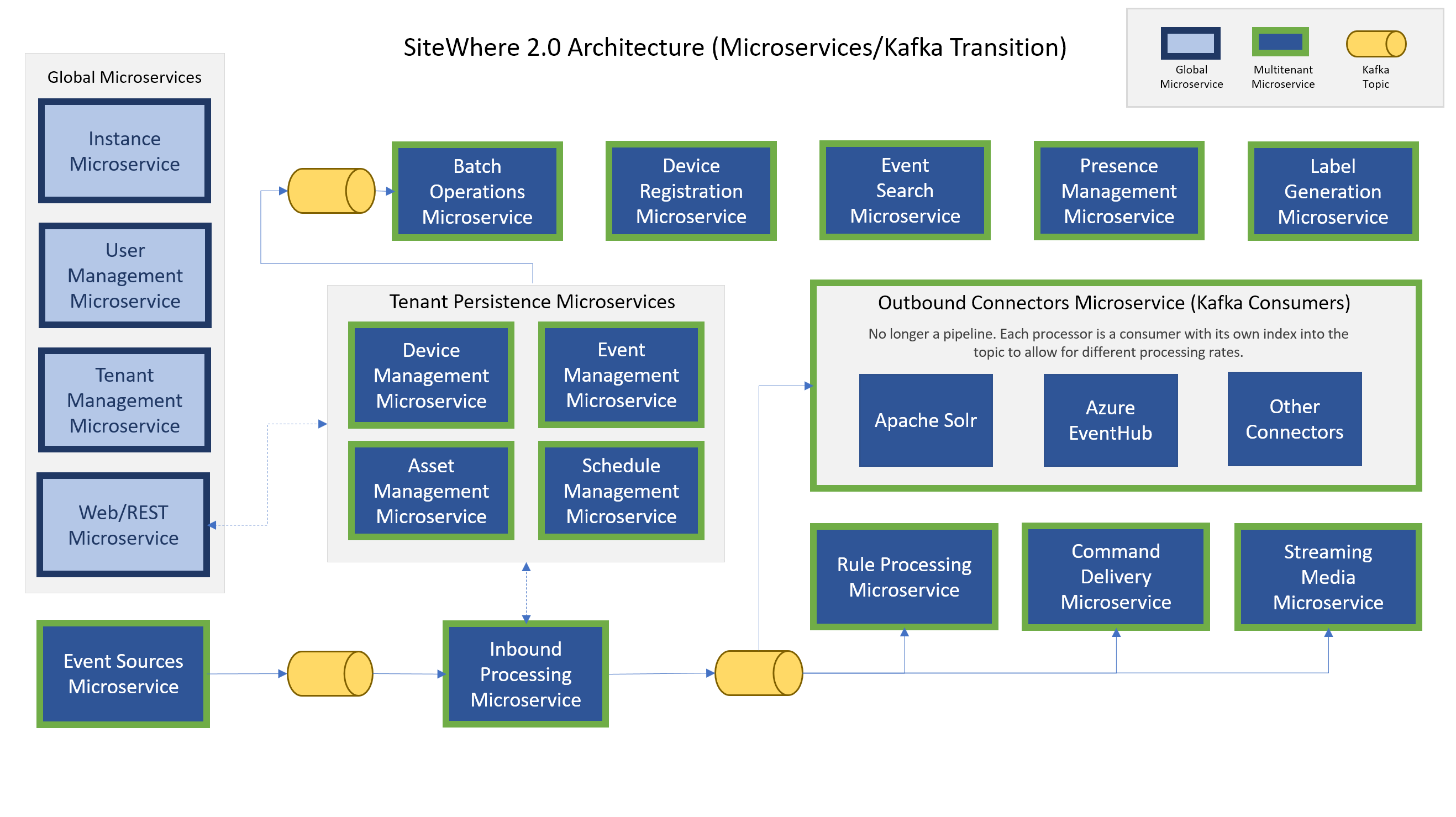 Separating the system logic into microservices allows the interactions between various areas of the system to be more clearly defined. It also allows parts of the pipeline to be shutdown or fail gracefully without preventing other parts of the system from functioning. The event processing pipeline, which spans many of the microservices, is buffered by Kafka so that data processing has strong delivery guarantees while maintaining high throughput.

Scale What You Need. Leave Out What You Don't

The microservice architecture allows individual functional areas of the system to be scaled independently or left out completely. In use cases where REST processing tends to be a bottleneck, multiple REST microservices can be run concurrently to handle the load. Conversely, services such as presence management that may not be required can be left out so that processing power can be dedicated to other aspects of the system.

SiteWhere supports the concept of an instance, which allows the distributed system to act as a cohesive unit with some aspects addressed at the global level. All of the microservices for a single SiteWhere instance must be running on the same Kubernetes infrastucture, though the system may be spread across tens or hundreds of machines to distribute the processing load.

SiteWhere leverages Istio to provide a service mesh for the system microservices, allowing the platform to be scaled dynamically while also providing a great deal of control over how data is routed. Istio allows modern methods such as canary testing and fault injection to be used to provide a more robust and fault-tolerant system. It also allows for detailed monitoring and tracing of the data flowing through the components.

Since many of the system components such as Zookeeper, Kafka, and various databases require access to persistent storage, SiteWhere uses Rook.io within Kubernetes to supply distributed, replicated block storage that is resilient to hardware failures while still offering good performance characteristics. As storage and throughput needs increase over time, new storage devices can be made available dynamically. The underlying Ceph architecture used by Rook.io can handle exobytes of data while allowing data to be resilient to failures at the node, rack, or even datacenter level.

The event processing pipeline in SiteWhere uses Apache Kafka to provide a resilient, high-performance mechanism for progressively processing device event data. Microservices can plug in to key points in the event processing pipeline, reading data from well-known inbound topics, processing data, then sending data to well-known outbound topics. External entites that are interested in data at any point in the pipeline can act as consumers of the SiteWhere topics to use the data as it moves through the system.

The SiteWhere event processing pipeline leverages Kafka's messaging constructs to allow device event data to be processed asynchronously. If a microservice shuts down and no other replicas are available to process the load. The data will be queued until a replica starts and begins processing again. This acts as a guarantee against data loss as data is always backed by Kafka's high-performance storage. SiteWhere microservices leverage Kafka's consumer groups concept to distribute load across multiple consumers and scale processing accordingly.

Using Kafka also has other advantages that are leveraged by SiteWhere. Since all data in the distributed log is stored on disk, it is possible to "replay" the event stream based on previously gathered data. This is extremely valuable for aspects such as debugging processing logic or load testing the system.

While device event data generally flows in a pipeline from microservice to microservice on Kafka topics, there are also API operations that need to occur in real time between the microservices. For instance, device management and event management functions are contained in their own microservices, but are required by many other components of the system. Many of the SiteWhere microservices offer APIs which may be accessed by other microservices to support aspects such as storing persistent data or initiating microservice-specific services.

Using gRPC for a Performance Boost

Rather than solely using REST services based on HTTP 1.x, which tend to have significant connection overhead, SiteWhere uses gRPC to establish a long-lived connection between microservices that need to communicate with each other. Since gRPC uses persistent HTTP2 connections, the overhead for interactions is greatly reduced, allowing for decoupling without a significant performance penalty. Istio also allows the gRPC connections to be multiplexed across multiple replicas of a microservice to scale processing and offer redundancy.

The entire SiteWhere data model has been captured in Google Protocol Buffers format so that it can be used within GRPC services. All of the SiteWhere APIs are exposed directly as gRPC services as well, allowing for high-performance, low-latency access to all API functions. The REST APIs are still made available via the Web/REST microservice (acting as an API gateway), but they use the gRPC APIs underneath to provide a consistent approach to accessing data.

SiteWhere is designed for large-scale IoT projects which may involve many system tenants sharing a single SiteWhere instance. A key differentiator for SiteWhere compared to most IoT platforms is that each tenant runs in isolation from other tenants. By default, tenants do not share database resources or pipeline processing and have a completely separate configuration lifecycles. With this approach, each tenant may use its own database technologies, external integrations, and other configuration options. Parts of the tenant's processing pipeline may be reconfigured/restarted without causing an interruption to other tenants.

An important consequence of the way SiteWhere handles multitenancy is that each tenant's data is separated from the data of other tenants. Most platforms that offer multitenancy store data for all tenants in shared tables, differentiated only by a tenant id. The shared approach opens up the possibility of one tenant's data corrupting another, which is not an acceptable risk in many IoT deployments. In addition, each tenant has its own processing pipelines, so in-flight data is never co-mingled either.

Having dedicated resources for tenants can be expensive in terms of memory and processing resources, so SiteWhere also offers the concept of customers within each tenant. Customers allow data to be differentiated within a tenant, but without having a separate dedicated database and pipelines. In cases where colocated data is acceptable, the tenant can have any number of customers, which shared the same database and processing pipeline. This allows the best of both worlds in terms of security and scalability.