The Embedded Multicore Building Blocks (EMB²) are an easy to use yet powerful and efficient C/C++ library for the development of parallel applications. EMB² has been specifically designed for embedded systems and the typical requirements that accompany them, such as real-time capability and constraints on memory consumption. As a major advantage, low-level operations are hidden in the library which relieves software developers from the burden of thread management and synchronization. This not only improves productivity of parallel software development, but also results in increased reliability and performance of the applications.

EMB² is independent of the hardware architecture (x86, ARM, ...) and runs on various platforms, from small devices to large systems containing numerous processor cores. It builds on MTAPI, a standardized programming interface for leveraging task parallelism in embedded systems containing symmetric or asymmetric (heterogeneous) multicore processors. A core feature of MTAPI is low-overhead scheduling of fine-grained tasks among the available cores during runtime. Unlike existing libraries, EMB² supports task priorities and affinities, which allows the creation of soft real-time systems. Additionally, the scheduling strategy can be optimized for non-functional requirements such as minimal latency and fairness.

Besides the task scheduler, EMB² provides basic parallel algorithms, concurrent data structures, and skeletons for implementing stream processing applications (see figure below). These building blocks are largely implemented in a non-blocking fashion, thus preventing frequently encountered pitfalls like lock contention, deadlocks, and priority inversion. As another advantage in real-time systems, the algorithms and data structures give certain progress guarantees. For example, wait-free data structures guarantee system-wide progress which means that every operation completes within a finite number of steps independently of any other concurrent operations on the same data structure. 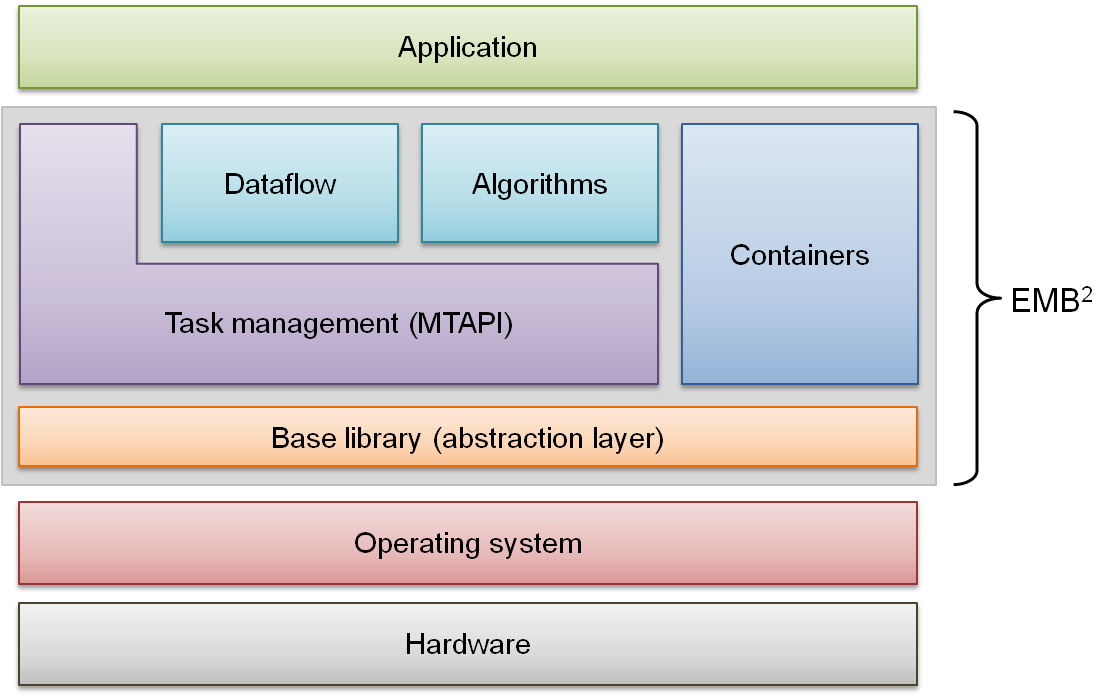 See the file COPYING.md in the project's root directory.

See the file CONTRIBUTING.md in the project's root directory.

It is strongly recommended to build from a release file and not from a repository snapshot in order to get the documentation and the examples out-of-the box. The release files can be found at https://github.com/siemens/embb/releases.

EMB² is regularly built and tested on a variety of OS/compiler/architecture combinations including Linux (x86 and ARM using GCC/Clang) and Windows (x86 using MSVC). Moreover, it has been successfully built and tested on RTEMS and FreeBSD. Other platforms may be supported without any changes to the source code. The included unit tests can be used to find out whether a system not officially supported is suitable to run EMB². If the build process or the unit tests fail on your system, please contact us.

As the next step, compile EMB²:

After compilation has finished, execute the tests:

To generate and invoke the platform-specific build files, open a Developer Command Prompt for Visual Studio and change to the project's root directory. Create a subdirectory, where you want to build the library, e.g., "build", and change to that subdirectory. In the following, it is assumed that the project's root directory is the parent directory. Now you can generate the build files using CMake (a list of supported CMake generators can be displayed by typing cmake --help). For example:

As the next step, compile EMB²:

After compilation has finished, execute the tests:

EMB² provides several options which allow you to configure it to your needs. This section explains these options and describes the build process in more detail.

As mentioned above, it is recommended to build EMB² in a subdirectory such as "build". The actual build files are generated by the following command (a list of available generators can be displayed by typing cmake --help):

Note that on Linux, the architecture (32/64 bit) cannot be selected by the generator. The default is "Unix Makefiles" for which reason -G <generator> may be omitted.

EMB² can be built in Release or Debug mode. The latter contains additional checks during runtime and is only recommended for development purposes. On Linux, the build mode can be specified using the option -DCMAKE_BUILD_TYPE=[Release|Debug], for example:

If no build mode is given, the default (Release) is used. The Visual Studio generators create build files for both modes (the selection is done at build time as described below).

You may choose a custom compiler instead the default one by defining CMAKE_CXX_COMPILER and/or CMAKE_C_COMPILER. For example, to use Clang on Linux, type:

EMB² can be built with C++ exception handling (default) or without exceptions. When exceptions are turned off, a message is emitted in case of an error and the program aborts. To disable exceptions, add the option -DUSE_EXCEPTIONS=OFF.

Similarly, automatic initialization of the task scheduler by the MTAPI C++ interface can be disabled with -DUSE_AUTOMATIC_INITIALIZATION=OFF. This way, unexpected delays after startup can be avoided, e.g. for timing measurements.

EMB² comes with OpenCL and CUDA plugins to support execution on GPUs that may be built by setting -DBUILD_OPENCL_PLUGIN=ON and -DBUILD_CUDA_PLUGIN=ON, respectively. The CUDA build process requires an installed CUDA SDK.

If multiple applications use EMB², it might be desireable to build shared libraries by specifying -DBUILD_SHARED_LIBS=ON.

Furthermore, EMB² can be built to work with threading analysis tools such as Helgrind or ThreadSanitizer with -DTHREADING_ANALYSIS_MODE=ON. This uses mutexes around atomics to avoid false positives and degrades performance significantly.

Warnings can be treated as errors by the option -DWARNINGS_ARE_ERRORS=ON.

The tutorial of EMB² comes with a number of examples in doc/examples/. These can be built using the option -DBUILD_EXAMPLES=ON. Note, however, that the examples use C++11 features and require an appropriate compiler.

The documentation may be built by setting -DBUILD_DOCUMENTATION=ON if Doxygen is installed.

By default, the included unit tests are built as part of the installation process. To override the default behavior, add the option -DBUILD_TESTS=OFF.

As the next step, you can compile the library using the generated build files. On Linux, the build mode (Release|Debug) is already given in the build files, whereas on Windows, it has to be specified now.

For a Linux build, type

For a Windows Release build, type

If you are a developer working on a repository snapshot of EMB², you can build the documentation as follows (provided that you have Doxygen installed):

Note that this is not necessary if you build from a release file.

To check whether EMB² was compiled correctly, run the tests. The test executables are contained in the subfolder "binaries".

The default installation path on Linux is

depending on the target architecture.

If you want a different installation path, you can change it now by typing

To install the files, use the command

which copies the contents of the "install" folder to the "bin", "lib", and "include" folders in the installation path. For the default paths, the installation has to be run with administrator / root privileges.

For some of the components, there exist C and C++ versions, wheras others are only implemented in C++. The directory names are postfixed with either "_cpp" or "_c" for the C++ and C versions, respectively. Currently, EMB² is composed of the following components:

Directory "base_c" contains abstractions for threading, synchronization, atomic operations, and other functionalities. As the name indicates, the code is implemented in C. Directory "base_cpp" contains C++ wrappers around the "base_c" functions. Similarly, the MTAPI task scheduler is available for programs written in C ("mtapi_c") or C++ ("mtapi_cpp"). Heterogeneous and distributed systems are supported via the plugins contained in "mtapi_plugins_c". Directory "algorithms_cpp" provides high-level constructs for typical parallelization tasks in C++, and "dataflow_cpp" generic skeletons for the development of parallel stream-based applications. Finally, "containers_cpp" provides data structures for storing objects in a thread-safe way.

If you want to use the C++ functionalities of EMB², you have to link the following libraries (names will be slightly different on Windows and on Linux) in the given order:

The C++ header files can be included as follows:

If you only want to use the C versions of MTAPI and the base library, link them in the following order:

The C header files can be included as follows:

If you are using CMake for your application, integration of EMB² is easy. After installing EMB², the installation folder contains a CMake folder with a simple finder which is used as follows:

After that, you can link the libraries by name (embb_base_c, embb_mtapi_c, etc.) and the include directories are set up as described above.

If EMB² was not installed to the default directory, you have to specify the directory of the CMake script before using find_package:

The release files of EMB² come with a tutorial, example programs, and a reference manual describing the APIs. All documentation is contained in the "doc" folder. The root document of the reference manual (HTML) is doc/reference/index.html. Note that the generated documentation files are not under version control and hence not contained in the repository. As mentioned above, it is therefore recommended to download one of the packaged release files in order to have ready-to-use documentation.