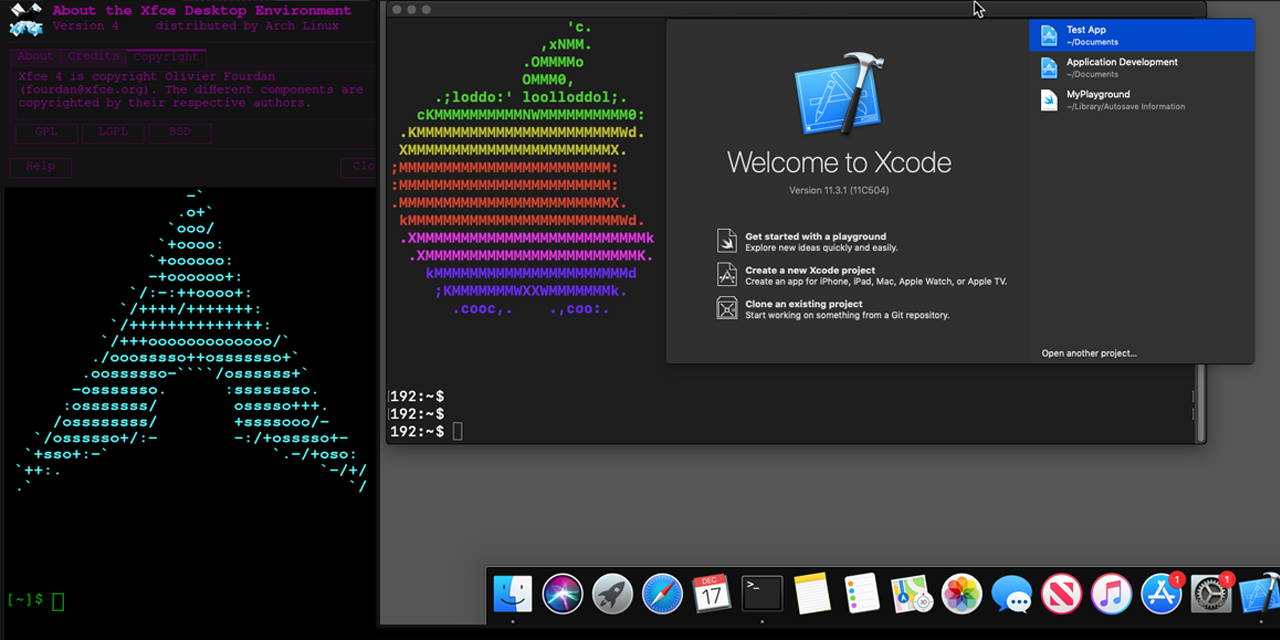 Additionally, comprehensive list of all contributors can be found here: https://github.com/sickcodes/Docker-OSX/graphs/contributors

Special thanks to @kholia for maintaining the upstream project, which Docker-OSX is built on top of: OSX-KVM.

Big thanks to the OpenCore team over at: https://github.com/acidanthera/OpenCorePkg. Their well-maintained bootloader provides much of the great functionality that Docker-OSX users enjoy :)

If you like this project, consider contributing here or upstream!

First time here? try initial setup, otherwise try the instructions below to use either Catalina or Big Sur.

There currently four images, each with different use cases (explained below):

This special set of images was developed by Sick.Codes.

The images (excluding :naked) launch a container with an existing installation with a couple of premade configurations:

Images built on top of the contents of this repository are also available on Docker Hub for convenience: https://hub.docker.com/r/sickcodes/docker-osx

A comprehensive list of the available Docker images and their intended purpose can be found in the Instructions.

Kubernetes Helm Chart & Documentation can be found under the helm directory.

Feel free to open an issue, should you come across minor issues with running Docker-OSX or have any questions.

Before you open an issue, however, please check the closed issues and confirm that you're using the latest version of this repository — your issues may have already been resolved! You might also see your answer in our questions and answers section below.

For more sophisticated endeavours, we offer the following support services:

Docker-OSX is licensed under the GPL v3+. Contributions are welcomed and immensely appreciated. You are in-fact permitted to use Docker-OSX as a tool to create proprietary software.

Other cool Docker/QEMU based projects

If you are serious about Apple Security, and possibly finding 6-figure bug bounties within the Apple Bug Bounty Program, then you're in the right place! Further notes: Is Hackintosh, OSX-KVM, or Docker-OSX legal?

Already set up or just looking to make a container quickly? Check out our quick start or see a bunch more use cases under our container creation examples section.

There are several different Docker-OSX images available which are suitable for different purposes.

Create your personal image using :latest. Then, extract the image. Afterwards, you will be able to duplicate that image and import it to the :naked container, in order to revert the container to a previous state repeatedly.

Before you do anything else, you will need to turn on hardware virtualization in your BIOS. Precisely how will depend on your particular machine (and BIOS), but it should be straightforward.

Then, you'll need QEMU and some other dependencies on your host:

Then, enable libvirt and load the KVM kernel module:

Additional boot instructions for when you are creating your container

This is a great place to start if you are having trouble getting going, especially if you're not that familiar with Docker just yet.

More specific/advanced troubleshooting questions and answers may be found in More Questions and Answers. You should also check out the closed issues. Someone else might have gotten a question like yours answered already even if you can't find it in this document!

Confirm that your CPU supports virtualization

Confirm your user is part of the the Docker group, KVM group, libvirt group

and also add yourself to the kvm and libvirt groups if needed:

Is the docker daemon enabled?

Big thank you to our contributors who have worked out almost every conceivable issue so far!

The big-sur image starts slowly after installation. Is this expected?

Automatic updates are still on in the container's settings. You may wish to turn them off. We have future plans for development around this.

$DISPLAY is the shell variable that refers to your X11 display server.

${DISPLAY} is the same, but allows you to join variables like this:

...because $DISPLAY_ is not $DISPLAY

${variable:-fallback} allows you to set a "fallback" variable to be substituted if $variable is not set.

You can also use ${variable:=fallback} to set that variable (in your current terminal).

In Docker-OSX, we assume, :0.0 is your default $DISPLAY variable.

You can see what yours is

-v is a Docker command-line option that lets you pass a volume to the container.

The directory that we are letting the Docker container use is a X server display socket.

You may when initialising or booting into a container see errors from the (qemu) console of the following form: ALSA lib blahblahblah: (function name) returned error: no such file or directory. These are more or less expected. As long as you are able to boot into the container and everything is working, no reason to worry about these.

Created a container with docker run and want to reuse the underlying image again later?

NB: see container creation examples first for how to get to the point where this is applicable.

This is for when you want to run the SAME container again later. You may need to use docker commit to save your container before you can reuse it. Check if your container is persisted with docker ps --all.

If you don't run this you will have a new image every time.

You can also pull the .img file out of the container, which is stored in /var/lib/docker, and supply it as a runtime argument to the :naked Docker image.

Containers that use sickcodes/docker-osx:auto can be stopped while being started.

You may see one or more libgtk-related errors if you do not have everything set up for hardware virtualisation yet. If you have not yet done so, check out the initial setup section and the routine checks section as you may have missed a setup step or may not have all the needed Docker dependencies ready to go.

If you have not yet set up xhost, try the following:

You cannot allocate more RAM than your machine has. The default is 3 Gigabytes: -e RAM=3.

If you are trying to allocate more RAM to the container than you currently have available, you may see an error like the following: cannot set up guest memory 'pc.ram': Cannot allocate memory. See also: here, here.

For example (below) the buff/cache already contains 20 Gigabytes of allocated RAM:

Clear the buffer and the cache:

Use PulseAudio for sound

Note: AppleALC, alcid and VoodooHDA-OC do not have codec support. However, IORegistryExplorer does show the controller component working.

It's possible to forward additional ports depending on your needs. In this example, we'll use Mac OSX to host nginx:

On the host machine, run:

In a Terminal session running the container, run:

nginx should now be reachable on port 10023.

Additionally, you can string multiple statements together, for example:

You might not need to do anything with the default setup to enable internet connectivity from inside the container. Additionally, curl may work even if ping doesn't.

This is not required for LOCAL installations.

Additionally note it may cause the host to leak your IP, even if you're using a VPN in the container.

Fedora's default firewall settings may prevent Docker's network interface from reaching the internet. In order to reoslve this, you will need to whitelist the interface in your firewall:

Check if your machine has hardware virtualization enabled:

Tips for reducing the size of the image

First make sure autoboot is enabled

Next, you will want to set up SSH to be automatically started.

Make sure to commit the new docker image and save it, or rebuild as described in the section on reducing disk space.

Then run it with these arguments.

What mirrors are appropriate to use to build Docker-OSX locally?

If you are building Docker-OSX locally, you'll probably want to use Arch Linux's mirrors.

Generate serial numbers in ./custom OR make docker generate them at runtime (see below).

At any time, verify your serial number before logging into iCloud, etc.

Getting started with serial numbers

Inside the ./custom folder you will find 4 scripts.

These two files are from OSX-KVM.

You don't need to touch these two files.

The config.plist has 5 values replaced with placeholders. Click here to see those values for no reason.

You can create hundreds, ./custom/generate-unique-machine-values.sh --help

Or if you have some specific serial numbers...

This example generates a random set of serial numbers at runtime, headlessly

This example generates a specific set of serial numbers at runtime

This example generates a specific set of serial numbers at runtime, with your existing image, at 1000x1000 display resolution

If you want to generate serial numbers, either make them at runtime using -e GENERATE_UNIQUE=true \

Or you can generate them inside the ./custom folder. And then use:

To use iMessage or iCloud you need to change 5 values.

ROM is just the lowercased mac address, without : between each word.

I'd like to run Docker-OSX with WSL2 (Windows, Ubuntu)

Ensure KVM is enabled and x11-apps is installed.

The display resolution is controlled by this line:

Instead of mounting that disk, Docker-OSX will generate a new OpenCore.qcow2 by using this one cool trick:

It will take around 30 seconds longer to boot because it needs to make a new boot partition using libguestfs.

Here's a few other resolutions! If you resolution is invalid, it will default to 800x600.

Pass the disk into the container as a volume and then pass the disk again into QEMU command line extras with.

Use the config-custom.plist because you probably want to see the boot menu, otherwise omit the first line:

Firstly, QEMU must be started as root.

It is also potentially possible to accomplish USB passthrough by changing the permissions of the device in the container. See here.

For example, create a new Dockerfile with the following

Where new_image.img is the qcow2 image you extracted. Then rebuild with docker build .

Next we need to find out the bus and port numbers of the USB device we want to pass through to the VM:

In this example, we want to pass through a smartcard device. The device we want is on bus 1 and port 2.

There may also be differences if your device is usb 2.0 (ehci) vs usb 3.0 (xhci). See here for more details.

You should see the device show up when you do system_profiler SPUSBDataType in the MacOS shell.

Important Note: this will cause the host system to lose access to the USB device while the VM is running!

This is my favourite container. You can supply an existing disk image as a Docker command line argument.

The Quick Start command should work out of the box, provided that you keep the following lines. Works in auto & naked machines:

Download the image manually and use it in Docker

This is a particularly good way for downloading the container, in case Docker's CDN (or your connection) happens to be slow.

There's a myriad of other potential use cases that can work perfectly with Docker-OSX, some of which you'll see below!

For a headless container, remove the following two lines from your docker run command:

Building a headless container from a custom image

This is particularly helpful for CI/CD pipelines.

Building a headless container which allows insecure VNC on localhost (!for local use only!)

To exit a container using -i you must docker kill <containerid>. For example, to kill everything, docker ps | xargs docker kill.

NOT TLS/HTTPS Encrypted at all!

(Note: if you close port 5999 and use the SSH tunnel, this becomes secure.)

Building a headless container to run remotely with secure VNC

In the Docker terminal, press enter until you see (qemu).

Or ip n will usually show the container IP first.

Now you can direct connect VNC to any container built with this command!

Optionally, you can enable the SPICE protocol, which allows use of remote-viewer to access your OSX container rather than VNC.

Creating images based on an already configured and set up container

Run the original version of Docker-OSX

Autoboot into OS X after you've installed everything