This project has a successor now, named Noodle: https://github.com/shamansir/noodle, which is very close to be finished and released and, of course, have documentation, like RPD has. Noodle is written in PureScript, the very type-safe and pure functional language and so it is much more reliable and shouldn't cause runtime issues most of the time. It still has FFI to/from JavaScript, though. Another benefit — it can easily be used at server side and so the Networks require no rewriting at all, may be it will even get Terminal renderer at some point.

That way I wasn't supporting this project while I was writing the successor, and I am sorry for that. It should be working, but the features/fixes are freezed for the moment.

(no semantic versioning was used before v2.0)

A video of the engine v0.1.0 in action, demonstrates some of its features: [ Watch ]. 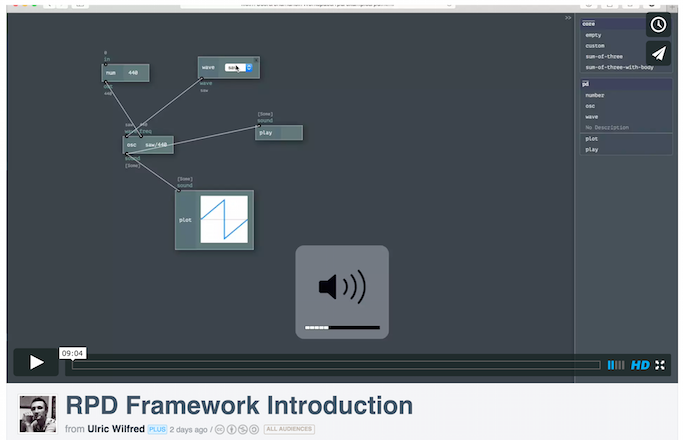 (NB: Only modern browsers are supported, tested most in Chrome and Safari, no mobile support for now)

RPD is a super-minimal plugin-based Vanilla-JS-driven engine for Node-Based User Interfaces, or Flow-Based Programming Intefaces, this concept has a lot of names — namely, the ones like Pure Data, Quartz Composer, Reaktor, NodeBox, VVVV or any Shader/Material Composing View in your favorite 3D Editor.

And when I say minimal, I really mean it. Minimized and gzipped with its standard configuration, it takes no more than 10KB! (*)

(*) Excluding CSS file which usually takes 2-3 KB and Kefir.js requirement, which also usually takes ~10KB, minified and gzipped. Other configurations provided in repository may take from 10 to 20 KB, but users are free to use as many KB as they need.

Moreover, it's built with the help of Reactive programming (thanks to Kefir.js), and this way it allows a programmer to treat and process any data flow as a stream, so:

Will send red and navy values every 500ms to a single color-value inlet in order. It's not the only feature you get with streams, of course, see below for much more.

Here are some GIFs in reduced quality, in addition to a video in rather good quality above, to help you decide if it worths to use this engine or not (also please take a look at code examples below!).

The Engine API provides easy ways to program node networks. Or to define a custom node or a channel type. Even node sets (named toolkits) are enormously easy to build!

Let's switch to some simple examples. Detailed stuff is under the links below.

Constructing a network of nodes:

Even very complex ones:

Here's the engine code at a glance;

RPD provides following features (though probably I forgot a dozen):

Just as a quick note (detailed descriptions are for the pages mentioned above), RPD is available from NPM since latest versions, so just do:

Or, if you plan to run examples locally from node_modules, omit the --no-optional flag.

Feel free to fix issues or do Pull Requests!