This project uses React and CSS to recreate the Facebook Messenger web application. It is in its early stages but most of the building blocks are in place. THIS IS NOT AN OFFICIAL FACEBOOK PRODUCT NOR IS IT MAINTAINED BY ANY FACEBOOK EMPLOYEES. 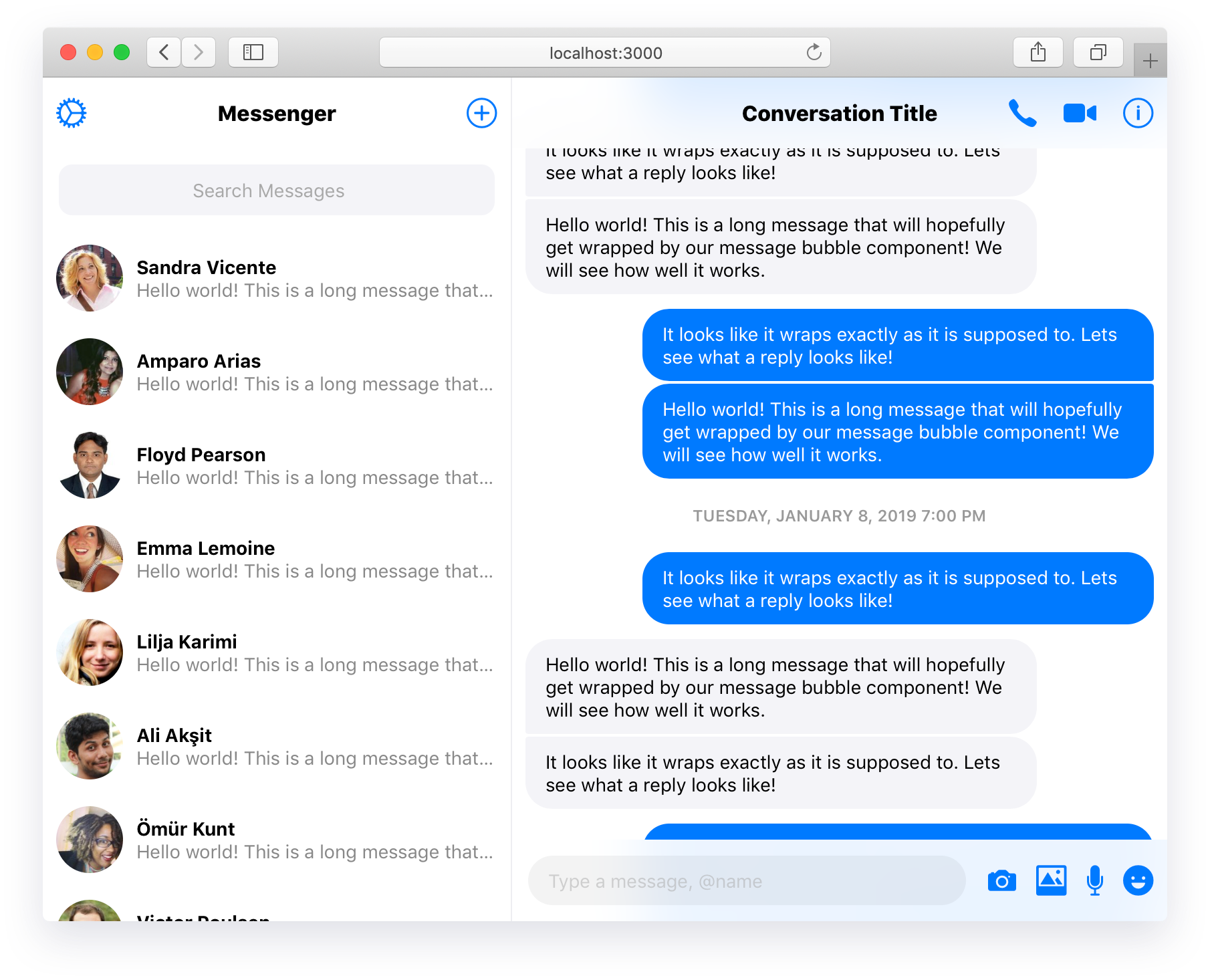 When using these components it is important to keep in mind that we are utilizing a few different dependencies to achieve a better user experience. Specifically:

The Compose component allows the user to send messages and attachments.

This is a simple component that renders ConversationSearch and uses axios to fetch users from the Random User API.

This component provides an overview of a single conversation, including a photo, name (or group title), and a snippet of the most recent message. We use shave to trim the displayed message so that all instances of ConversationListItem take up the same amount of vertical space.

This is a simple input element that is styled to resemble the Facebook Messenger search bar. Its placeholder is centered until the input is focused, moving the placeholder to the left.

Because most of the work is done by MessageList, this component is pretty straight-forward. As stated below, there are a lot of props which allow you to style distinct groups of messages.

This is a deceptively-simple component that does a lot of the heavy lifting for rendering sequences of messages with appropriate styling (see MessageList.renderMessages). Specifically, we use information about the messages (author and timestamp) to render groups of messages closer together with modified border-radii and margin. This is not just present in Facebook Messenger, but in other apps like iMessage as well. You can remove this functionality if you want to.

This component is essentially the wrapper for the web application. It defines a CSS Grid layout and exposes some helper classes (e.g. scrollable, allowing us to separate scrolling between the sidebar and content panes).

The demo uses two toolbars which sit above the sidebar and content panes. This component displays a title and can also include buttons. The title remains centered within the Toolbar regardless of whether elements are present on either side.

Probably better described as an "icon button," it is just that -- a button that shows an icon. I will add accessibility considerations in time.

This is a rather straight-forward library but I do plan to continue making improvements and adding features. If you would like to contribute, you are more than welcome to.

In the project directory, you can run:

Runs the app in the development mode.
Open http://localhost:3000 to view it in the browser.

The page will reload if you make edits.
You will also see any lint errors in the console.

Launches the test runner in the interactive watch mode.
See the section about running tests for more information.

The build is minified and the filenames include the hashes.
Your app is ready to be deployed!

See the section about deployment for more information.

Note: this is a one-way operation. Once you eject, you can’t go back!

If you aren’t satisfied with the build tool and configuration choices, you can eject at any time. This command will remove the single build dependency from your project.

Instead, it will copy all the configuration files and the transitive dependencies (Webpack, Babel, ESLint, etc) right into your project so you have full control over them. All of the commands except eject will still work, but they will point to the copied scripts so you can tweak them. At this point you’re on your own.

You don’t have to ever use eject. The curated feature set is suitable for small and middle deployments, and you shouldn’t feel obligated to use this feature. However we understand that this tool wouldn’t be useful if you couldn’t customize it when you are ready for it.

You can learn more in the Create React App documentation.

To learn React, check out the React documentation.

This section has moved here: https://facebook.github.io/create-react-app/docs/code-splitting

This section has moved here: https://facebook.github.io/create-react-app/docs/analyzing-the-bundle-size

This section has moved here: https://facebook.github.io/create-react-app/docs/making-a-progressive-web-app

This section has moved here: https://facebook.github.io/create-react-app/docs/advanced-configuration

This section has moved here: https://facebook.github.io/create-react-app/docs/deployment

This section has moved here: https://facebook.github.io/create-react-app/docs/troubleshooting#npm-run-build-fails-to-minify

Zuck.js ⭐ 3,280
A javascript library that lets you add stories EVERYWHERE.
dependent packages 1total releases 16most recent commit a year ago

Megadraft ⭐ 1,079
Megadraft is a Rich Text editor built on top of Facebook's Draft.JS featuring a nice default base of components and extensibility
dependent packages 33total releases 98most recent commit 2 months ago