Implementation of Papers on Adversarial Examples

Implementation of papers with real-time visualizations and parameter control.

From one of the first papers on Adversarial examples - Explaining and Harnessing Adversarial Examples,

The direction of perturbation, rather than the specific point in space, matters most. Space is not full of pockets of adversarial examples that finely tile the reals like the rational numbers.

This project examines this idea by testing the robustness of a DNN to randomly generated perturbations.

This code adds to the input image (img) a randomly generated perturbation (vec1) which is subjected to a max norm constraint eps. This adversarial image lies on a hypercube centerd around the original image. To explore a region (a hypersphere) around the adversarial image (img + vec1), we add to it another perturbation (vec2) which is constrained by L2 norm rad.
Pressing keys e and r generates new vec1 and vec2 respectively.

The classifier is robust to these random perturbations even though they have severely degraded the image. Perturbations are clearly noticeable and have significantly higher max norm.

In above images, there is no change in class labels and very small drops in probability.

A properly directed perturbation with max norm as low as 3, which is almost imperceptible, can fool the classifier.

Existence of single pixel adversarial perturbations suggest that the assumption made in Explaining and Harnessing Adversarial Examples that small additive perturbation on the values of many dimensions will accumulate and cause huge change to the output, might not be necessary for explaining why natural images are sensitive to small perturbations.

Each of these settings has a separate Generator trained. This code loads appropriate trained model from saved/ directory based on given arguments. As of now there are 22 Generators for different targets, different bounds (0.2 and 0.3) and target models (only Model_C for now).

Use --help for other arguments available (epochs, batch_size, lr etc.)

Training Target Models (Models A, B and C)

This code supports only MNIST dataset for now. Same notations as in paper are followed (mostly).

There are few changes that have been made for model to work.

These results are for the following settings.

Column index is target label and ground truth images are along diagonal. 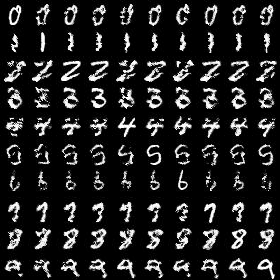