Pome stands for Postgres Metrics. Pome is a PostgreSQL Metrics Dashboard to keep track of the health of your database. This project is at a very early stage and there are a lot of missing features, but I'm hoping to be able to make the project progress quickly. You can read more about the motivation behind Pome here

##How to install Pome

Pome provides pre-built binaries with the releases, but you can also use the Go packaging system:

Then to update Pome:

To install Go, you can follow the Go documentation or use your internal packaging system.

##How to run Pome

The command line provides some help on how to use Pome:

If your database is protected by a password, then you need to pass it as an argument. In the future, Pome will prompt the user for the password (see this issue).

Once Pome is running, you can access the dashboard via your browser and you should see an interface like this: 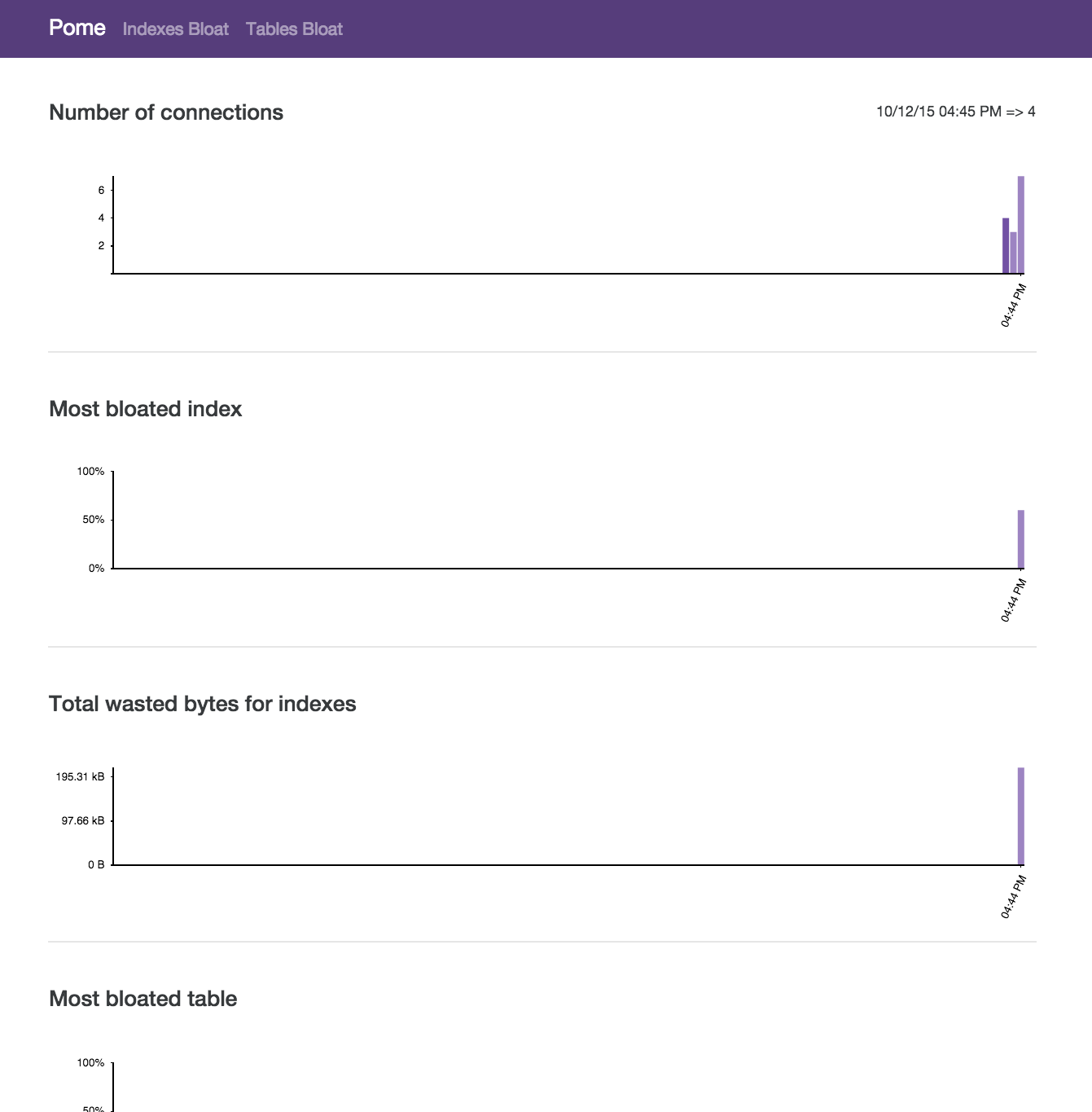 ##Which metrics does Pome provide

There are a lot of other metrics that will be added soon, like:

If you are interested in monitoring CPU, disk IO ... This will need to be done via another tool. Pome will only be collecting data which can be gathered through Postgres

PostgreSQL is incredibly stable, especially with small databases. You too often see databases in the wild without the care of a loving DBA. This can give the illusion that everything is alright even when your database is slowly getting worse. A lot of things can be analyzed within postgres to get a health status but sadly it misses a simple tool to use for less experienced people.

Simplicity, the project aims to be easy to deploy and run. It's why Pome can run as a binary. The project also aims to feel like the psql command and uses common arguments.

Opinionated, Pome has the goal to be pre-configured and analyse commonly useful metrics. We want the project to have sensible defaults. In the future, the tool will allow some level of configuration but without compromising Simplicity.

Batteries Included, Pome is built to be accessed via a web interface. The web app is shipped within the binary and Pome is taking care of serving the assets (HTML, js, CSS). Pome is not built to be a public facing tool so performance in delivering assets was not a concern. It should be possible to run the frontend individually if it's a concern for you. Pome tries to not depend on any dependency which cannot be shipped with the binary and it's one of the reasons why Pome is stateless right now.

What Pome is not and won't be

Pome isn't aiming to be a tool for humongous Postgres instances which are already in the hands of a DBA who can have the time to setup more advanced monitoring tools. Pome won't be an alternative to a more configurable tool like collectd.

##Can I use Pome in Production?

If the database is heavily used then I would avoid it for now until we get more load testing and more configuration options.

The tool has been developed and tested against PG 9.4 and it should be working on the future versions. Pome doesn't have the intent to support older versions because it may require to have different SQL statements for different versions but if there are some requests it will be considered.

Pome is stateless (at least for now) to keep the tool simple. I did consider using few options:

This project had also some learning motivation, as I had never written a Go project and hadn't touched react for a while. I may have made some mistakes or didn't follow some good practices for which I would appreciate some feedbacks.

Otherwise, there are a few tasks which can be done if you want to help

When Pome was only a rough idea, I checked online what already existed and I found a few similar projects which inspired me:

Pome has a different goal from the tools above.

Pome is licensed under Apache V2 license, the full license text can be found here