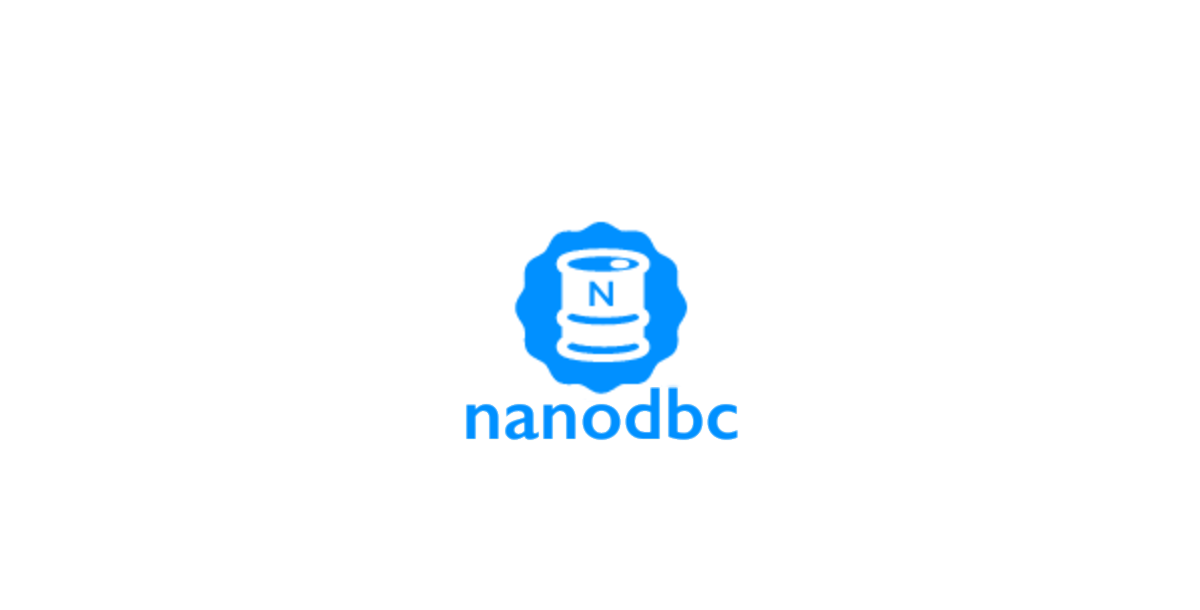 Note: The Coverity status uses the coverity_scan branch. When master has had a significant amount of work pushed to it, merge those changes into coverity_scan as well to keep the status up to date.

The native C API for working with ODBC is exorbitantly verbose, ridiculously complicated, and fantastically brittle. nanodbc addresses these frustrations! The goal for nanodbc is to make developers happy. Common tasks should be easy, requiring concise and simple code.

The latest C++ standards and best practices are enthusiastically incorporated to make the library as future-proof as possible. To accommodate users who can not use the latest and greatest, semantic versioning and release notes will clarify required C++ features and/or standards for particular versions.

All complex objects in nanodbc follow the pimpl (Pointer to IMPLementation) idiom to provide separation between interface and implementation, value semantics, and a clean nanodbc.h header file that includes nothing but standard C++ headers.

nanodbc wraps ODBC code, providing a simpler way to do the same thing. We try to be as featureful as possible, but I can't guarantee you'll never have to write supporting ODBC code. Personally, I have never had to do so.

Major features beyond what's already supported by ODBC are not within the scope of nanodbc. This is where the nano part of nanodbc becomes relevant: This library is as minimal as possible. That means no dependencies beyond standard C++ and typical ODBC headers. No features unsupported by existing ODBC API calls.

nanodbc is intentionally small enough that you can drag and drop the header and implementation files into your project and run with it. For those that want it, I have also provided CMake files which build a library object, or build and run the included tests. The CMake files will also support out of source builds.

Tests use the Catch test framework, and CMake will automatically fetch the latest version of Catch for you at build time. To build the tests you will also need to have either unixODBC or iODBC installed and discoverable by CMake. This is easy on OS X where you can use Homebrew to install unixODBC with brew install unixodbc, or use the system provided iODBC if you have OS X 10.9 or earlier.

The tests attempt to connect to a SQLite database, so you will have to have that and a SQLite ODBC driver installed. At the time of this writing, there happens to be a nice SQLite ODBC driver available from Christian Werner's website, also available via Homebrew as sqliteobdc! The tests expect to find a data source named sqlite on *nix systems and SQLite3 ODBC Driver on Windows systems. For example, your odbcinst.ini file on OS X must have a section like the following.

It's most convenient to create a build directory for an out of source build, but this isn't required. After you've used cmake to generate your Makefiles, make nanodbc will build your shared object. make check will build and run the tests. You can also install nanodbc to your system using make install.

If the tests fail, please don't hesitate to report it by creating an issue with your detailed test log (prepend your make command with env CTEST_OUTPUT_ON_FAILURE=1 to enable verbose output please).

The following build options are available via CMake command-line option -D. If you are not using CMake to build nanodbc, you will need to set the corresponding -D compile define flags yourself.

All boolean options follow the CMake OPTION default value convention: if no initial value is provided, OFF is used.

Use the standard CMake option -DBUILD_SHARED_LIBS=ON to build nanodbc as shared library.

If you need to use the NANODBC_ENABLE_BOOST=ON option, you will have to configure your environment to use Boost.

Continuous integration tests run on Travis-CI. The build platform does not make available a Unicode-enabled iODBC driver. As such there is no guarantee that tests will pass in entirety on a system using iODBC. My recommendation is to use unixODBC. If you must use iODBC, consider disabling unicode mode to avoid wchar_t issues.

clang-format handles all C++ code formatting for nanodbc. This utility is brew-installable on OS X (brew install clang-format) and is available on all major platforms. See our .clang-format configuration file for details on the style. The script utility/style.sh formats all code in the repository automatically. To run clang-format on a single file use the following.

Source level documentation provided via GitHub's gh-pages is available at nanodbc.io. To re-build and update it, preform the following steps from the doc/README.md file.

To get up and running with nanodbc as fast as possible consider using the provided Dockerfile and docker-compose.yml or Vagrantfile.

For example, to spin up a docker container suitable for testing and development of nanodbc:

Or, spin up the complete multi-container environment with database services:

Or, to build and ssh into a vagrant VM (using VirtualBox for example) use:

One of important objectives is to maintain nanodbc covered with tests. New contributions submitted via Pull Requests must include corresponding tests. This is important to ensure the quality of new features.

The good news is that adding tests is easy!

If a feature requires a database-specific test case for each database, then skip the tests/base_test_fixture.h step and write a dedicated test case directly in tests/<database>_test.cpp file.

Once your local master branch is ready for publishing (i.e. semantic versioning), use the utility/publish.sh script. This script bumps the major, minor, or patch version, then updates the repository's VERSION.txt file, adds a "Preparing" commit, and creates git tags appropriately. For example to make a minor update you would run ./utility/publish.sh minor. Review files of CMake configuration, documentation and Sphinx configuration, and update version number wherever necessary.

Important: Always update CHANGELOG.md with information about new changes, bug fixes, and features when making a new release. Use the ./utility/changes.sh script to aid in your composition of this document. The publish script itself will attempt to verify that the changelog file has been properly updated.

Finally, announce the new release to the public.

Good to Have / Want Someday